Various surveys have highlighted the many hurdles still standing in the way of UK drivers making the switch to electric cars.

High upfront cost, a lack of charging infrastructure, comparably stingy government incentives and range anxiety are among them.

As is the lifespan of the batteries and cost to replace them if they degrade.

But according to a recent US study of Tesla battery performance, each year of use and repeat charges results in just a 1 per cent loss in capacity, suggesting a Model 3, Model S or Model X purchased today will have 90 per cent battery efficiency by 2030.

How long? A new US study claims Tesla batteries only deteriorate in capacity by 1% each year 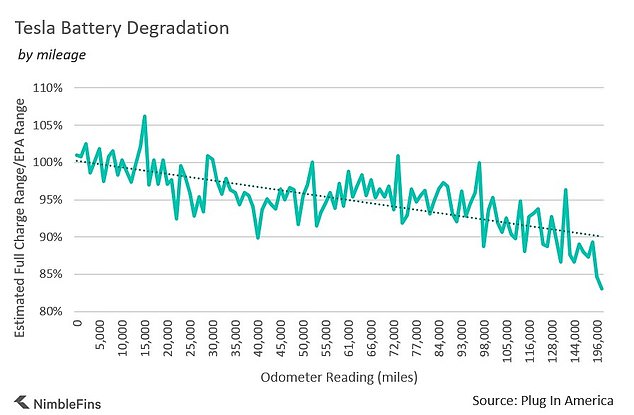 Demand for electric vehicles – on the face of things – is currently surging.

However, despite this recent uptake, pure electric models still only represent 1.5 per cent of all new cars that have hit the road this year as concerns – and lack of supply – continue to restrict sales.

One major issues is – and has always been – the longevity of electric car batteries and the cost to replace them.

But drivers shouldn’t be as concerned as they are about replacing expensive battery packs, a new US report says.

The research, carried out by Plug In America and analysed by NimbleFins, reviewed the condition of a typical Tesla Model S battery. 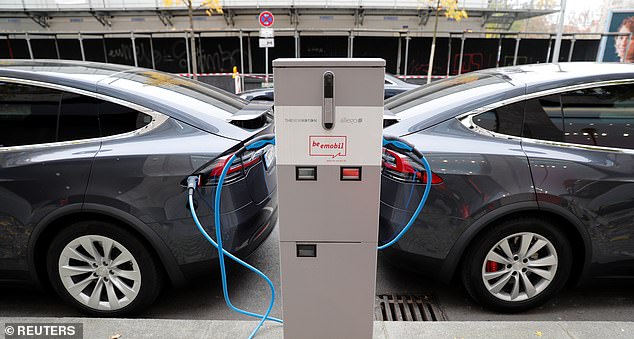 The study surveyed the battery capacities of around 500 Tesla models in the US, working out their age, mileage and range after periods of ownership 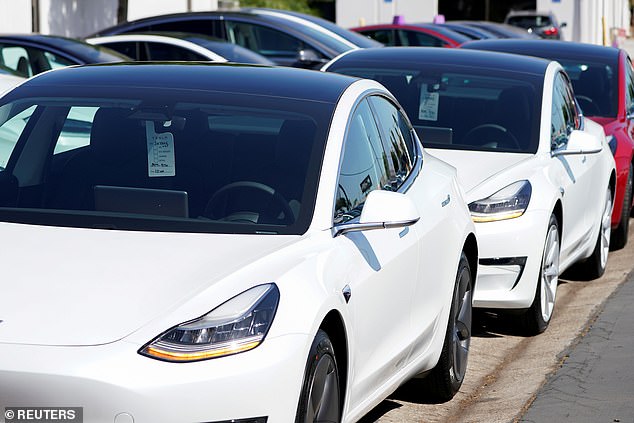 The research reveals that the average Tesla Model S battery provides more than 90 per cent of its original range up until around 150,000 miles 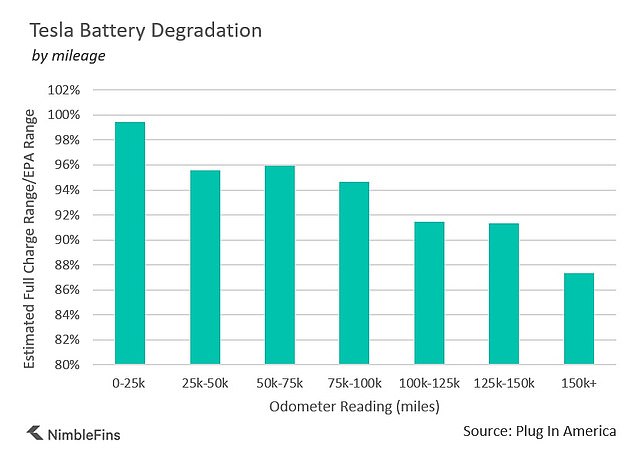 To review the condition of batteries, researchers downloaded owner-submitted information for around 500 Tesla Model S cars.

This also included the purchase date, battery size, EPA (Environmental Protection Agency) range and, for the date of submission, the odometer reading.

It had to use both full-range and partial-range estimates to take into account that some owners do not charge the vehicle’s battery to 100 per cent capacity.

Jaguar I-Pace gets an extra 12 miles of range

Owners of Jaguar I-Pace models will get more range from their electric SUVS – and it’s all thanks to the brand’s single-make race series.

Data obtained from the first season of the I-Pace eTrophy – a support series for the Formula E championship – found that the car’s performance could be improved.

The minor tweak adds an extra 12 miles to the I-Pace’s range.

New models from now will have the software already installed while existing owners can visit their local dealer to have the upgrade for free.

The marginal adjustments to car’s battery, cooling system and energy recovery system have increased its efficiency by eight per cent under everyday driving conditions, Jaguar claims.

The study found that battery degradation is impact by the number of charges it endures and higher mileage models – which would have been plugged in more often – had reduced capacities.

The research reveals that the average Tesla Model S battery provides more than 90 per cent of its original range up until around 150,000 miles.

However, beyond that mileage the range starts to noticeably drop off.

NimbleFin’s report said: ‘It’s interesting to see that a car with unusually high mileage for the age (over 143,000 miles for a car less than 5 years old) has more significant battery deterioration than a typical car of the same age.

‘This shows that mileage is also a considerable factor in how quickly a battery deteriorates—this makes sense, as more miles driven means more charge cycles, and it’s mostly the charge cycles that reduce a battery’s usable capacity.’

This isn’t likely an issue for a UK driver, though.

With the average motorists mileage being 7,600 miles, an owner wouldn’t notice a cliff-edge deterioration in battery capacity until they’d owned a Tesla for almost 20 years.

A vast proportion of cars with conventional engines are scrapped when they reach the milestone of two decades.

The vehicle with the highest mileage of all in the survey sample was a Model S 85P with 232,442 miles on the clock.

Even after that duration of ownership, mileage and recharges, it was found to still be able to cover 220 miles on a single charge, which works out at 83 per cent of its original 265-mile range. 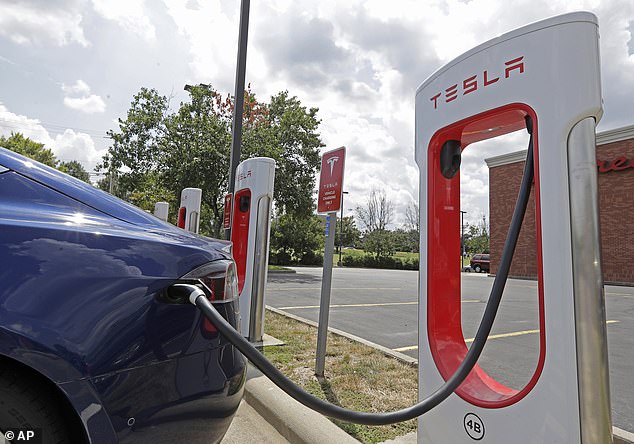 The vehicle with the highest mileage of all in the survey sample was a Model S 85P with 232,442 miles on the clock – its batteries were at 83% capacity 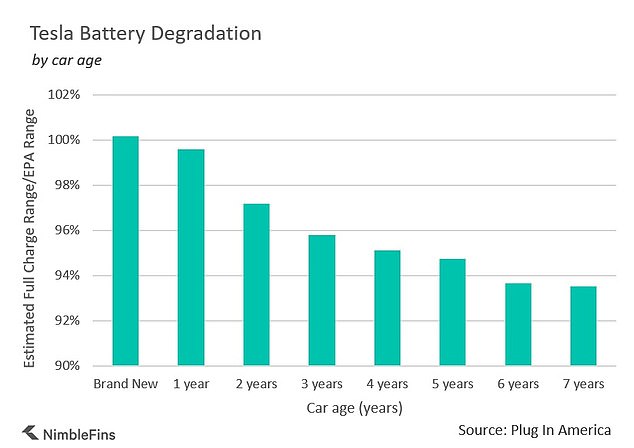 Unfortunately, the study only looked at the lifespan of Tesla batteries.

That said, other manufacturers’ warranties suggest battery capacity shouldn’t be an issue for the first average decade of ownership.

For instance, Nissan’s Leaf comes with eight-year 100,000 cover for the batteries while the Hyundai Kona Electric warranty is for eight years or 125,000 miles of usage.

If batteries are found to have dropped below a certain performance level, the manufacturer is responsible to replace it with a new one at no cost.

By Miles, a pay-by-mile car insurance provider, has announced the launch of the world’s first connected car insurance policy available to Tesla owners.

It takes information directly from Teslas and uses information about the distance covered – but not the way the car is driven – to price insurance.

It is the first car insurance policy in the world to take data directly from the car without any ‘black box’ GPS tracking device.

The insurer claims any motorists doing less than 7,000 miles a year will save money on premiums by using the service.

Tesla owners have limited options when it comes to getting insured, and premiums are expensive due to the high cost associated with repairing cars or writing off vehicles due to damage to the batteries in a collision.

This has seen annual quotes from major providers reach prices of more than £2,000 for the Model 3, which is the most affordable Tesla available.