Struggling to find her own place in a family grieving the loss of a mother and wife almost tore Kate Ferdinand apart from her husband Rio. In their most searingly honest interview, the couple reveal how straight talking saved their relationship

Kate Ferdinand’s eyes are brimming with tears. She’s discussing her struggle going from bubbly, bikini-clad reality star of The Only Way Is Essex to trying to be the ‘perfect wife’ to footballing legend Rio Ferdinand and stepmum to his three children after their beloved mother Rebecca died from breast cancer.

The 28-year-old married Rio on a beach in Turkey last September but there was a point when their relationship almost fell apart as a result of his all-consuming grief.

Sitting on a sofa at the You photoshoot, Kate is make-up free and unexpectedly vulnerable as she clutches a fluffy blanket to her chest – a far cry from the perma-tanned blonde who burst on to our TV screens five years ago on the reality show. Former Manchester United and England ace Rio, 41, sits at her side, looking almost helpless, but he is listening intently to every word she says.

‘I cried every single day for a year when I first moved in with Rio,’ she says. ‘It was an incredibly difficult time because his mum Janice passed away [of cancer in 2017] just two years after they had lost Rebecca. My heart was breaking for them. All I wanted to do was try to fix him, make the kids happy and be as kind and supportive as I could. I gave up my job. I wanted to do everything right. But I didn’t know how to cook. I kept getting things wrong, like forgetting to put a gym kit in a school bag or missing an email from one of the kids’ teachers. And I would get into a total state because I felt I was messing up in front of so many people who didn’t want me there. I wasn’t a mum. I wasn’t really used to being around kids, but I knew I would do anything for them. 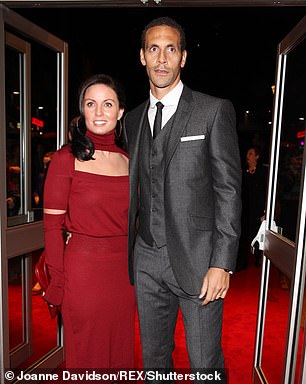 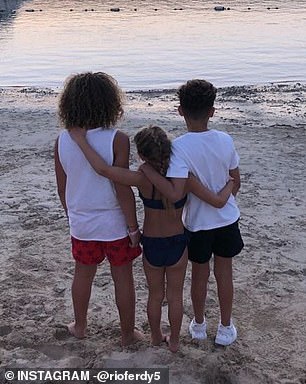 Left: Rio with his first wife Rebecca, who died of breast cancer in 2015, Right: The couple’s children: Lorenz, Tia and Tate

‘I lost myself. I felt as though I was acting all the time, trying to smile and learn to cook and be this perfect woman. I tried to talk to Rio but it sounded like I was moaning when he had much bigger problems to deal with. So I’d go to our bedroom and cry.’

Rio nods. ‘I remember her trying to talk to me but I was never really listening to her,’ he says bluntly. ‘I’d be thinking: “What are you going on about? I have three kids who have lost their mother and their grandmother. I had lost my wife and my mother. What does it matter that you forgot something about the kids’ school?” I wanted her there but I couldn’t see how difficult it was for her because I was so locked into my own grief. She was way down my list of priorities.’

We are sitting in a small room surrounded by PRs and assistants, but there is absolute silence as the couple speak. Kate confesses that at one point she upped and left, returning to her ‘little flat in Essex’ because she was so low. Rio stares at her then puts out his hand to stroke her thigh. It seems intrusively intimate to witness this football hero opening up about his emotions; to see looks of confusion and sadness flit over his face.

There is a reason he and Kate are talking so openly. It is almost three years since his Bafta-winning documentary Being Mum And Dad, which centred on his grief at losing Rebecca, mother of their three children Lorenz, now 13, Tate, 11, and Tia, eight. And now Rio and Kate will appear in a second BBC One documentary – Rio And Kate: Becoming A Step Family. ‘I never planned to do another one,’ he says. ‘But that first documentary helped me through the hardest time in my life and enabled me to make sense of it.

‘I kept in touch with the documentary makers, and one of them asked me how it was going with Kate. I told her she was struggling. I realised that if I wanted to make it work, we needed help. And doing another documentary could help us by finding answers and seeing how other people who have been through this have coped.’ He looks up. ‘I knew I’d never be able to deal with this myself.’

The documentary – like the previous one – is raw, honest and unguarded. Beneath the idyllic settings of the couple’s palatial homes in Kent and Portugal, it portrays the struggle of an increasingly insecure woman, Kate, trying to find her place within this family while dealing with everyone’s grief, sort out their daily lives and uphold the legacy of the children’s late mother.

It’s been a tumultuous three years since Rio first caught a glimpse of Kate while they were both holidaying separately in Dubai. ‘I looked across and saw this girl eating a burger,’ he says, and laughs. ‘I don’t know what it was but she made me smile and I saw she was with someone I knew and we got talking. Then I went back to my family. The next morning, I woke up and the first thing I thought was, “I want to text her.” It shocked me because I had it set in my head that my future was just me and the kids and my work. I thought I would never feel ready to move on, but I wanted to see this girl again, talk to her. She got into my head.’ 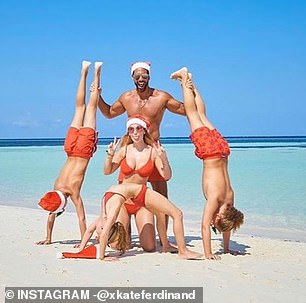 Kate, Rio and the children having Christmas fun in the sun

They both admit things moved swiftly, although every step of the way Rio made sure that his children were on board. ‘The first time they met her was as part of a group round at our house,’ he says. ‘The kids all liked her. A few days later I asked them if they thought I should ask her out. The boys told me she’d never go out with me because I was too old. But they were pleased when we went on a date.’ Rio also included his children in choosing the ring when he proposed in Abu Dhabi nearly two years after they met. ‘The kids were jumping up and down when she said “yes”,’ he smiles. ‘I thought everyone was happy for us. Initially everyone said they were.’

‘But once I moved in, things changed,’ says Kate. ‘And I wasn’t expecting that. Neither of us was. That’s when it got hard.’ There was, they both admit, resistance from both sides of the family. In the documentary, Rio’s father Julian admits he had his reservations.

Kate also had to adapt to getting along with his household staff. ‘If it was just me, Rio and the kids, everything was fine,’ she says. ‘But I had to fit in with everyone. It was silly little things that would get me down. I felt as though I was being watched and judged all the time. When I’d cook something, someone would say, “Rebecca didn’t do it like that,” and I’d smile but inside I’d feel crushed. I wanted to say, “Tell me how she did it, so I can get it right.” I was trying so hard to please, I wasn’t being myself. 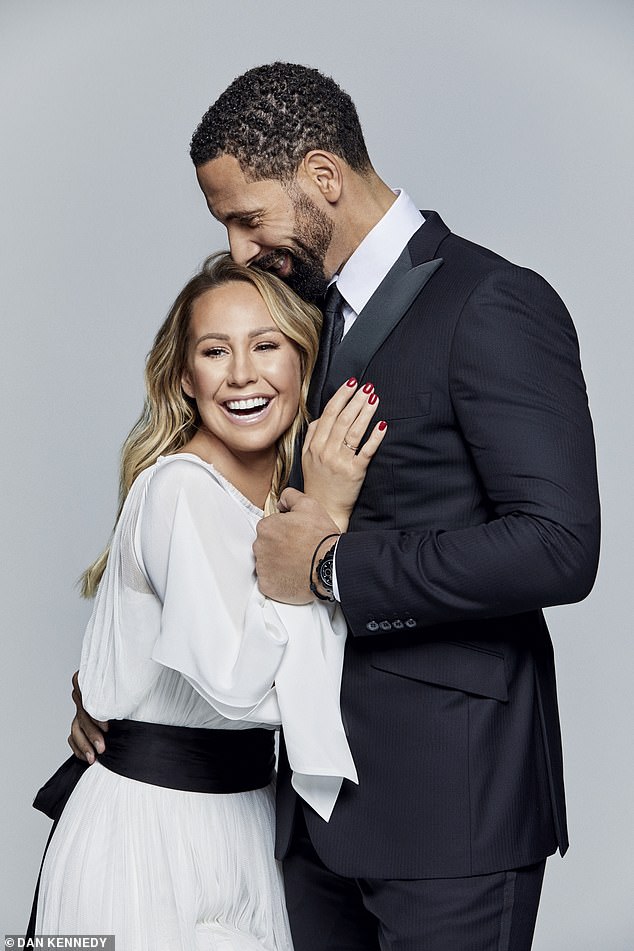 ‘My friends would call but I didn’t want to speak to anyone. Nothing in the house was mine; everyone called it “Rio’s house”. All the photographs were of Rebecca and the children. I had no place. I remember after six months becoming obsessed with wanting the Molton Brown Rhubarb & Rose soap that I always have at home, just to have a smell I knew. I bought a bottle and put it downstairs but it got taken away. As stupid as it sounds, that crushed me, but what was making me feel more isolated was if I said these things out loud people would think I was pathetic and selfish.’

Making the documentary, Kate says, was a relationship-saver. She realised it was OK to make mistakes, and that – when the time was right – it was perfectly acceptable to make changes to the family home. She redecorated the kitchen, rearranged the cutlery drawers and created a beautiful room where all photos and mementoes of Rebecca and Janice were kept. She encouraged the kids to go to group therapy sessions with other children who had lost a parent and who now had a step-parent. She and Rio sat in on sessions with other widows and widowers who had remarried and had their own issues. Molton Brown Rhubarb & Rose soap is now sweetly ensconced in every bathroom.

‘I was frightened of doing the documentary,’ she says, ‘and I was a nightmare when we were doing it as I felt so vulnerable. But it really helped because it made us all talk.’

Her relationship with her father-in-law is blossoming – despite her insisting he calls before he comes to the house rather than letting himself in with his own key whenever he wants – and she and Rio have also been to counselling with Rebecca’s family.

‘Things are good now,’ says Rio. ‘We didn’t appreciate that so many problems are caused because people are scared that things will change, and they won’t be part of that change. Yet it’s so important to us that everyone is part of this. But it’s a difficult thing to get through. Everyone has their own grief, their own fear, their own sense of loss, and you can only move on by acknowledging that and trying to make it better.’

It is clear from the documentary that as far as Rio’s three children are concerned, the well-intentioned Kate has been a positive force in their lives. At one point Lorenz says that before she came along he would find empty beer bottles every morning and knew his dad had been up drinking. Since being with Kate, the beer bottles have gone. ‘I had no idea he knew,’ Rio says,‘but I was drinking most nights once the kids had gone to bed. I was in a bad place. I thought I kept it hidden from them, and hearing that was hard for me. I’d shut down but meeting Kate changed that and surely that can only be a good thing.’

Kate nods. ‘I’ve learnt so much. I used to google things like: “Can you grieve for someone you didn’t know?” I felt I knew and loved Rebecca as well, but I didn’t know how to express it except by loving her kids and loving Rio. The other day I was bathing Tia, and she said out of the blue, “If Mum was here I think you’d be her best friend.” That made me cry for a lovely reason. It made me realise I don’t have to keep trying to be this perfect person. I can be me.’

There is one final hurdle in the step-parenting story. I ask whether they have plans to have a child of their own. They exchange a glance, and Kate says, ‘That’s a question the kids ask all the time. They are desperate for us to have a baby. As far as I am concerned, I do have three children, but if it happens, it happens. We will just have to wait and see.’ 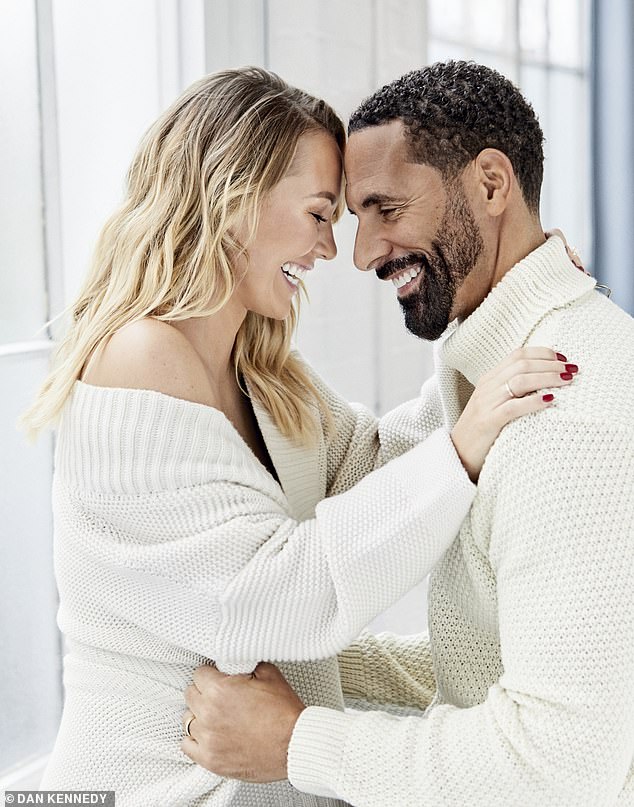 Rio and Kate: Becoming a Step Family is on BBC One tomorrow at 9pm and will also be available on BBC iPlayer