Of Victoria Falls, David Livingstone swooned that ‘scenes so lovely must have been gazed upon by angels in their flight’.

Charles Dickens fell hook, line and sinker for Niagara Falls: ‘What fall of bright green water! It came upon me in its full might and majesty . . . I felt how near my creator I was standing.’ Meanwhile, when she laid first eyes on the majesty of Iguacu Falls in South America, Eleanor Roosevelt was so blown away she simply said: ‘Poor Niagara!’

Waterfalls have always attracted purple prose — and these days they are big business, drawing millions of visitors across the globe annually. It is estimated that the Canadian side of Niagara Falls alone generates £1.4 billion each year from tourism, while the less busy U.S. side pockets around £35 million.

Roughly a million people a year visit Victoria Falls on the border between Zambia and Zimbabwe. And the 250 or so waterfalls tumbling and foaming away in New Zealand are one of the country’s big tourist lures, which attract around four million visitors a year spending roughly £32 billion. Here is our pick of ten of the world’s very best waterfalls.

Victoria Falls in Africa, pictured, which are named after Queen Victoria. The curtain of water spans the entire mile width of the mighty Zambezi river

David Livingstone arrived at Africa’s Victoria Falls in 1855. The first European visitor, he named them after Queen Victoria but locals prefer to use Mosi-oa-Tunya (‘the smoke that thunders’).

The curtain of water spans the entire mile width of the mighty Zambezi before dropping into a gorge.

How to do it: BA (ba.com) London to Victoria Falls via Johannesburg from £511 return; Avani Resort in Zambia, right by the falls, doubles from £185 (avanihotels.com). 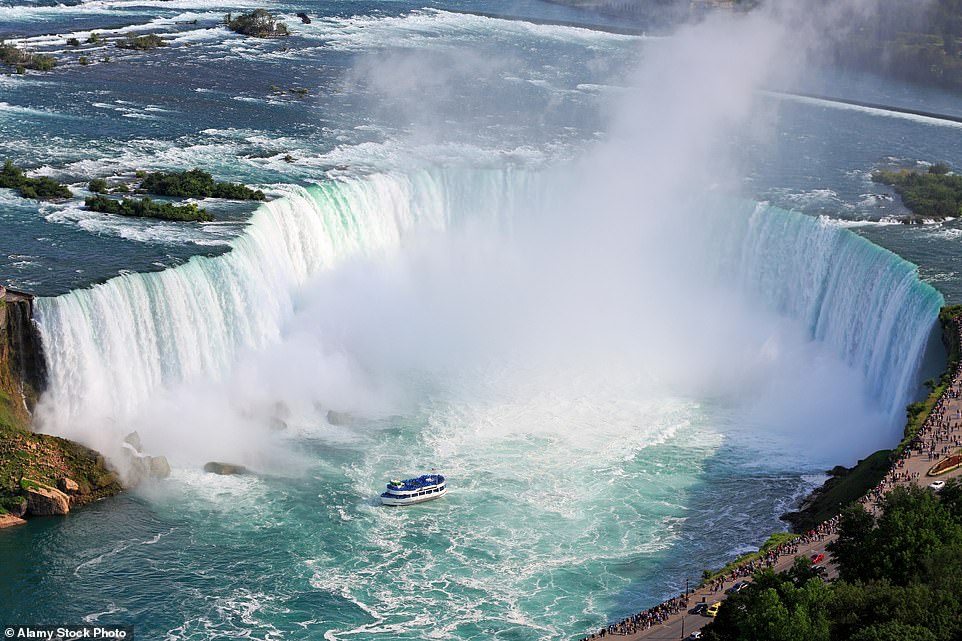 Niagara Falls, pictured, which straddles the Canadian province of Ontario and New York state. It attracts 30million visitors a year

Of the three waterfalls that make up Niagara, straddling the Canadian province of Ontario and New York state, the Horseshoe Falls is the most impressive.

The water cascades from four of the Great Lakes and attracts 30 million annual visitors. Passengers once crossed under the falls in rowing boats but, since 1846, the Maid Of The Mist tour boats have been getting souvenir-ponchoed tourists closest to the action. This year visitors can expect new electric craft.

Don’t miss: The Prospect Point Observation Tower and two viewing portals which cut through the rock at the base (niagarafallsstatepark.com).

How to do it: Air Canada (aircanada.com) London to Toronto from £443 return; DoubleTree Fallsview Resort, doubles from £89 (doubletree3.hilton.com). 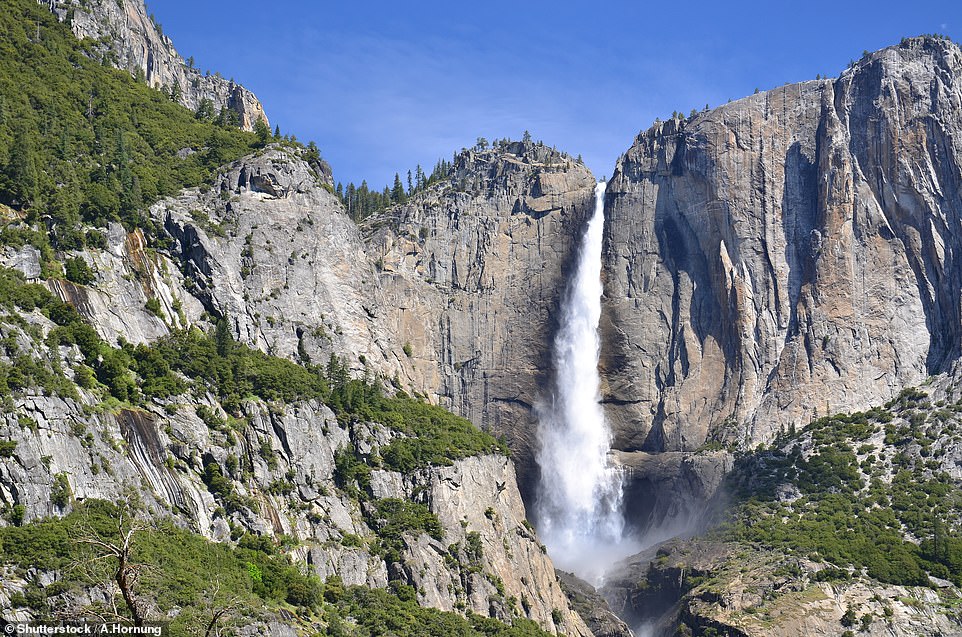 Yosemite Falls are 2,425ft high and are set amid the spectacular Californian National Park. It is a six-hour hike to the top

The six-hour hike to the top is not easy, but those who make it will be rewarded with views of the surrounding valley and the imposing granite mountains Half Dome and Sentinel Rock.

Don’t miss: Gold panning in the rivers of nearby Mariposa county from £38pp (prospectyosemite.com).

How to do it: BA (ba.com) London to San Francisco from £429 return. San Francisco to Yosemite transfer from £46.80 one-way (viator.com). Doubles at the Yosemite Valley Lodge (yosemite.com) from £148. 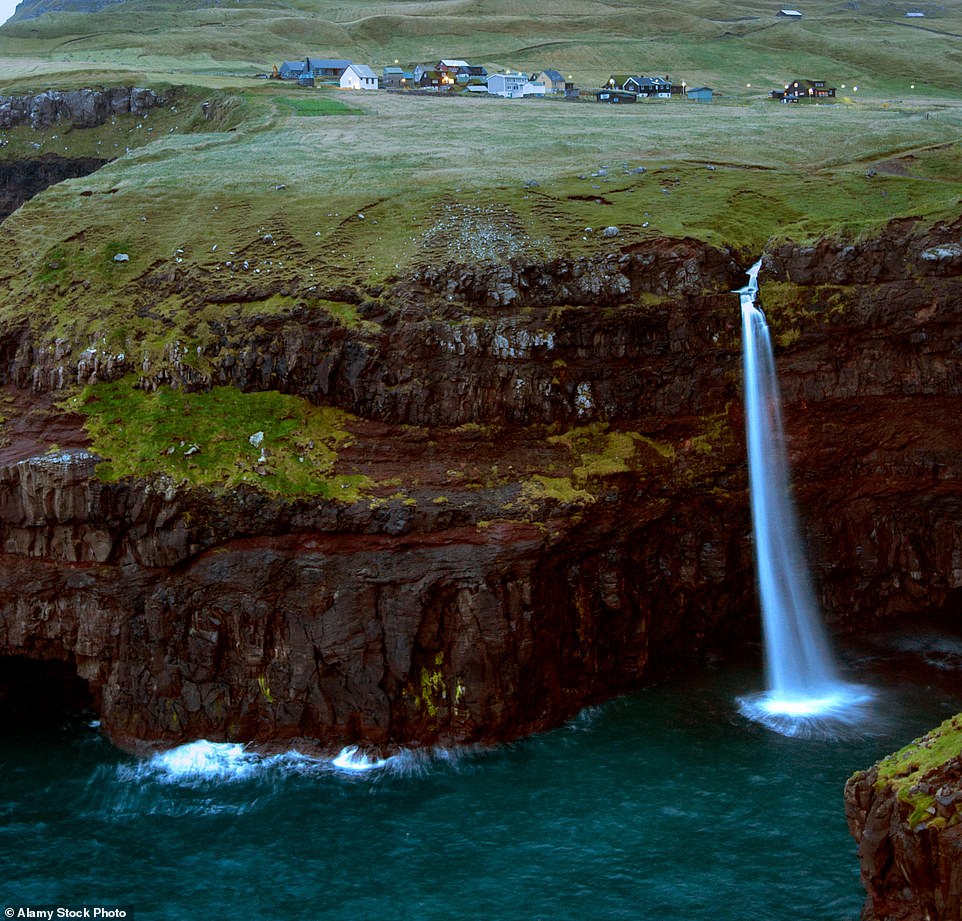 The Mulafossur waterfall, pictured, in the Faroe Islands, which tumbles 200ft into the Atlantic Ocean

The village of Gasadalur (population 13) on Vagar, one of the 18 Faroe Islands, has just opened its first guest house.

Your hardiness in braving the elements in this wildest outpost, situated halfway between Iceland and Norway, will be rewarded by the sight of the Mulafossur waterfall, which tumbles 200ft into the Atlantic.

How to do it: Atlantic Airways (atlanticairways.com) London to Vagar, via Copenhagen, from £160 return. Doubles at Hjalgrimsstova guesthouse at Gasadalur from £125 (gasadal.com).

Worth an Amazon hike 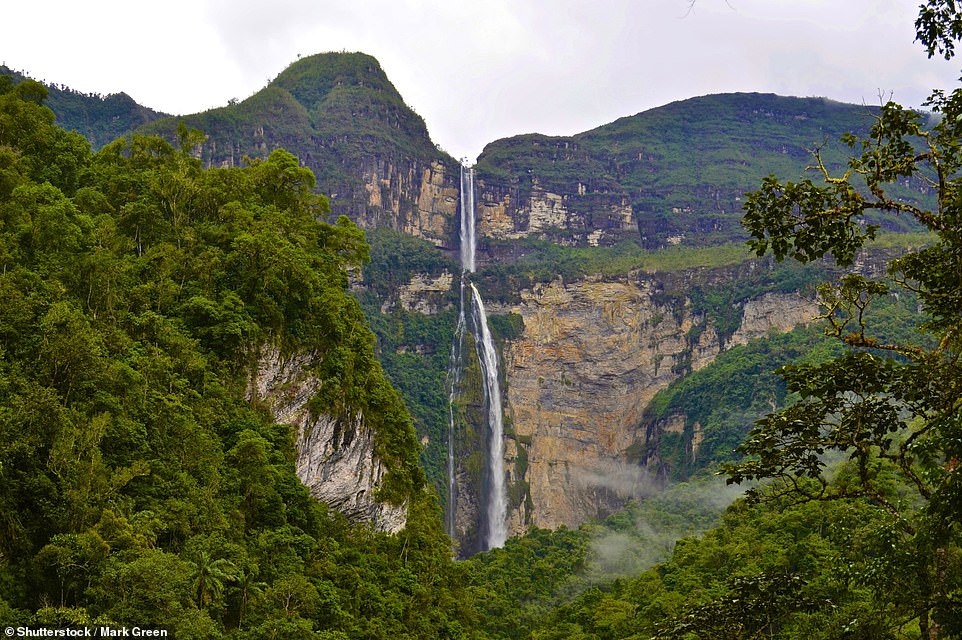 Gocta Falls, pictured, in the high forests of Peru’s Amazon. In the early 2000s, a German explorer discovered the double-drop 2,500ft waterfall

Locals long kept quiet about the magnificent Gocta Falls in the high forests of Peru’s Amazon for fear of invoking the curse of a white-haired mermaid who supposedly lives in the waters.

In the early 2000s, a German explorer discovered the double-drop 2,500ft waterfall and the secret was out. Now, visitors hike for three hours to hear the roar.

Don’t miss: Gocta Lodge, a nearby hotel (details below) that offers guided walks. 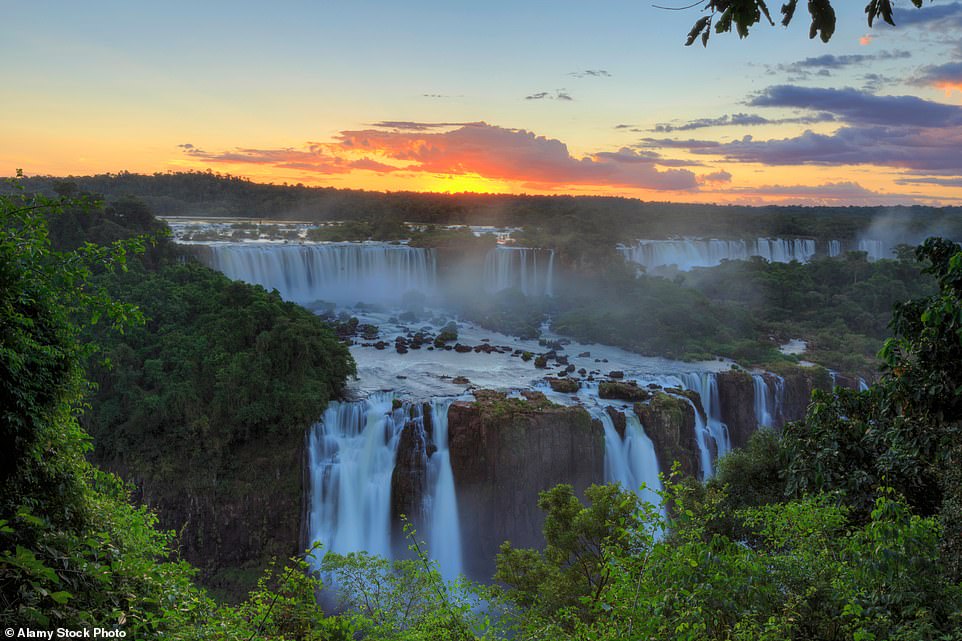 This is apt, as 275 cascades culminate in a vast horseshoe, the Devil’s Throat, with 14 different falls of its own.

Don’t miss: Raft along the Rio Iguacu to the base of the falls from £61pp (adatours.com).

How to do it: Virgin Atlantic (virginatlantic.com) London to Sao Paulo return flights from £685. LATAM (latam.com) Sao Paulo to Iguacu from £72 return. Belmond Das Cataratas offers private views of the falls, with B&B doubles from £268pp (belmond.com). 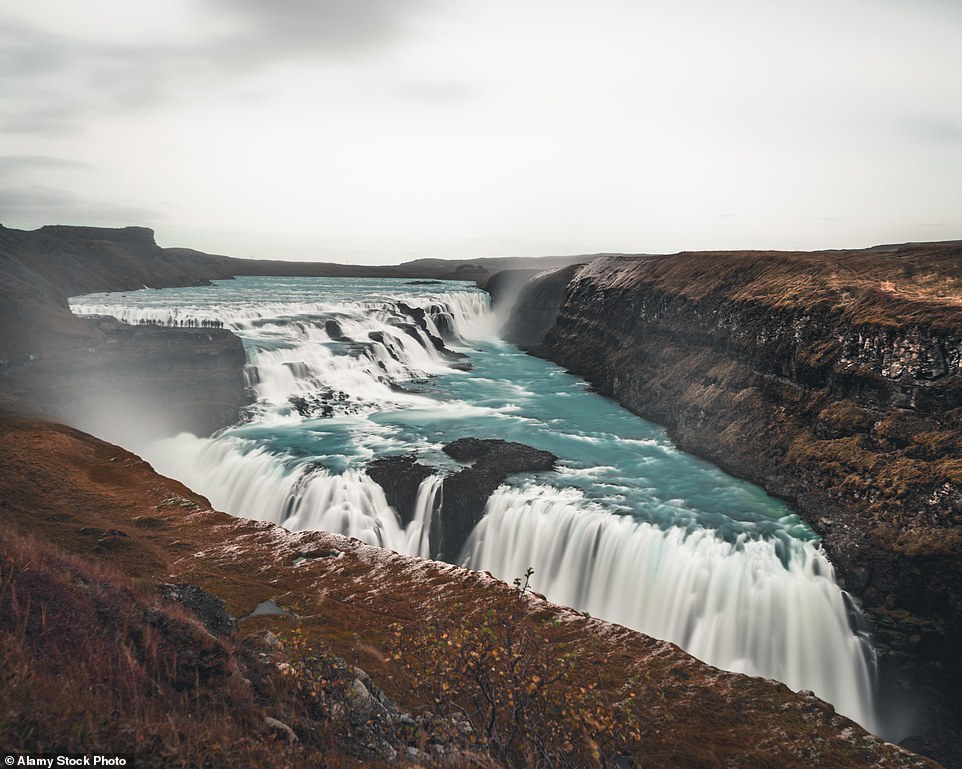 Gullfoss in Iceland plunges 100ft over two tiers into a deep gorge. It is named Gullfoss (golden falls) because glacier sediment turns the water a golden hue in sunlight

Gullfoss in Icelandic means ‘golden falls’, and they are so named because glacier sediment turns the water a golden hue in sunlight.

The Hvita river, east of Reykjavik, plunges 100ft over two tiers into a deep gorge. A plaque commemorates local landowner Sigriour Tomasdottir, who in 1907 saved the waterfall from energy investors by walking 60 miles to Reykjavik to do battle and threatening to throw herself down the 230ft canyon walls She succeeded and in 1979 they became a protected conservation site. 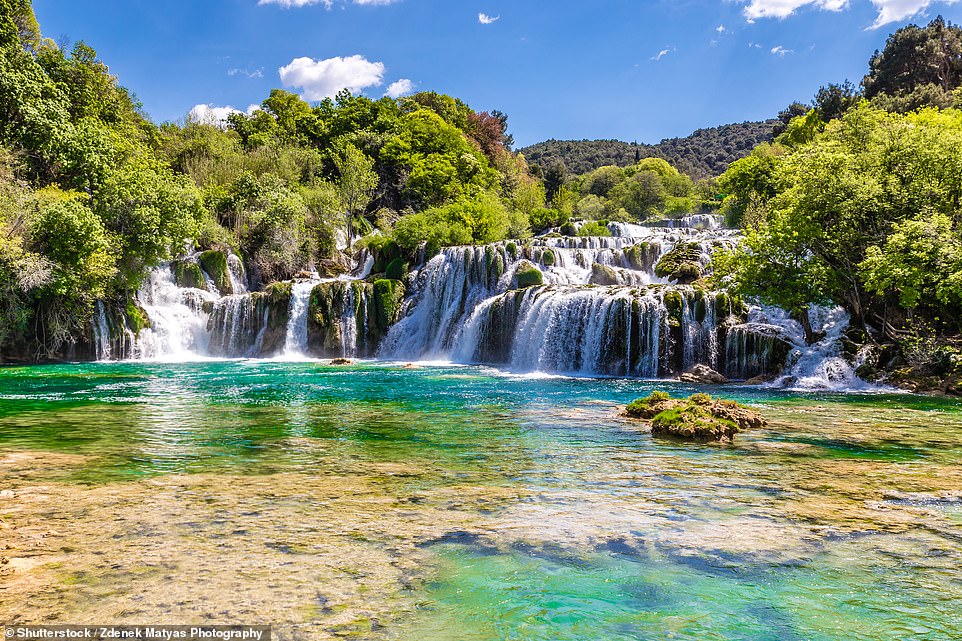 Skradinski Buk, the longest waterfall in Krka National Park near Sibenik, Croatia. The water is often various shades of turquoise

Krka National Park, near Sibenik, Croatia, was created to protect the 45 miles of Krka River, within which Skradinski Buk is its longest waterfall.

The stepped beauty is made up of 17 falls that tumble for half a mile. Thanks to the light hitting the whirlpools, the water turns various shades of turquoise.

How to do it: EasyJet (easyjet.com) London to Split from £147 return, then take a bus to Sibernik from £5 one-way (getbybus.com). D-Resort Sibenik, doubles from £98, B&B (dresortsibenik.com). 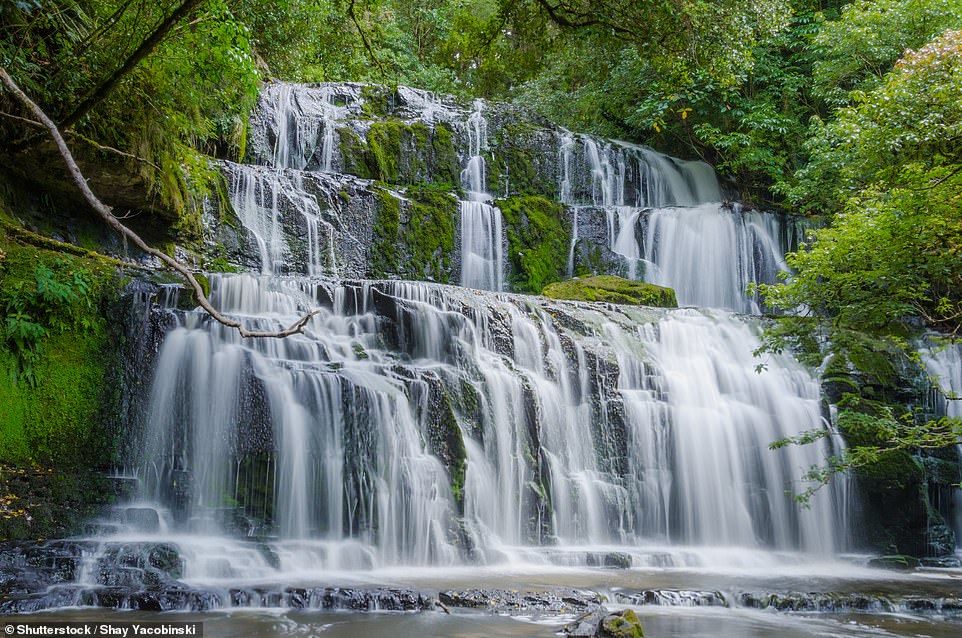 New Zealand isn’t short of natural wonders. You will find one on the South Island in the Catlins Forest Park, an hour and a half south of Dunedin.

The Purakaunui Falls are 65ft of three relentless, graceful tiers. So beautiful, they have long reached celebrity status, adorning calendars and postcards.

Don’t miss: Two other falls in the national park, Matai and McLean, are both within walking distance

How to do it: Air New Zealand (airnewzealand.co.uk) London to Christchurch from £863 return; Greenwood Farmstay, doubles from £99, B&B (greenwoodfarmstay.co.nz). 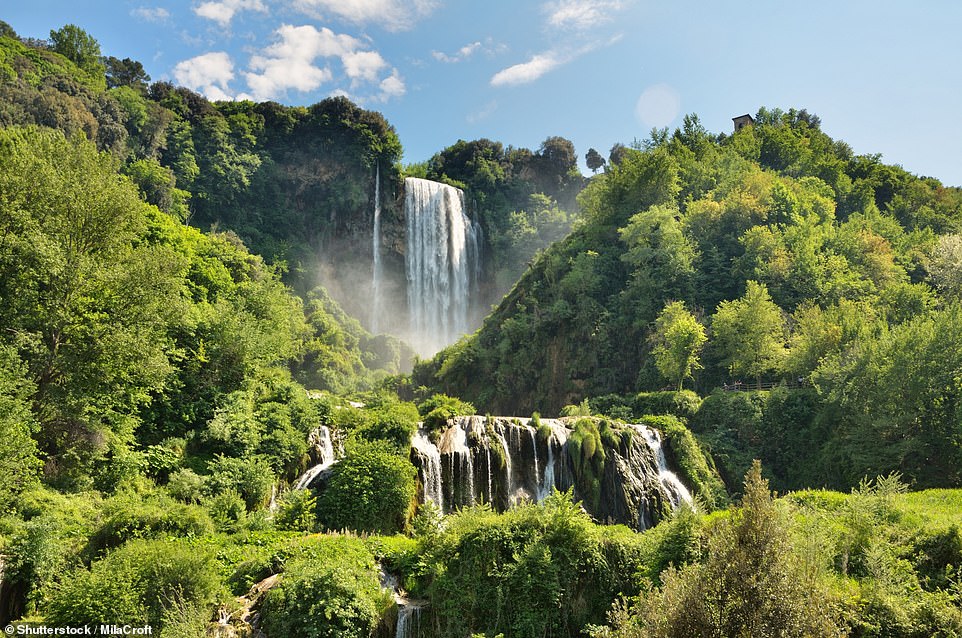 Cascata delle Marmore, pictured, in the Nera River Park, near Terni, Umbria. The flowing white waters are supposed to represent a bridal veil

Cascata delle Marmore in the Nera River Park, near Terni, Umbria, was built by the Romans in 271BC. It’s 540ft and was described as ‘horribly beautiful’ by Lord Byron in 1817 while on his Grand Tour.

The flowing white waters are supposed to represent a bridal veil. They run to a schedule and are best seen when the gates are opened twice a day, so check the timetable (piediluco.eu). You can also climb to the viewing platform at the top.

Don’t miss: Halfway up and through a tunnel, you will find the secluded ‘lover’s balcony’ tucked away behind the water.

How to do it: Ryanair (ryanair.com) London to Perugia from £25 return; trains from Perugia to Terni from £6 (thetrainline.com); Hotel Valentino, doubles from £73 (hotelvalentinoterni.it).

FIVE WONDROUS FALLS THAT ARE CLOSER TO HOME 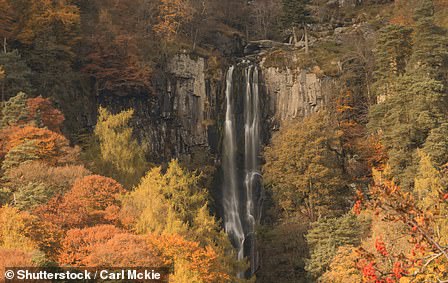 Pistyll Rhaeadr, near Powys, in Wales, the highest single-drop waterfall in Britain

1. WALES: The highest single-drop waterfall in Britain, Pistyll Rhaeadr, near Powys, tumbles over a 240ft cliff.

2. SCOTLAND: The UK’s highest waterfall at 660ft, Eas a’ Chual Aluinn in the Highlands looks like a crack in the mountain from afar.

3. CORNWALL: There are three waterfalls at St Nectans Glen near Tintagel, but it’s the main 60ft Kieve that’s worth the most attention.

4. NORTHUMBERLAND: It’s a three-mile round trip to reach Linhope Spout, a 60ft chute within a national park.

5. YORKSHIRE: Aysgarth Falls is made up of three gushing steps along the River Ure, famously painted by J.M.W. Turner. Stop for a brew at the Mill Race Teashop across the road.