Spectacular images have emerged of a derelict Cypriot city which used to be a tourist hotspot and saw celebrities Elizabeth Taylor, Richard Burton and Brigitte Bardot wandering its golden beaches.

The Mediterranean resort, a southern suburb of Famagusta, has been fenced off and abandoned since Turkey invaded northern Cyprus after a Greek-inspired coup in 1974.

In the early 70s, Greek Cypriot coup sparked a Turkish invasion of the island and has remained eerily silent ever since.

Windows are smashed through at an abandoned Toyota garage in the city of Closed Maras, known as Varosha in Greek, in Cyprus 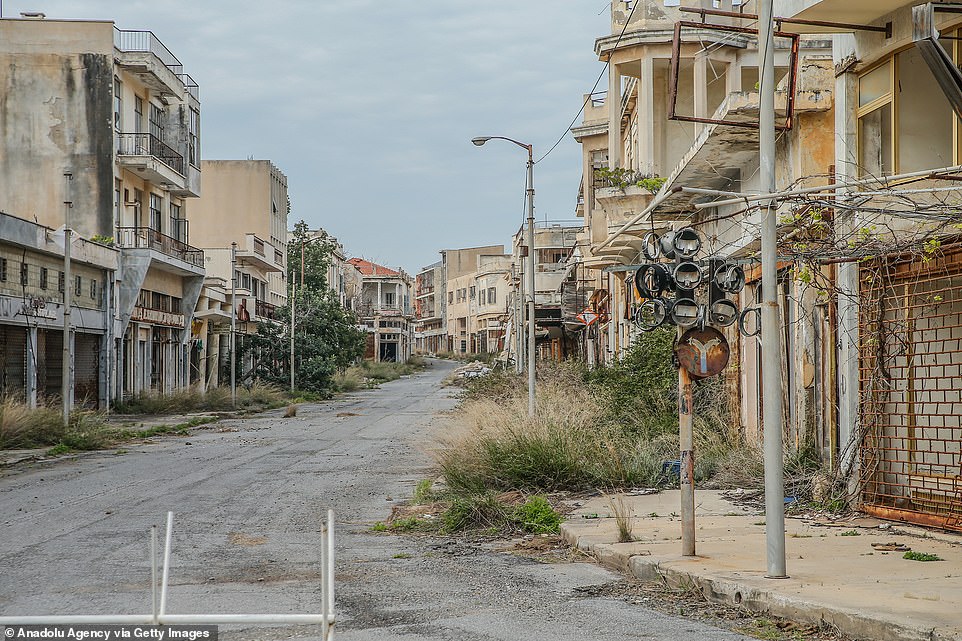 The Mediterranean resort, which lies near Famagusta, has been abandoned since 1974 amid heightened tension with Turkey over settlement in the area 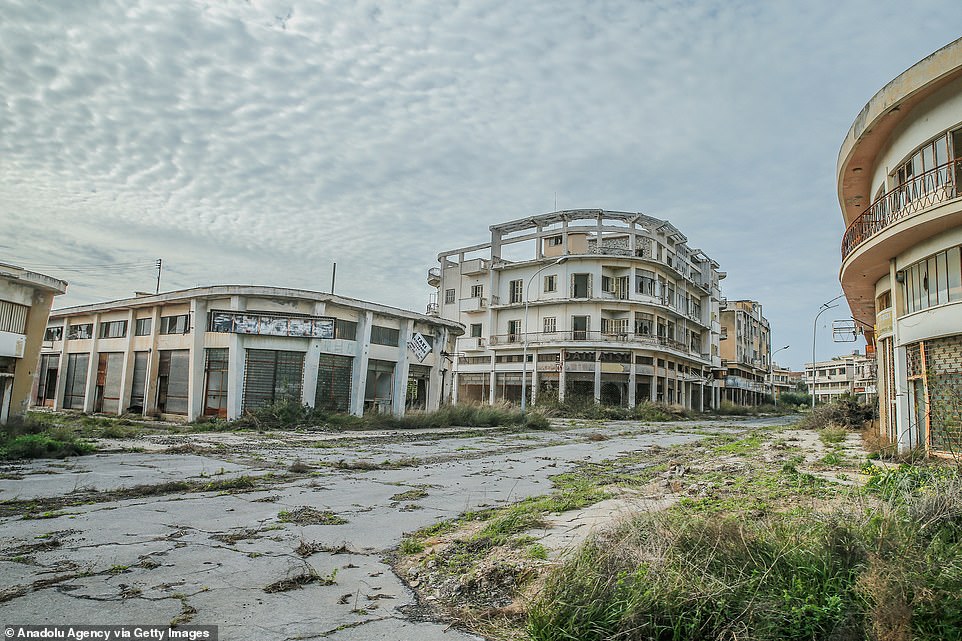 The force drove out 39,000 inhabitants of the city on July 20, 1974, before the Turkish forces controlled the area, and has remained derelict since the Turkish government fenced it off.

Closed Maras was abandoned after the UN Security Council passed Resolution 550 on May 11,1984, which barred the resettlement of the town.

Residents have never returned to their homes and very few have been allowed to enter the fenced-off community. 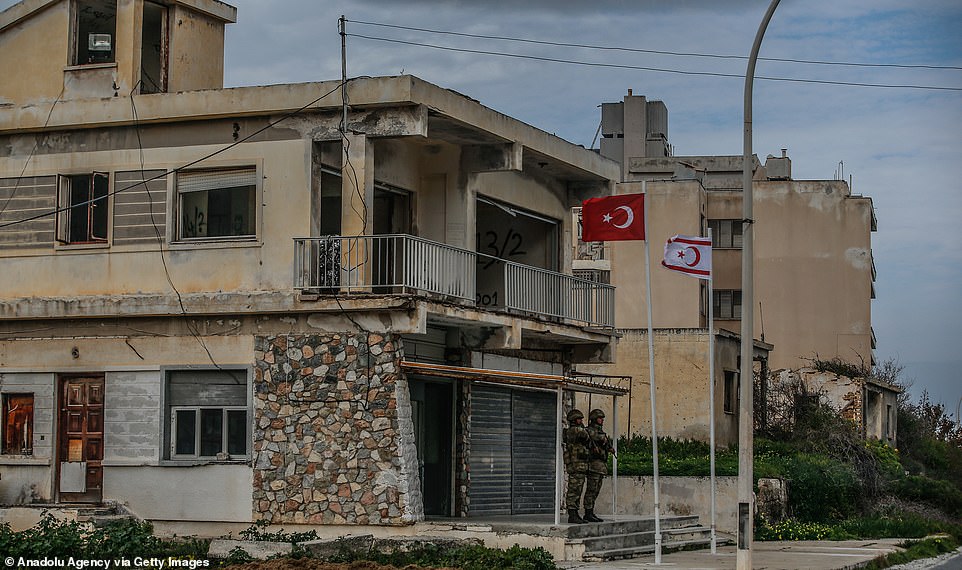 Turkish soldiers stand at attention in Closed Maras. Entry is forbidden with the exception of the Turkish army personnel 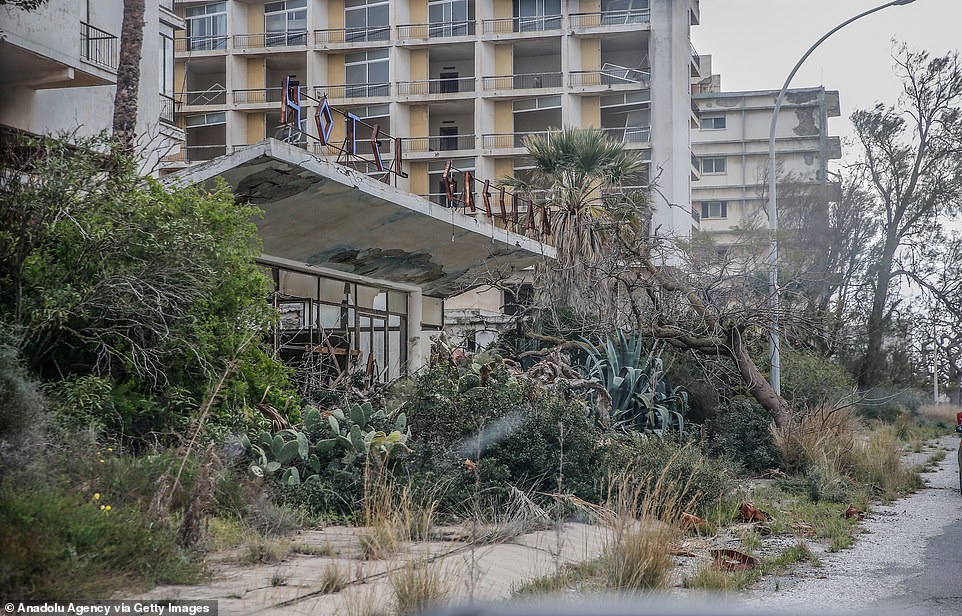 Windows and balconies are seen crumbling on a set of high-rise flats in Maras. They lie behind the empty Hotel Grecian, one of the many well known high rise hotels in the area including the King George Hotel and The Asterias Hotel 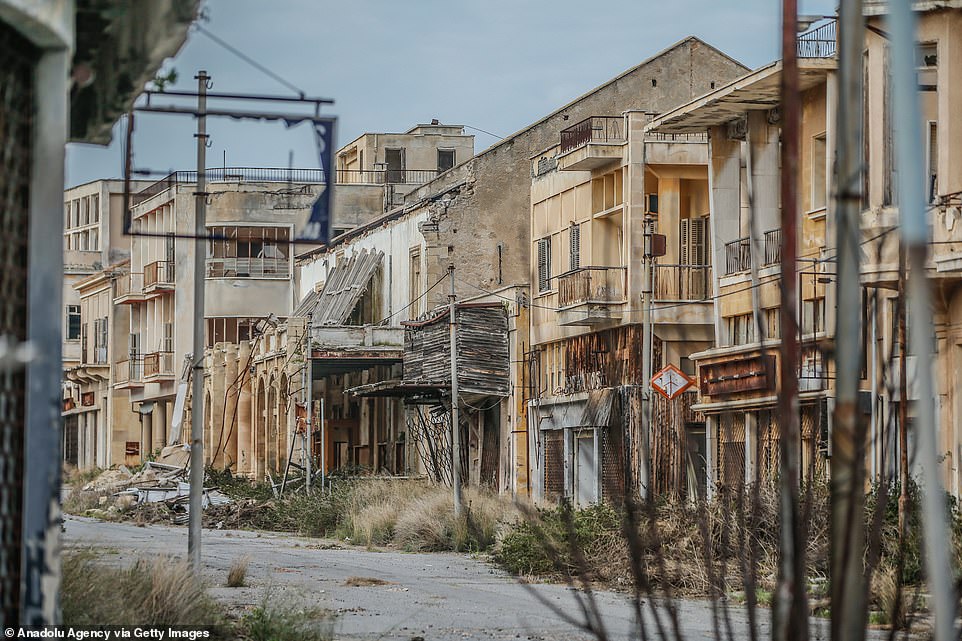 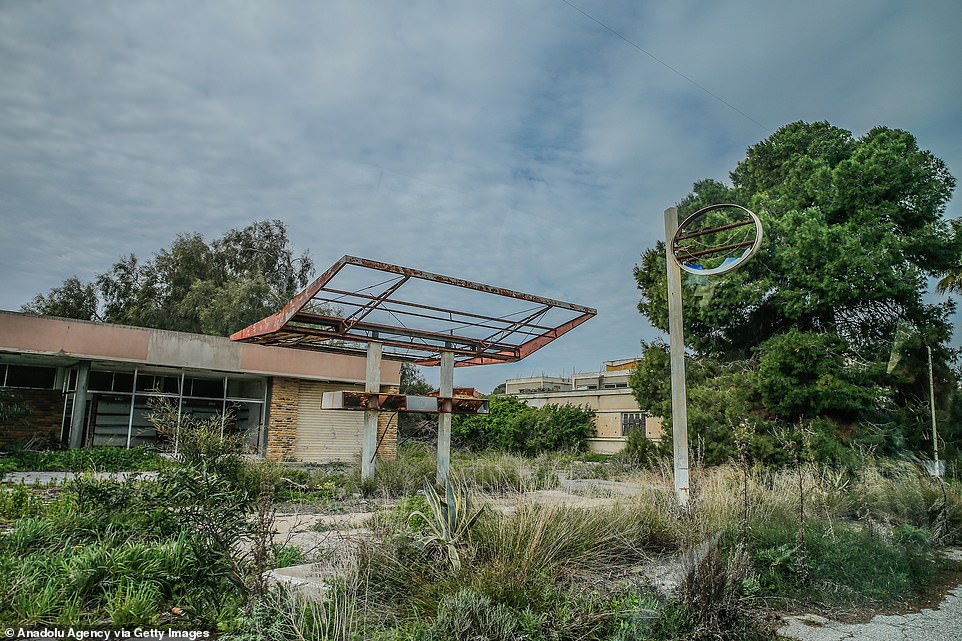 An abandoned petrol station, which has seen its paint chipped and windows smashed through, is surrounded by overgrown plants 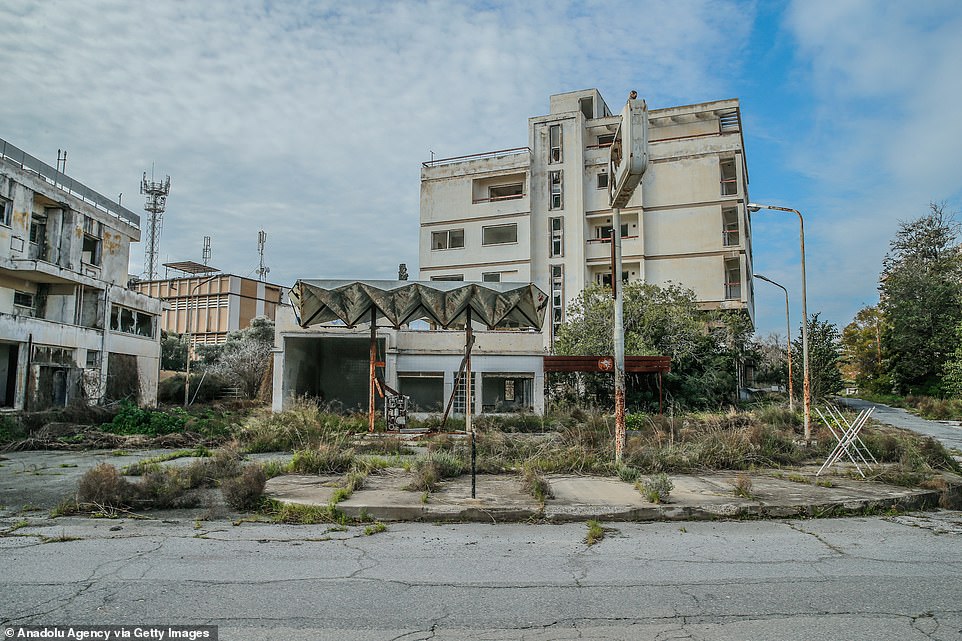 The city, which has become almost trapped in time, is one of the world’s most famous ghost towns, attracting photographers from around the world 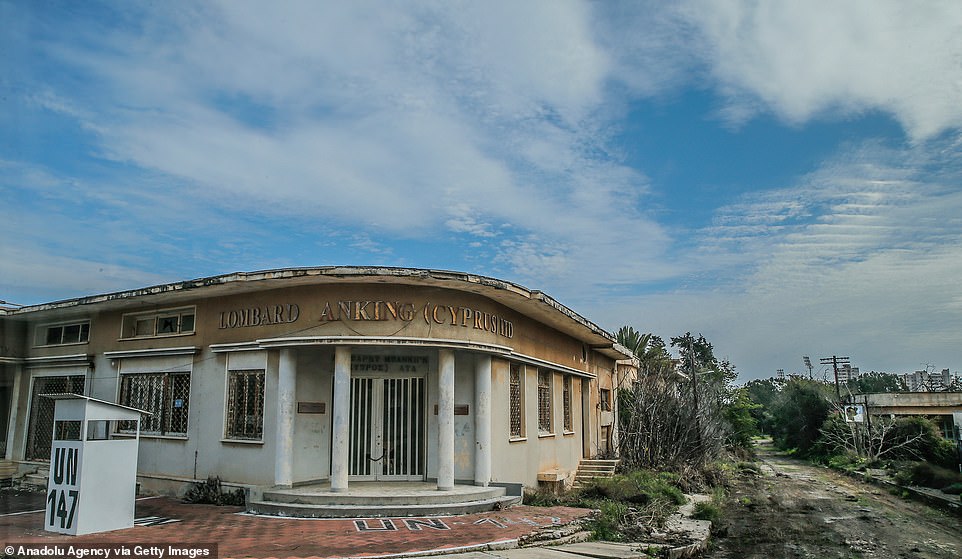 The distinctive lettering of Lombard Banking remains plastered across a former bank’s exterior in the derelict city, known as Varosha in Greek 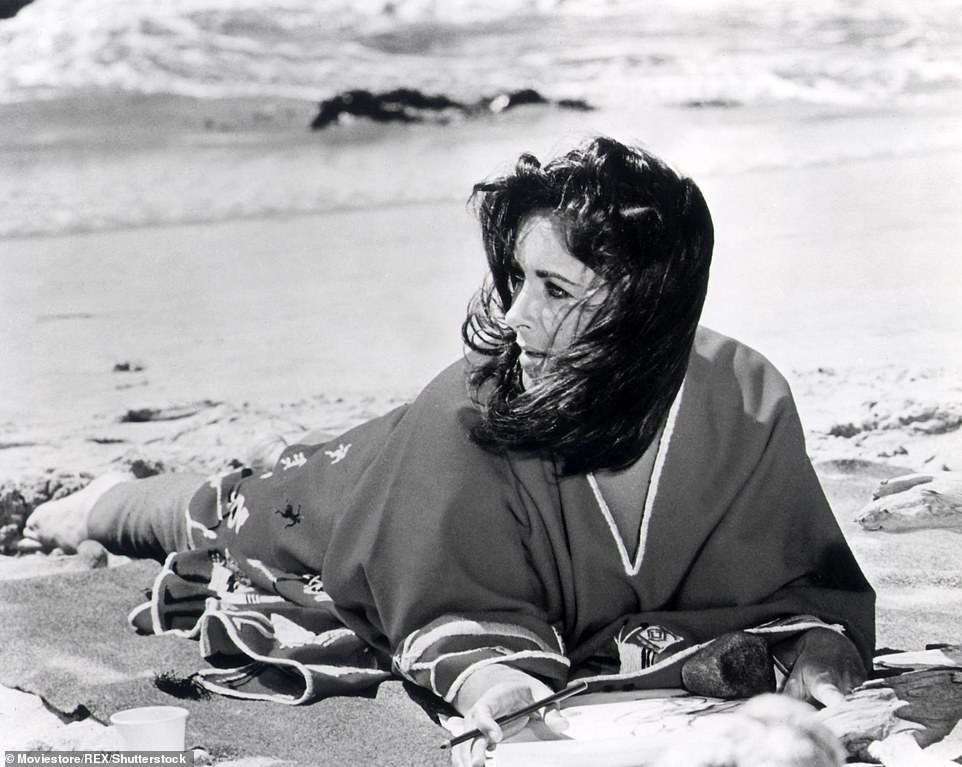 Actress Elizabeth Taylor (pictured in The Sandpiper, 1965) was one of many celebrities which were spotted wandering the golden beaches of Maras in the 70s

In its hey-day, the population grew to 39,000 and became a millionaire’s playground where they soaked up the rays across vast beaches or on the balconies of their deluxe apartments.

The land alone is expected to be valued at around $100billion, local media reported.

After decades of neglect, high-rise hotels and apartments, restaurants and residences are crumbling, and the land has been reclaimed by overgrown vegetation, although the untouched beach and crystal-clear water look as inviting as ever.

The deserted Cypriot city has become almost trapped in time and one of the world’s most famous ghost towns, attracting photographers from around the world. 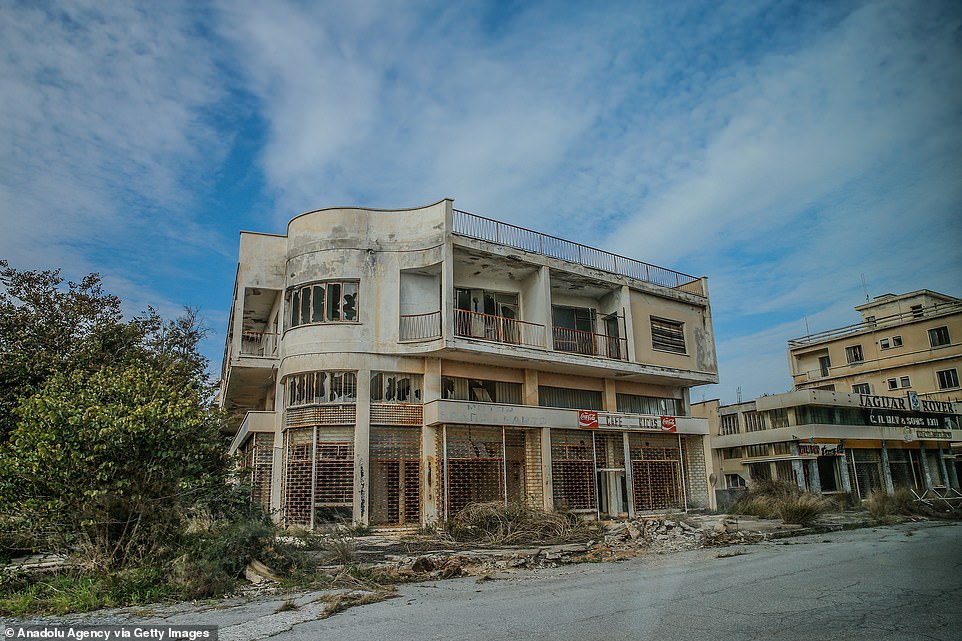 Pictured: A deserted cafe, which features a Coca Cola sign overhead at the entrance, and car mechanic lie next to a former Jaguar car garage 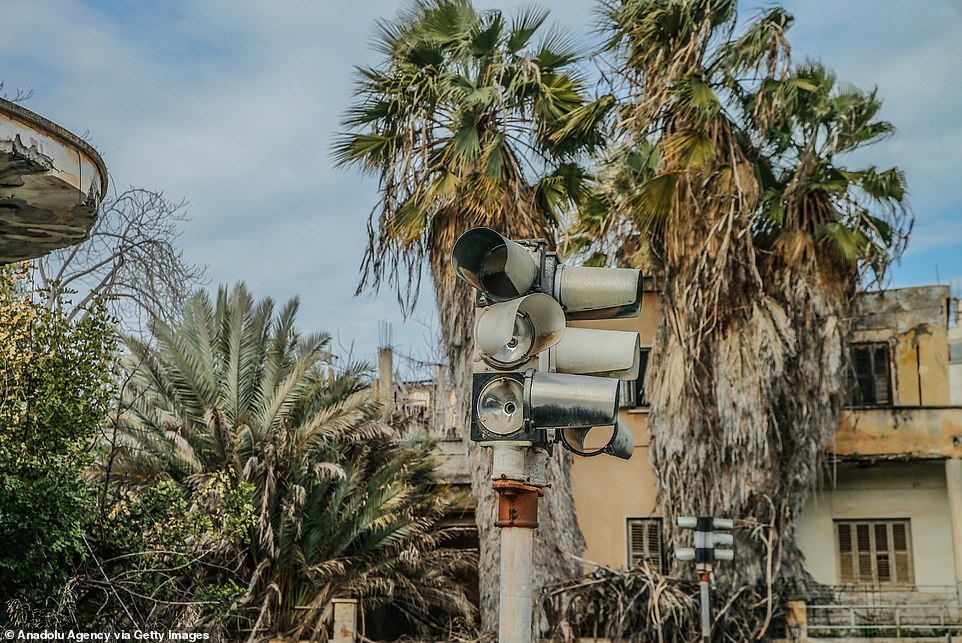 Former UN Secretary General Kofi Annan tried to allow the city’s original inhabitants to return to the city but this was rejected by the Greek Cypriots in a referendum in 2004.

Turkish and northern Cypriot officials met in an abandoned town wrecked by war to discuss potentially re-opening the area after 46 years, on February 15.

Speaking in Varosha after touring the area, Turkish Vice President Fuat Oktay said: ‘Keeping this coast of paradise under the sovereignty of the Turkish Republic of Northern Cyprus idle is not acceptable legally, politically or economically.’ 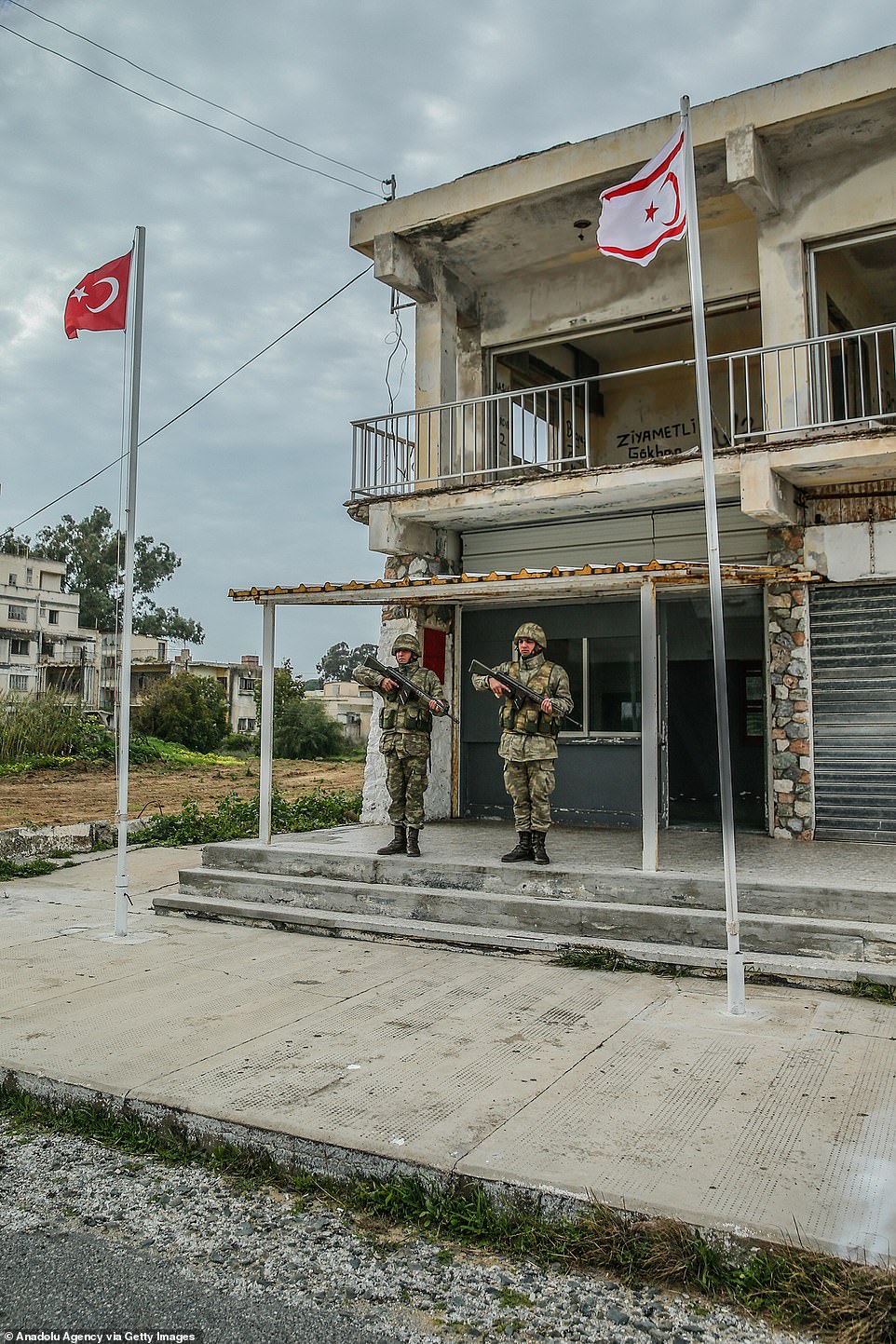 It has remained enclosed in barbed wire, uninhabited, and under the control of the Turkish military ever since the conflict in 1974 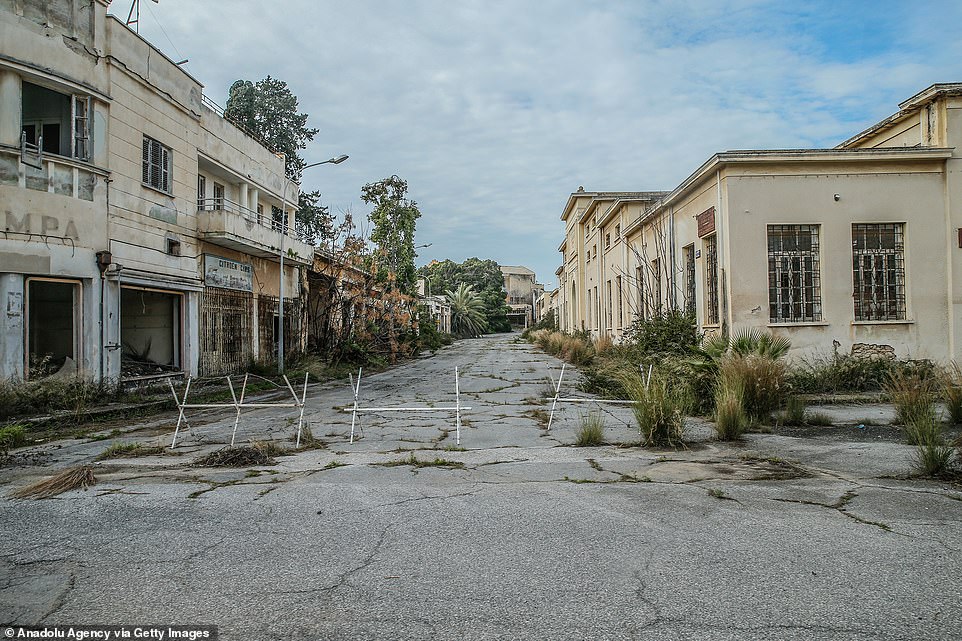 Buildings are surrounded by overgrown vegetation. Speaking in Varosha on February 15, Turkish Vice President Fuat Oktay said: ‘Keeping this coast of paradise under the sovereignty of the Turkish Republic of Northern Cyprus idle is not acceptable legally, politically or economically.’ 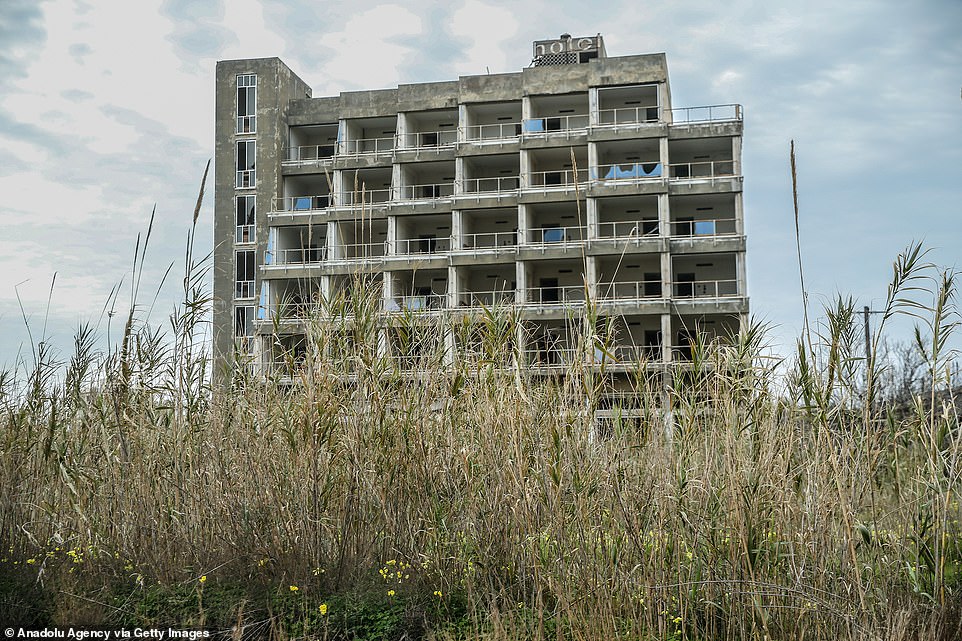 A hotel looks worn and faded with broken balconies. Their safety barriers are seen plummeting towards the ground

Turkish and northern Cypriot officials were continuing their inventory efforts there, he said.

He hopes it is ‘revived in a way that will revitalise the economic, trade and social life here’.

Oktay’s visit to the region with Turkish and northern Cypriot officials marks one of the most concrete steps by either side towards re-opening Varosha.

The island of Cyprus was divided in 1974. The island’s Greek Cypriots live predominantly in the south, and Turkish Cypriots in the north since the 1974 war. Several peacemaking efforts have failed and the discovery of offshore resources has complicated the negotiations.