A 55-year-old woman who went missing after she was swept away by raging floods has been identified as the fifth victim of Storm Dennis.

Yvonne Booth, from Birmingham, became stranded in her car and was carried by fast-flowing water near a bridge which crosses the River Teme, near Tenbury Wells, Worcestershire, on Sunday.

Police launched a desperate hunt before her body was recovered on Monday evening.

Her family say they are ‘devastated’ by the news, and ‘appreciate the continued support from the emergency services’. 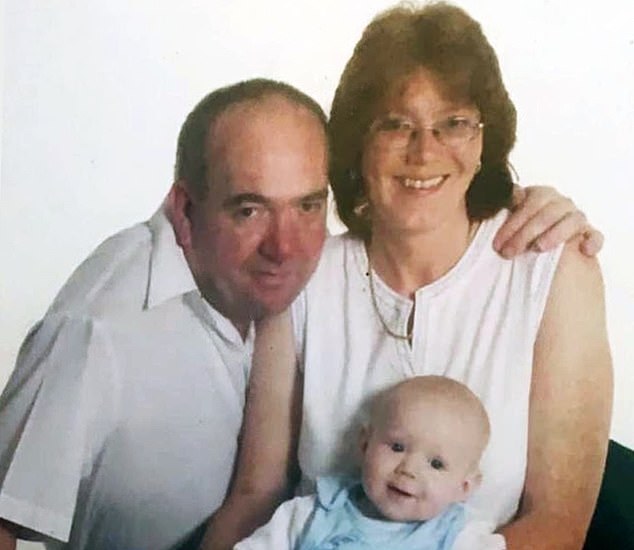 Yvonne Booth (pictured), from Birmingham, was swept away during torrential rain after her car got stuck near a bridge which crosses the River Teme, near Tenbury Wells, Worcestershire

A statement from her family, released by West Mercia Police, said: ‘Yvonne is a very much loved member of our family and we are all devastated by this news.

‘We appreciate the continued support from the emergency services. We would like to ask for our privacy at this time.’

More than 550 flood warnings are still in place – including five with ‘danger to life’ – as Britain faces even more misery in the aftermath of the storm, with forecasters predicting another two inches of rain within 24 hours in parts of Wales.

The Environment Agency (EA) said downpours have swelled rivers to “exceptional” levels in parts of Britain. 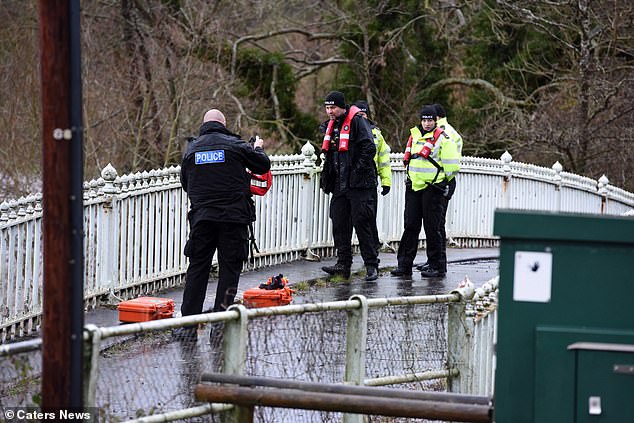 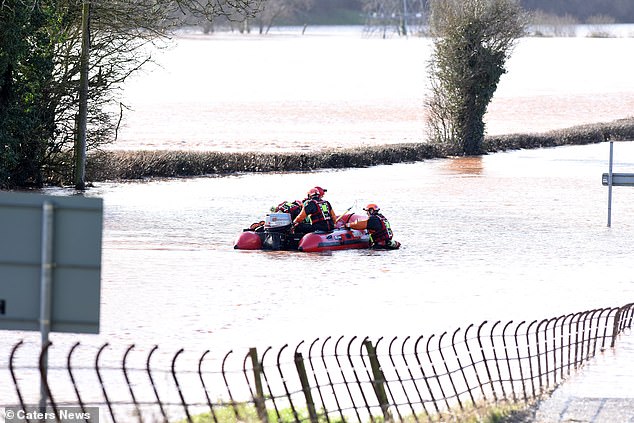 Communities across the country are counting the cost of the weekend’s storm, which left hundreds of properties flooded.

Among the worst affected areas were South Wales, Herefordshire, Worcestershire and Shropshire where major incidents were declared.

A Met Office weather warning has also been issued for ice and snow over the Grampians in Scotland, which will be in place until 11pm on Tuesday.

Yellow warnings for wind and rain are also in place for north and south Wales on Wednesday and Thursday.

Blustery showers are set to continue throughout Monday and Tuesday, with western areas of England, Scotland and Wales the worst impacted. In the Scottish Highlands there will be snow in higher areas, as well as hail and spells of thunder.

Rain and increasingly strong winds will move in from the west on Wednesday morning spreading across the whole of the UK. 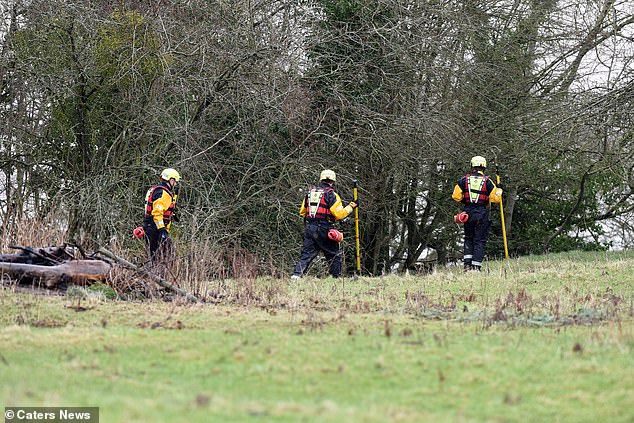 Her family say they are ‘devastated’ by the news, and ‘appreciate the continued support from the emergency services’ 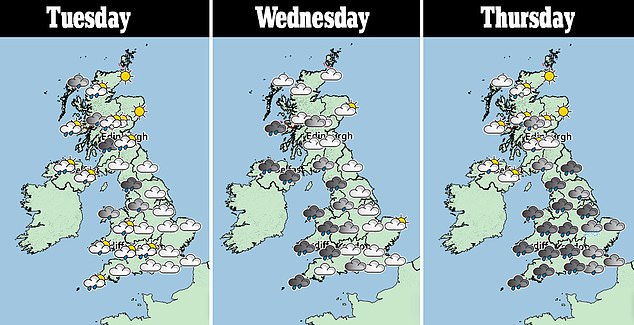 Showers will be persistent and heavy at times in Wales and north western England overnight and a further front will move through on Thursday bringing heavy downpours.

Hereford and Worcester Fire and Rescue Service said it had pulled one man from the River Teme at Eastham Bridge on Sunday morning, with a female casualty still unaccounted for as of about 4pm.

A man in his 60s died on Sunday after being pulled from the River Tawe near Trebanos Rugby Club in Wales, but Dyfed-Powys Police said his death was not being linked to the bad weather.

A 42-year-old hill walker was found dead after he went hiking in the Scottish Highlands on Sunday.

Police were scrambled to Stob Ban, a 3,278ft munro located on the south side of Glen Nevis, northwest of Kinlochleven, Highlands at around 1pm on Sunday, but he was pronounced dead at the scene. 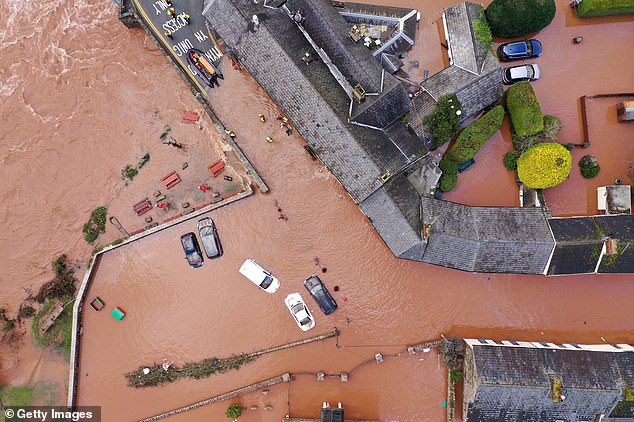 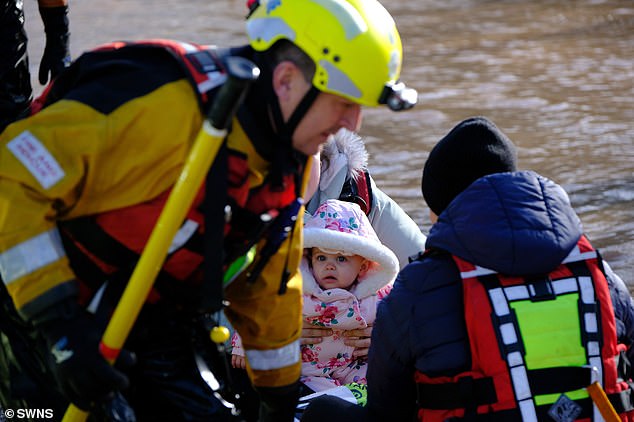 The bodies of two men were pulled from rough seas off Kent on Saturday as the UK was struck by a storm for the second weekend in a row.

There are fears for a man called Leon Ford, 32, from Guildford, Surrey, who has not been seen since around 2am on Saturday.

Police are also looking for a woman, 36, who disappeared from a nightclub in the early hours of Sunday morning and is believed to have run into the sea in Brighton.

Storm Dennis was described as ‘life-threatening’ in South Wales, where the Met Office had a red warning in place until 11am today.

Forecasters said that winds of more than 80mph were recorded across parts of the country, with the highest measuring 91mph in Aberdaron in north Wales on Saturday. 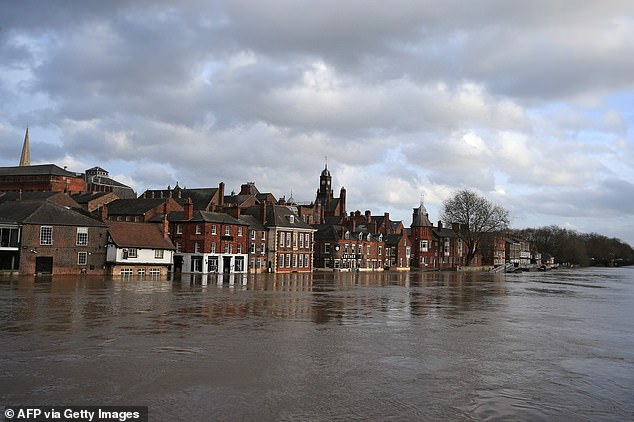 The River Ouse is pictured at record-breaking levels in York, where flood defences are struggling under the pressure