A young science teacher who called 999 after complaining she could barely walk died just hours later after an operator mistakenly advised her to make her own way to A&E, an inquest heard.

Amber Hickford, 26, had said she was experiencing dizziness and blurred vision after falling into a bedside cabinet but her 999 call was ‘coded’ incorrectly on the scale of emergency and no ambulance was sent to her address.

Instead Miss Hickford was required to climb down two flights of stairs to get herself to hospital and she refused to go despite being offered help by her boyfriend Jason Hanmer. 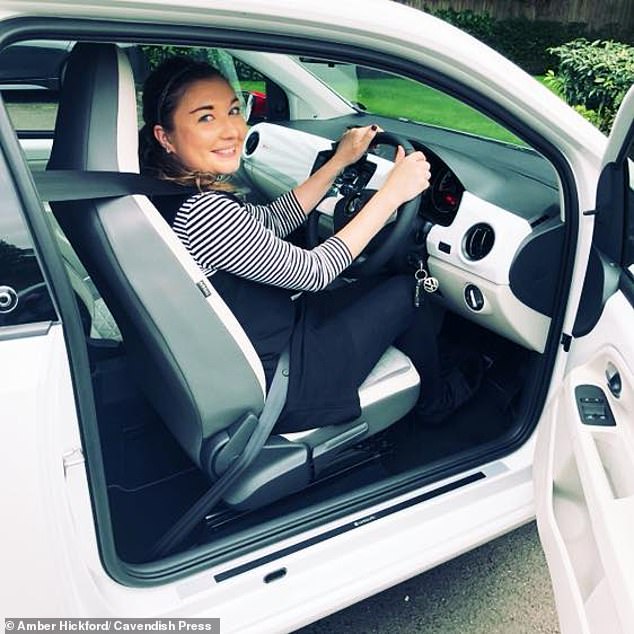 Science teacher Amber Hickford, pictured, called 999 but was told by a call handler that she should make her own way to Accident and Emergency as they would not send her an ambulance to her apartment in Rochdale, Greater Manchester 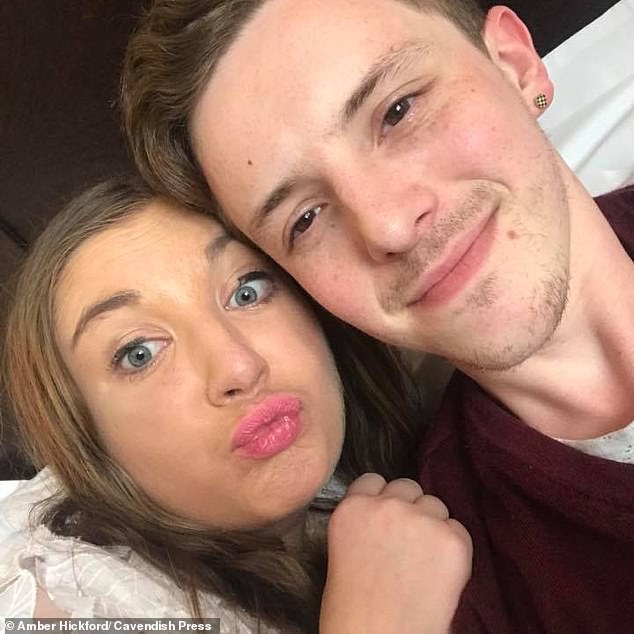 Ms Hickford’s boyfriend Jason Hanmer had offered to help her get to the hospital but instead she decided to ‘sleep it off’ and returned to bed. 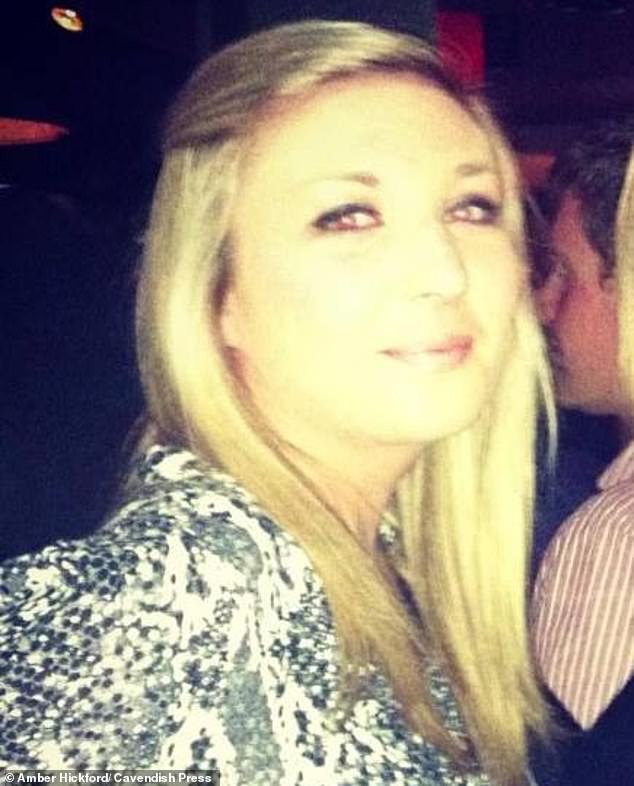 She tried to sleep it off but Mr Hanmer called 999 again around 99 minutes later when he found her unresponsive in bed and he began CPR whilst an ambulance was dispatched to their apartment in Rochdale, Greater Manchester.

Three ambulances arrived at the property within only ten minutes of the second call being made but Miss Hickford was pronounced dead shortly afterwards. Tests revealed she had inadvertently taken a toxic level of paracetamol tablets for severe stomach pains she had been experiencing following a urinary infection.

Inquiries revealed she had only been discharged from the same hospital just two days earlier and given stronger codeine painkillers. The call handler who fielded the first 999 call has since been given ‘feedback’ over the error.

The hearing was told Miss Hickford, who taught at Oulder Hill Community School in Rochdale had been ‘extremely caring’ who ‘always put other people’s needs before her own.’ After attaining a 2:1 in biochemistry at Leeds University she passed her teaching exams and would undertake voluntary work for the Dr Barnardo’s children’s charity.

She enjoyed kickboxing, skiing and reading and was an avid walker who had completed a 10k run. 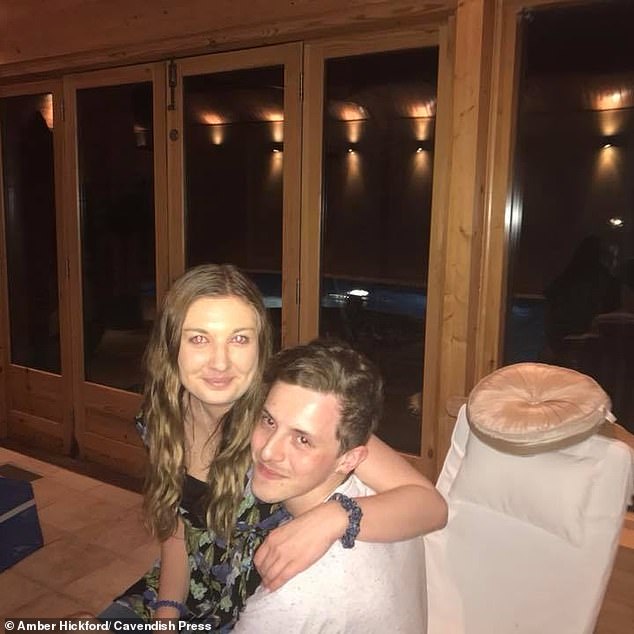 Ms Hickford was first admitted to Fairfield Hospital in Bury suffering from stomach problems. She was given strong pain killers and advised to return for a follow up appointment. However, she rang 111 on April 21 claiming she was having difficulty walking

The tragic events began on April 19 last year after Miss Hickford had been admitted to Fairfield Hospital in Bury with stomach problems. Doctors gave her strong painkillers and sent her home advising her to attend a follow up appointment but on April 21 she rang the NHS 111 service at around 8.40pm saying she was struggling to walk.

Mr Hanmer told the Heywood inquest: ‘As I got home Amber was sat in the hallway and she said she was feeling drowsy. I made her tea but later that evening she fell into a shoe cabinet and into the bedside table.

‘She couldn’t walk at all and went drowsy every time she stood up. I could tell she was very unsteady. I rang 111 and the operator said they would not to talk to me and asked to speak to Amber herself. 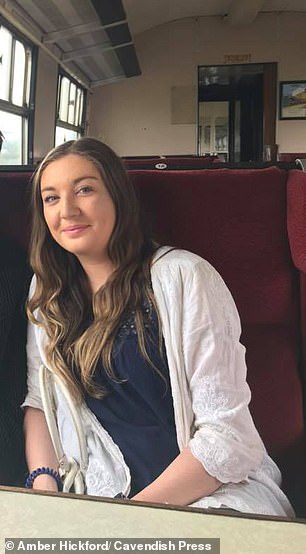 ‘They told her to ring 999 but when she rang it the call handler told her to go to A&E. We live up two flights of stairs and I couldn’t get her down safely by myself. Her parents arrived but Amber stated that she didn’t want to go to the hospital and her parents left.

‘I went out to move my car and went straight back to the bedroom and Amber was in there making snoring noises.

‘I moved her onto her side and was only gone again 10 minutes before I went back to check on her. I shouted out but didn’t get a response and rushed over to her and she was cold. I listened to see but she wasn’t breathing.

‘I pulled her onto the floor and called 999, and they talked me through CPR. The paramedics arrived and then came into the room but said Amber wasn’t breathing and her heart had stopped and machines were doing it for her. They called another ambulance for help getting her downstairs. Amber passed away later in hospital – we had been together for two years.’

Miss Hickford’s father Neil said: ‘She had mentioned that she did have some stomach pains but she had just started a new job and felt some of that might be down to nerves.

‘At around 9pm that evening, Jay rang saying they had called the emergency services and asked us to help him convince Amber to go to hospital as she wasn’t listening to him.

‘When we got there Amber was standing and dressed but still didn’t want to go to hospital. We stayed there until around 10pm and we were almost home and Jay phoned again around 10.20pm saying he had rung the ambulance and wanted us to go back. There were three ambulances outside and the paramedics were working on Amber on the floor in the bedroom. It was devastating to be told she could not be resuscitated. 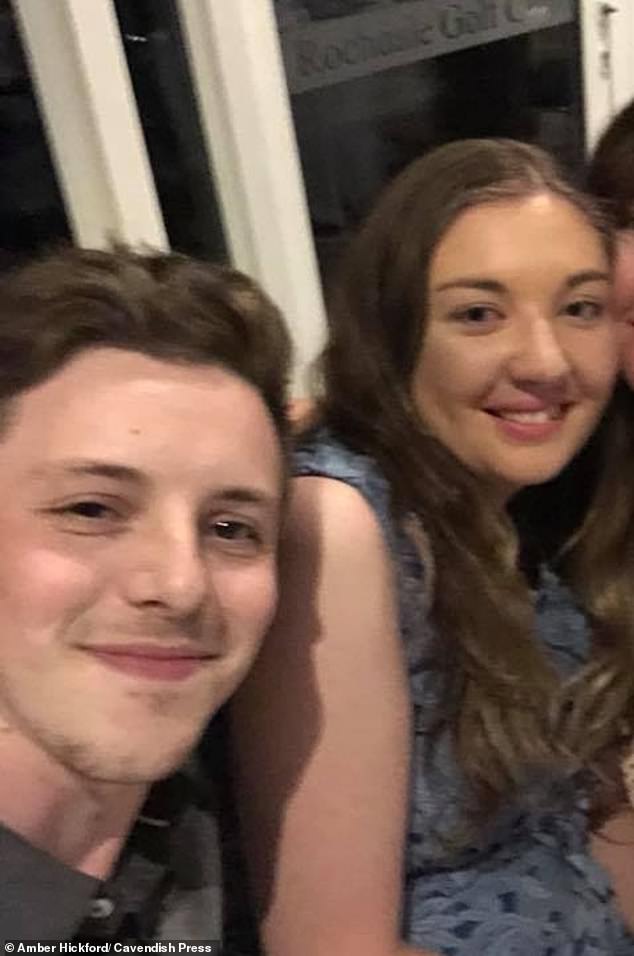 Mr Hanmer, pictured with Ms Hickford, said after he found her unresponsive, he attempted CPR, receiving instruction from a 999 call handler until an ambulance arrived at their home 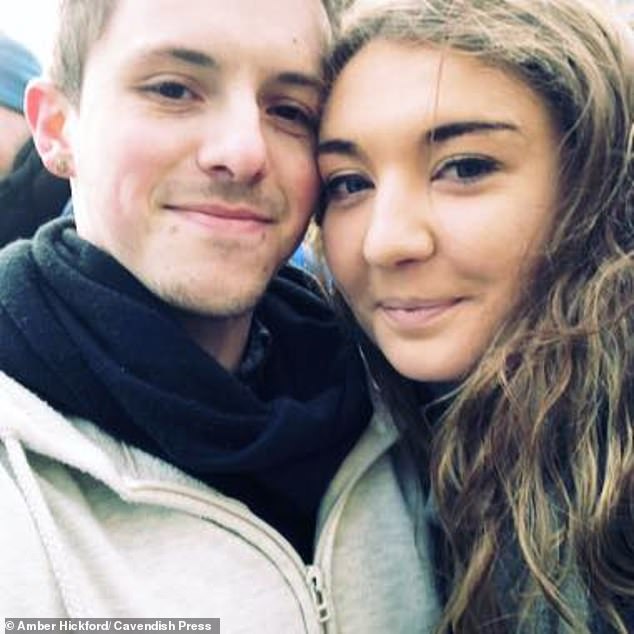 ‘Amber was a science teacher and would be aware of the nature of the medication she was taking and the effects that that may have. She would never have knowingly taken more than she should have.’

Angela Lee, deputy sector manager for the North West Ambulance Service said: ‘On April 21, an emergency call was received and although Amber’s abdominal pain seemed to have subsided she was now struggling to walk and experiencing dizziness, drowsiness and blurred vision when stood.

‘At 10.24pm – around two hours later – a further call was received from Amber and three emergency response vehicles were allocated.

‘The call handler who handled the call has received feedback which revolved around a one to one session.’

When questioned by Amber’s family about why the caller handler had not despatched an ambulance following the first 999 call, Ms Lee said: ‘They have a couple of seconds to make that decision and it’s a very difficult task. The call was passed to a clinician who spoke to Jay and then to Amber and the clinician gave the advice to attend the emergency department.’

Coroner Michael Salt adjourned the hearing for further inquiries but said: ‘I accept that the call was coded incorrectly. I need to know more about the potential effect of the delay in the arrival of the ambulance and what could have been achieved in the time – that seems to me at least an hour and 36 minutes.

‘I have heard about the way in which the categorisation error came about in a very difficult situation. A judgement needs to be made very quickly and I don’t in any way criticise the call taker.

‘The question is whether something could have been achieved in the time that might have been available. The important thing is to try to find out whether the delay contributed to death and whether it was a missed opportunity..’