Conservative Iranian hardliners are expected to sweep to victory in elections today after seizing on US killing of terrorist general Qassem Soleimani.

Sitting moderate Iranian President Hassan Rouhani is unlikely to pick up adequate support as many voters are expected to stay away from the polls.

Supreme leader Ayatollah Ali Khamenei was pictured voting in Tehran, the country’s capital, this morning as he called on the nation to cast their ballot ‘as soon as possible’ to ‘guarantee the country’s national interests’.

The 11th parliamentary election since the 1979 Islamic Revolution comes after steeply escalating tensions between Iran and the United States and the accidental downing of a Ukrainian airliner killing 176 people and sparking anti-government protests. 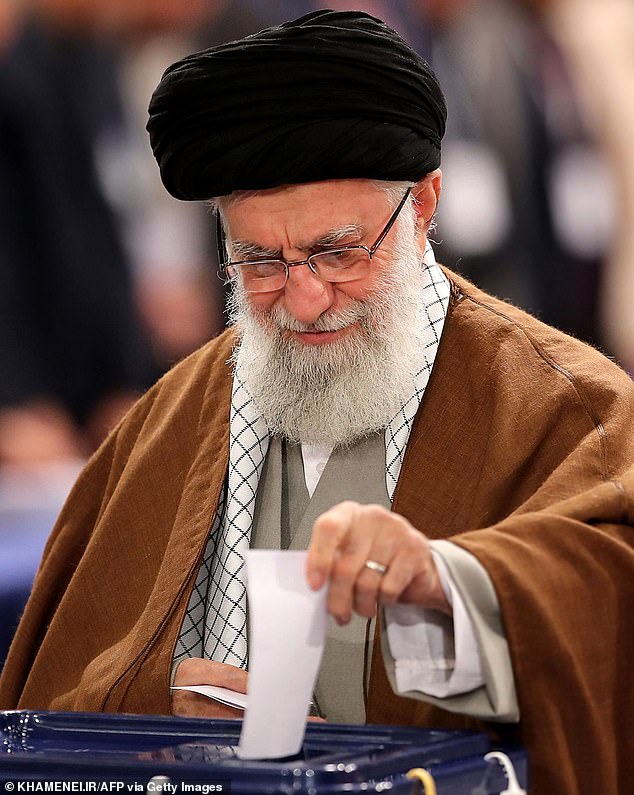 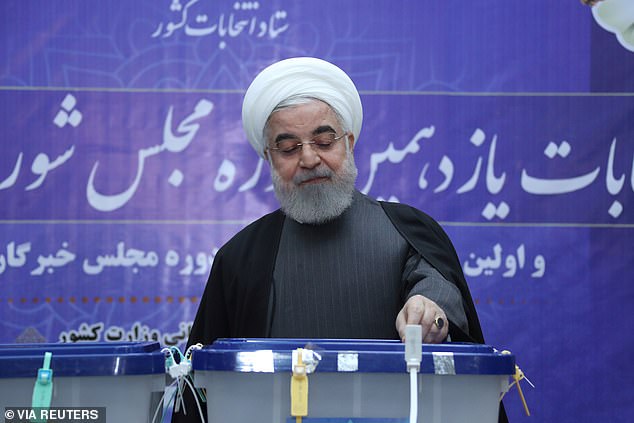 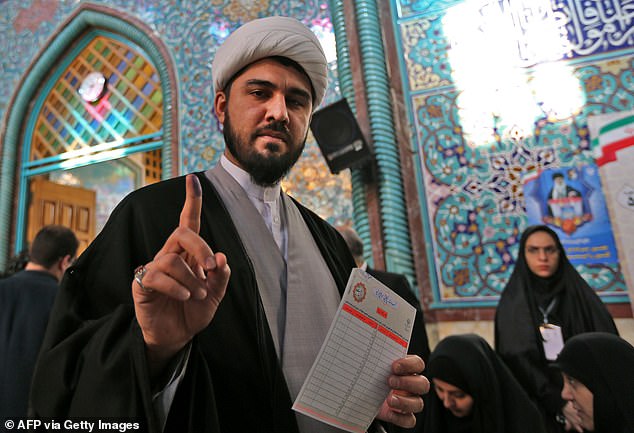 An Iranian man shows off his inked finger after voting at a polling station in Tehran today. Sitting President Hassan Rouhani is not expected to pick up adequate support 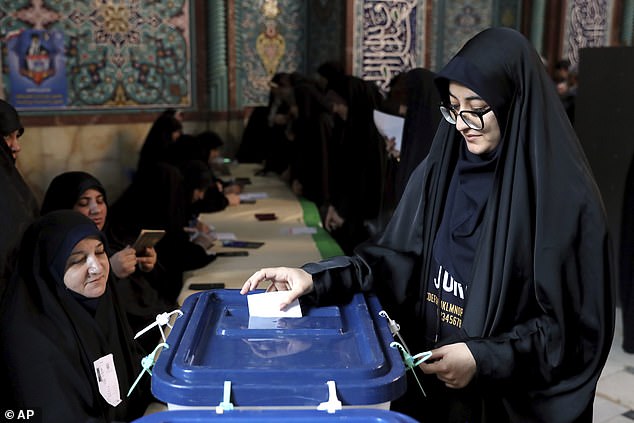 A woman votes at a polling station in Tehran, Iran. The election comes after the US pulled out of the nuclear deal in 2018 and following a ramping up in tensions over Qassem Soleimani

Experts predict a low turnout with rising voter apathy that they say will serve the conservatives at the expense of Rouhani, who was re-elected in 2017 promising more freedoms and the benefits of engagement with the West.

Iran has been hit by an economic slump and high inflation following harsh US sanctions after President Donald Trump pulled out of a landmark nuclear deal with Tehran in 2018.

‘Iran’s biggest problem is not having stability, peace and calm,’ said Amir Mohtasham, who is 38 and jobless.

‘Our elections are useless. Even the current parliament has 90 sitting MPs who are under investigation for financial corruption.’

Around half of the 16,033 hopefuls will contest the 290 seats up for grabs across 31 provinces after the Guardian Council barred thousands of would-be candidates, mostly moderates and reformists. 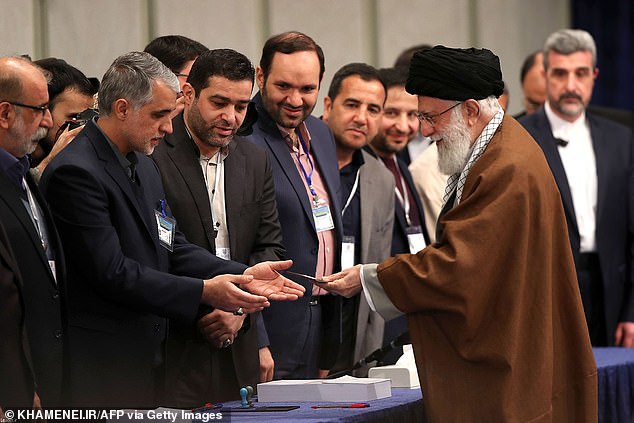 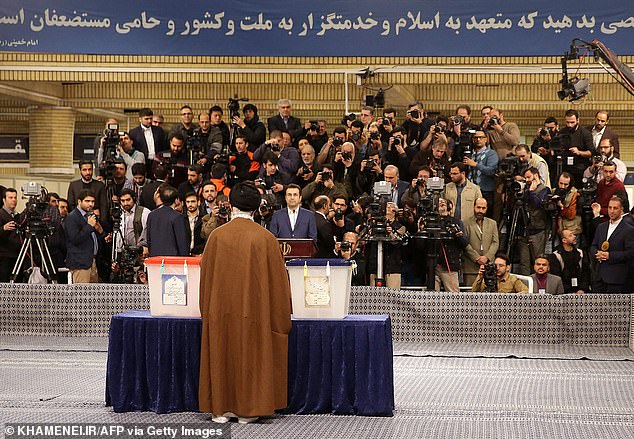 The supreme leader votes in front of a swarm of cameras and journalists. Conservative hardliners are expected to capitalise on anger against sitting president Hassan Rouhani 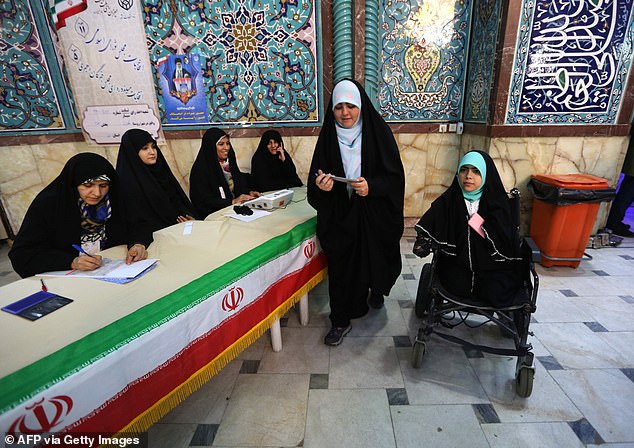 Two women arrive to vote at a polling station in Tehran today. Many are also expected to stay away from the polls

On Thursday, Washington slapped sanctions on five Iranian officials in charge of vetting candidates, including Ahmad Jannati, a powerful cleric.

‘The Trump administration will not tolerate the manipulation of elections to favour the regime’s malign agenda,’ said Treasury Secretary Steven Mnuchin.

The Guardian Council slammed the sanctions, saying they showed the United States’ disdain for democracy.

‘America’s regime has shown through illegal sanctions… on members of the Guardian Council that it has nothing to do with democracy,’ said its spokesman Abbas Ali Kadkhodaee, who was among those hit with sanctions.

‘We are now even more determined to safeguard the people’s vote,’ he tweeted.

On the eve of the elections, state media aired a short clip showing votes transforming into torpedoes hitting enemy navy ships closing in on Iran.

Hessameddin Ashena, Rouhani’s main adviser, warned on Twitter that abstention ‘increases (among other things) the possibility of a military aggression’. 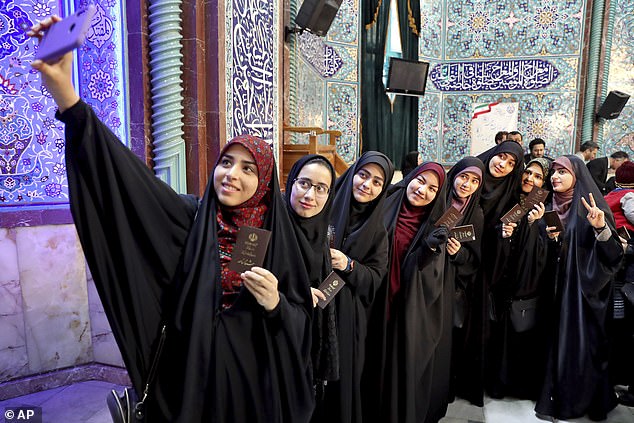 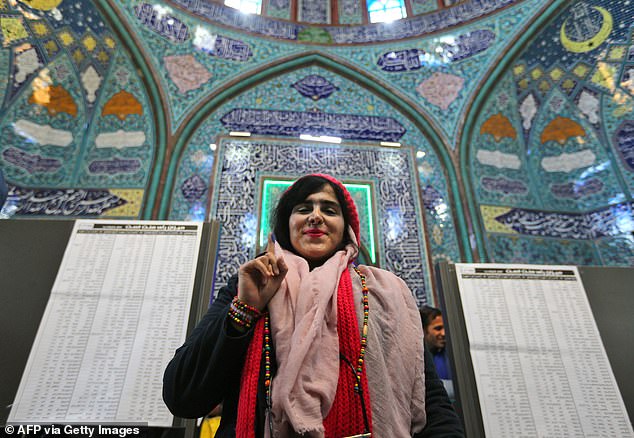 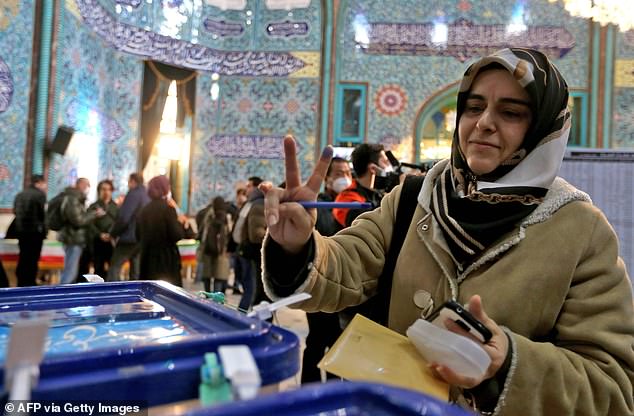 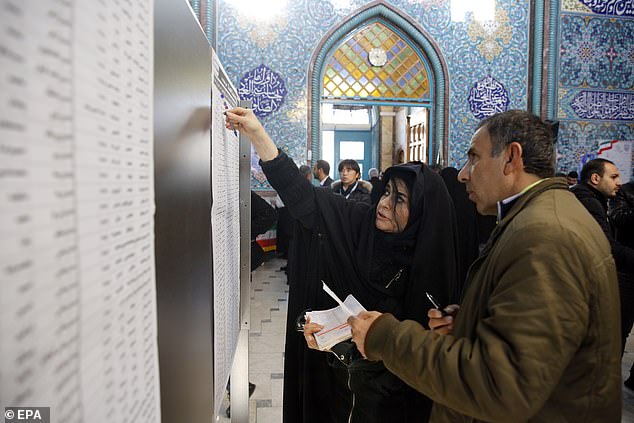 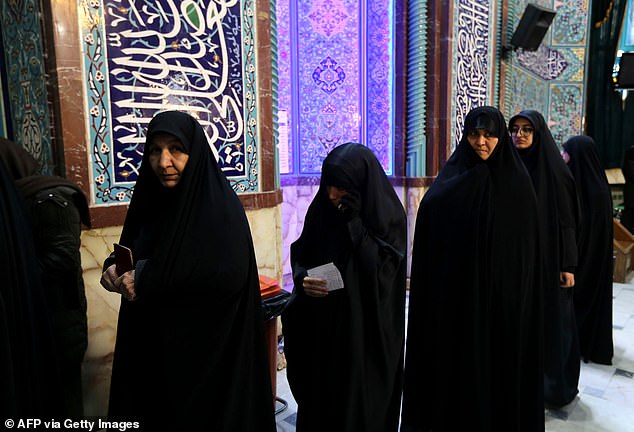 Turnout in Iran’s past 10 elections averaged 60.5 percent, according to the interior ministry.

The Guardian Council said it expected at least 50 percent of registered voters to cast ballots.

Many voters, however, have voiced disinterest.

‘We voted for Mr Rouhani with a dream, and then we didn’t achieve anything. So, in my opinion, people are not hopeful any more,’ said Mohammed, who spoke from his carpet shop and only gave one name.

‘I honestly don’t want to vote, because it won’t fix our problems and is of no use, and this election is only a formality just so they can show to the world that they are chosen by the nation, while it is not so,’ said Pari Aghazadeh, a fashion designer.

In November, demonstrations over petrol price hikes spread across Iran and turned violent before being crushed in a deadly crackdown.

Tehran and Washington have nearly gone to war twice in the past seven months, most recently after the US assassinated prominent Iranian general Qasem Soleimani on January 3.

The ‘martyrdom’ of the hugely popular general provoked an outpouring of grief in Iran. 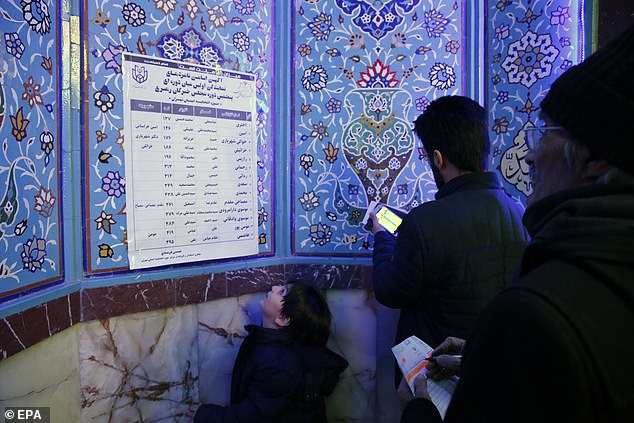 Iranians pictured filling out their ballot paper at a polling station in Tehran, the capital 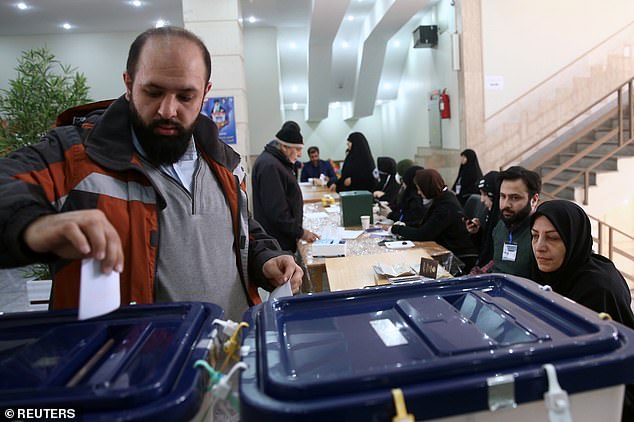 Citizens shown casting their votes at a polling station in Tehran, Iran, today for the election 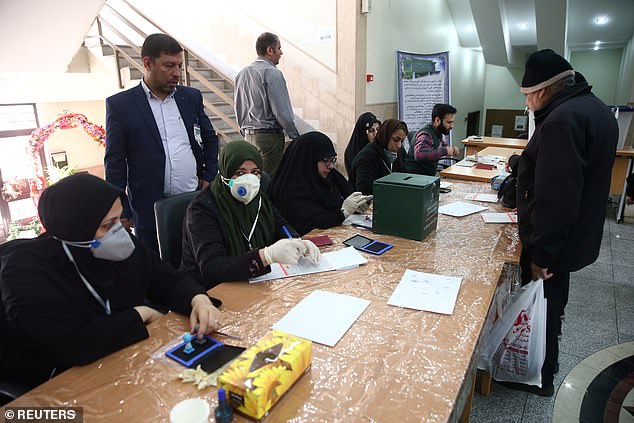 Voters cast their vote. Some workers were also pictured wearing face masks due to fears over the coronavirus outbreak. Five cases and two deaths have been reported in Iran

Millions of people turned out to mourn his death, but that unity suffered a blow after Iran finally admitted that it had shot down a Ukrainian airliner on January 8, killing 176 people.

The government sparked further anger by denying for several days that Iran was to blame, before owning up to a jittery reaction by a missile operator.

The disaster unfolded as Iran’s defences were on high alert in case the US retaliated to Iranian strikes hours earlier on American troops stationed in Iraq in response to the killing of Soleimani.

Voting for the parliament, or Majles, lasts 10 hours but can be extended. Final results are not expected before Sunday.

Apart from the parliament, voters will also choose replacements for deceased members of the Assembly of Experts, a 88-strong clerical body that appoints and monitors the supreme leader.