Prince William and Kate Middleton will build on the Queen’s work and focus on ‘remembrance and reconciliation’ during next month’s Republic of Ireland visit, Kensington Palace reveals

Kensington Palace has revealed new details of the Duke and Duchess of Cambridge’s upcoming official visit to the Republic of Ireland.

Prince William, 37, and Kate Middleton, 38, will arrive on Tuesday 3 March and will make visits to Dublin, Galway, County Meath, and County Kildare during their stay.

The trip hopes to highlights the strong links between the UK and Ireland post-Brexit, and Kate and William will get ‘a taste of modern and traditional Irish culture for themselves,’ the Palace confirmed.

It is the first time Kate and William have officially visited the Republic of Ireland. They have visited Northern Ireland twice in recent years.

Following in the foot steps of the Queen’s visit to the country in 2011, the tour will be centred around remembrance and reconciliation in an effort to strengthen the UK-Ireland relationship.

During their tour, Kate and William will meet with the President of Ireland Micheal D. Higgins, as well as the Taoiseach – the head of the Irish government – and senior political figures.

They will also meet with several local communities and witness their efforts to support youth initiatives.

One important aspect of the trip will revolve around wildlife conservation, with a focus on sustainable farming and marine conservation.

Culture will also play an important part in the couple’s visit, with Galway set to host the 2020 European Capital of Culture. 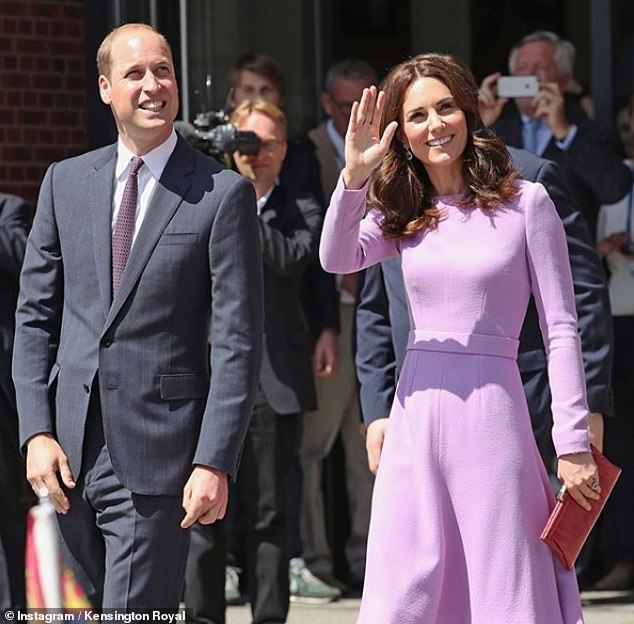 The royals will be treated to events highlighting the richness and diversity of Irish culture, art and sport during their time in the Eastern Irish city.

They will be following in the footsteps of Meghan and Harry, who visited the Irish capital on their first official overseas visit as a married couple in 2018, and Charles and Camilla who have visited Ireland five times since 2015.

The Queen made history in 2011 when she became the first British royal to visit the country for a hundred years for a four-day tour. 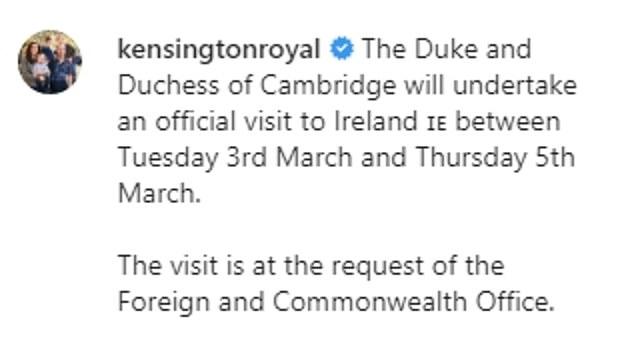 The Cambridge’s visit to Ireland will coincide with the Sussexes’ return to the UK for a series of last engagements next week.

Harry, 35, and Meghan, 38, are set to attend the Endeavour Fund Awards on March 5th in London.

The awards, which they already attended last year, recognise the achievements of nine nominees who are members of the Armed Forces Community that were injured or fell ill in service and used sports and challenges as part of their recovery or rehabilitation.

The couple’s final royal engagement will be on 9 March for the Commonwealth Day service, after which Meghan and Harry are believed to be returning to Canada, where they intend to live.