They fear the individuals have only mild symptoms and do not realise they are infected. The crisis deepened yesterday when 13 new cases were reported – bringing the number in the UK to 36.

The total has almost tripled in four days with the virus now reaching all corners of the British Isles.

But the South East is on the front line with experts trying to identify the sources of outbreaks in Essex, Surrey and West Sussex.

Five of the latest victims caught coronavirus within the UK – and not abroad – meaning it may already be too late to head off an epidemic.

Officials have not ruled out drastic measures such as locking down cities, closing schools, recalling retired doctors and banning large gatherings.

As Boris Johnson admitted the virus was a ‘significant challenge’:

Earlier today, the PM hailed frontline NHS staff as the UK’s ‘greatest asset’ in the face of the coronavirus outbreak. Pictured: Mr Johnson during a visit to a laboratory in PHE’s National Infection Service 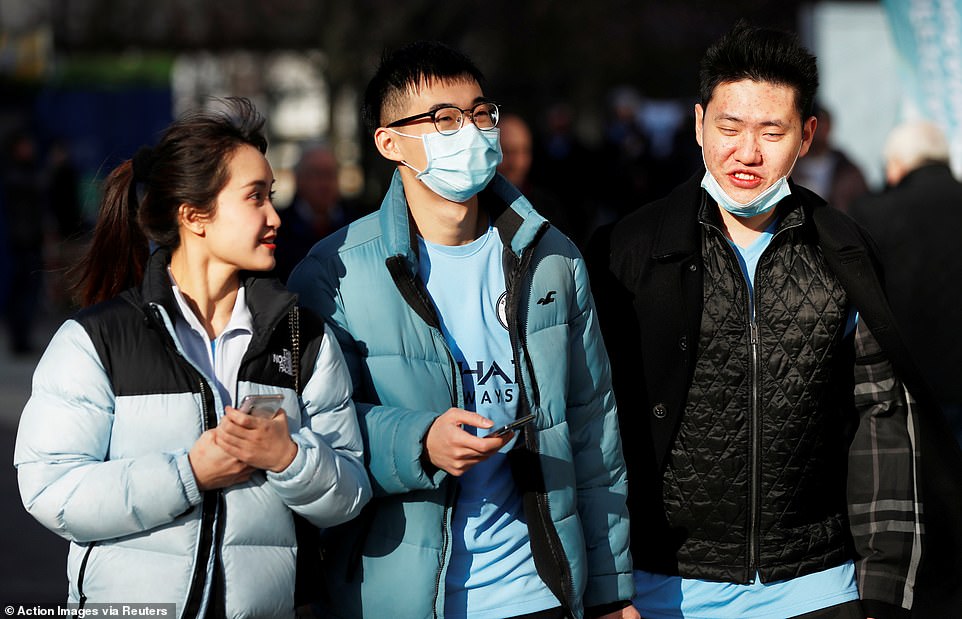 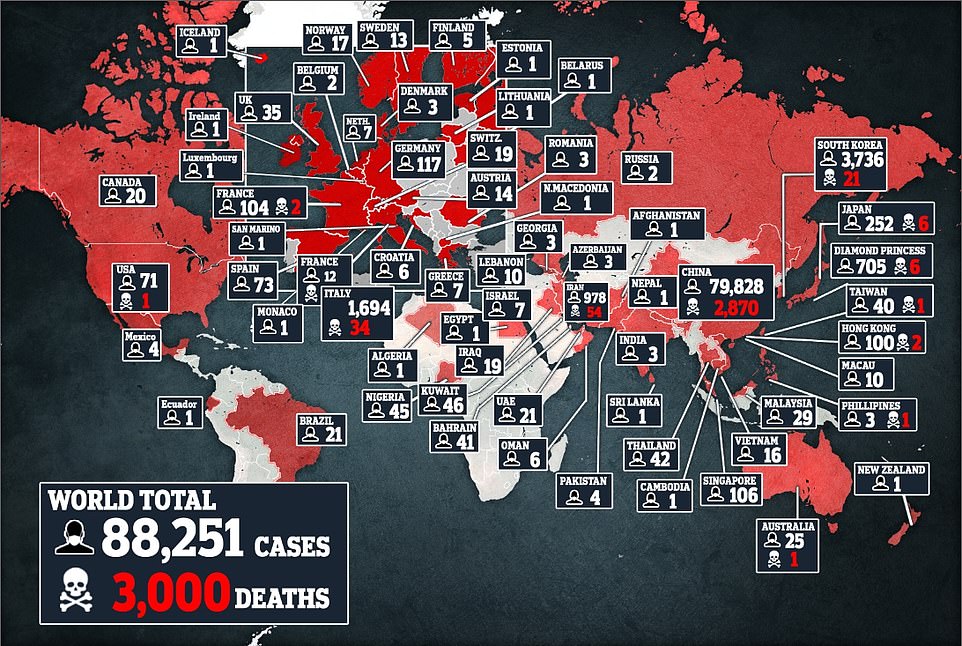 Five fatalities were announced in Italy today, taking its death toll to 34 as infection continues to cripple the country’s northern regions.

The outbreak is the second largest outside of mainland China and is steadily seeping across the continent, despite the infection hotbeds of Lombardy and Veneto on lock-down.

Ministers in Rome have taken drastic measures to firefight the epidemic, including scrapping public events and erecting police checkpoints around the 11 contaminated towns.

But despite the travel freeze from the virus-hit areas, where 50,000 citizens are in quarantine, cases scattered across Europe have been traced back to Italy.

Of the 13 new patients announced in the UK, seven had recently returned from Italy.

While coronavirus can be fatal – and roughly one in seven victims suffer very serious symptoms – for many the impact can be mild. This means victims could brush aside their symptoms, assuming it is a common cold.

Ministers had hoped they could contain the virus by tracking and isolating cases as soon as the victims returned from high-risk areas. But with 67 countries affected, this is becoming impossible.

Health Secretary Matt Hancock admitted it was inevitable that coronavirus would become endemic – the medical term for a virus becoming permanently resident in a country. He insisted the Government was still trying to do all it could to contain and isolate the virus.

If that fails the next stage will be to try to delay its peak until the summer months, when pressure on the NHS should be lower.

Professor Jonathan Ball of the University of Nottingham said spread of the virus ‘marked a new chapter for the UK’.

He added: ‘This is a virus that frequently causes symptoms very similar to mild flu or a common cold, and it’s easily transmitted from person to person. This means it can easily go under the radar.

‘It has a high likelihood of becoming one of the many respiratory viruses that circulate around the globe, peaking in winter months infecting those who are susceptible.’

Mr Hancock refused to rule out the scenario of entire cities being locked down – as has been done in China – although he stressed he wanted to avoid this in order to minimise disruption.

Mr Hancock said everyone had a duty to help stop the spread of coronavirus by regularly washing their hands. 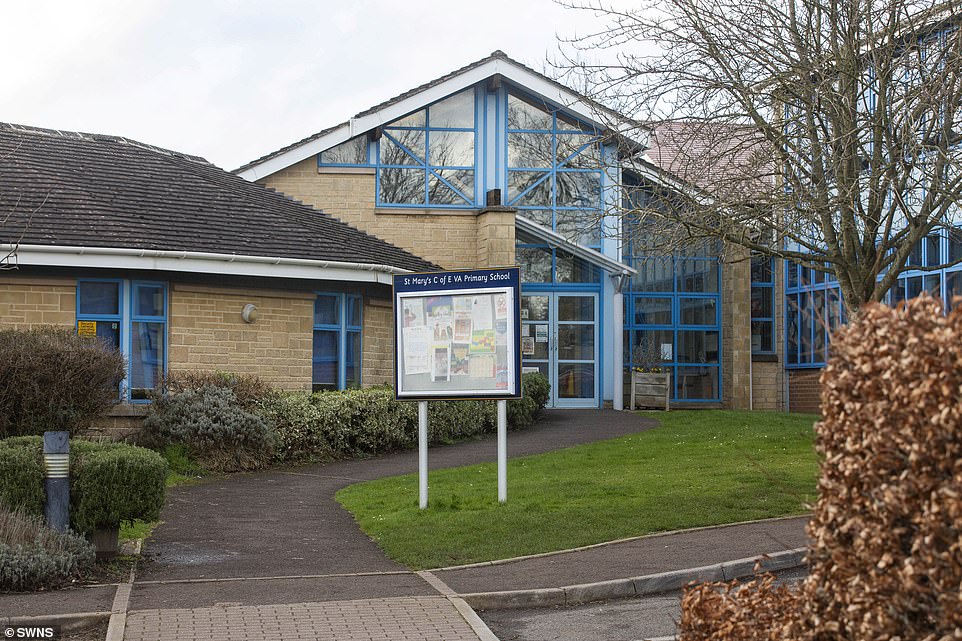 St Mary’s School in Tetbury (pictured) has confirmed a member of staff has tested positive for Covid-19. The case in the Cotswolds was among three identified on Saturday 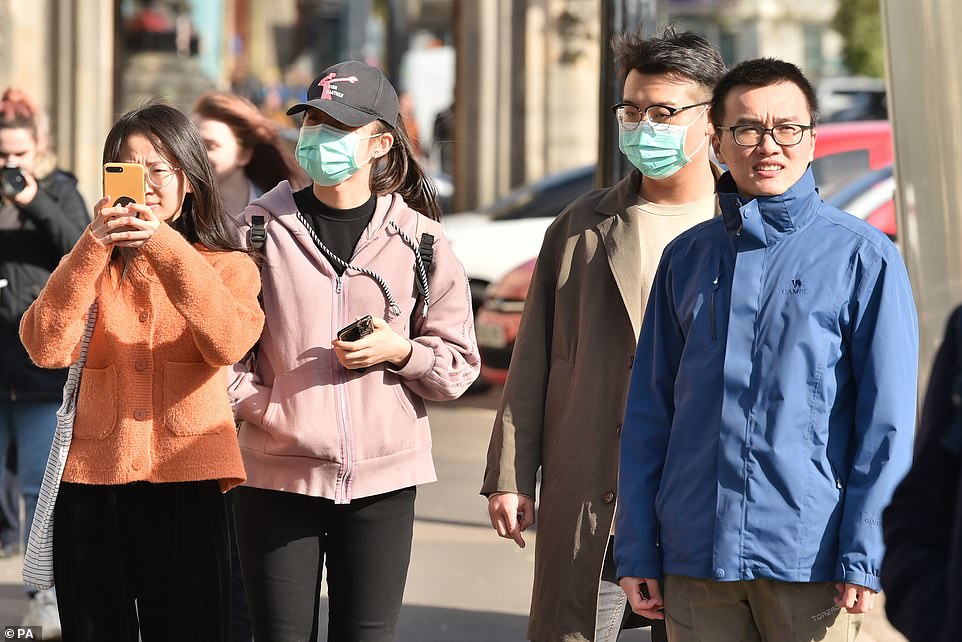 Pictured: People wearing face masks ahead of the St David’s Day Parade in Cardiff today as fears continue to sweep Britain while the coronavirus crisis unfolds

Markets were braced for futher falls today after a tenth was wiped off the value of Britain’s largest companies last week.

Travel agent TUI faces relegation from the FTSE100 index after its value dropped by a third in two weeks, as holidaymakers put off making bookings.

British Airways owner IAG and Easyjet have also been hit, losing just under a fifth of their value in a week.

A lockdown in London caused by a ‘significant increase’ in cases would cost the economy £500million per day, the Centre for Economics and Business Research warned.

Disruptions to supply chains have also raised concerns that UK car factories may have to close.

Bharat Pankhania, a senior clinical lecturer at the University of Exeter Medical School, said we needed to ‘relearn’ personal hygiene practices. ‘Most of us are on autopilot when we cough and sneeze,’ he said.

‘We need to relearn good practice of carrying tissues and remember to cough or sneeze into a tissue and dispose of that promptly in a bin, and then immediately wash and dry hands.’

Dr Pankhania said the transmission of the virus within Britain was significant but that the cases so far have remained ‘sporadic and isolated’.

Professor Paul Hunter of the University of East Anglia said: ‘Although it may still be possible to prevent a community wide epidemic this is looking increasingly unlikely and we should be prepared to cope with a more widespread epidemic on our shores.

‘If the disease does become endemic – and I think it is quite possible – then we would see new cases perhaps appearing each winter for the foreseeable future.’

On Friday the first victim of a UK-to-UK transmission was identified in the commuter town of Haslemere, Surrey.

Officials have been unable to find out how he contracted the virus, but in tracking his contacts they identified three other adults – one in Surrey and two in West Sussex – who had become infected.

In a completely separate case, a patient who had been infected within Britain was identified yesterday in Essex.

Officials are trying to understand how the two different groups of cases started. 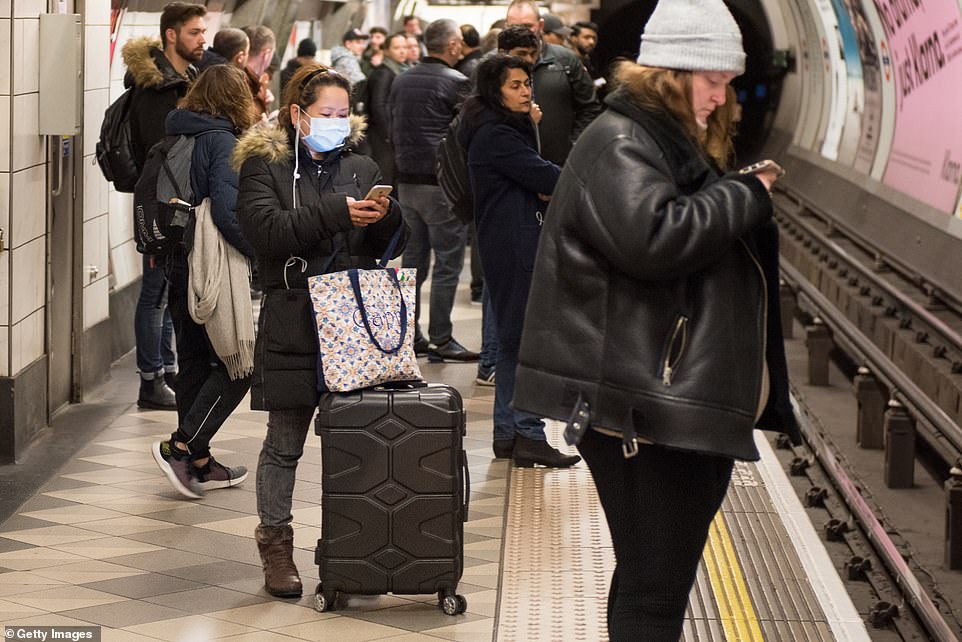 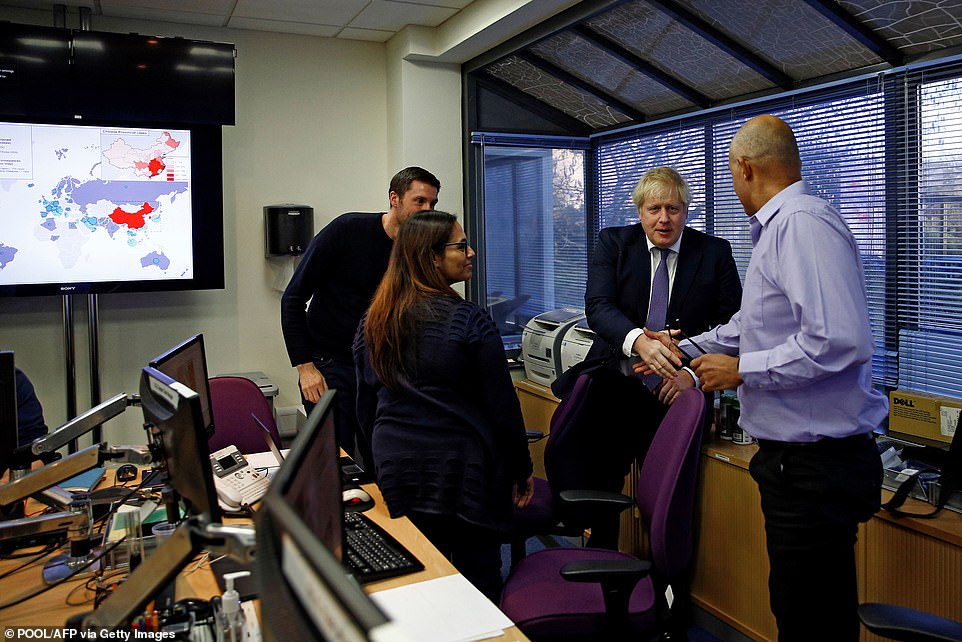 With 23 cases now confirmed in the UK and fears that up to 80 per cent of the population could be infected, the Prime Minister says he has no doubt that Covid-19 will be beaten. Pictured: Mr Johnson at PHE’s infection control HQ today 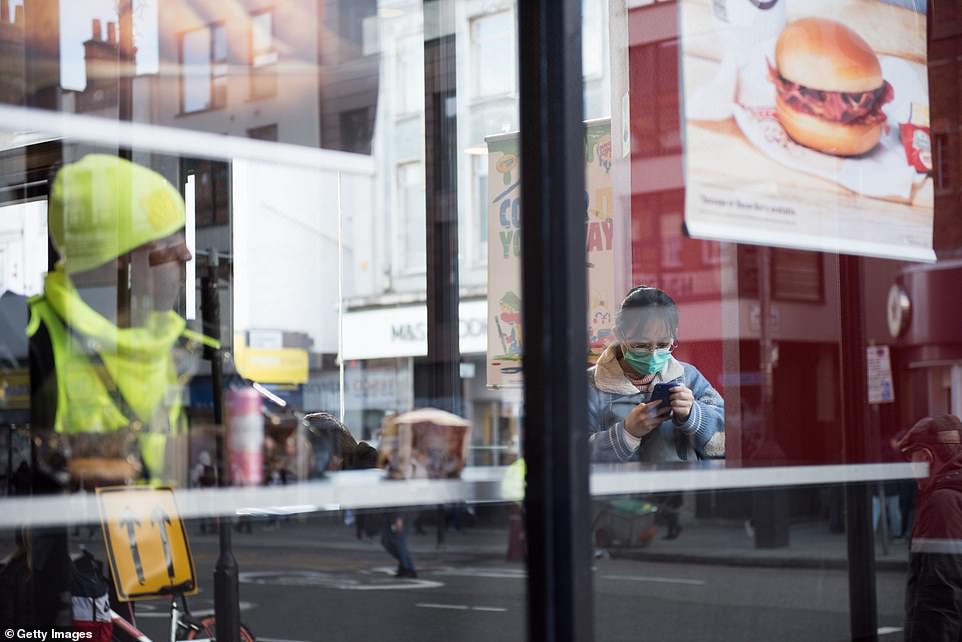 A woman wearing a face mask at a Burger King restaurant in London today. Twelve new cases of coronavirus were diagnosed in  England today

In an escalation of France’s response to the coronavirus outbreak, the country’s health secretary has called for a stop to the tradition of kissing on the cheeks.

The move came as fears over the virus closed the Louvre gallery in Paris yesterday.

The world’s most-visited museum was shut when the its 2,300 workers voted not to open to prevent infection.

And on Saturday, the French government banned all indoor gatherings of more than 5,000 people to stop the virus spreading.

France has reported more than 100 cases of the virus and two people have died.

In another case, a school worker tested positive at St Mary’s Primary in Tetley, Gloucestershire, after returning from northern Italy.

Another victim was identified as an employee of Willow Bank Infant School near Reading. Further cases were reported in London, Hertfordshire, Leeds, Bradford and Bury.

The Prime Minister said: ‘The number of coronavirus cases around the world is rising every day – and the UK is no exception.

‘There now seems little doubt that it will present a significant challenge for our country. But we are well prepared, and the Government and the NHS will stop at nothing to fight this virus. Our battle plan lays out in detail the measures we could use – if and when they are needed.’

Emergency powers set to be unveiled this week to help combat the virus include suspending rules about the maximum numbers of children that a single teacher can be responsible for.

The temporary measures will also allow for emergency medical registrations to create a ‘Dad’s Army’ of retired doctors to back up an already under-strain NHS.

Dr Susan Crossland, president of the Society for Acute Medicine, said a major outbreak would bring ‘immense stress’ to the NHS. ‘While the emergency planning measures put in place specifically for coronavirus have been good, the wider picture is one of grave concern,’ she said.

‘One of the huge problems we will see in the event of a widespread outbreak is a complete squeeze on elective surgery that will have huge implications for already dire patient waiting times and this directly relates to the under-funding of previous years.’

A Tayside resident who returned from Italy has become the first person in Scotland to be diagnosed with coronavirus, the Scottish Government said yesterday. The victim, who has not been named, has been admitted to hospital and is receiving treatment in isolation.

Scottish health officials are to begin testing some people with flu-like symptoms even if they have not visited affected areas.

In the wake of the first diagnosis in Scotland, Ms Sturgeon said: ‘Our first thoughts must be with the patient diagnosed with coronavirus, I wish them a speedy recovery.

‘Scotland is well-prepared for a significant outbreak of coronavirus but there is currently no treatment or vaccine.’

Ms Sturgeon will attend the COBRA meeting in London tomorrow, chaired by the Prime Minister.