Twitter tells ALL 5,000 employees around the world to work from home to avoid spread of coronavirus and makes it mandatory for those in Hong Kong, Japan and South Korea

Twitter has told all of its 5,000 employees around the world to work from home in an effort to stop the spread of the deadly coronavirus epidemic.

The social media platform’s decision to ask its staff to avoid the office follows similar requests by governments in virus hotspots.

Working from home will be mandatory for employees at the company’s South Korea, Hong Kong and Japan offices.

Twitter has told all of its 5,000 employees around the world to work from home in an effort to stop the spread of the deadly coronavirus epidemic. Pictured: Medical staff in protective gear arrive for a shift at Dongsan Hospital in Daegu, South Korea today

The outbreak has spread across the world since emerging in central China late last year, killing more than 3,100 people, infecting over 90,000, and prompting a wave of travel restrictions.

‘We are strongly encouraging all employees globally to work from home if they’re able,’ Twitter human resources chief Jennifer Christie said in a blog post on Monday. 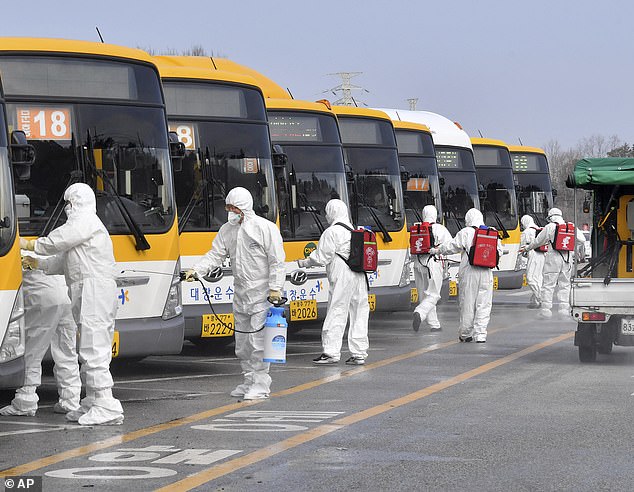 Working from home will be mandatory for employees at the company’s South Korea, Hong Kong and Japan offices. Pictured: workers wearing protective gear spray disinfectant as a precaution against coronavirus at a bus station in Gwangju, South Korea today

‘Our goal is to lower the probability of the spread of the COVID-19 coronavirus for us – and the world around us.’

Google tells staff at its Dublin HQ to work from home

Around 8,000 employees at tech giant Google’s Dublin headquarters were told to work from home today.

It comes after one worker had flu-like symptoms. They are being tested for the virus.

However, the company said the measure is to ‘test’ the ability of its staff to work remotely.

They said that ‘out of an abundance of caution’ staff have been told to work from home and to monitor their health.

The move affects all of Google staff at Dublin’s docklands office but not those based in the firm’s data centres in Sandyford and Eastpoint.

More than half of the cases have been linked to the Shincheonji Church of Jesus, a secretive religious group often described as a cult.

Japan’s government has urged the closure of schools nationwide and employers to give their staff permission to work remotely.

Most civil servants in Hong Kong returned to work on Monday after they were asked to work from home for a month. The financial hub has recorded 100 cases of the infection.

In a dramatic development yesterday, BA axed hundreds of short-haul flights to destinations across Europe, including Italy, France, Germany and Ireland, from March 16 to 31.

The airline also scrapped 12 long-haul flights from Heathrow to New York, its busiest and most profitable route, along with dozens of services to China, Hong Kong, Singapore and Seoul.