A quarter of Britons don’t trust their neighbours and believe the local community is in decline, report suggests

By Claire Ellicott for the Daily Mail

Most people think their communities are in decline and many no longer trust their neighbours, a report found.

Researchers also said the number of post offices, pubs and libraries has drastically fallen in the past few decades.

Launching a cross-party review into community, Conservative think tank Onward said repairing the social fabric of our neighbourhoods is the ‘defining challenge of this Parliament’.

While well-being statistics are improving nationally, trust and life satisfaction is falling locally.

Most people think their communities are in decline and many no longer trust their neighbours, a report found (stock image)

One in four people now say that none or few of their neighbours can be trusted, up from one in seven in 2012.

Over the same period, the share of people who feel their area has become a worse place to live has increased by nearly a third to a quarter.

Polling by the think tank and PR firm Hanbury Strategy shows membership of local organisations has fallen from 61 per cent in 1993 to around 50 per cent today.

The research also found that the perception of community decline is most pronounced among younger generations.

The largest fall in volunteering are among those aged between 16 and 34 years old. 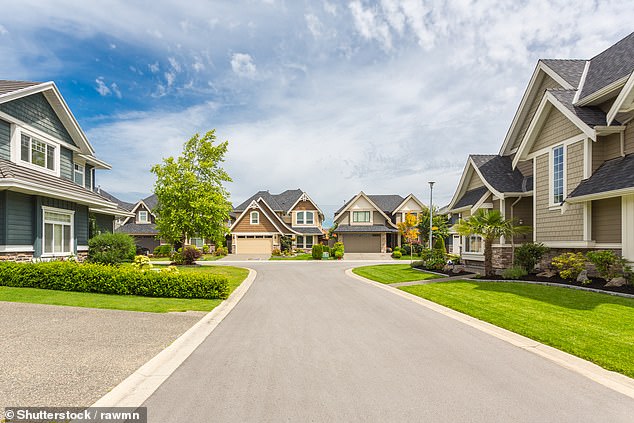 Researchers also said the number of post offices, pubs and libraries has drastically fallen in the past few decades (stock image)

The steering group will bring together politicians from across the political spectrum and civic leaders with deep expertise of strengthening communities on the ground.

Will Tanner, Director of Onward, said: ‘Last year’s election was a ballot on belonging. Many of the Red Wall towns and working class voters who defied history to lend their votes were driven by the fraying social fabric of their place: the deteriorating high street, fragmenting community or disconnected neighbourhood.

‘This makes repairing the social fabric of local communities the defining mission of this Parliament: unless politicians of all parties work to give voters back a sense of local identity and ownership, their votes will increasingly go elsewhere.’