A father has released shocking footage of machete-wielding thugs trying to break into his home while his young daughter cowers inside.

The footage, filmed from the upstairs of his home, shows the men kicking the back door at his house in Crofton, near Wakefield, West Yorkshire, at 10pm on Monday.

During the incident the group also hit a window and at one point peer inside and say: ‘There’s a little girl in there,’ before carrying on with their efforts.

Dramatic video shows the masked men kicking the backdoor after they run into the garden. However some of the group hang back, deciding to stick close to the left-hand corner of the house.

As three of the four men move out of sight, a man wearing a camouflage jumper stays behind to try and look through a window.

He places one hand on the glass, with the other holding onto the machete, before kicking door again, this time turning around and using all his strength.

The video then shows another man holding the machete while the man in camo fiddles with the door handle.

The group are seen kicking and hitting at the backdoor of a home in Crofton, near Wakefield, West Yorkshire, with a machete as a terrified young girl cowers inside

When the door doesn’t give way one of them tries to hit it with a machete and they again try to twist the handle.

The group also hit the smaller window with the machete and turn around to kick the door in once more in a final desperate attempt to gain access.

Following the attempted break-in the father, who lives at the home and does not want to be identified, offered a £1,000 reward to try and identify the group.

West Yorkshire police told MailOnline: ‘Officers are investigating a report of attempted burglary at a property in Crofton on 2 March at around 10pm.

‘Four/five males approached the property and cracked a window and caused damage to the door. They made off empty-handed and without gaining entry to the property. Enquiries remain ongoing. 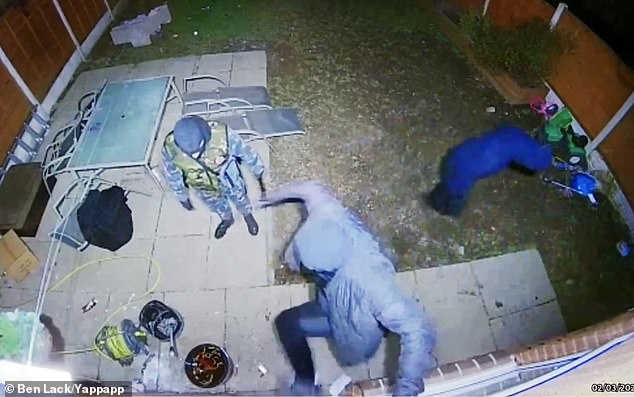 During the attempt to get into the home, the men turn around and kick the bottom of the door