Six tins of tripe, 32 bottles of perfume and a miniature railway are among the most ‘weird and wonderful’ items left behind by Brits on Uber journeys in the last year.

Mobile phones, wallets, bags, keys, headphones and passports are the items most commonly left behind by riders, the company also revealed.

London is the most forgetful city in the UK when it comes to items commonly left in Uber vehicles, followed by Newcastle, Glasgow, Edinburgh and Brighton.

However, Uber GPS tracking and 24-hour customer support means many items that are left behind are returned.

A box of chicken (left), a green watering can and a vegan sandwich platter are just a few of the oddest items that passengers left behind in Ubers last year

TOP 10 ITEMS LEFT ON AN UBER

‘We’ve all experienced that sinking feeling when you realise you’ve left something behind, but there’s no need to fret,’ said Fred Jones, head of new mobility at Uber UK.

‘Every Uber journey is recorded with the details of your licensed private-hire driver so you’re more likely to be reunited with your belongings.’

Its list of 25 weird and wonderful items in the UK also included a bucket of green Sicilian olives, an electric breast pump, a vegan sandwich platter, a pile of celebrity magazines, a green watering can and £50 of steak.

One unfortunate passenger also left behind an engagement ring and a wedding ring on the same journey. 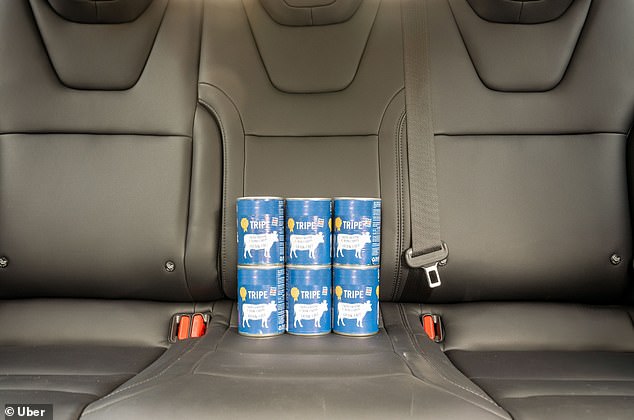 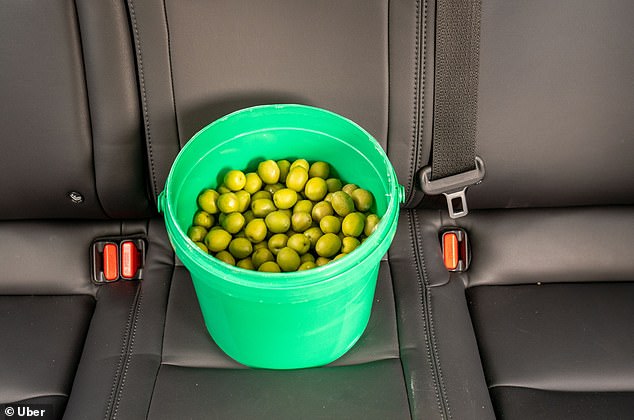 Pictured, a bucket of green Sicilian olives, which made Uber’s top 25 list of weird and wonderful items left behind by UK users of the ride-sharing app

HOW TO RETRIEVE AN ITEM LEFT IN AN UBER

Passengers who leave their items behind on a journey can immediately contact their driver through the app.

1. Go to “Your Trips” in the Uber app and select the trip where you left something.

2. Select ‘I lost an item’ and ‘Contact driver about a lost item’.

2. Enter the phone number you would like to be contacted on – Uber will call this number and connect you directly with your driver’s mobile number.

3. If your driver confirms that the item has been found, coordinate a time and place to meet for its return.

4. If your driver doesn’t pick up, leave a detailed voicemail describing your item and the best way to contact you.

Bristol, Nottingham, Belfast, Manchester and Liverpool rounded out the top 10 of most forgetful UK cities.

The report also revealed that the most forgetful hour is between 11pm and 12am, when passengers are likely to have had their memory impaired by the effects of alcohol, followed by 10pm to 11pm.

The most common day for people to leave things behind, based on reports from Uber customers, is Saturday, closely followed by Friday.

The index found that Sunday, December 8 had the most reported lost items, as many party-goers would have awoken from their first festive celebration of the season the previous night.

This date was followed by December 14 – in the midst of the festive work party season – New Year’s Day, January 26th – the day after Burns Night and also when people ‘give up on Dry January after the first payday of the year’ – and February 3, which was the first Thursday night after dry January ended.

But the UK doesn’t even come into the top 10 most countries in Europe for items left in an Uber, the index also revealed. 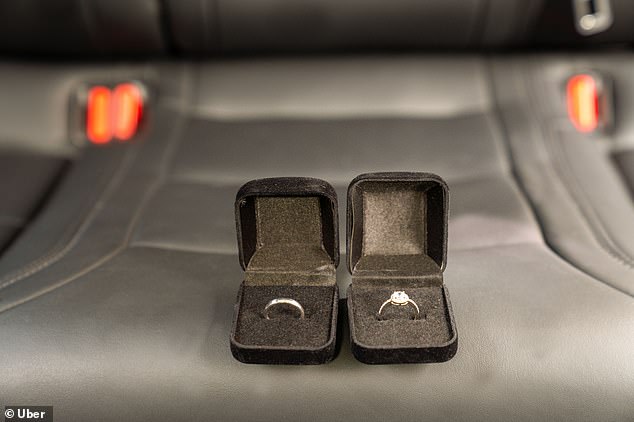 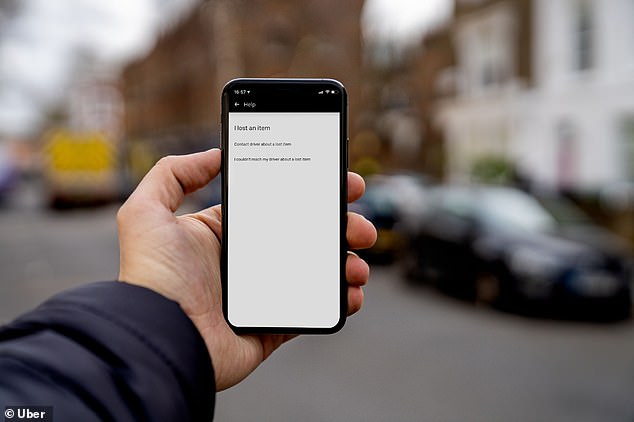 Every trip booked using the Uber app is GPS-tracked to ensure there is a record of the licensed private-hire driver, passenger and journey taken so their possessions can be returned

On Uber journeys overseas, bizarre items left behind by passengers have included live pet mice, a pair of guinea pig slippers and a bag of three stuffed elves.

As for the most forgetful cities in the US, the title was taken by Lubbock, Texas, followed closely by Oxford, Mississippi.

The company also said that in the US it saw a more than 21 per cent increase in lost Apple AirPods from last year.

‘The best way to retrieve a lost item is to call the driver – but if you leave your phone itself in an Uber, you can login to your account on a computer,’ Uber says.

Uber also said that the ‘most unique’ items left behind stateside included a cat paw print from the vet, a lanyard that says ‘virginity rocks’, a bubble machine, cat tarot cards, a hard boiled egg and ‘a six pack of much needed toilet paper’.

2. A bucket of green Sicilian olives

11. A green watering can

19. A tub of washing detergent

23. An engagement and wedding ring (on the same journey)