By Ariel Zilber For Dailymail.com

Researchers analyzing the first-ever image taken of a black hole taken by a powerful telescope last year announced this week that they have analyzed new data that sheds light on its mass, rotation, and shape.

Last April, the Event Horizon Telescope (EHT) team at Harvard-Smithsonian Center for Astrophysics was able to capture the silhouette of the super massive black hole that lies at the center of Messier 87 (M87), a galaxy that lies 55 million light years away.

The EHT project, which was first started more than 20 years ago, hooks up eight radio telescopes in Arizona, Spain, Mexico, Antarctica and other locations to create a virtual telescope approximately the size of the Earth. 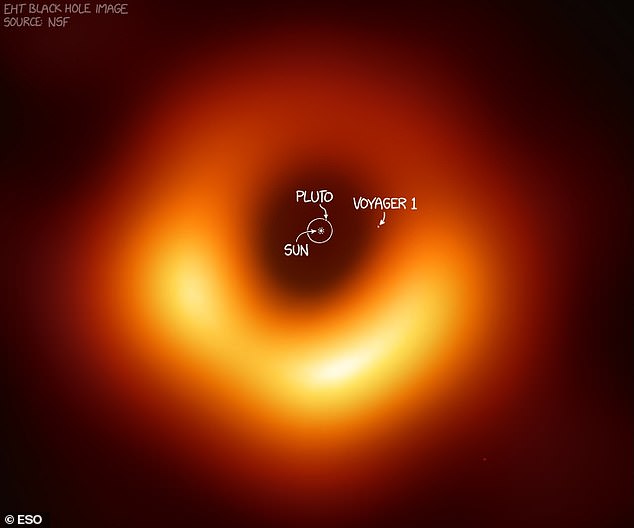 This galaxy is nearly 55 million light-years from Earth and the black hole at its center weighs as much as 6.5 billion suns – dwarfing our solar system

Scientists hope to map these two black holes’ contours by capturing images of their event horizon – or the ‘point of no return’ beyond which nothing, including light, can escape.

Last spring, the EHT team announced that it successfully photographed the M87 black hole. The photograph was the highest resolution image ever taken of one.

While the image was a historic first, the immense distance of 55 million light years made it quite fuzzy, even with all of the telescopes being put to use on Earth.

WHAT IS AN EVENT HORIZON?

The event horizon is theoretical boundary around a black hole where not light or other radiation can escape.

When any of that material gets too close to the edge of the hole, known as the event horizon, its atoms are ripped apart.

The nuclei disappear below the horizon, the much lighter electrons get caught up in the black hole’s intense magnetic field and tosses them around at high speed.

This twisting motion causes them to release photons, which is the main source of emission from matter close to the black hole.

This week, scientists used Einstein’s Theory of Relativity in order to simulate what high-resolution images of a black hole would look like from a distance.

The result is a set of ‘substructures’ or ‘subrings’ that were able to be detected due to what experts say is the black hole’s tendency to bend photons, or particles of light, as they approach the center.

‘The image of a black hole actually contains a nested series of rings,’ said Michael Johnson, a researcher with the Harvard-Smithsonian Center for Astrophysics.

‘Each successive ring has about the same diameter but becomes increasingly sharper because its light orbited the black hole more times before reaching the observer.’

Researchers say that they can glean more information about the physical measurements of the black hole using data from the ‘photon ring’ created by the strong gravitational center that bends light. 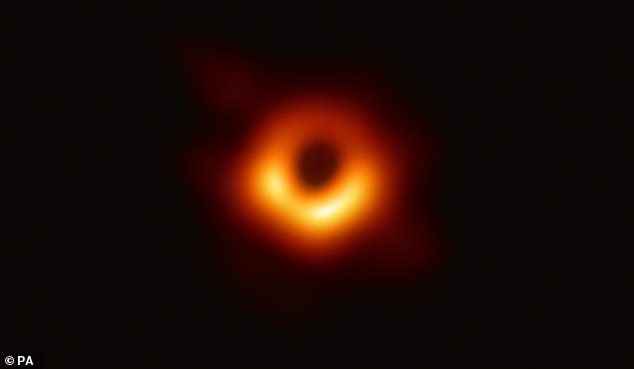 Scientists have lifted the veil on the first images ever captured of a black hole’s event horizon. In a highly-anticipated string of press conferences held simultaneously around the world, the team behind the Event Horizon Telescope revealed the findings from their first run of observations. The glowing orange ring shows the event horizon of M87, in the Virgo galaxy cluster

‘This is an extremely exciting time to be thinking about the physics of black holes,’ says Daniel Kapec from the Institute for Advanced Study.

‘Einstein’s theory of general relativity makes a number of striking predictions for the types of observations that are finally coming within reach, and I think we can look forward to lots of advances in the coming years.

‘As a theorist, I find the rapid convergence between theory and experiment especially rewarding, and I hope we can continue to isolate and observe more universal predictions of general relativity as these experiments become more sensitive.’

The results of their work were published in the latest edition of Science Advances.

WHAT ARE BLACK HOLES?

Black holes are so dense and their gravitational pull is so strong that no form of radiation can escape them – not even light.

They act as intense sources of gravity which hoover up dust and gas around them. Their intense gravitational pull is thought to be what stars in galaxies orbit around.

How they are formed is still poorly understood. Astronomers believe they may form when a large cloud of gas up to 100,000 times bigger than the sun, collapses into a black hole.

Many of these black hole seeds then merge to form much larger supermassive black holes, which are found at the centre of every known massive galaxy.

Alternatively, a supermassive black hole seed could come from a giant star, about 100 times the sun’s mass, that ultimately forms into a black hole after it runs out of fuel and collapses.

When these giant stars die, they also go ‘supernova’, a huge explosion that expels the matter from the outer layers of the star into deep space.