The FTSE 100 opened up 4 per cent today as investors reacted to Boris Johnson’s UK lockdown and the US Federal Reserve unveiled a huge bond-buying programme to support the American economy.

The index of London’s leading companies opened 198 points up at 5,191 this morning after Asian markets also surged overnight.

It comes after more than £60billion was wiped off the FTSE 100 yesterday – taking total losses since the coronavirus pandemic up to £793billion.

Boris Johnson has placed the UK on lockdown to tackle the coronavirus, threatening police fines for anyone who ignores new measures including a ban on public gatherings of more than two people.

The Prime Minister detailed a short list of reasons why individuals can leave their homes as he ordered the immediate closure of all shops selling non-essentials items yesterday evening.

People wearing masks walk past a display showing the closing information of Tokyo’s Nikkei Stock Average in Tokyo today. It soared 1,205 points, or 7.13 per cent, to close at 18,092

He ordered people to only leave the house to shop for basic necessities ‘as infrequently as possible’ and to perform one form of exercise a day.

Battered shares of Carnival Corp jumped 8 per cent to the top of the index, while BP and Royal Dutch Shell gave the biggest boost as oil prices jumped.

But home furnishings retailer Dunelm Group dropped 7 per cent after saying it would draw down all of its available credit and cancel its interim dividend payment due to the coronavirus pandemic.

The Milan FTSE MIB gained 5 per cent to 16,332 as investors were reassured by the easing number of deaths in Italy.

City Index analyst Fiona Cincotta said: ‘European stocks are bounding higher on Tuesday, as the mood in the market improves. 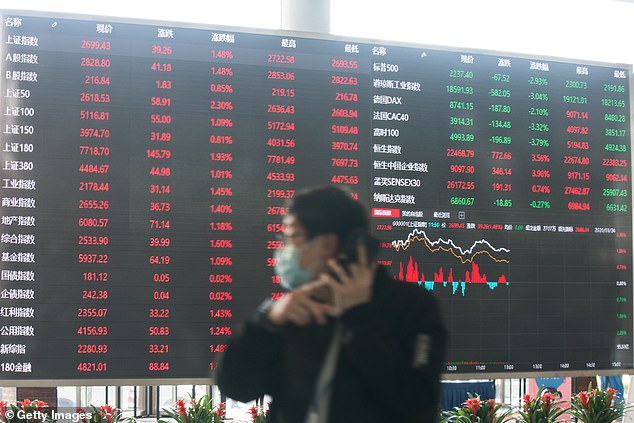 ‘The number of deaths in Italy from coronavirus dipped for a second straight day, fuelling hopes that the devastating outbreak may have peaked there.’

She added: ‘The data is providing a glimmer of hope that the unprecedented national lock down, imposed two weeks ago is at last having an effect.

‘The news comes as Boris Johnson finally put the UK into lock down last night and as the number of deaths in Spain jumps.’

The global number of coronavirus deaths has topped 16,200, with more than 360,000 declared infections in 174 countries and territories.

While most of the planet goes into lockdown, traders gave a massive thumbs up to the US central bank’s pledge to essentially print cash in a move not seen since the global financial crisis more than a decade ago. 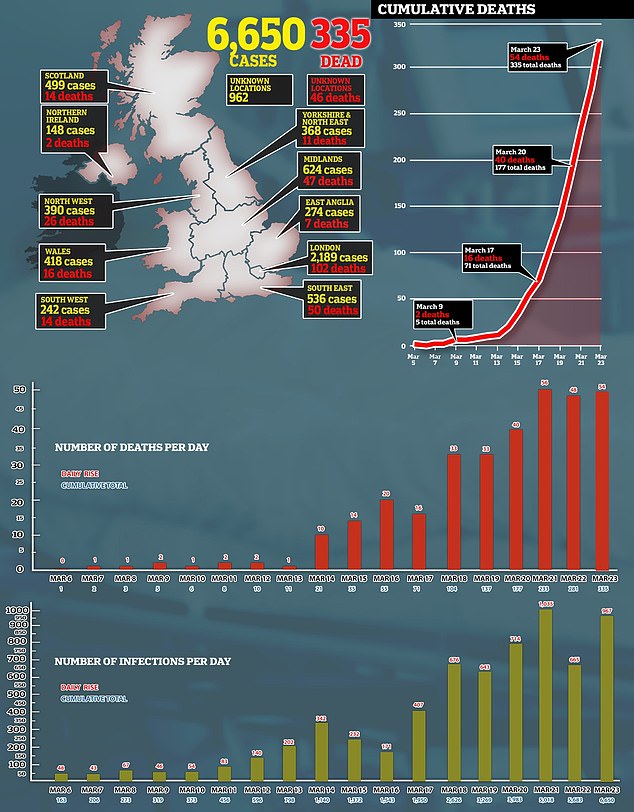 The Fed, which has already slashed interest rates to record lows, said it will buy unlimited amounts of Treasury debt and take steps to lend directly to small- and medium-sized firms hammered by restrictions across the country.

Equities in Asia rallied overnight with Tokyo ending more than 7 per cent higher.

The Nikkei was given extra lift by a Bank of Japan decision to embark on its own massive bond-buying scheme.

Seoul was up more than 8 per cent, Hong Kong, Sydney, Singapore and Taipei each rose more than 4 per cent, and Wellington lifted more than 7 per cent.

Shanghai and Mumbai added 2 per cent, Bangkok more than 1 per cent and Manila 0.7 percent, though Jakarta fell almost 1 per cent.

AxiCorp’s Stephen Innes called the Fed’s move ‘the most significant monetary experiment in the history of financial markets’.

‘Asian investors like what they see from an all-in Fed, which is being viewed in a very impressive light for both Main and Wall Street, even as the US congress dithers,’ he added.

Chancellor Rishi Sunak went some way to providing this certainty last week with his promise to pay 80 per cent of the wages of employees who were forced out of work, up to £2,500 a month.

While investors have been hoping the market pessimism soon bottoms out, some experts think the falls could continue for some time.

The International Monetary Fund (IMF) called for ‘solidarity’ between countries.

Speaking after a meeting of the G20’s finance ministers and central bank governors, its managing director Kristalina Georgieva said: ‘The human costs of the coronavirus pandemic are already immeasurable and all countries need to work together to protect people and limit the economic damage. This is a moment for solidarity.’