Hundreds of residents across the United States are either lining up in frigid temperatures on foot or waiting patiently in their cars to be tested for the coronavirus.

Drive-thru sites have been opening in several states such as New York, New Jersey and Illinois, in order to make it quicker and safer to test people.

But the system has been marked by inconsistencies, delays, and shortages. Photos taken on Tuesday show massive lines of people on foot snaking around a hospital in New York City.

New Yorkers were seen bundled up as they braved spring temperatures that ranged from the low 40s to the low 50s. Some wore masks and tried to abide by the social distancing requirement of 6 feet.

Many people who have symptoms and a doctor’s order have waited hours in lines just to get tested.

In other parts of the US, residents of New Jersey, Illinois and Washington, DC, were seen waiting in long drive-thru lines for testing. Doctors and nurses in protective equipment were seen prepping tests and reaching into vehicles to administer tests on Tuesday.

Meanwhile, California has admitted that the state has fallen behind New York and other hot spot states when it comes to testing for the coronavirus and tracking cases.

New Yorkers were seen bundled up as they braved spring temperatures on Tuesday. Some wore masks and tried to abide by the social distancing requirement of 6 feet 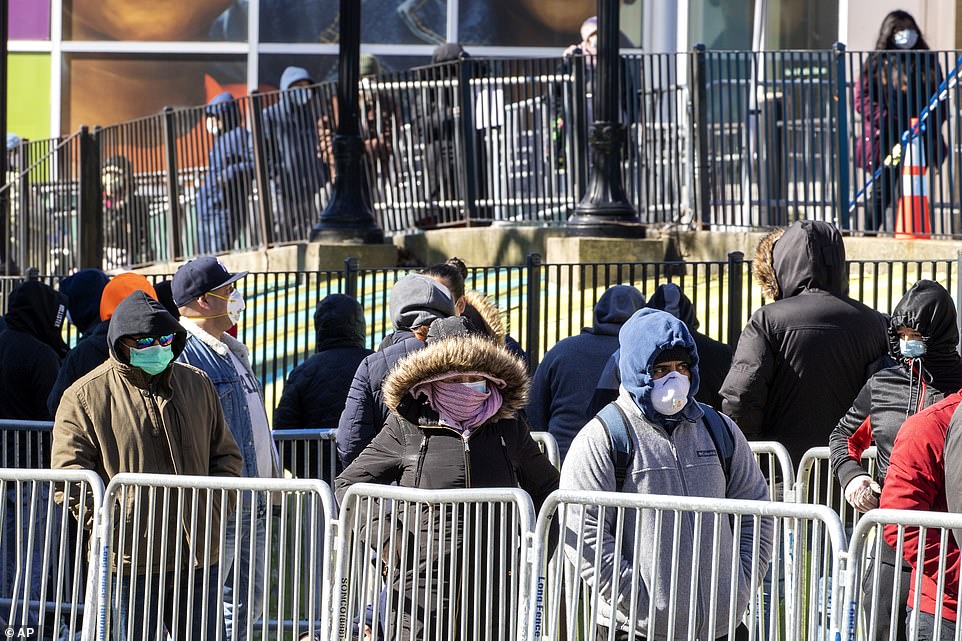 Many people who have symptoms and a doctor’s order have waited hours in lines just to get tested. New YYorkers are seen lined up outside Elmhurst Hospital Center on Tuesday 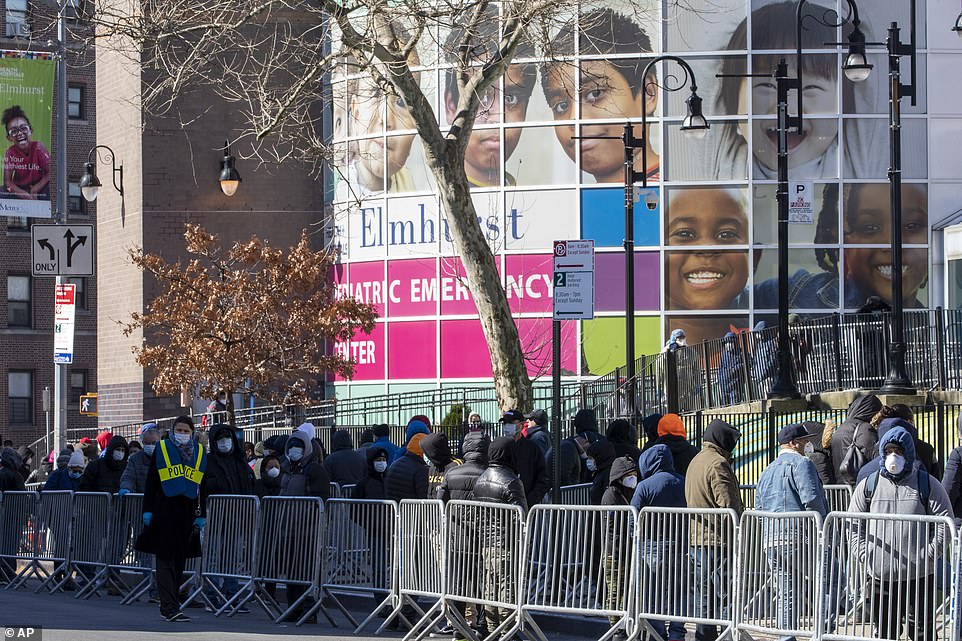 New York City has more than 13,000 confirmed coronavirus cases as residents of the Big Apple flocked to a testing location in Elmhurst, Queens, on Tuesday 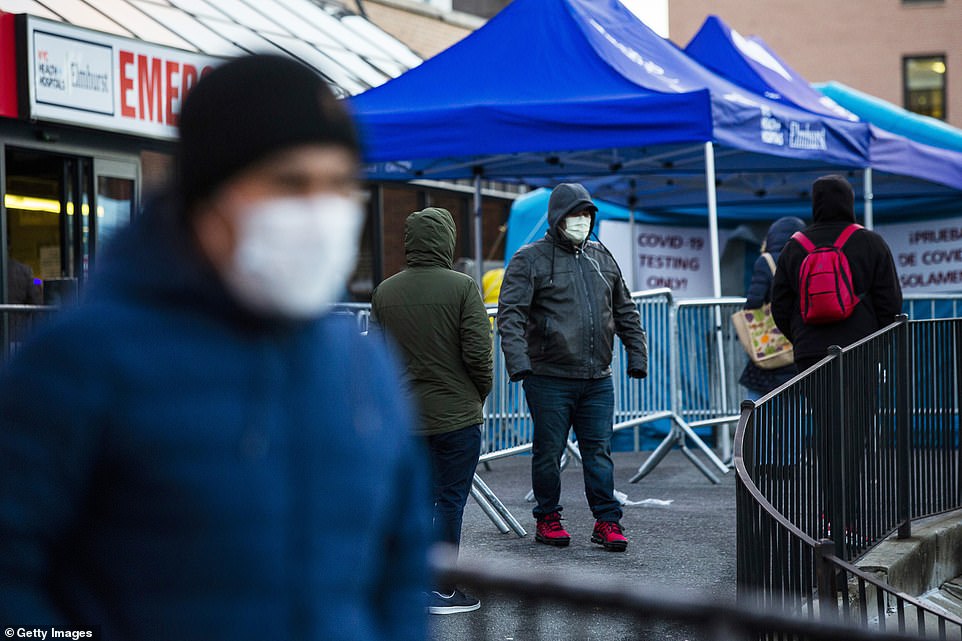 People line up to get a test at Elmhurst Hospital in Queens, New York. There are now more than 35,000 cases of COVID-19 in the United States as governments scramble to contain the spread

President Donald Trump had previously promised that states and retail stores such as Walmart and CVS would open drive-thru test centers.

And several drive-thru test sites have popped up in locations in more than 30 states — in state parks and parking lots, next to medical centers and universities, at the Mississippi state fairgrounds and near where the Jacksonville Jaguars play.

The governor of Maryland this past week ordered vehicle emission inspection programs across the state to stop so that the locations can be used as drive-thru centers to test for the virus.

But the testing centers haven’t been perfect. Some have opened only to be shut down shortly afterward because of shortages of supplies and staff.

Health officials had said the drive-up testing facility had the capacity to take in 2,500 specimens a week.

But authorities were forced to close off the entrances to the site just four hours after opening due to a surge in demand.

Dr Brett Giroir, the federal health official tasked with overseeing testing, said at a White House briefing Saturday that so far about 195,000 people have been tested in the US. That figure does not include some people who have been tested in private labs and those who were tested on Monday and Tuesday. 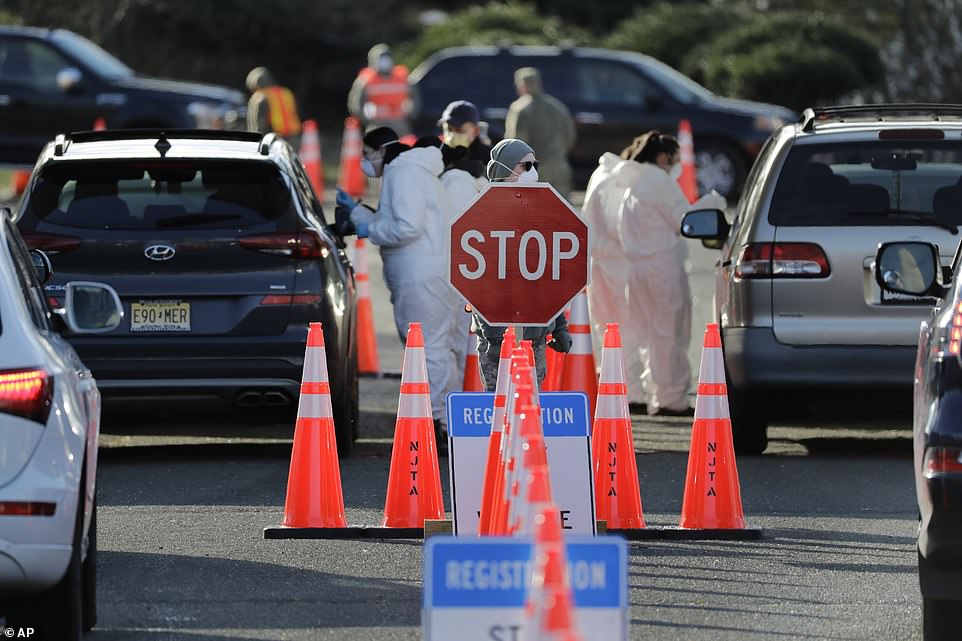 In other parts of the US, residents of New Jersey (testing pictured Tuesday), Illinois and Washington, DC, were seen waiting in long drive-thru lines for testing 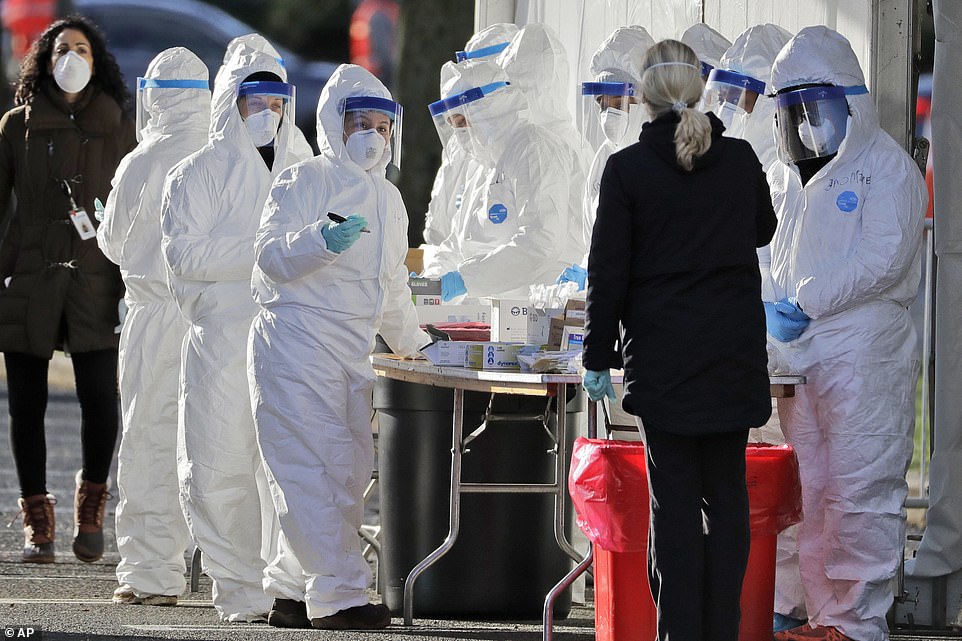 Medical personnel (pictured in Holmdel, New Jersey, on Tuesday) in protective equipment were seen prepping tests and reaching into vehicles to administer tests on Tuesday 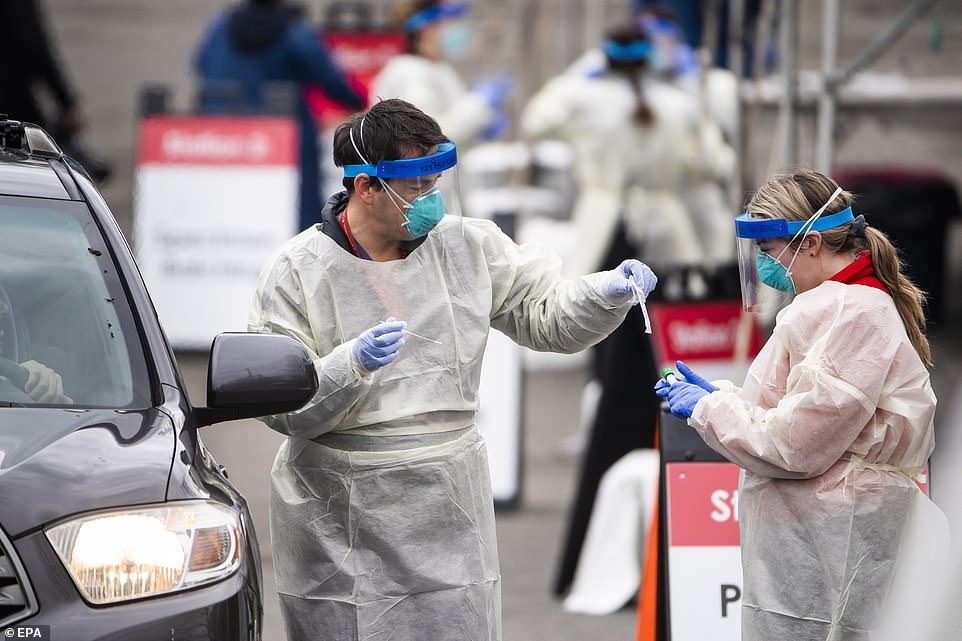 Medical staff and volunteers from Children’s National Hospital test children, who arrived with a doctors referral, for the coronavirus at a drive-thru test site in Washington, DC, on Tuesday 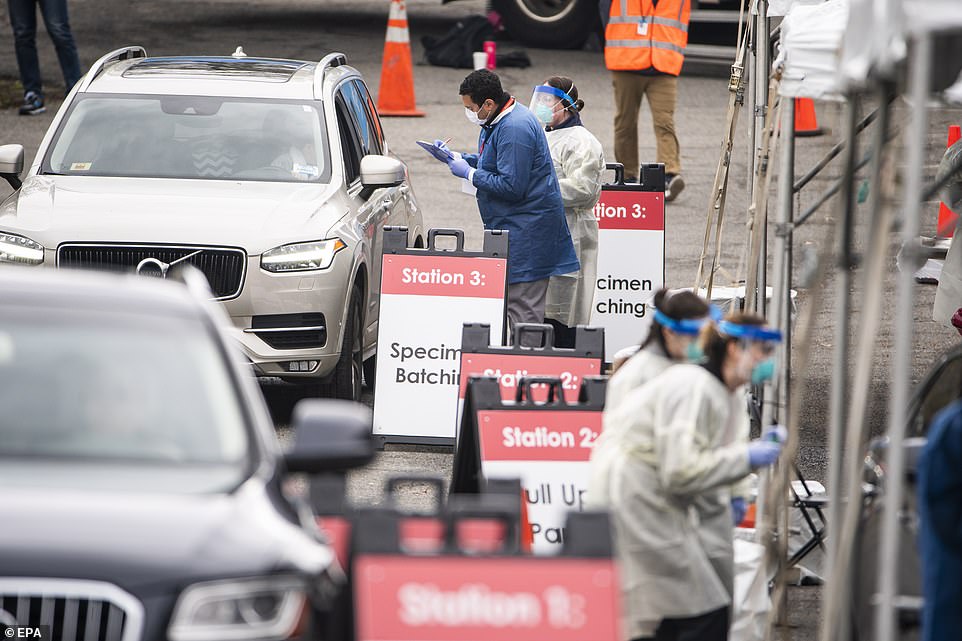 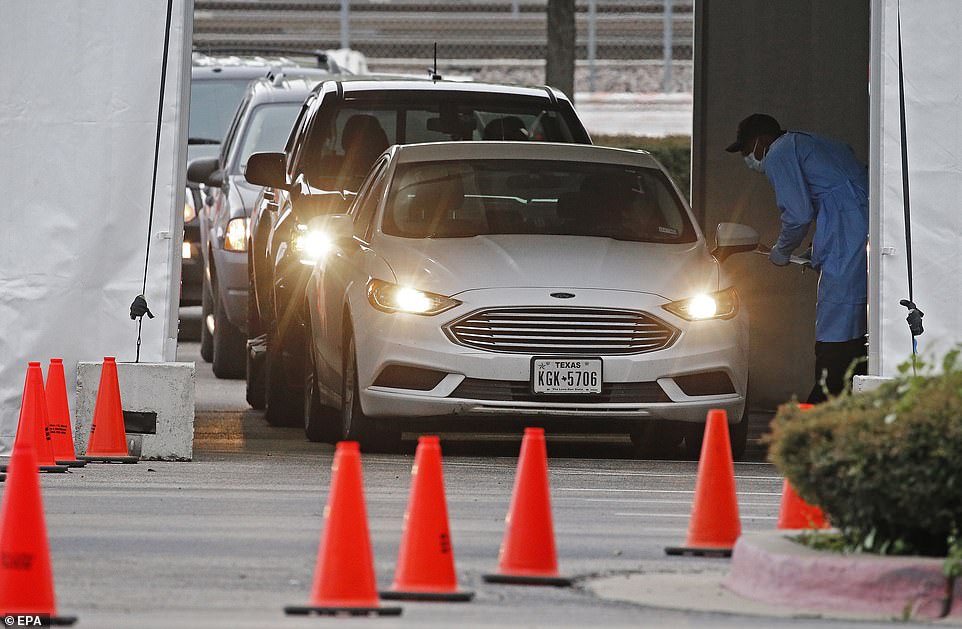 Workers test residents in a drive through testing site in downtown Dallas, Texas, after Dallas County as well as other multiple counties in Texas are starting a mandatory shelter in place

For most people, the new coronavirus causes only mild or moderate symptoms, such as fever and cough. For some, especially older adults and people with existing health problems, it can cause more severe illness, including pneumonia.

The vast majority of people recover from the new virus. According to the World Health Organization, people with mild illness recover in about two weeks, while those with more severe illness may take three weeks to six weeks to recover.

In Utah, the health department said it isn’t in charge of the sites and isn’t tracking them.

North Carolina’s health director said the state is leaving testing to the private sector and declined to say how many sites there are.

By contrast, in Rhode Island, health care organizations are running the sites in partnership with the state health department.

In Houston, cars lined up for more than a mile outside a hospital when the city’s first drive-thru testing site opened. US Rep Sheila Jackson Lee said they administered fewer than 200 tests in the first six hours.

Dozens of people waiting in cars at a center in Homestead, Florida, on Wednesday, waited their turn to speak with a screener wearing a gown and mask and carrying a clipboard. Some were apparently turned away. Others were waved through, had their temperatures checked and were swabbed for samples. 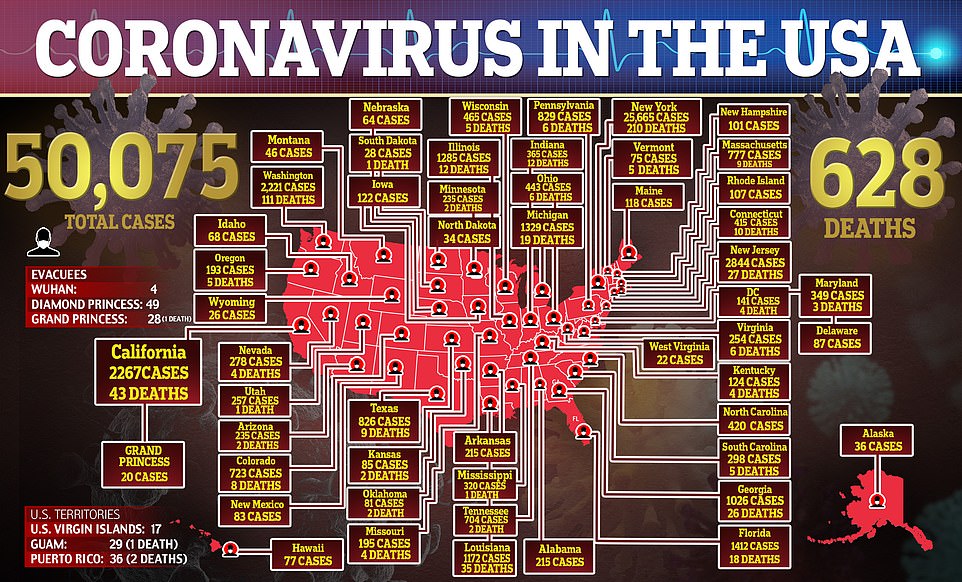 There are more than 50,000 confirmed cases of coronavirus in the United States with 628 deaths 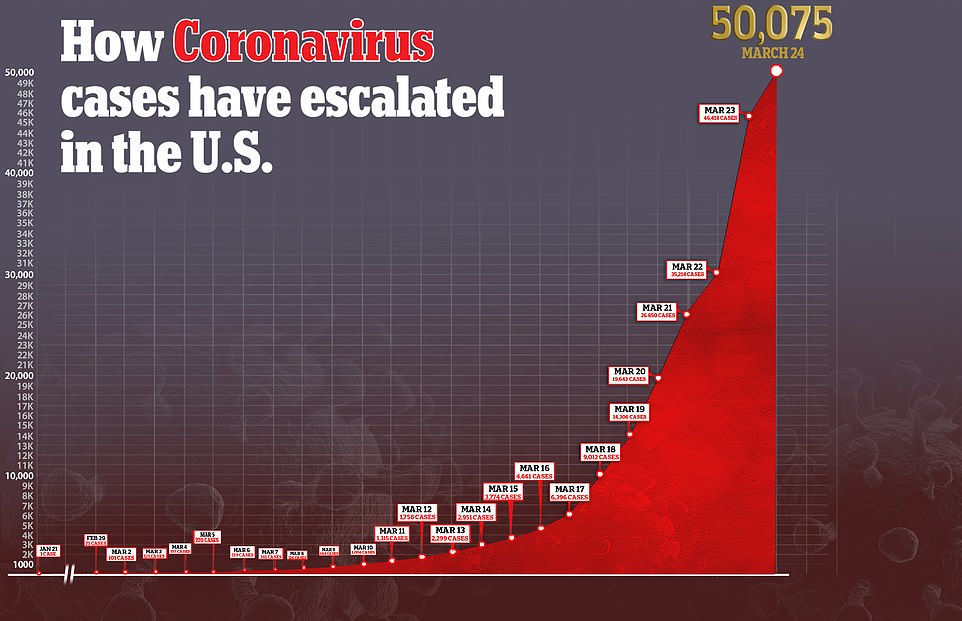 But supply shortages have shut down drive-thrus in several states, including Colorado, New Mexico, Virginia, Florida, Louisiana, Alabama, North Carolina, and Utah. One Las Vegas site was closed because it didn’t have enough workers.

New York state opened several centers to great fanfare on Tuesday. By Friday, however, New York City’s health department issued an alert saying only people who require hospitalization should be tested, due to shortages of protective equipment such as face masks.

Drive-thru sites in New York state remain open, but only to people who meet certain criteria.

The 20 sites in greater Philadelphia are testing about 1,000 people a day, but that hasn’t cleared the pent-up demand.

Nevada Gov Steve Sisolak said he has begged the federal government for additional test kits and supplies, but the state received a notice Thursday that all of its requests for drive-thru testing pods and testing kits ‘are on an indefinite backlog, without any estimate of a timeline for delivery.’

‘This is our unfortunate reality Nevada. It’s up to us,’ he said.

The sites themselves are dotted with tents and traffic cones. The most notable features are medical personnel wearing masks, gloves and protective smocks or other clothing.

They take nose and throat swabs from people sitting in their cars or help people go inside for the test. 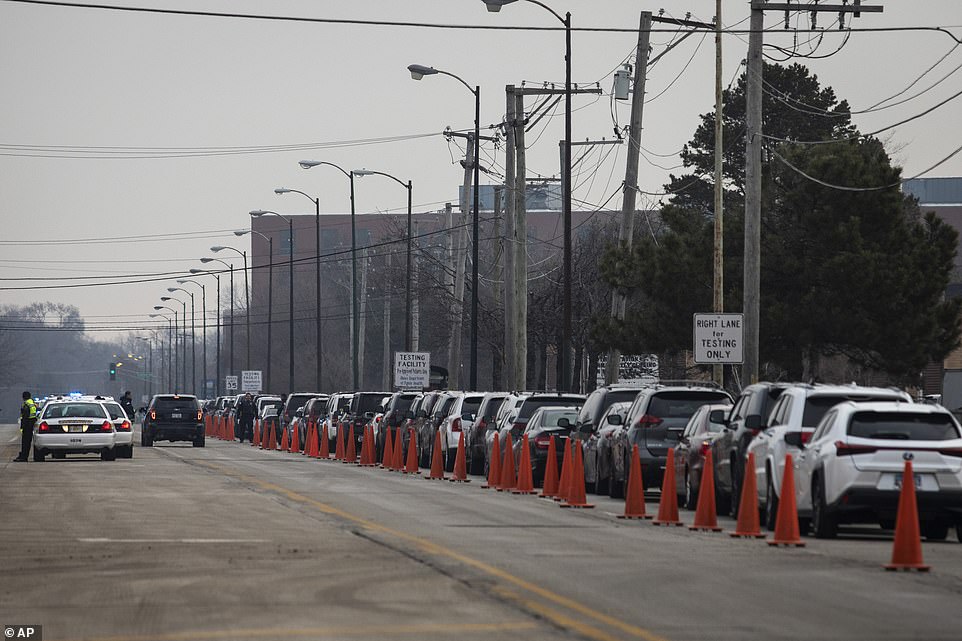 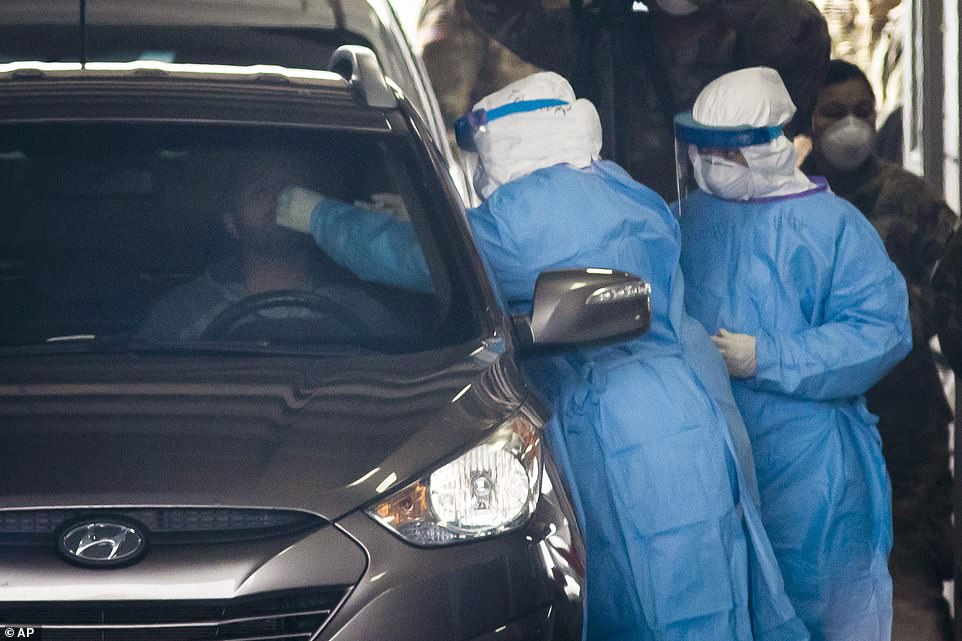 The Illinois National Guard operates a COVID-19 drive-thru test site for medical personnel and first responders on Tuesday in Chicago. Mayor Lori Lightfoot says the city plans to reserve thousands of hotel rooms for people with mild cases of the coronavirus and others unable to return to their homes while awaiting test results 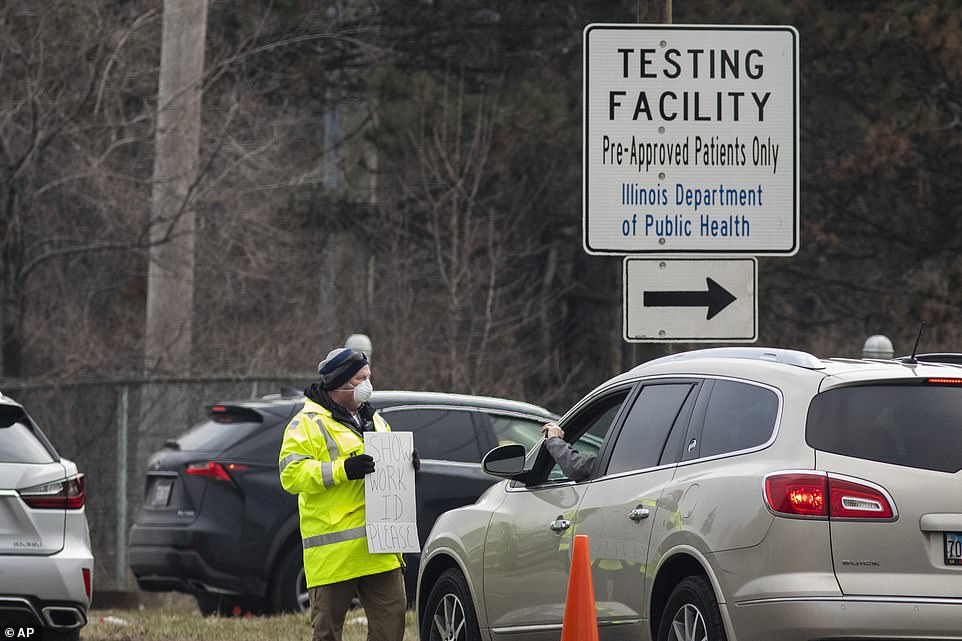 Some states have as few as one drive-thru site. Montana’s sole site is in Billings, the state’s largest city. Others have a few dozen.

In Rhode Island, the National Guard have been on hand to set up the state’s three drive-thru sites and even to swab patients. State officials said they are testing around 100 to 200 people a day at all testing sites, including three drive-thrus.

Gov Gina Raimondo said they want to perform 500 to 600 per day, but they don’t have the supplies they need.

6’It is our absolute top priority to get to a place where everyone who needs it can be tested and you’ll get the results very quickly,’ Raimondo said at a news conference held via Facebook Live on Friday.

‘Then if you’re positive, we can get you quarantined.’

The vast network of drive-thru sites at retail chains that Trump said more than a week ago was coming has so far failed to materialize.

CVS has opened one site in Massachusetts, which it calls a ‘model for testing’. Walmart launched two sites Sunday, and Walgreens said it’s launching one, all three in Illinois.

Only health care workers and first responders are allowed, and Walmart said a maximum 150 tests per day could be performed at its federal sites.

Fury as bins are now overflowing with OUT-OF-DATE food after being...