Boris Johnson is under growing pressure to stop non-essential construction workers heading to building sites as Britain attempts to tackle the spread of coronavirus.

The Prime Minister has faced calls across the political spectrum for more stringent rules so workers are not placed at risk, and public transport is not overwhelmed.

Mr Johnson, who will appear before MPs today for Prime Minister’s Questions in the Commons, has so far resisted the pressure.

Meanwhile, it has emerged that plumbers, electricians and other tradesmen are still allowed to carry out routine work in people’s homes despite the dramatic lockdown announced on Monday.

Construction workers on a building in Canary Wharf, London, amid the coronaavirus pandemic. Nelson, a self-employed electrician who works in East London, decided not to go into work this morning over fears of spreading the virus 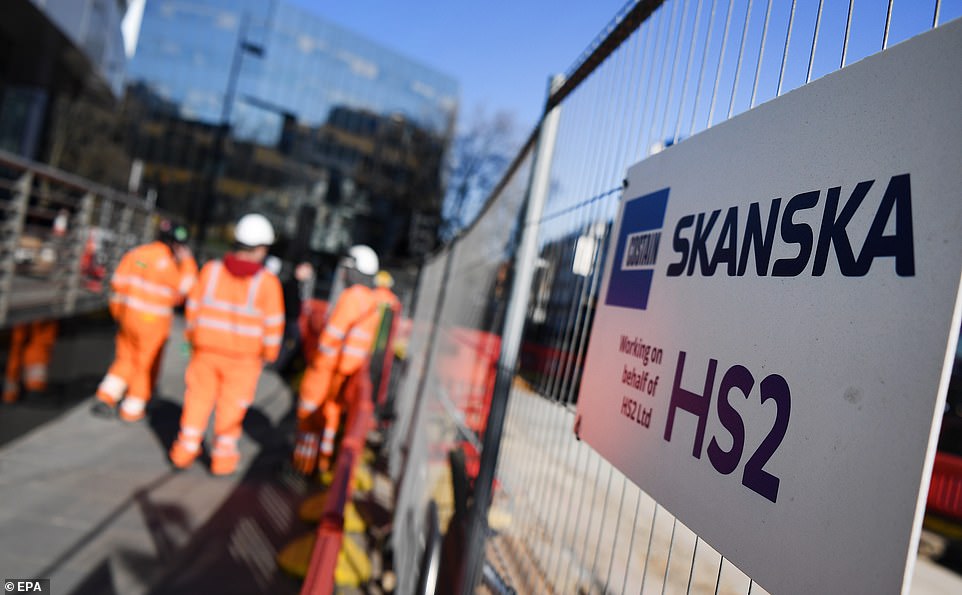 Construction workers standing in a circle while working on a HS2 site in London this morning. Prime Minister Boris Johnson has announced people can only leave their homes for essential reasons or may be fined, to reduce the spread of coronavirus 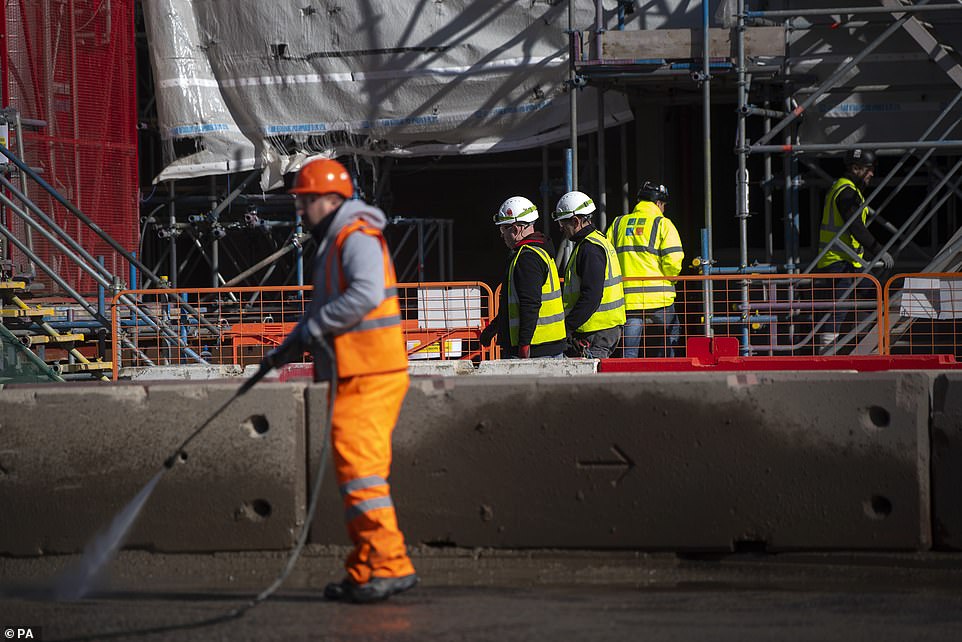 Workers on a construction site in Canary Wharf, London. It follows the government launching a recruitment drive for 250,000 NHS volunteers in good health to help vulnerable people, with Matt Hancock announcing an exhibition centre in London will be converted into a new NHS hospital 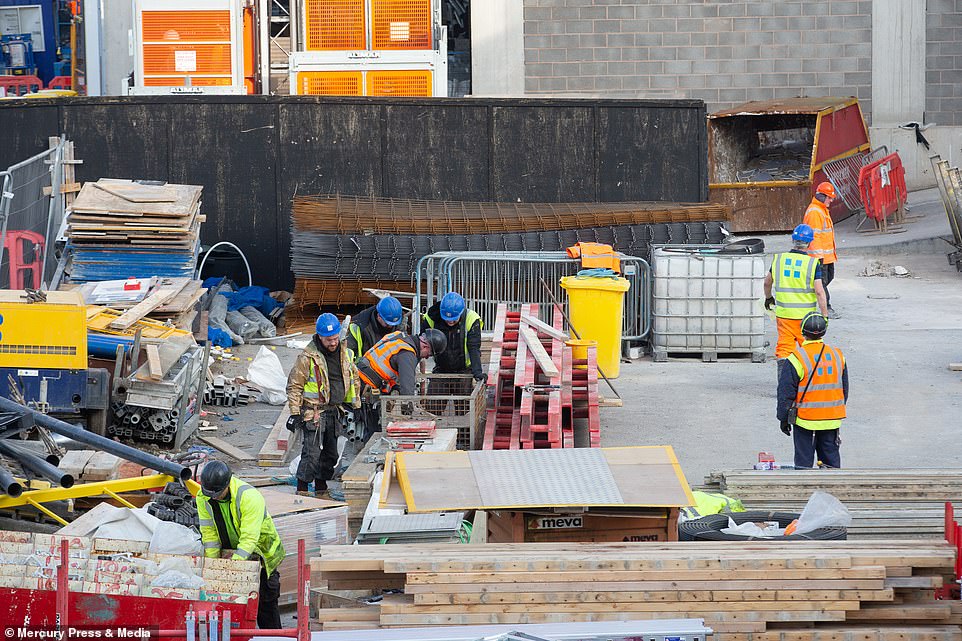 Nelson, a self-employed electrician who works in East London, decided not to go into work this morning over fears of spreading the virus.

He told BBC’s Today Programme: ‘People know of people who are now in hospital and they’ve called it on site, there seems to be a lot of continued lack of distancing taking place, and obviously the cross-contamination is rife because they’re still going to the canteens, they’re still logging in the mornings with their finger on the keypads.

‘I’m at a bit of a loss of words to be honest and I’m not one who often is at a loss for words. But I’m really not sure where to go from here.

‘Everyone’s position or situation is unique to them. I’ve been having online, and on Whatsapp, ongoing arguments all day today as to why I was on site up until now. And personally, like I said, I need to be earning money, otherwise within a month I’m going to feel the pinch.’

Earlier in the programme, Communities Secretary Robert Jenrick urged employers to be ‘sensible’ in their decisions to keep building sites open.

Radio presenter Nick Robinson asked: ‘We take construction workers for example – construction is being stopped in Scotland, the Mayor of London says it should be stopped.

‘We’re seeing photographs, we’re hearing messages from people on building sites up and down the land saying “it’s preposterous to claim I can be two metres away, and even if I can be I’m often holding the same bit of scaffolding or bit of kit without having gloves, without having an ability to wash my hands afterwards, it’s just not happening.”‘

Mr Jenrick replied: ‘Well it depends, there are situations where it is safe to continue to go to work, and the medical advice says that. Public Health England have published further guidance as to how you can operate site, in certain settings, safely. 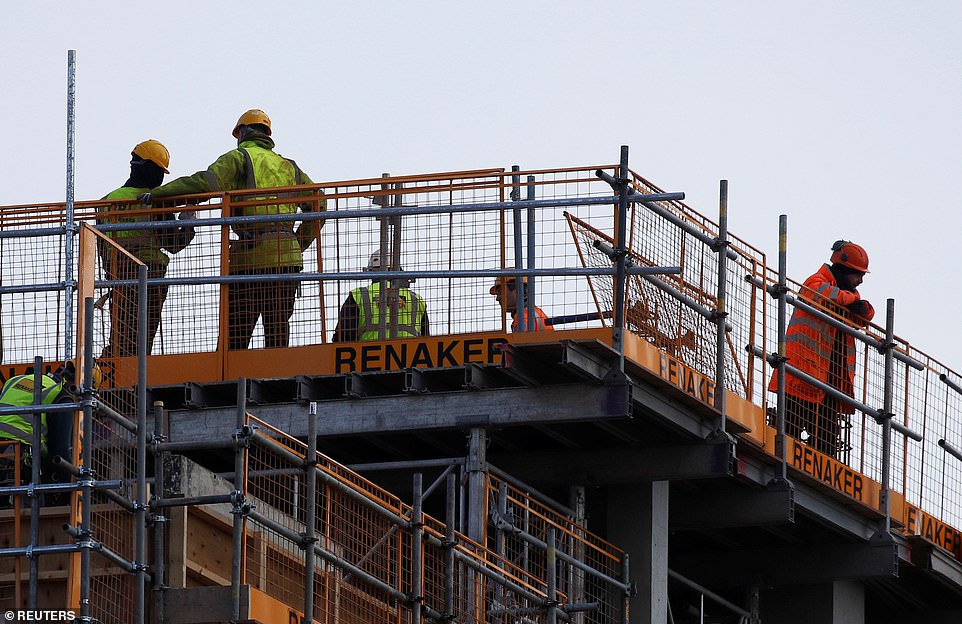 Construction workers pictured working on a building in Manchester today, as the country continues to attempt to tackle the spread of coronavirus. Communities Secretary Robert Jenrick has urged employers to be ‘sensible’ in their decisions to keep building sites open and ‘take account’ of advice from Public Health England 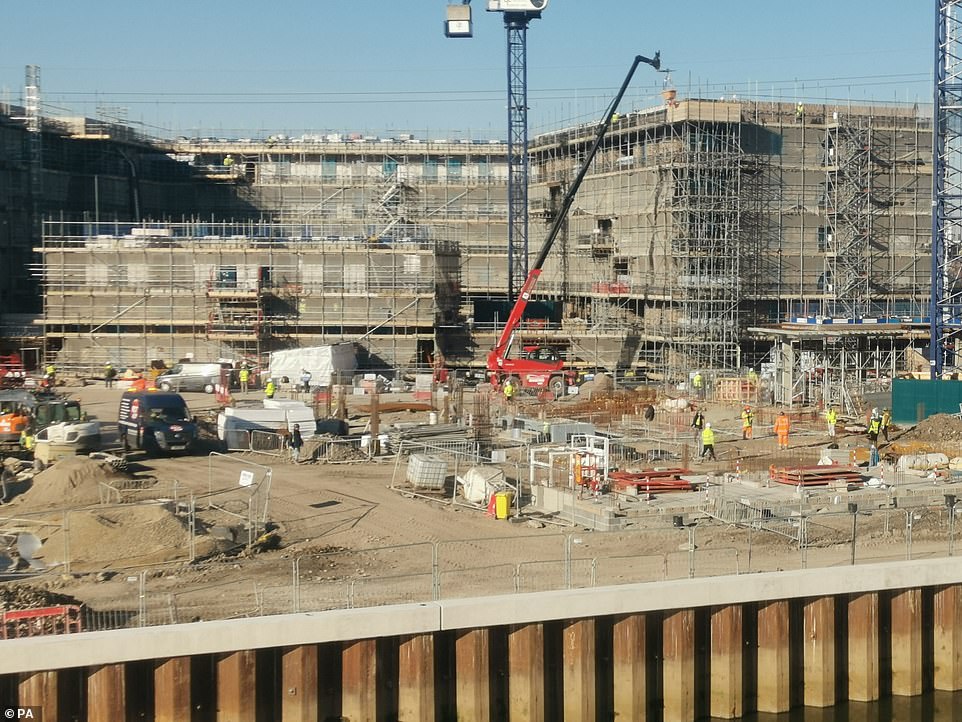 Construction workers on a site in Barking, East London, after the government has faced calls to ‘take the difficult decision’ and ban non-essential construction work. Mayor of London Sadiq Khan has urged the government to act urgently and encourage more people to stay at home, following images of packed tube carriages during workers’ commutes 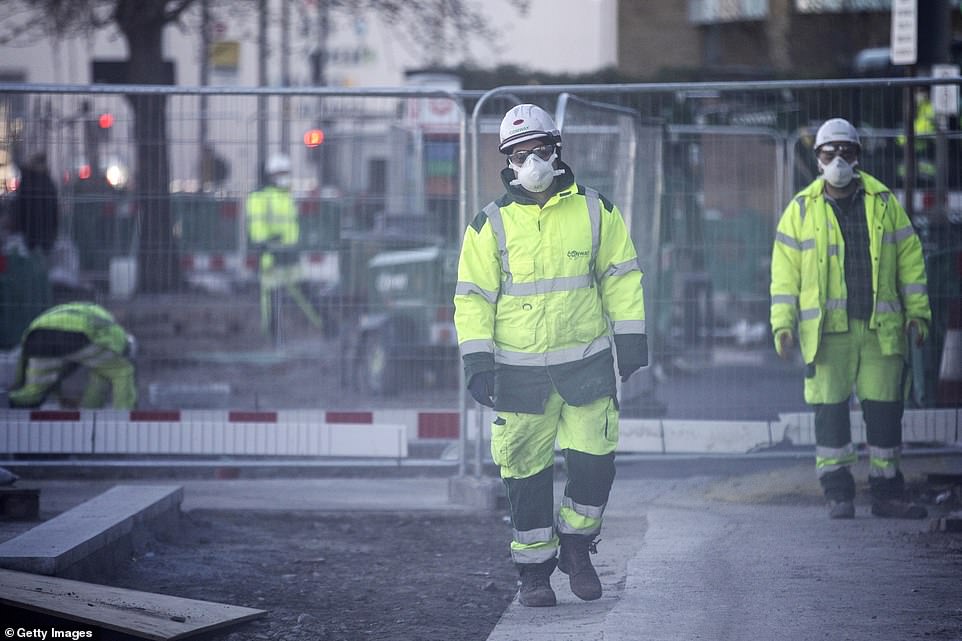 Construction workers wear face masks as they work on Battersea Park Road, near Battersea Power Station in Wandsworth, south-west London. Works on the Battersea Power station site have temporarily stopped, as of yesteday. It follows the Prime Minister urging people to stay at home 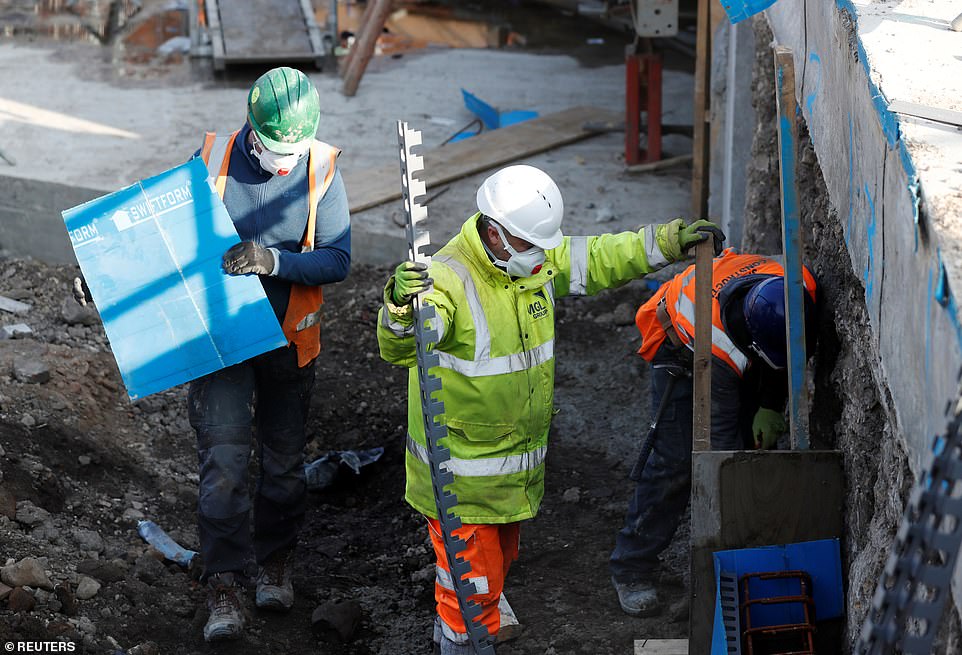 Construction workers work on a site in Chester-le-Street, a village in County Durham, as the spread of coronavirus continues. Michael Gove, the minister for the cabinet office, confirmed plumbers could continue to carry out emergency repair jobs so long as they observed the six-feet distancing policy

‘There are precautions that you would need to take, some of which will prove too difficult for some site operators to adhere to. That’s why you have seen a number of companies choosing to close down their sites in the last day or two, and I fully support those decisions.

‘Employers need to be sensible, need to take account of Public Health England guidance and make decisions in the best interests of their workers and of wider society, as they would have to with any other health and safety situation.’

Responding to claims that details of the lockdown were ‘murky’, Michael Gove, the minister for the cabinet office, recently said: ‘It is the case that construction should continue on sites.

‘People should obviously exercise sensitivity and common sense and follow social distancing measures. But construction sites carried out in the open air can continue’.

He also confirmed that plumbers could continue to carry out emergency repair jobs so long as they observed the six-feet distancing policy.

Updated guidance from the government today states: ‘Work carried out in people’s homes, for example by tradespeople carrying out repairs and maintenance, can continue, provided that the tradesperson is well and has no symptoms.

‘Again, it will be important to ensure that Public Health England guidelines, including maintaining a 2 metre distance from any household occupants, are followed to ensure everyone’s safety.’

The guidance says work should not be carried out in a household that is isolating or where an individual is being shielded, unless there is a problem that puts them at risk.’

Speaking at a press conference on Monday, Ms Sturgeon, the Scottish First Minister, said of building sites: ‘My advice would be to close.’

The Mayor of London echoed these sentiments and said: ‘I’ve been concerned about the mixed messages and the lack of clarity.’

He added: ‘The only people that should be leaving home are those that are essential to look after us.

‘In my view the only construction workers that should be working are those that are needed for safety.’ 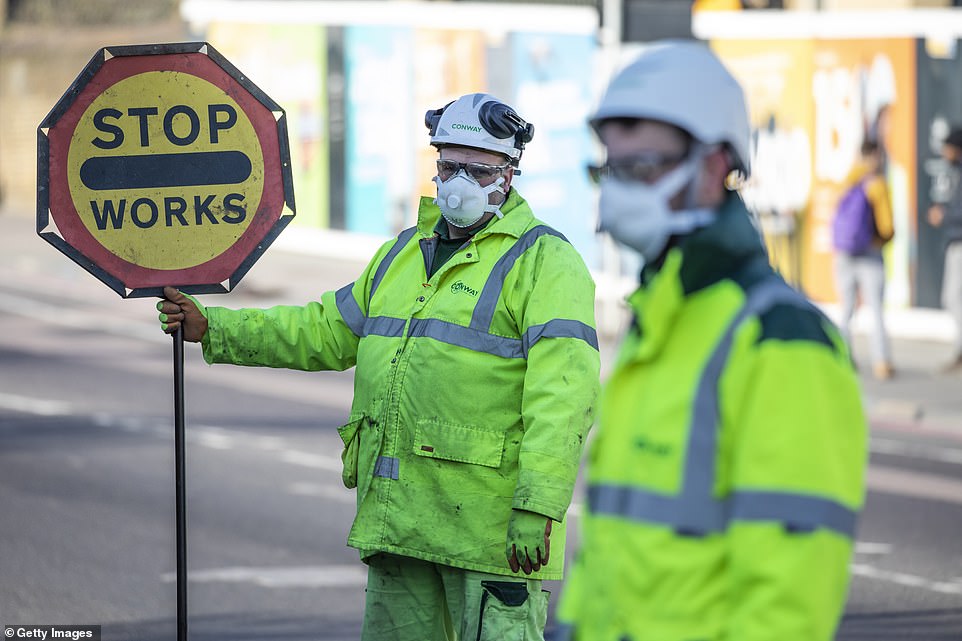 Two construction workers wear face masks and maintain social distancing as they continue work on Battersea Park Road, with one holding up a sign that reads: ‘Stop works’. It comes as Boris Johnson faces calls across the political spectrum for more stringent rules so construction workers are not at risk and public transport is not overwhelmed 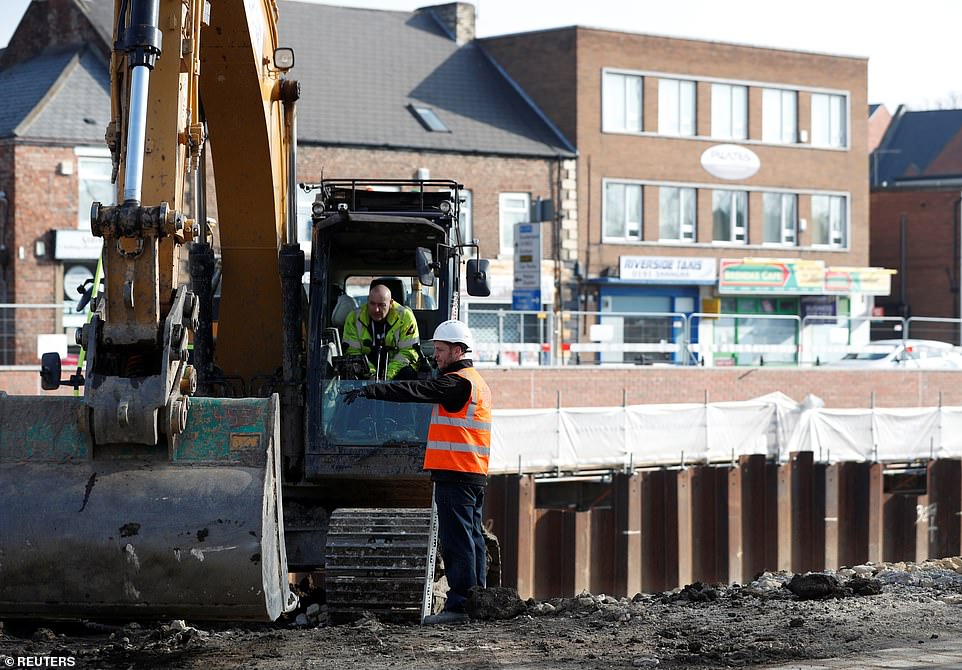 Two construction workers at a site on Chester-le-Street, with one operating a digger. The Communities Secretary said this morning that employers need to ‘make decisions in the best interests of their workers and of wider society, as they would with any other health and safety situation’ 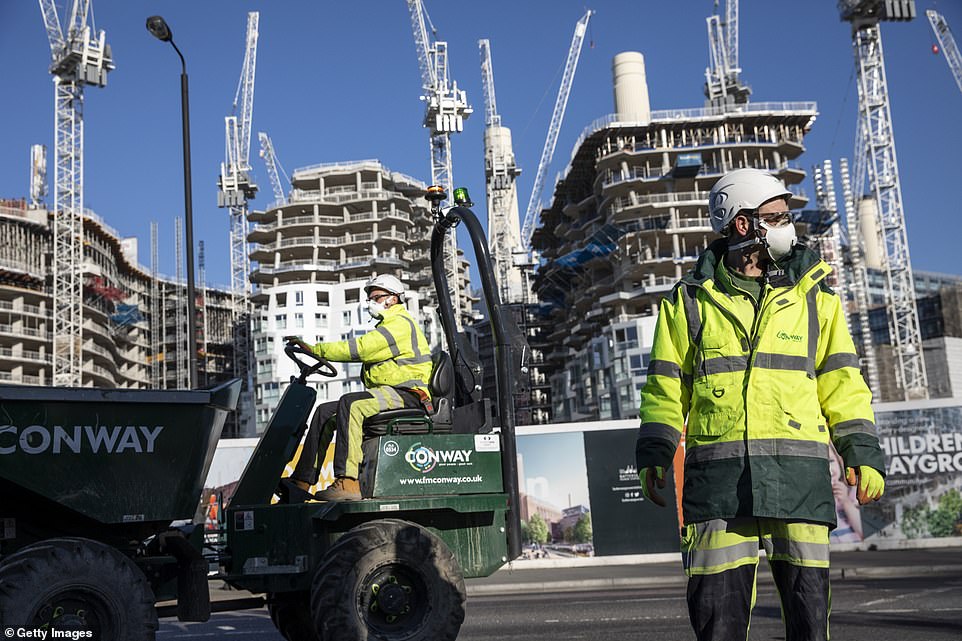 Workers wearing masks and social distancing on Battersea Park Road in London. Responding to claims that details of the lockdown were ‘murky’, Mr Gove said: ‘It is the case that construction should continue on sites’ 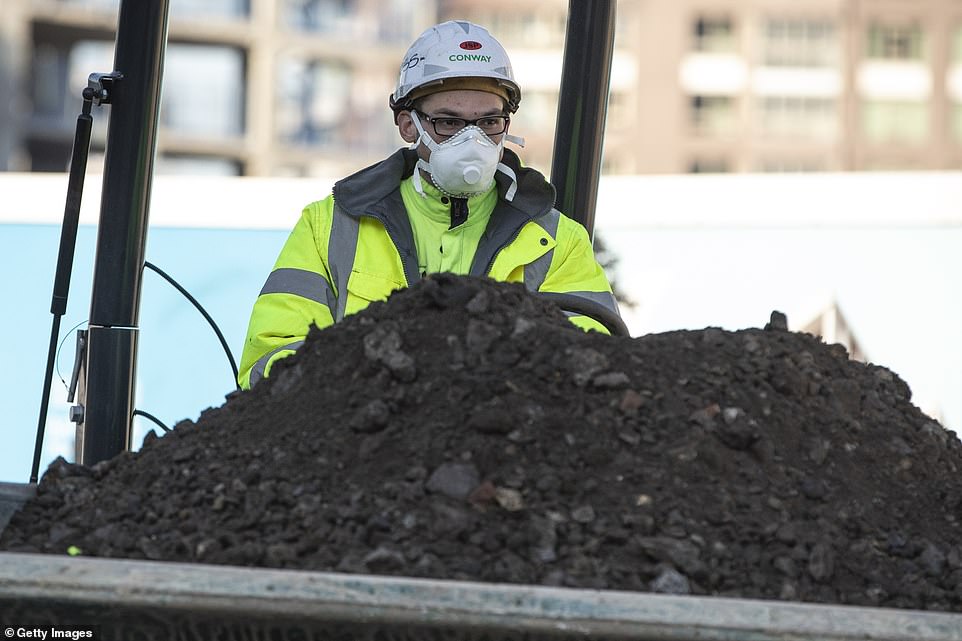 A construction worker wears a face mask while continuing work on Battersea Park Road. The government is under intense pressure to set out a financial support package for self-employed workers – measures senior Conservative MP Sir Iain Duncan Smith said were soon to be announced 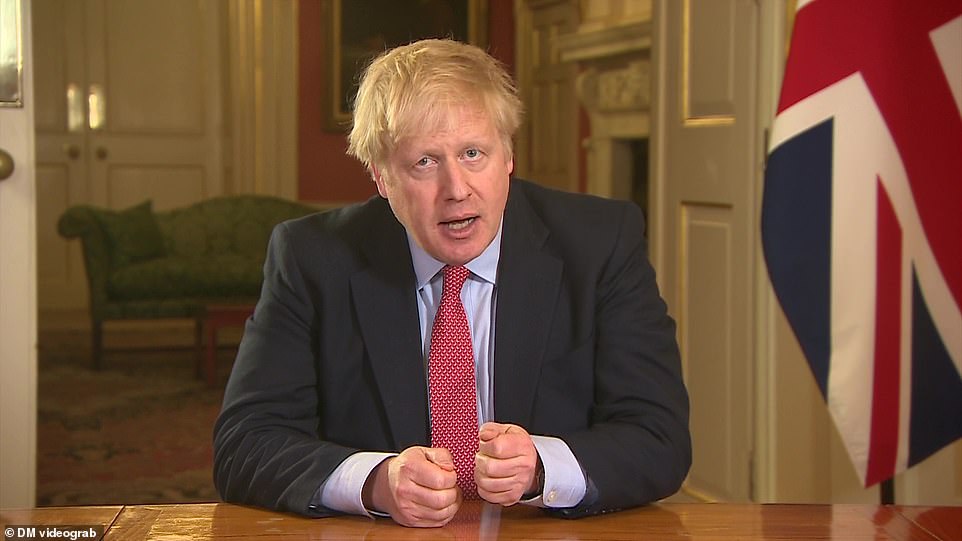 Prime Minister Boris Johnson pictured addressing the nation in the White Room at No 10 Downing Street on Monday, during the coronavirus pandemic. He is under growing pressure to stop non-essential construction workers heading to building sites and will appear before MPs for Prime Minister’s Questions in the Commons today

It follows the government launching a recruitment drive for 250,000 NHS volunteers in good health to help vulnerable people, with Matt Hancock announcing an exhibition centre in London will be converted into a new NHS hospital.

The Health Secretary said people are needed to assist with the national effort to tackle coronavirus by shopping, delivering medicines and supporting those who are shielding themselves against Covid-19.

And he confirmed that a temporary hospital – the NHS Nightingale hospital – would be opening at London’s ExCeL centre, with 4,000 beds spread across two wards.

On Tuesday, it was revealed that the number of coronavirus dead in the UK had reached 422 – up from 335 the day before and the largest day-on-day increase in the number of deaths since the outbreak began. Northern Ireland later said there had been a further two deaths in the region.

In measures announced on Monday, the Prime Minister told people to only go to work if ‘absolutely necessary’.

But on Tuesday, Mr Hancock said those who cannot work from home, including key workers in the NHS and social care, should go to work ‘to keep the country running’.

The Health Secretary said construction workers were among those who could continue to work as long as they could remain two metres apart at all times.

But some builders and construction workers have said they feel ‘angry and unprotected’ going to work, while others are under pressure from employers to go in.

Mr Duncan Smith added his voice to the calls, telling BBC Two’s Newsnight: ‘So this is the critical question, they need to define exactly what in terms of the construction workers that need to go to work.

‘Let me give you an example, there are such things as emergency construction jobs that need to be done, these people will be, as termed, key workers, because they will be doing something that meant something or stopped something going wrong. Those are critical.

‘The question is general construction and to what degree is it needed, the economy is part of the whole issue, we’ve got to keep this running, but there is a balance.

‘If you ask me for my view on this it is the balance is now where we should delete some of those construction workers from going to work and focus only on the emergency requirements.’

Andy Burnham, Mayor of Greater Manchester, told the programme: ‘This decision about allowing non-essential work appears to be taken for economic reasons when actually – when you’re in the middle of a global pandemic – health reasons alone really should be guiding all decision making.’

His comments came after Mr Hancock said that the London Underground should be running in full so that people are spaced out and can be further apart.

The government is also under intense pressure to set out a financial support package for self-employed workers – measures senior Conservative MP Sir Iain said were soon to be announced.

‘I believe the government has reached a conclusion about that, the best way to do it is to look back over the average for the year but that does leave out some who haven’t been self-employed for over a year,’ he told Newsnight.

Elsewhere, Mr Hancock said 11,788 recently retired NHS staff had responded to the call to return to the service, including 2,660 doctors, more than 2,500 pharmacists and other staff and 6,147 nurses.

‘I pay tribute to each and every one of those who is returning to the NHS at its hour of need,’ Mr Hancock said.

Some 5,500 final-year medics and 18,700 final-year student nurses will also ‘move to the front line’ next week.