Woman was in her 20s and worked as nurse at King’s College intensive care unitShe was found unresponsive at south London hospital at 5.30pm on MondayKCH has had eight people die from coronavirus with UK death toll at 422 Coronavirus symptoms: what are they and should you see a doctor?

By Lara Keay For Mailonline

A young nurse at a London hospital where coronavirus patients are being treated killed herself at work, it was claimed today.

The woman was in her twenties and is believed to have worked on an intensive care ward at King College Hospital in south London.

She was found unresponsive at the hospital before police were called at 5.36pm on Monday, officers said.

Medics battled to save her but she later died. Her next of kin have been informed, the Mirror reports.

Those on life support or in need of critical care are treated at the hospital’s intensive care unit (ICU), where the woman is believed to have worked.

A nurse in her twenties at King’s College Hospital in Denmark Hill, south London, is believed to have taken her own life. File image used

A Met Police spokesman said: ‘Police were called at 17:36hrs on Monday, 23 March to a south London hospital after a woman was found unresponsive. Officers attended.

‘The woman, aged in her 20s, was treated and later died in hospital. Next of kin have been informed.

‘The death is not being treated as suspicious. A file will be prepared for the coroner.’

A King’s College Hospital spokesman added: ‘A member of staff was found unresponsive at the hospital on Monday (23 March 2020).

Despite the best efforts of the medical team, they sadly died. We are offering support to their family at this difficult time and would ask that their privacy is respected. ‘

London has seen more coronavirus cases than anywhere else in the country, with 2,872 of 8,077 reported in the capital.

There have been a total of 143 deaths in the city, with health bosses fearing the toll could double daily.

Last week nearby NHS trust London North West University Healthcare declared an emergency when it warned it was running out of intensive care beds. 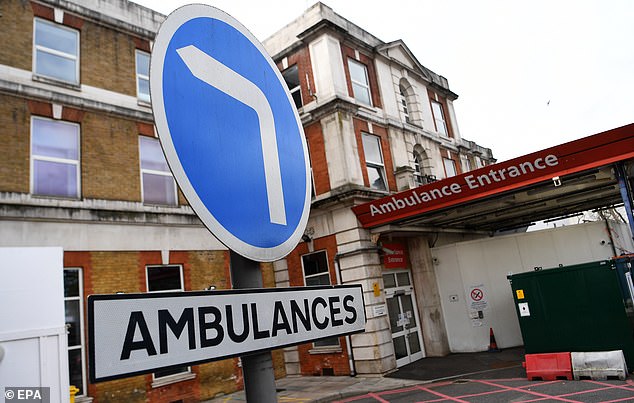 Army officials have visited the ExCeL Centre in the Docklands, which they are considering turning into a ‘field hospital’.

The 68,750-capacity conference centre could accommodate 4,000 hospital beds, with military planners also believed to be eyeing up the O2 Arena and Wembley Stadium in a desperate bid to treat more patients.

Yesterday Health Secretary Matt Hancock called for 250,000 people to volunteer their services to bolster the NHS.

Doctors and nurses across Britain claim Public Health England (PHE) is risking their lives by not giving them full hazmat suits to treat coronavirus patients, in line with World Health Organisation (WHO) guidelines.

Elsewhere a University of Oxford study has claimed more than half of the UK population may have already been infected, which could mean Britain could achieve ‘herd immunity’.

For confidential support with any issues raised in this story, you can call the Samartians 24/7 on 116 123 or email [email protected]