By Michael Thomsen For Dailymail.com

Researchers from the University of Washington have found that emissions from container ships and other commercial vessels form dense clouds that reflect solar radiation and significantly mask the effects of global warming.

Exhaust from commercial ships contain small sulfate particles, which the researchers describe as ‘seeds,’ that attract water vapor and then turn into cloud droplets.

Because of their small size, these sulfate particles lead to clouds that are more densely packed with droplets and have greater surface area that reflects solar radiation before it reaches the ocean.

The team estimated that these emission-based clouds may have had a masking effect on global warming by decreasing the amount of solar radiation that ends up trapped in the atmosphere by other greenhouse gases.

These denser clouds blocked an average of two watts of solar energy for every 11 square feet (one square meter) of open ocean.

‘But because there’s so much natural variability it’s been hard to see this effect in observations of the real world.’

To measure the effect, the team looked at data from two different sets of satellites, one which analyzed the composition of the air using spectroradiometers and another which measured the amount of sunlight reflected from the atmosphere.

The data was taken from over one of the most heavily trafficked shipping routes in the Atlantic Ocean between 2003 and 2015. 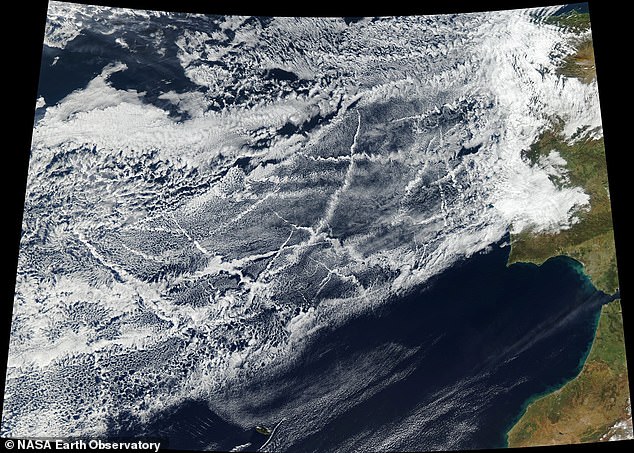 Exhaust from commercial ships contain tiny sulfate particles, which attracts water vapor and causes small cloud droplets to form. The droplets formed around these particles are smaller than normal droplets and have greater surface area used to reflect solar energy 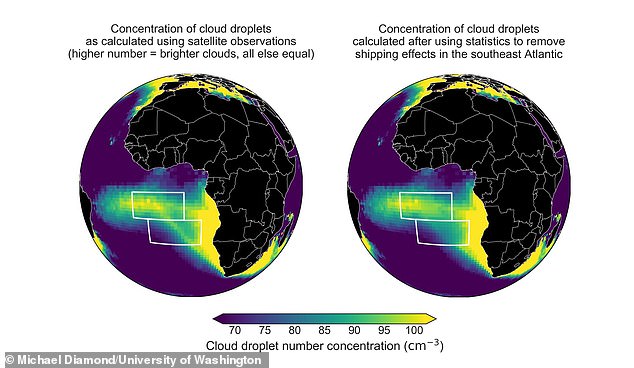 Some have suggested trying to make more chemically-based clouds to reflect sunlight in the hopes of mitigating global warming, potentially using small salt particles as ‘seeds.’

According to Diamond, there’s still not clear enough evidence to say that would be a good idea.

‘What this study doesn’t tell us at all is: Is marine cloud brightening a good idea? Should we do it?’ Diamond said.

‘There’s a lot more research that needs to go into that, including from the social sciences and humanities,’