The figure is now higher than the 3,285 people who have died in mainland China, where the outbreak began in late 2019. 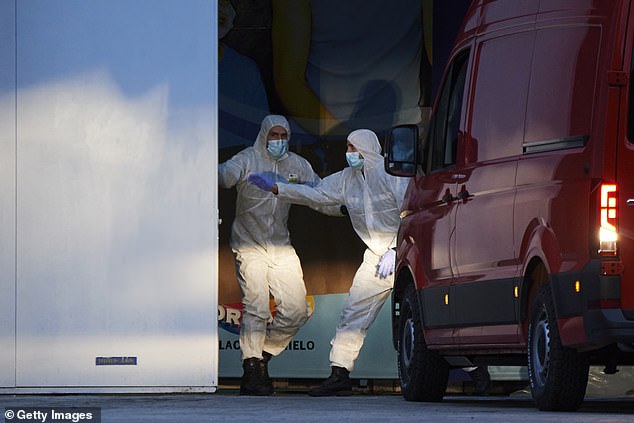 Despite an unprecedented lockdown imposed on March 14, both deaths and infections have continued to mount, with the Spanish army called in to join efforts to curb its spread.

‘We are approaching the peak,’ the health ministry’s emergencies coordinator Fernando Simon said in announcing the figures.

Health authorities are hoping it will soon become clear whether the lockdown is having the desired effect.

‘This is a very hard week because we’re in the first stages of overcoming the virus, a phase in which we are approaching the peak of the epidemic,’ health minister Salvador Illa told a televised news conference.

Spain only recorded its first virus death on March 3, but within three weeks the death toll has surged far more quickly than it did in Italy or China.

China had 99 per cent of global infections as recently as February 13, but Spain’s higher death toll underlines how Europe has become the epicentre of the pandemic.

Like many other countries, Spain has been struggling with a lack of medical supplies for testing, treatment and the protection of frontline workers.

NATO said Spain’s military had asked for ‘international assistance’, seeking medical supplies to help curb the spread of the virus both in the military and in the civilian population. 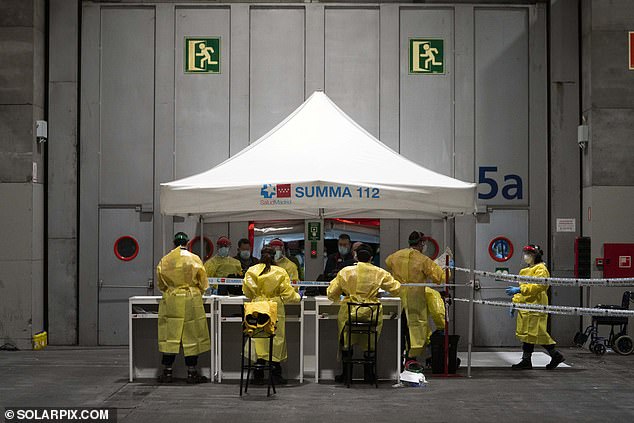 Health workers in yellow protective suits work at a field hospital in Madrid’s IFEMA convention centre, where coronavirus patients will be treated 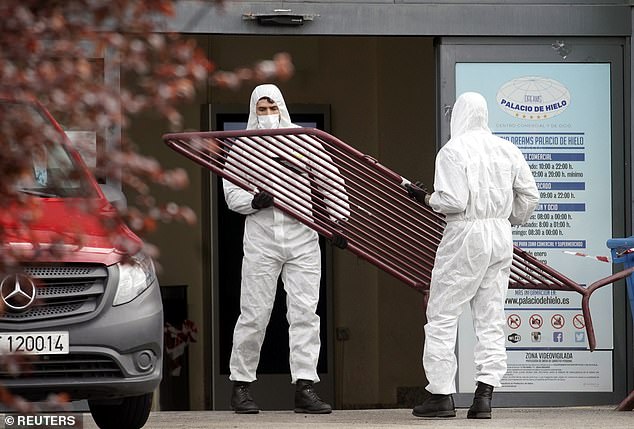 Members of the Spanish army carry a fence inside an ice rink which will be used as a morgue in Madrid, as the death toll continues to surge

With the numbers still spiralling, the government yesterday Tuesday sought parliamentary approval to extend the state of emergency for an extra two weeks, until April 11 – the day before Easter – in a bid to slow the spread of the virus.

‘We are aware of just how hard it is to prolong this situation, but it is absolutely imperative that we keep fighting the virus in order to win this battle,’ government spokeswoman Maria Jesus Montero told the news conference.

Spain, she said, was in ‘the decisive phase in responding to the crisis, a crisis which was testing Spanish society in the most unimaginable way’.

‘These are infinitely difficult days,’ she acknowledged.

The surge in numbers has brought the medical system to the brink of collapse, with some 5,400 healthcare workers testing positive for the virus, or around 12 percent of the total.

Speaking to TVE public television, the Madrid region’s top health official, Enrique Ruiz Escudero, said the crisis was ‘unprecedented in the history of Spain’s national health service’, suggesting it was likely that the lockdown would extend beyond Easter.

‘I think we are going to have to extend (the lockdown) until after Holy Week, that these (restrictive) measures will have to continue beyond that,’ he said.

With the city’s funeral services overwhelmed, Madrid officials have commandeered the Palacio de Hielo ice skating rink to serve as a temporary morgue. 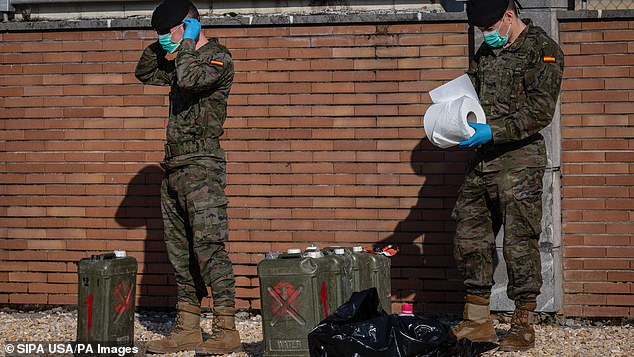 ‘We don’t have the logistical capacity to carry out all the burials and cremations at the rate at which people are dying,’ Madrid’s mayor Jose Luis Martinez-Almeida told TVE public television.

The Spanish capital has also transformed part of a giant exhibition centre into a field hospital with 1,500 beds which could be expanded take in up to 5,500 patients.

EU leaders today voiced their solidarity with Spain, as Europe became home to the two deadliest outbreaks in the world.

‘I want you to know that we are working tirelessly to help you – you are not alone,’ said European Commission chief Ursula von der Leyen.

The Commission has launched a joint purchase of medical supplies, especially face masks, on behalf of 25 member states, but demand far outstrips supply.

Nevertheless, von der Leyen promised that masks, gloves and protective gowns would be sent to Spanish hospitals within two weeks.

Charles Michel, the head of the European Council, said in a public letter to Spain that ‘Europe stands by your side in full solidarity, and we will spare no effort to help you’.

‘On a personal level, it pains me to see Spain – a country I admire for so many reasons – suffer under the terrible weight of this relentless virus,’ he said.

‘Doctors, nurses and health professionals in Spain are teaching us all a lesson of sacrifice, solidarity and generosity.’

European Parliament speaker David Sassoli joined in by tweeting to Spanish citizens that ‘the difficulties and problems you are experiencing are also ours’.