She came under fire for posting to Instagram that it was ‘business as usual’ for her and her family during the coronavirus crisis.

But following days of backlash about her decision not to self-isolate at home, including from her Lost co-star Maggie Grace and Game Of Thrones actress Sophie Turner, Lilly, 40, issued a ‘sincere and heartfelt apology’ for what she had previously said.

She stated that the comments had been insensitive ‘to the very real suffering and fear that has gripped the world through COVID19.’

The actress went on: ‘Grandparents, parents, children, sisters and brothers are dying, the world is rallying to find a way to stop this very real threat, and my ensuing silence has sent a dismissive, arrogant and cryptic message.’

Sorry: Evangeline Lilly (pictured 2019) posted an apology to Instagram after she came under fire for saying it was ‘business as usual’ for her and her family during the coronavirus crisis 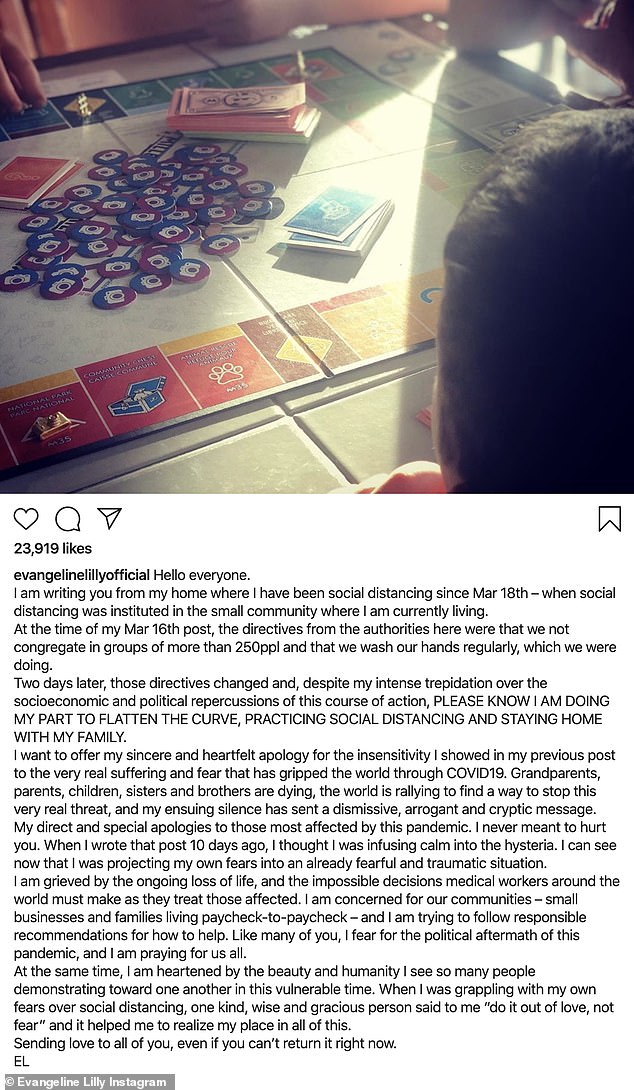 Lockdown: She shared a message Thursday along with a photo showing her playing a board game with her kids and said she was self-isolating at home in accordance with the guidelines

Lilly, who found fame on ABC’s TV series Lost and stars as Wasp in the Marvel Cinematic Universe, was criticized for sharing a photo of a cup of tea with the caption: ‘Just dropped my kids off at gymnastics camp. They all washed their hands before going in. They are playing and laughing. #businessasusual.’

On Thursday, she explained that when she posted it on March 16, there were not any ‘stay at home’ restrictions in the small community where she lives.

‘Two days later, those directives changed and, despite my intense trepidation over the socioeconomic and political repercussions of this course of action, PLEASE KNOW I AM DOING MY PART TO FLATTEN THE CURVE, PRACTICING SOCIAL DISTANCING AND STAYING HOME WITH MY FAMILY,’ she wrote.

‘When I wrote that post 10 days ago, I thought I was infusing calm into the hysteria. I can see now that I was projecting my own fears into an already fearful and traumatic situation,’ she added.

‘I am grieved by the ongoing loss of life, and the impossible decisions medical workers around the world must make as they treat those affected. I am concerned for our communities – small businesses and families living paycheck-to-paycheck – and I am trying to follow responsible recommendations for how to help. Like many of you, I fear for the political aftermath of this pandemic, and I am praying for us all.’