President Donald Trump on Thursday revealed his administration is working on a new set of guidelines to help the country re-open that would grade every county a high, medium or low risk for coronavirus.

‘My Administration is working to publish new guidelines for state and local policymakers to use in making decisions about maintaining, increasing, or relaxing social distancing and other mitigation measures they have put in place,’ he wrote in a letter to the nation’s governors that was released by the White House.

Trump argued that ‘expanding testing capacities’ would make it easier to help classify hot spot areas for the virus and the data would then be used to classify counties for their risk level.

‘This will incorporate robust surveillance testing, which allows us to monitor the spread of the virus throughout the country. Using these data-driven criteria, we will suggest guidelines categorizing counties as “high-risk, medium-risk, or low-risk,”‘ he wrote. 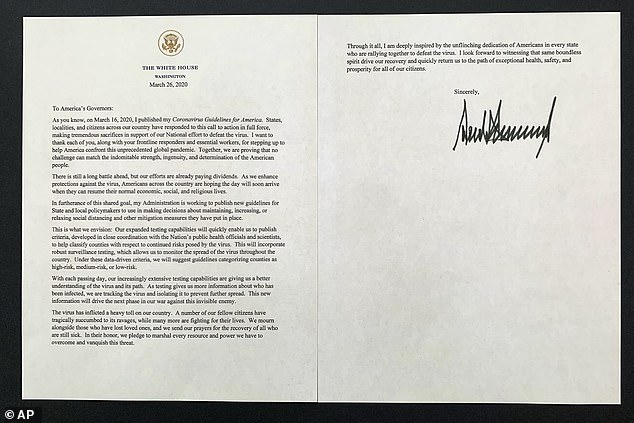 ‘As testing gives us more information about who has been infected, we are tracking the virus and isolating it to prevent further spread. This new information will drive the next phase in our war against this invisible enemy,’ Trump added.

The president held a video teleconference with the governors about the nation’s response to the virus at noon in the Situation Room of the White House Thursday as the number of cases in the United States topped 73,000 and the number of deaths was over 1,000.

Trump has advocated for a return to normalcy as his original 15 day recommendations – which advised no social gatherings over 10 people and eating take out – will expire early next week.

The president suggested Easter as a good time to reopen the nation’s tanking economy although many medical experts have cautioned that April 12 date may be too soon.

Trump back tracked idea a bit on Wednesday and suggested parts of the country could be reopened and hot-spot areas would remain shuttered, which his county by county description would allow him to do.

‘I’m not going to do anything rash or hastily,’ he said at his daily White House briefing on the coronavirus.

He warned some areas of the country that are battling high rates of infection would likely stay under stricter guidelines.

”There’s big sections of our country that are very, you know little affected by what’s taking place, then there are other sections that are very heavily affected. I would say by Easter we’ll have a recommendation,’ he said.

He also said he would consult with Dr. Tony Fauci, the director of the National Institute of Allergy and Infectious Diseases, and Dr. Deborah Birx, who is coordinating the day-to-day response on the coronavirus, on a final decision.

President Trump has been clear he’s worried about the economic affect coming from all the businesses being shuttered because of the pandemic. Numerous states have closed restaurants, gyms, bars, and clubs. The hospitality industry has been hit hard by the pandemic. States like California and New York have advised people to stay home as much as possible.

A decision on the matter is expected early next week, which would mark the end of the ’15 Days to Slow the Spread’ recommendations released last week. 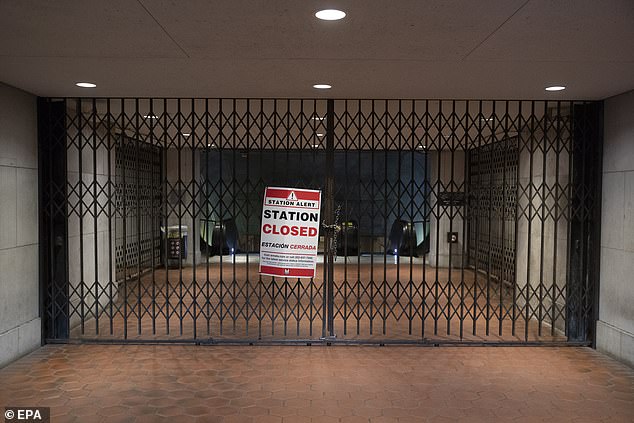 A sign shows the Federal Triangle Metrorail station is closed, in Washington, DC 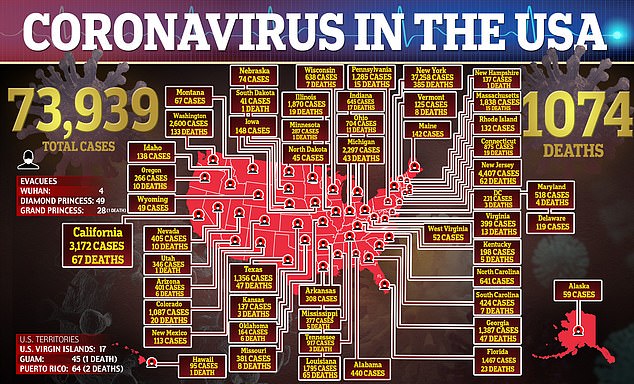 But the president would need the nation’s governors on his side. Several governors have enacted stricter guidelines in their states to stop the spread of the coronavirus.

Virginia, for example, has closed bars, restaurants except for take out, salons, gyms, theaters and other facilities in an effort to end social gatherings of more than 10 people. Those restrictions are in effect until April 23. The state’s schools have been closed for the rest of the academic year.

Trump argued to the governors that people want their lives back.

‘Americans across the country are hoping the day will soon arrive when they can resume their normal economic, social, and religious lives,’ he wrote.

The president’s letter follows a stark warning from Fauci on Wednesday that coronavirus may come back in cycles.

Speaking at the White House daily briefing the director of the National Institute of Allergy and Infectious Diseases said that Americans should be prepared for the outbreak to ‘become seasonal’.

‘Would this possibly become a seasonal, cyclic thing? I think it very well might,’ he said.

He said: ‘And if in fact they have a substantial outbreak, it will be inevitable that we need to be prepared that we’ll get a cycle around the second time.’

Fauci said the possibility of a second cycle ‘totally emphasizes the need to do what we’re doing in developing a vaccine, testing it quickly, and trying to get it ready so that we’ll have a vaccine available for that next cycle’.

He offered optimism, saying he knows ‘we’ll be successful in putting this down now’, adding: ‘But we really need to be prepared for another cycle. And what we’re doing, I believe, will prepare us well.’