They call it ‘Ibiza on ice’ – an Alpine resort famed for its perfectly-groomed pistes where visitors ski all day, and raucous bars where they party all night.

By summer, Ischgl is a small town of around 1,600 residents in the Tyrol region of Austria.

But when the snow comes, it transforms into what the local tourist board calls ‘white winter’s dream’, a haven for schnapps-fuelled adrenaline junkies from across the world.

There are an astonishing one million overnight stays in its quaint wooden hotels and chalets each year. Visitors pack bars and restaurants and crowd into public spaces for outdoor concerts by the likes of Elton John, Robbie Williams and Mariah Carey.

And therein lies a problem.

Ischgl is known as ‘Ibiza on ice’ – an Alpine resort famed for its perfectly-groomed pistes where visitors ski all day, and raucous bars where they party all night

For in today’s climate of fear, Ischgl’s main selling point is suddenly a curse. And its culture of decadence has sparked an ugly scandal that has turned winter’s dream into a nightmare.

There is growing evidence that this picture-postcard town is a sort of Ground Zero for the European coronavirus crisis; the source of multiple outbreaks which have already killed thousands and brought the continent to a halt.

To blame (at least in part) are the local authorities, who appear to have deliberately underplayed – or even sought to cover up – the fact that the virus has for some time been infecting both the resort’s workers and tourists.

On Tuesday, Austria’s public prosecutors opened an investigation into claims that a suspected case was illegally hushed-up in late February, as part of a bungled plot to prevent Ischgl’s hoteliers, lift operators, shopkeepers and bar owners from missing out on tourists’ cash. 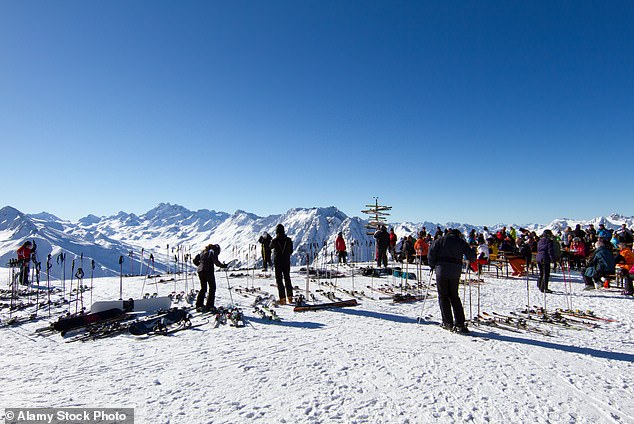 The popular resort, in the province of Tyrol, Austria is believed to be Ground Zero for the coronavirus outbreak in Europe

An unnamed venue is suspected of ‘recklessly endangering people through infectious disease’ by failing to report that a member of its staff was taken seriously ill with coronavirus symptoms.

There is also mounting anger at local health bosses who issued PR statements brazenly claiming that all was well even after March 7, when a barman at Kitzloch – the town’s busiest apres-ski venue – formally tested positive for coronavirus.

Resort bosses refused to tell bars and nightclubs to close for another three days.

They decided to keep the resort’s hotels and ski lifts running for even longer, seemingly due to a scandalous mixture of greed and incompetence.

Ischgl did not fully close down until March 15 – more than ten days after the Icelandic government had formally raised the alarm with Austria’s government about the number of its holidaymakers who had fallen ill after staying there.

Yesterday, it was even claimed that the killer virus could have been doing the rounds of Ischgl since the middle of January. 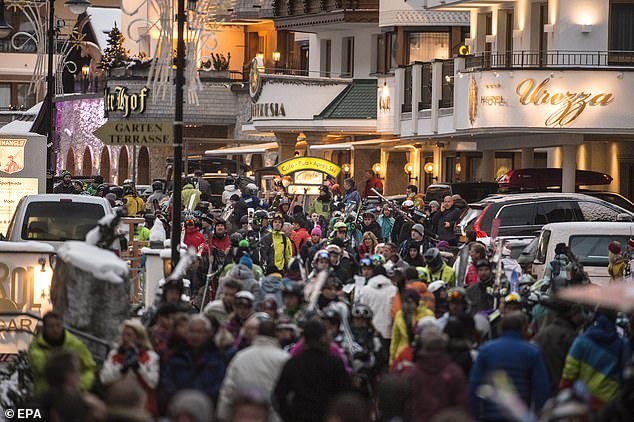 The number of infections in Ischgl  is double that of Vienna, the country’s capital, which has a population of 2 million

Daren Bland, an IT consultant from East Sussex, told the Daily Telegraph that he and three friends – two from Denmark and one from the US – were all struck down with a mystery illness after visiting the resort between the 15th and 19th of that month.

Mr Bland, 50, then reportedly passed the virus to his wife and two children, one of whom was off school for a fortnight. It is then said to have spread throughout the local community in Maresfield, a village near Tunbridge Wells, with many children absenting themselves from schools.

It should be stressed that the family has not yet received tests that will establish whether they did indeed contract coronavirus, which was not formally detected in the UK until January 29.

The earliest confirmed example of transmission within Britain was not until February 28. Were such tests to prove positive, however, it would add weight to suggestions (raised in an Oxford University study this week) that far more Britons than previously thought have already been infected with the virus and recovered – in theory rendering them immune.

Intriguingly, Mr Bland’s visit to Ischgl included a visit to the aforementioned Kitzloch – a watering hole at the bottom of the resort’s main gondola where more than half the bar staff were recently found to have coronavirus. 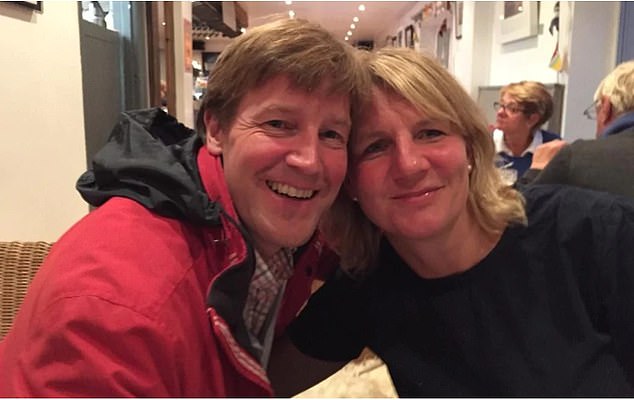 Daren Bland, an IT consultant from East Sussex, said he and three friends were all struck down with a mystery illness after visiting the resort

So noisy and crowded is the venue that waiters use brass whistles to alert patrons as they navigate their way to tables. Inebriated holidaymakers are often invited to blow on the whistles themselves – an activity which would likely further the spread of the virus.

They also play beer pong, a party game which can involve players spitting a ping pong ball into beer glasses. One ball is often re-used by multiple players.

The first real sign that all was not well in the resort came on March 1, when a flight carrying holidaymakers from Munich landed in Reykjavik.

Some 15 of them had fallen ill during the journey and promptly tested positive for coronavirus.

Iceland’s government then placed the Tyrol on its ‘at risk’ register of destinations, alongside South Korea and Wuhan in China – but when they warned the region’s health authorities, their concerns were dismissed out of hand.

In a March 5 press release, Franz Katzgraber, the Tyrol’s top health official, said: ‘From a medical point of view, it’s improbable that the infections occurred [here].’

Instead, he claimed the 15 visitors were likely to have contracted the virus on the plane home.

Large numbers of visitors from Norway then began testing positive on March 7, only for the Tyroleans to issue another dismissive press release stating there was ‘no reason to worry’.

Although the Kitzloch barman, a 36-year-old German national, had by then also tested positive, the PR men once again claimed that ‘from a medical point of view, it is rather unlikely’ he could have passed it on to patrons. They were wrong.

Astonishingly, of Europe’s confirmed coronavirus victims, more than half of the Norwegians, a third of the Danes and one in six of the Swedes say they caught it while skiing in Austria. 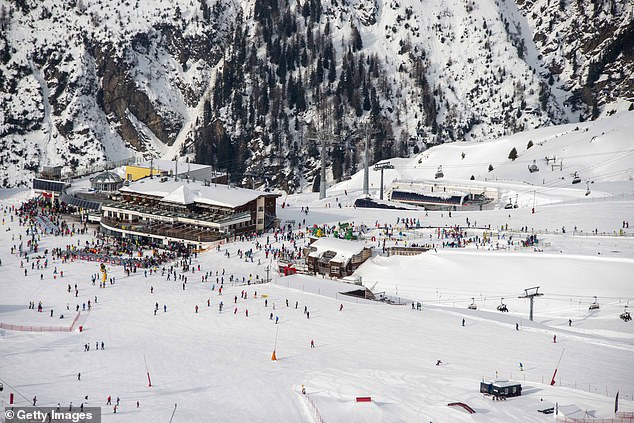 On March 10, authorities finally ordered all bars in Ischgl to close – but left both the ski lifts and hotels open. Inevitably, the virus continued to spread, forcing the government to place the surrounding valley, known as Paznauntal, under quarantine on March 13.

Amazingly, the resort still decided to allow its lifts – some of which are cramped gondolas – to continue to operate until Sunday March 15. That afternoon, a mountain bar known as the Blauer Affe (‘Blue Monkey’) hosted one last party, inviting guests for an ‘apocalypse beer’ – a bottle of Corona with an added shot of tequila – for the knockdown price of €6.

An hour before the quarantine was announced, hotels received an email from the tourist office warning them. Several ordered staff to pack and flee, helping to spread the virus.

Holidaymakers were packed onto buses and taken 65 miles to Innsbruck. None were isolated and most travelled home – many bringing coronavirus with them.

A withering investigation in Vienna’s Der Standard newspaper told how one local politician, Franz Hörl, who is also a hotelier and lobbyist for the local lift-making industry, attempted to persuade parliament that some resorts should stay open for an extra week.

Mr Hörl insisted: ‘We haven’t covered up anything.’ Others might disagree.

The Austrian newspaper certainly does. In an editorial, it declared: ‘Greed has defeated the responsibility for the health of the citizens and the guests. They wanted to take this last tourist week so that the cash registers of lift operators and hoteliers rang.’

If so, then the final cost of this brazen avarice doesn’t bear thinking about.