Rihanna shared her plans to expand her family within the next 10 years and detailed her anxiety battle in a new interview.

The chart-topping musician and businesswoman, 32, made history by becoming the first person to grace the cover of British Vogue in a durag for a high-fashion shoot captured by critically-acclaimed photographer Steven Klein.

Sharing her personal aspirations, the singer revealed she’s open to raising ‘three or four children’ alone if she hasn’t found The One, telling the publication in its May issue: ‘Would I do it on my own? Hell yeah!’

‘Would I do it on my own? Hell yeah!’ Rihanna shared her plans to expand her family within the next 10 years and detailed her anxiety battle in a new interview for British Vogue’s May issue

‘I’ll have kids – three or four of ’em’, the Umbrella hitmaker said.

The fashion mogul – who split from Saudi billionaire Hassan Jameel in January following a three-year romance – insisted being in a relationship will not hold her back from her plans on becoming a mother.

Hailing ‘love’ as the most fundamental element in being a parent, Rihanna said: ‘Hell yeah, I feel like society makes me want to feel like ‘Oh you got it wrong …’ They diminish you as a mother, [if] there’s not a dad in your kid’s lives. 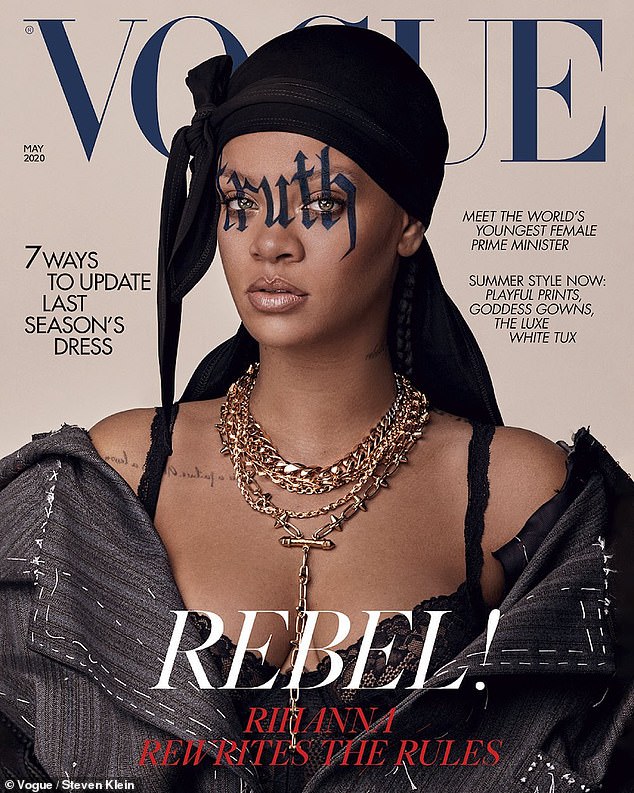 Making a statement: The chart-topping musician and businesswoman, 32, made history by becoming the first person to grace the cover of the publication in a durag

Whilst the Bajan star is set in her ways when it comes to her parenting plan, she’s less sure about her career goals, as she is keeping her fans in the dark about when they can expect her next studio album.

The fashion designer said she’s working ‘aggressively’ on new music, but isn’t imposing any strict deadlines on herself.

She explained: ‘I can’t say when I’m going to drop … but I am very aggressively working on music.

‘I don’t want all my albums to feel like themes. There are no rules, there’s no format, there’s nothing. There’s just good music and if I feel it, I’m putting it out.’ 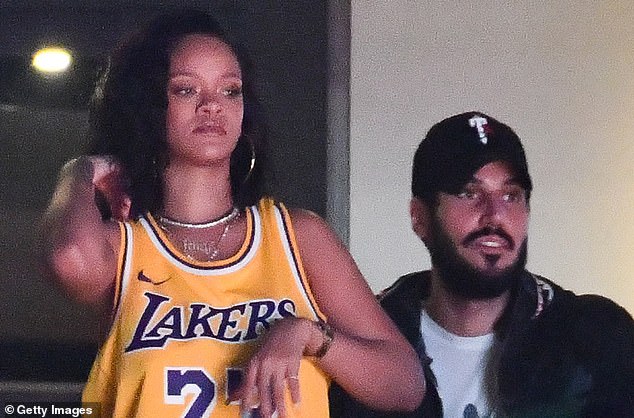 ‘I’ll have three of four of ’em’: The fashion mogul insisted being in a relationship will not hold her back from her plans on becoming a mother (pictured with ex Hassan Jameel in 2019)

The Work singer confirmed she’s also set to explore reggae music, sharing: ‘That is happening… I feel like I have no boundaries.

‘I’ve done everything – I’ve done all the hits, I’ve tried every genre – now I’m just, I’m wide open. I can make anything that I want.’

Following nearly two decades in the spotlight, the belter said she’s still coming to grips with life as a superstar, admitting: ‘Being on camera, being in a room full of celebrities is still not normal for me, by the way.’

The media personality revealed her nerves were once so intense that she cancelled her performance at the 2016 Grammy Awards, which a representative originally claimed was only due to bronchitis. 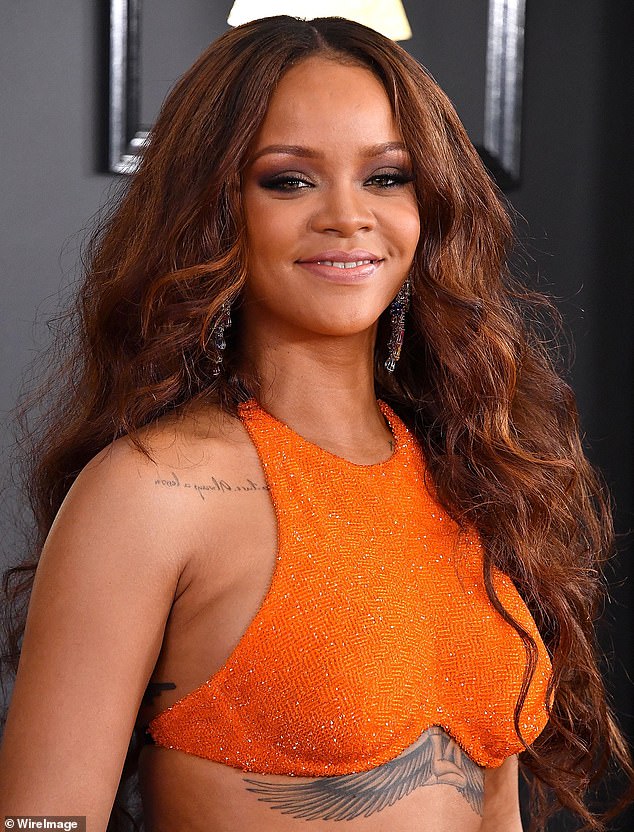 ‘Being in a room full of celebs is still not normal for me’: Rihanna revealed her nerves were once so intense that she failed to attend the 2016 Grammys (pictured at the 2017 show) 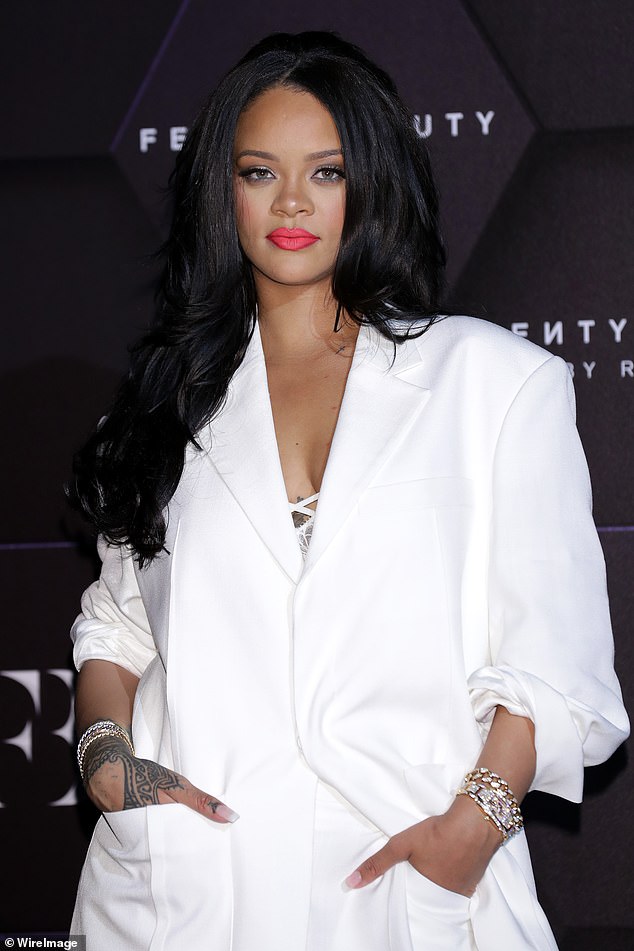 ‘It turns into disappointment that this is groundbreaking right now’: On the success of Fenty Beauty, the TV and film star said she considered her aim to reach a diverse audience ‘normal’

Rihanna explained: ‘I can’t listen to my voice, you know. Oh, I’m nervous before even getting in the car to go to something, It can be devastating.

‘And when I pull up to the red carpet, I’m like…Are you kidding me? I left the Grammys one time. Left! In the middle of my hair and make-up. My hair half up, half of my lash on…’

In 2017, the business-savvy star entered the world of make-up and launched her Fenty Beauty line, with her products selling out across the globe.

On the success of her cosmetic brand, the TV and film star said she considered her aim to reach a diverse audience ‘normal’. 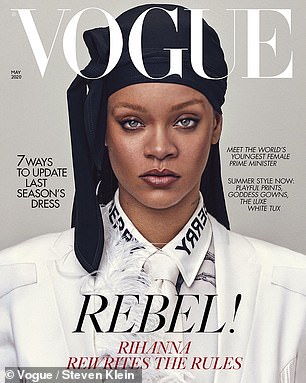 Available soon: Read the full feature in the May issue of British Vogue , available via free digital download and on newsstands this Friday

She detailed: ‘I’m shocked by people saying, ”Oh my god, what made you think of making make-up for black girls?” I’m like, What? You thought this was like a marketing strategy? Like I’m a genius?

‘It’s shocking most of the time, then it turns into disappointment that this is groundbreaking right now. In my mind, this was just normal.’

Last year, Rihanna left fans stunned when she casually revealed she’s been living in London since 2018.

On how she likes to spend her spare time, the brunette said: ‘I’d rather go to Brixton. But if I do that now, and I try to get some Jamaican food, it’s going to be an event, you know?

‘So if I want a night off, I go hang with the people I would never hang with. And I just, I’m just in my bubble. Which I really enjoy about London.’

Rihanna also shared her thoughts on racism, and how it differs between America and the English capital.

‘I think police brutality is probably extremely severe in America, but racism is alive everywhere. Everywhere’, she shared.

‘It’s the same [in the UK]. It’s either blatant, which is becoming more and more of a norm, or it’s underlying, where people don’t even know they’re being obvious about it. You know, it’s just a subconscious layer that’s embedded from their entire core.’

Read the full feature in the May issue of British Vogue, available via free digital download and on newsstands this Friday.