German authorities are warning against singing and several states have banned it from church services over fears it spreads the coronavirus.

The ‘increased production of potentially infectious droplets’ involved in singing mean that choirs are facing a longer shutdown even as shops and restaurants re-open, the government says.

In one case, at least 40 people were infected at a church service in Frankfurt where the congregation had been singing and not wearing masks.

The transmission of the virus is not yet fully understood, but anecdotal evidence has been enough to convince German authorities that singing is a risky activity.

Berlin Cathedral choir director Tobias Brommann says ‘you inhale and exhale very deeply’ during singing, meaning that ‘if there are virus particles floating in the air then they can get into the lungs relatively quickly’.

Brommann and 30 of his choristers were struck down with the virus in early March, with another 30 showing symptoms.

‘We also can’t be sure if those without symptoms were not infected too, as we have not done antibody tests,’ he said.

The choir had gathered for a rehearsal on March 9 when Berlin had fewer than 50 cases and public events were still permitted.

More recently, there was a spate of infections after a church service in Frankfurt with authorities now trying to trace all the worshippers.

At least 107 people were affected by the outbreak, some of them thought to be people who were subsequently infected.

In recommendations for the resumption of church services, the federal government stated that singing should be avoided ‘because of the increased production of potentially infectious droplets, which can be spread over greater distances’.

Several states have heeded the advice and banned singing from services.

There is also some scientific evidence to suggest that singing produces especially high numbers of potentially infectious micro-particles.

According to a study published in the Nature journal in 2019, saying ‘aah’ for 30 seconds produces twice as many such particles as 30 seconds of coughing.

At the Church of the Twelve Apostles in Berlin’s Schoeneberg district, there have been no choir rehearsals since early March.

Soprano Heike Benda-Blanck, 59, has been singing there for 10 years. ‘I do miss it,’ she said. ‘You can still sing in the shower but it’s not the same.’ 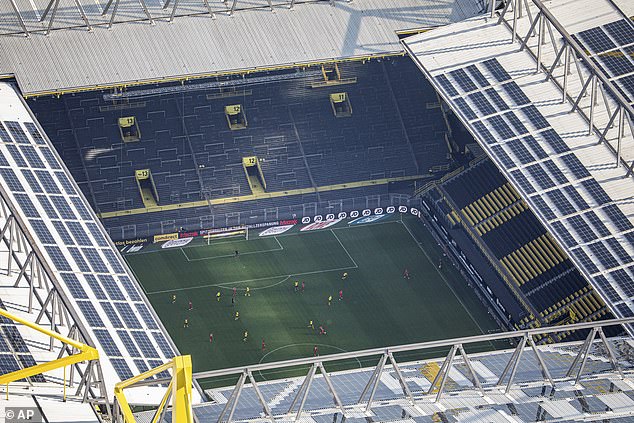 Bundesliga football matches are being played behind closed doors for now (pictured, Dortmund v Bayern yesterday) with no risk of raucous singing

Some research has given cause for optimism. The Bundeswehr University in Munich published a study in early May showing that singing only disturbs air flow up to half a metre (1.6ft) in front of the person.

However, institute head Bernhard Richter warns that the study did not include aerosol measurements – tiny particles that could circulate much further in a room.

The institute published updated guidelines this week that include limiting the number of people in the room and the length of rehearsals.

‘This is a work in progress,’ Richter said. ‘Of course singers want clear statements, black and white, but then you have to say, maybe we don’t know yet.’

In proposals to the authorities, Germany’s Catholic Church has endorsed ‘quiet singing’ in services, as well as restricting numbers. By contrast, the Protestant Church continues to advise a complete ban.

It remains to be seen whether singing can be controlled at other events in Germany, such as Bundesliga football matches, which are being played behind closed doors until further notice.

Singing could also potentially spread the virus at large events such as rock concerts and the Oktoberfest beer festival, where rowdy singing is an integral part of the proceedings – although it has already been cancelled for 2020.

A spokesman for the interior ministry said that since all major events are banned until at least August 31 in Germany anyway, this remains a ‘hypothetical question’.

‘It depends on how the infection situation develops,’ he said.

Under new rules, Germans can meet friends in the park, dine in a restaurant, play sports, go to church, browse the shops, watch football and even go swimming.

The RKI’s latest figures today showed a total of 179,364 cases in Germany, an increase of 362 since yesterday.

Germany has suffered 8,349 deaths – a lower rate than in Britain, France, Spain or Italy – with 47 recorded in the last day.