Boris Johnson today announced the phased reopening of primary schools in England will begin as planned on Monday.

The Prime Minister told the daily Downing Street coronavirus press conference that reception, year one and year six pupils will be the first to return to classrooms.

Nurseries and other early years settings will also reopen on Monday while secondary schools will welcome back some year 10 and year 12 students from June 15.

The schools announcement came as Mr Johnson set out his strategy for the further loosening of lockdown rules, something he said was now possible after the Government’s five tests on avoiding a second wave of the disease were met.

He said the R rate of transmission of coronavirus remained below the key figure of one – currently standing between 0.7 and 0.9 – and that meant ‘limited and cautious’ changes were possible.

He said: ‘The result is we can move forward with adjusting the lockdown in England on Monday.

‘First, as I set out on Sunday, we will now reopen schools to more children. Closing schools has deprived children of their education and as so often it is the most disadvantaged pupils who risk being hardest hit.

‘On Monday we will start to put this right in a safe way by reopening nurseries and other early years settings and reception, year one and year six in primary schools.

‘A fortnight later on June 15 secondary schools will begin to provide some face-to-face contact time with years 10 and 12.’

The Prime Minister’s announcement comes after Schools Minister Nick Gibb admitted it may not be possible for all primary school pupils to return to the classroom before the summer holidays.

The Government’s coronavirus recovery strategy said the ‘ambition’ is for every pupil to be able to return for at least a month before the start of the next academic year in September.

But Mr Gibb said it is ‘difficult to say’ whether that ‘ambition’ will be delivered on as he insisted all decisions on easing restrictions will be based on the latest scientific evidence on the rate of transmission of the disease.

Boris Johnson, pictured in Downing Street, today announced primary schools in England will start to reopen on Monday next week 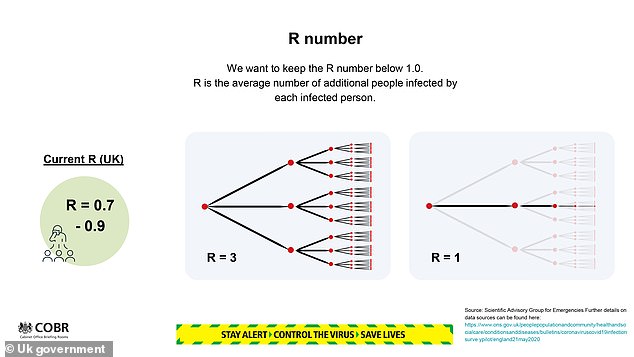 The latest Downing Street data showed that the R rate of transmission for coronavirus is currently between 0.7 and 0.9. The Government has said it must be below one for lockdown to be eased 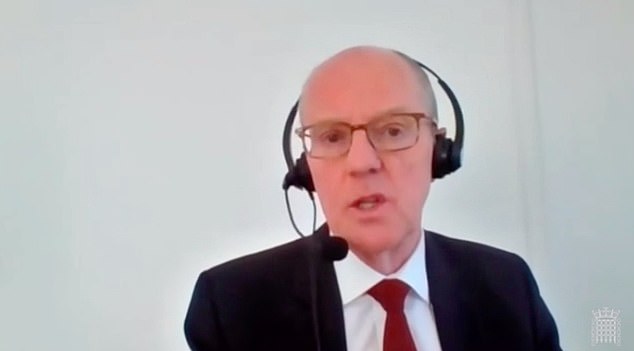 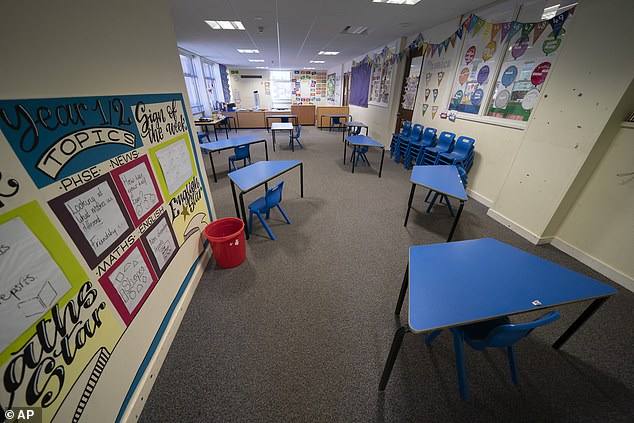 The Government’s ‘ambition’ is for all primary school pupils to get some time in the classroom before the next academic year. A socially distanced classroom is pictured at a school in Manchester

The Government’s coronavirus recovery plan, published earlier this month, states: ‘The Government’s ambition is for all primary school children to return to school before the summer for a month if feasible, though this will be kept under review.’

Mr Gibb was grilled on the issue during an appearance in front of the Education Select Committee.

He was told by MPs that social distancing rules would mean many schools would not have enough space to welcome back all of their pupils at the same time.

Mr Gibb replied: ‘These are the kinds of factors that we are addressing when working out when and who can return to school.

‘It is why we are only inviting back reception, year one and year six in primary schools so there is the space in those schools for children to return and for infant schools to use other premises, perhaps the junior school, to enable children to return safely and to maintain the distances between pupils.

‘Safety is our overwhelming priority in this phased return of pupils returning to school.’

The chairman of the committee, Robert Halfon, then asked: ‘Is it unlikely… that the Government’s ambition for all children in primary school to return to school before the summer is going to happen?

‘When it was said it looked like it was pretty much, not a fait accompli, it did say under review but it looked like that was the plan of the Government.

‘Is this unlikely? I think you need to give some steer to teaching staff and support staff.’

Mr Gibb said: ‘It is difficult to say, Robert. It will be totally led by the science. We don’t know for certain until [today] that schools will return on June 1 for reception, year one and year six.

‘That will depend on the science although schools are planning for it and all the indications are that the science is leading in the right direction.’

He added: ‘So we don’t know until we see more evidence of the R factor continuing to reduce over the next few weeks.’

Mr Johnson’s plans to begin the phased reopening of primary schools from June 1 sparked a major backlash from unions and councils amid safety fears.

Some councils have told their local schools that they do not have to comply with the PM’s direction.

While ministers hope all primary school pupils will be able to return before the summer holidays, the plan for secondary schools is more restricted.

Students in year 10 and 12 will be able to meet with their teachers face-to-face from June 15 as they prepare for exam years.

But only one quarter of those year groups will be allowed back at any one time.

The rest of secondary school pupils will not be returning before the start of the next academic year.