Ministers today gave the green light for the return of professional competitive sport in England from June 1, with horse racing and Premier League football likely to be the first back.

However, all of the action will be behind closed doors with spectators banned from attending any events for the foreseeable future.

Culture Secretary Oliver Dowden made the announcement at the daily Downing Street press conference as he said the ‘wait is over’ after a three month break caused by the coronavirus outbreak.

The Government is hoping the return of televised live sport will provide a boost to the nation as it tries to recover from the current crisis.

Ministers today gave the green light for the return of professional competitive sport in England from June 1, with horse racing and Premier League football likely to be the first back (Pierre-Emerick Aubameyang and Sokratis of Arsenal during a training session in London today) 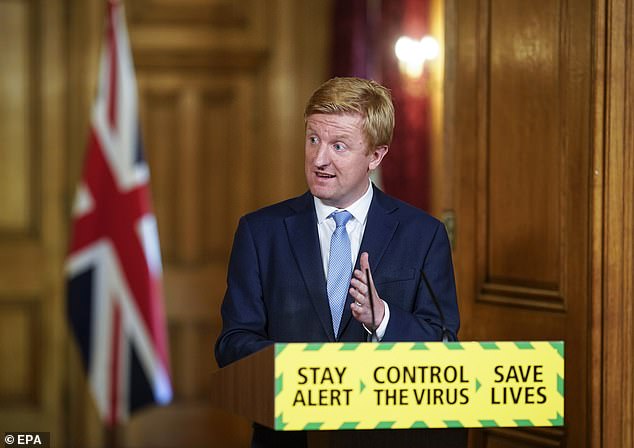 The first major sporting event expected to go ahead is the 2000 Guineas Stakes at Newmarket Racecourse on June 6.

Preparations are in the process of being finalised for the Premier League to return, with the season likely to get back up and running on June 17.

The Premier League has already struck a deal with broadcasters to televise a significant number of its remaining matches on free-to-air TV.

The Government today published a new set of guidance which all elite sport will have to comply with if it is to get back underway.

Ministers published stage one guidance earlier this month which allowed professional athletes to return to individual training at official venues while maintaining social distancing from teammates.

Stage two guidance was then released on May 25 which made clear that elite athletes could resume competitive, close contact training so that they could get match fit.

But today’s stage three guidance is what professional sports leagues and competitions have been waiting for because it sets out that meaningful action can soon resume.

The publication of the rules is likely to trigger a wave of announcements in the coming weeks as different sports set out how and when they will get back underway.

Mr Dowden said: ‘The wait is over. Live British sport will shortly be back on in safe and carefully controlled environments.

‘This guidance provides the safe framework for sports to resume competitions behind closed doors.

‘It is now up to individual sports to confirm they can meet these protocols and decide when it’s right for them to restart.

‘This is a significant moment for British sport. By working with clinicians every step of the way, we are creating the safest possible environments for everyone involved.’

The new guidance for elite sport is the product of consultation between the Government’s health and science experts, Public Health England and medical representatives across Olympic, Paralympic and professional sports governing bodies.

The ‘strict conditions’ set out by ministers make clear that spectators will not be allowed to go to any of the events which return.

Assuming conditions are met, the 2000 Guineas Stakes horse race is likely to be the first major sporting event allowed to go ahead.

The race, taking place at Newmarket Racecourse on June 6, will be broadcast on free-to-air TV.

The Government, Public Health England, the Premier League and the English Football League have been locked in talks for weeks over the return of the nation’s favourite game.

The Premier League is targeting a return on June 17 while the Championship could restart soon after.

However, League One and League Two look set to go the way of Scottish football, with early curtailments.

The return of professional football will be subject to a successful vote from the relevant clubs and the support of the police.

The Government had urged the Premier League to widen access for for fans to view live coverage given the fact that none can attend matches in person.

The Premier League this week agreed a deal which will see some matches shown for free on Sky’s ‘Pick’ TV available on Freeview and for the first time ever on the BBC. 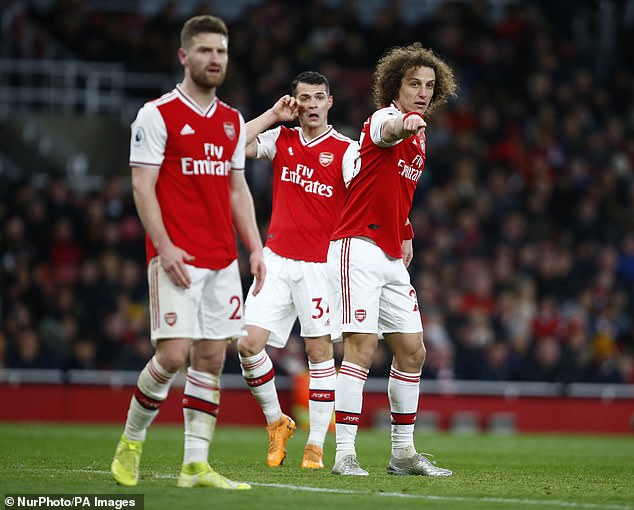 The Premier League is targeting a June 17 return to complete the 2019/20 season. The first game is expected to be Manchester City V Arsenal

The Premier League is aiming to complete the remaining 92 matches of the 2019/20 season.

The first matches back are slated to be Aston Villa v Sheffield United and Manchester City v Arsenal, which would complete the 29th round of fixtures.

A full set of fixtures would then take place across the weekend of June 19-21.

All games are due to be behind closed doors and televised while police have requested a handful of matches, including any in which Liverpool could secure the title, be held at neutral venues.

The FA Cup quarter-finals have been provisionally rearranged for the weekend of June 27-28, with the semi-finals on July 17-18 and the Wembley final set for August 1.

Premier League chief executive Richard Masters welcomed the announcement by the Government and said: ‘We have provisionally planned to restart the Premier League on 17 June, but there is still much work to be done to ensure the safety of everyone involved.

‘This includes consulting with our clubs, players and managers – along with all our other stakeholders – as the health and welfare of our participants and supporters is our priority.

It will ultimately be up to leagues and competitions to decide whether it is ‘safe and appropriate’ to return and resume competition.