Costa BLOCKED-a! Spanish tourism minister dashes holiday dreams for thousands of Britons after saying UK government must ‘improve’ its Covid record BEFORE they will be allowed in

Brits’ hopes of holidaying abroad have been dashed as the Spanish tourism minister says the UK must ‘improve’ its situation with coronavirus before tourists are allowed back.

Maria Reyes Maroto said British tourists will not be amongst those possibly allowed into the Canary Islands and the Balearics in two weeks ahead of the reopening of Spanish borders to holidaymakers from July 1.

Instead, she said tourists from Germany and the Nordic countries were the most likely to be permitted entry for the trial-run return of holiday-goers.

The tourism minister said the Spanish and regional government were in talks with holiday providers TUI and Jet2holidays about the prospect of Brits returning to the country.

The Mirror reported she told Spanish media the likelihood of holidaymakers from the UK being the first to visit Spain were slim: ‘There the health situation still has to improve.

‘For us it is important to guarantee that people arrive healthy and leave healthy.’

The suggestion of a ‘test-run’ for the return of tourists to the county is yet to be approved by the government but if it does get the go-ahead Mrs Reyes Maroto said Germany and the Nordic countries were most likely to be first because their ‘epidemiological situations are very good.’

The regional government in the Balearic Islands has been pressing for the trial-run return of tourists, with plans to commence the first entry from June 16. 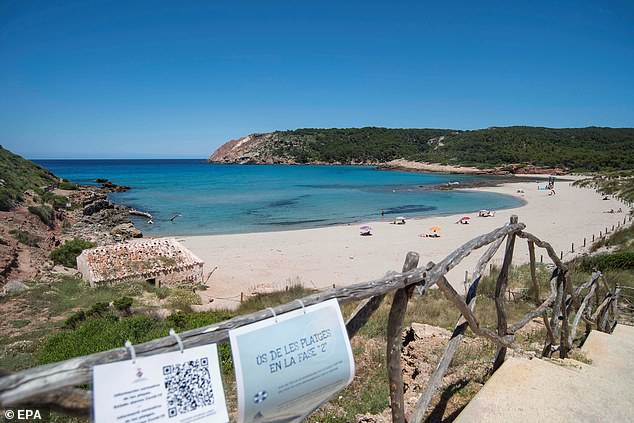 In its plans it has been campaigning for Madrid to allow 3,000 German holidaymakers to visit the islands.

Also included in the proposed test-run are the Canary Islands and Mrs Reyes Maroto also has plans to incorporate areas such as Costa Blanca and Costa del Sol if the regional governments wish to be involved.

Restrictions in Benidorm and Marbella are expected to be reduced tomorrow with the prospect of reopening beaches.

However, Benidorm mayor Toni Perez made the decision to keep beaches closed until mid-June.