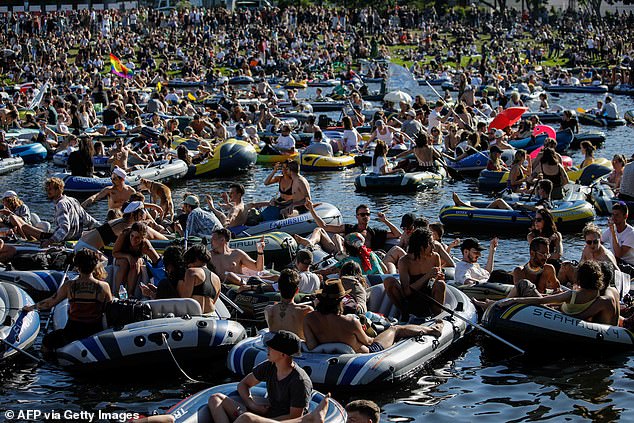 The Covid-19 R rate has risen to 1.95 in Berlin prompting authorities to switch one of their ‘corona traffic light’ warning systems to red.

The number of active cases in the German capital rose to more than 300 on Tuesday, with another 35 cases recorded as compared with 23 new cases the day before.

Berlin’s Health Senator Dilek Kalayci warned there had been a ‘turnaround’ in the city, just days after he expressed his ‘horror’ after thousands went out to enjoy the weekend’s sunny weather.

On Sunday, a protest in support of the city’s club scene turned into a huge techno party with up to 3,000 people attending in the Kreuzberg district.

Kalayci said today that the R number was more likely to fluctuate while the total number of infections was low, but added that ‘the number of new infections is increasing, so that you can recognise a change of trend.’

But Berlin’s R rate is one of three traffic lights which must turn red before lockdown changes are implemented in the city. The other two being for new infections and for the proportion of intensive care patients with coronavirus. 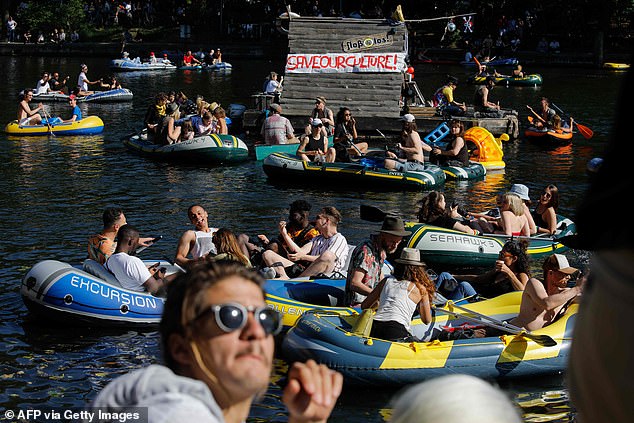 Thousands attended a party on Berlin’s Landwehr canal on Sunday

WHAT IS THE R NUMBER?

Every infectious disease is given a reproduction number, which is known as R0 – pronounced ‘R nought’ – or simply R.

It is a value that represents how many people one sick person will, on average, infect if the virus is reproducing in its ideal conditions.

Most epidemiologists – scientists who track disease outbreaks – believe the SARS-CoV-2 virus, which causes COVID-19, has an R value of around 3.

But some experts analysing outbreaks across the world have estimated it could be closer to the 6.6 mark.

As an outbreak goes on, the R0 may be referred to more accurately as Re or just R, as other factors come into play to influence how well it is able to spread.

Estimates of the COVID-19 R vary because the true size of the pandemic remains a mystery, and how fast the virus spreads depends on the environment.

As an outbreak progress the R may simply be referred to as R, which means the effective rate of infection – the nought works on the premise that nobody in the population is protected, which becomes outdated as more people recover.

Germany as a whole recorded another 213 cases on Tuesday, with 11 new fatalities.

It comes as the country announced it would lift a travel ban for EU member states, plus Britain, Iceland, Norway, Liechtenstein and Switzerland from June 15.

Speaking to reporters after a cabinet meeting on Wednesday, foreign minister Heiko Maas said this was contingent on there being no entry bans or large-scale lockdowns in those countries.

Maas said all countries concerned met those criteria except Norway due to an entry ban and Spain, where he said parliament was deciding whether to extend an entry ban.

Maas said the travel warning would be replaced with guidelines, adding that Germans would be urged not to travel to Britain when not essential while a 14-day quarantine in place.

‘Travel advice is not an invitation to travel – and we want to make clear that the travel guidelines may also strongly discourage travel, for example to Britain as long as there is a 14-day quarantine for all those arriving there,’ Maas said.

‘We will continue to make the lifting of the travel warning dependent on how the situation on the ground develops,’ he said, adding new warnings could be issued if a country records more than 50 newly infected people per 100,000 over seven days.

‘This is a good signal for the many people in Europe who want to go on holiday in the summer or visit friends and relatives abroad,’ he said.

‘It is also good news for 26 million men and women employed in the European travel and tourism industry’.

As Germany looks to breathe life into its tourism industry, Chancellor Angela Merkel’s ruling coalition today wrestled over the final details of a massive stimulus package. 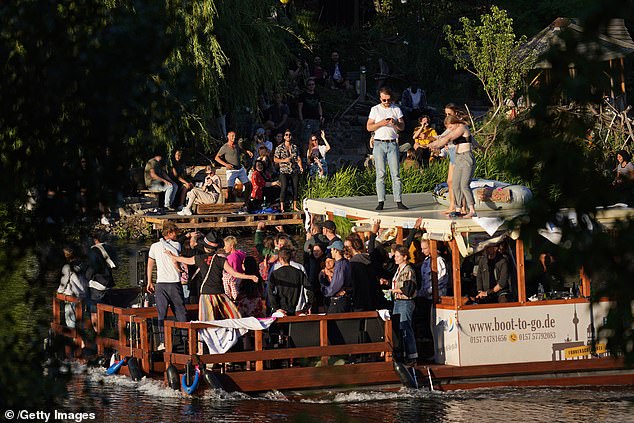 ‘The labour market remains under immense pressure due to the coronavirus pandemic,’ Labour Office head Detlef Scheele said. But he added that unemployment did not rise as much as in April.

Companies logged requests to put 1.06 million people on reduced working hours under the government’s Kurzarbeit short-time working scheme from May 1 to May 27, the office said.

That was in addition to requests for 10.66 million people made in March and April combined, the labour office said, adding that this did not, however, mean that all of those people would actually end up on the scheme. 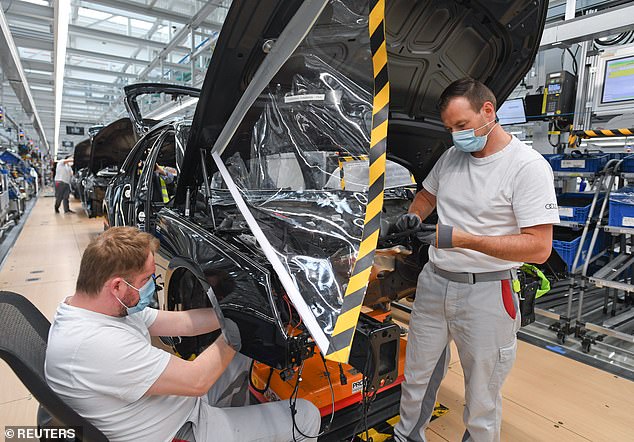 Audi employees working at a factory in Ingolstadt on Wednesday 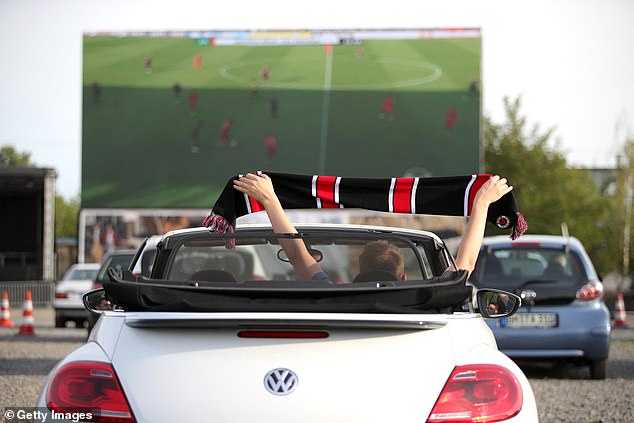 ‘Short-time work has clearly exceeded the level of the 2009 crisis,’ Scheele said. Around 1.5 million people were on the programme back then.

Short-time work is a form of state aid that allows employers to switch employees to shorter working hours during an economic downturn to keep them on the payroll.

A poll by the Ifo economic institute published on Tuesday showed the number of workers in Germany on reduced hours had risen to 7.3 million as the pandemic affects most sectors.