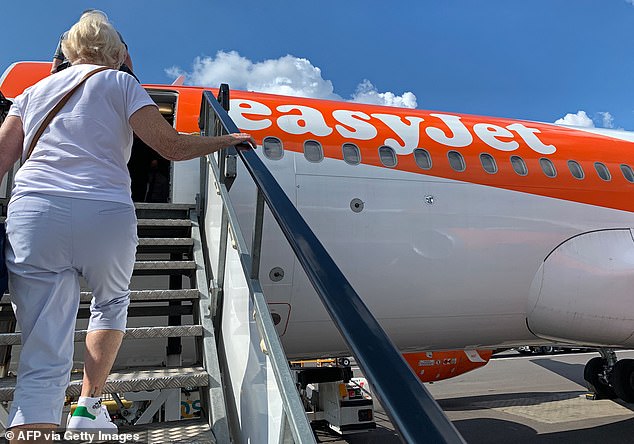 Easyjet turns to shareholders to shore up finances with £450m fundraising… but will Stelios oppose it?

Easyjet has gone cap in hand to shareholders to raise up to £450million as it scrambles to shore up its finances.

The budget airline plans to raise more cash by selling almost 60m new shares, the equivalent of just under 15 per cent of existing shares in the company.

It said it hopes this would raise £400million to £450million to boost its cash reserves.

Budget airline Easyjet plans to raise more cash by selling almost 60m new shares, the equivalent of just under 15 per cent of existing shares in the company

But the fundraising is so large that it will have to secure the backing of shareholders for a third of the amount it hopes to raise, with the potential that founder Stelios Haji-Ioannou may oppose the deal.

A vote has been pencilled in for July 14 or around then. The emergency fundraising shows the dire situation Easyjet and other airlines have found themselves in as the pandemic has grounded flights and brought the industry to its knees.

The airline has already secured an emergency £600million loan from the Bank of England under the Covid Corporate Financing Facility set up by Chancellor Rishi Sunak to help big firms weather the crisis.

It has drawn on hundreds of millions of pounds worth of loans from its banks, reduced the size of its fleet and announced plans to cut up to 4,500 staff amid fears air travel will not recover until 2023.

So far it has raised an extra £1.7billion of the £2billion target it has been aiming for.

But yesterday it said it needed even more, and was hoping to raise £2.4billion.

Highlighting spiralling costs, it indicated it had burned through almost £1billion after grounding all planes for 11 weeks.

Last night Stelios was unable to comment as he was travelling, but his spokesman said he would be looking at the plans in detail.

Easyjet, which resumed some domestic flights last week, has started selling flights overseas for the summer and hopes to run a reduced schedule on three-quarters of its routes by the end of August.

But this hinges on whether the Government finalises ‘air bridges’ with key destinations, exempting passengers from quarantine.

The announcement came as it said it slumped to a £353million loss in the six months to the end of March, with passenger numbers down by more than 7 per cent.