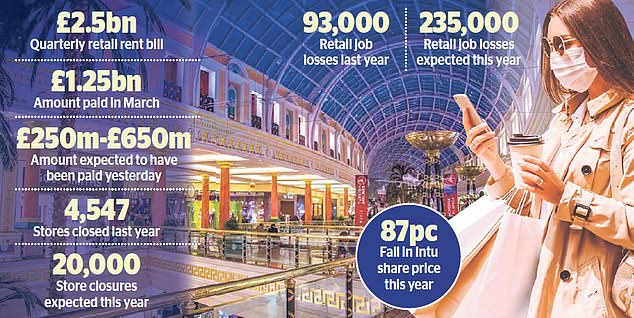 The incomes of savers and pensioners will suffer after much of a £2.5billion rent bill went unpaid in a grim day for landlords.

As shopping centre owner Intu teeters on the brink of collapse, experts said cash-starved shops were expected to pay as little as 10 per cent of the June quarterly rent bill due yesterday.

A third of the UK’s pubs, bars and restaurants, which pay £800million of rent per quarter, said they did not intend to pay a penny, according to UK Hospitality.

Rent shortfall: Intu, whose sites include the Trafford Centre (pictured) in Manchester and Lakeside in Essex, is teetering on the brink of collapse

In March, before the worst effects of the pandemic had set in, less than half of rent was collected as businesses tried to hoard cash to see out the crisis.

The situation has plunged retail landlords, who were already reeling from the shift online, into crisis.

Intu, whose sites include the Trafford Centre in Manchester and Lakeside in Essex, is teetering on the edge of administration while Birmingham Bullring owner Hammerson’s share price has fallen by more than two-thirds since the start of the year.

Boots has withheld rents and threatened landlords with store closures if they refuse to share the pain.

The struggling chemist – open throughout lockdown – wants to put rents on a ‘modern and equitable footing’.

It has said if landlords do not capitulate they will consider moving stores.

It has shut 60 stores in the UK this year, and will close another 140 by the end of the year. Bosses hope to mitigate sliding sales and profits in its retail and pharmacy businesses.

Boots has suffered from increasing competition from supermarkets and online rivals.

All bar 100 of its 2,600 stores remained open during lockdown. But despite a boost from pharmacy sales, trading was ‘severely impacted’.

It said: ‘The rapid change in retailing caused by the crisis means that we must now put our relationship with our landlords on a more modern and equitable footing.’

And experts are now warning that the loss of rental income for landlords will hit ordinary savers.

Pension funds, individual investors and the public sector own 60 per cent of the UK’s high streets, as retail property has long been seen as a safe source of income.

Funds will pay out less to savers if lower rents hit income and share prices.

The changing retail landscape has also caused the value of high street property to fall around 25 per cent in the last 12 months.

Vivienne King, chief executive at Revo, which represents retailers, property owners and local authorities, said: ‘The loss of income will travel quickly through the payment chain to all corners of the economy.’

Bill Hughes, Legal and General’s head of real assets, said: ‘Most retail properties are effectively owned by the normal person on the street – pensioners and savers who have invested in some sort of long-term savings. The risk of loss of income has never been there before.’

Many of the UK’s largest retailers, including JD Sports, Superdry and Topshop’s owner Arcadia, yesterday withheld or sought to defer some of their rent bill, although insiders said negotiations were ongoing.

Fashion firm Next paid its bill in full and Primark withheld some rent, asking landlords to ‘share the burden’, after boss John Bason said the virus was ‘a step-change in rent renegotiations’.

Without specific rent holidays, any rent not paid will build up as debt, putting further pressure on shops and pubs trying to recover from the pandemic.

Landlords are unable to evict tenants until the autumn after the Government extended its ban on evictions for non-payment of rent.

And experts have also said rents will be permanently hit by the impact of lockdown, many months of social distancing and a rapid move to online shopping.

Fashion chain Zara is closing 1,200 stores internationally to focus on its online business, while shoe outlet JD Sports put Go Outdoors into administration on Tuesday to cut rents on its 67 stores.

Chains such as Cath Kidston, Laura Ashley and Victoria’s Secret’s UK business have gone bust, while Oasis and Warehouse have become online-only brands after they were bought by Boohoo.

Debenhams has used its administration to renegotiate leases on stores.

Julie Palmer, partner at Begbies Traynor, said: ‘There will be a crisis of confidence in the business of owning retail space.

‘Traditional high-street retail has created a house of cards that is at risk of collapsing.’

Mark Burlton, founder of advisory company Cross Border Retail, said: ‘If landlords and tenants can’t agree what the actual rent should be, then a number of landlords face the real prospect of going bust.’

Despite being open throughout the lockdown Boots has paused rent payments to larger landlords. Bookmaker William Hill also withheld rent.