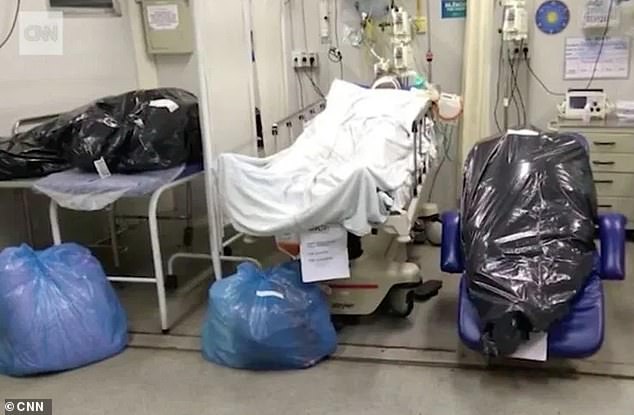 Shocking images show two bodies of coronavirus victims stuffed in bin bags lying next to a patient in a hospital in Rio de Janeiro as the killer virus continues to wreak havoc in Brazil.

A screen separates the patient from one of the corpses, while the other body lies just an arm’s length away, in a photo taken by the Rio Nurses Union.

Elsewhere, three containers – each of which can hold 75 bodies – are seen outside possibly the same hospital, in the grim footage broadcast by CNN.

Brazil has 52,000 confirmed deaths from Covid-19 and more than 1.1million people are infected – higher than anywhere outside the United States. 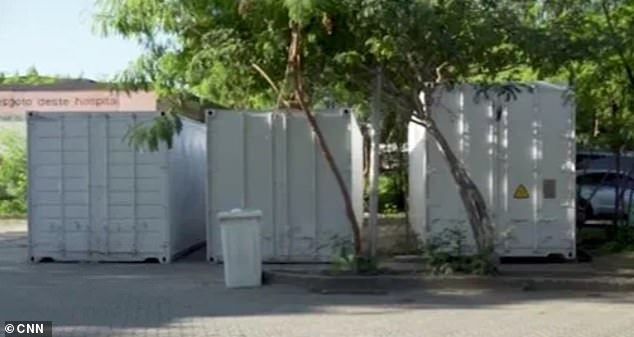 Another grim scene shows three containers – each of which can hold 75 corpses – outside possibly the same hospital in Rio. Brazil has 52,000 confirmed deaths from Covid-19 and more than 1.1million people are infected – higher than anywhere outside the US 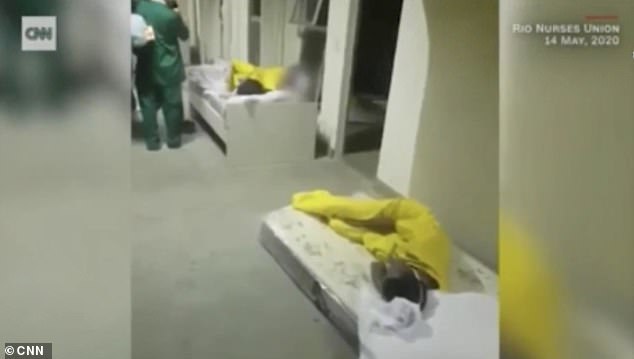 A lack of testing in the largest country in South Ameria, with a population of 209million, has led experts to suggest the real figure could be much higher.

Recent figures suggest 181 nurses have died in Brazil – the highest total in the world – while over 15,000 have contracted the bug, the Sun reported.

It comes as a federal judge today ordered Brazilian President Jair Bolsonaro, who has compared the coronavirus to a ‘little flu’, to wear a face mask in public, after the far-right leader repeatedly flouted containment measures in place in Brasilia.

On other fronts, Bolsonaro has openly defied the consensus among public health experts for slowing the outbreak.

The president has criticized lockdown and social-distancing orders issued by governors and mayors, saying their economic damage is worse than the disease.

But his most visible defiance has been going mask-less at a string of demonstrations in Brasilia, holding babies for photos and shaking hands with supporters. 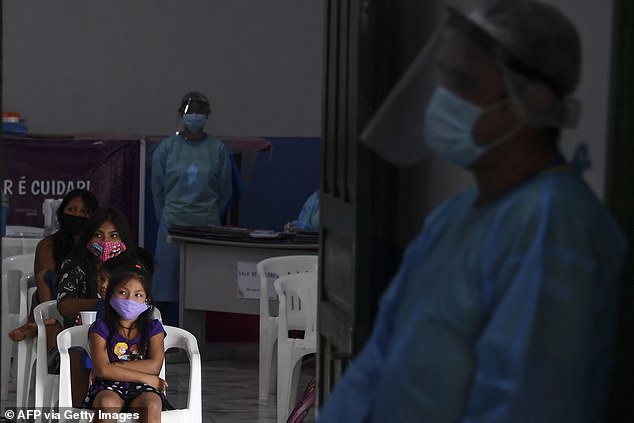 The pandemic has hit especially hard among indigenous groups, who have a history of vulnerability to outside diseases. Above, Brazilian indigenous people of the Marubo ethnic group wait to see a medical team of the Brazilian Armed Forces at a health post in Atalaia do Norte, Amazonas state, on the border with Peru, on June 20 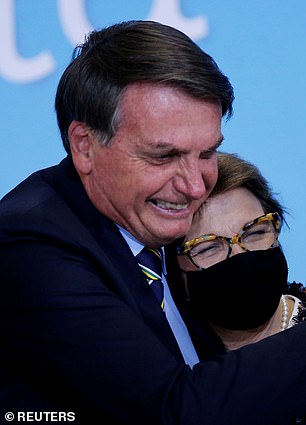 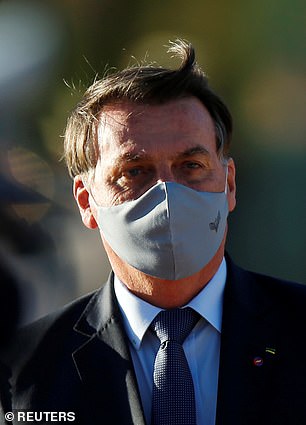 A federal judge today ordered Brazilian President Jair Bolsonaro – who has compared the coronavirus to a ‘little flu’  – to wear a face mask in public, after the far-right leader repeatedly flouted containment measures in place in Brasilia. (Bolsonaro is pictured left on June 17, and right, on June 23) 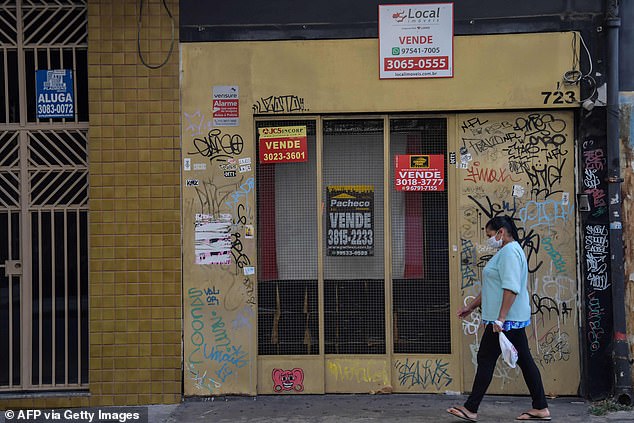 Last weekend, Oxford University started human clinical trials for a potential coronavirus vaccine in Brazil, sponsor Lemann Foundation said in a statement late on Monday. (Above, a woman walks past an empty store in Sao Paulo)

Other officials have run afoul of the local mask rule. The country’s former education minister, who resigned last week, was fined 2,000 reais for not wearing a mask on the capital’s central boulevard earlier this month.

The pandemic has hit especially hard among indigenous groups, who have a history of vulnerability to outside diseases.

More than 7,700 indigenous people have been infected in Brazil, and nearly 350 have died, according to the Brazilian Indigenous Peoples’ Association (APIB).

That has left many of Brazil’s 900,000 indigenous people fearful of catching the virus. 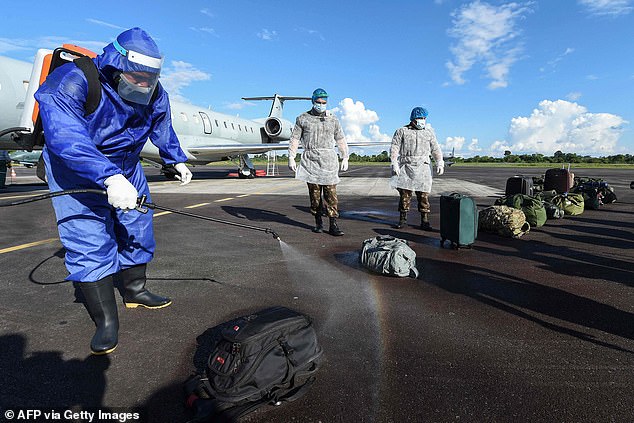 Members of the Brazilian Armed Forces disinfect luggage that arrived on a military flight at the airport, in Tabatinga, Amazonas state, northern Brazil, on June 17

Trials will count on 2,000 health workers volunteers in Sao Paulo and 1,000 people in Rio de Janeiro.

Brazil, where the disease is still rife, is the first country outside the UK to start testing the Oxford vaccine.

Researchers expect to launch the vaccine by year-end.

Another shocking video emerged in April showing bodies of dead coronavirus victims lying next to live patients fighting the disease inside a Brazilian hospital.

The horrifying footage surfaced as Brazil’s President Jair Bolsonaro sparked anger for firing his health minister Luiz Henrique Mandetta for urging the government to do more to fight the pandemic.

In total, the bodies of 14 COVID-19 victims were being kept next to patients.

The disturbing scenes were recorded at the Joao Lucio Emergency Hospital in the city of Manaus in the northern Brazilian state of Amazonas.

The video, reportedly recorded by a nurse, shows bodies of victims scattered throughout hospital hallways lying on gurneys, with some covered in blankets and next to intubated patients.

Mandetta, a respected orthopedist, promoted isolation and drew comparisons to Dr. Anthony Fauci over his handling of the pandemic, before he was axed.

In a statement to the press regarding the hospital video, The State Secretary of Health said that the victims had died between the night of April 15 and the morning of the April 16, adding that five of the bodies had since been removed.

Nine of the victims’ bodies remained in the hospital awaiting family members with death certificates, according to reports.