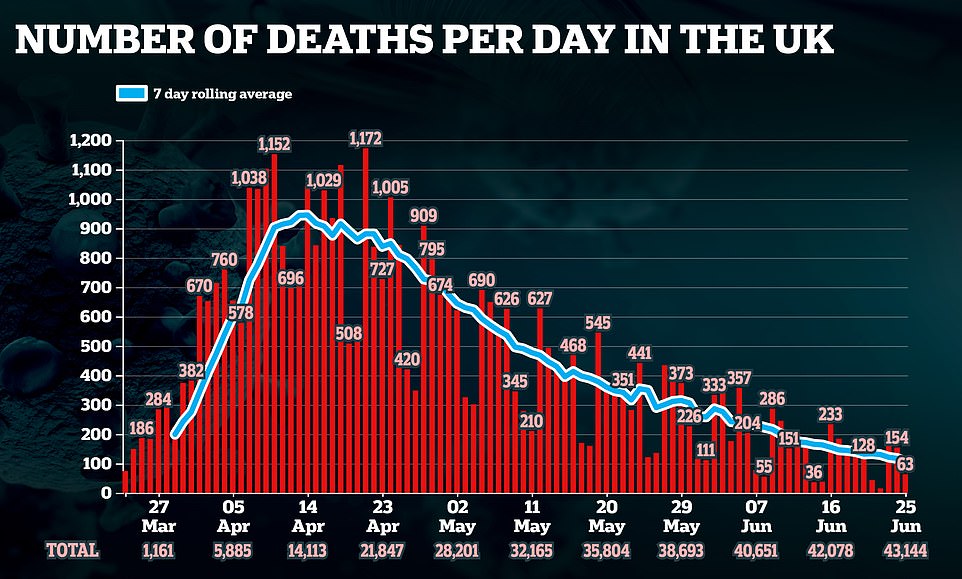 Britain today announced 63 more Covid-19 deaths as the outbreak that has seen the nation gripped by fear for months continues to retreat.

Department of Health bosses have yet to confirm the final toll, which includes laboratory-confirmed deaths in all settings.

The preliminary count, which only includes a fraction of the deaths in England, is calculated by adding up all of the updates from health chiefs in all of the home nations.

NHS England today reported 55 more victims in hospitals across the country. Wales recorded six victims in all settings, followed by two in Scotland and zero in Northern Ireland.

Just 154 deaths were recorded yesterday, meaning the daily fatality toll has dropped of 16 per cent in a week. And Department of Health data shows 137 were registered last Thursday.

It means the official death toll now stands at 43,144 — but other grim figures taking into account all suspected deaths shows the actual tally is at least 53,000.

In other coronavirus developments in Britain today: 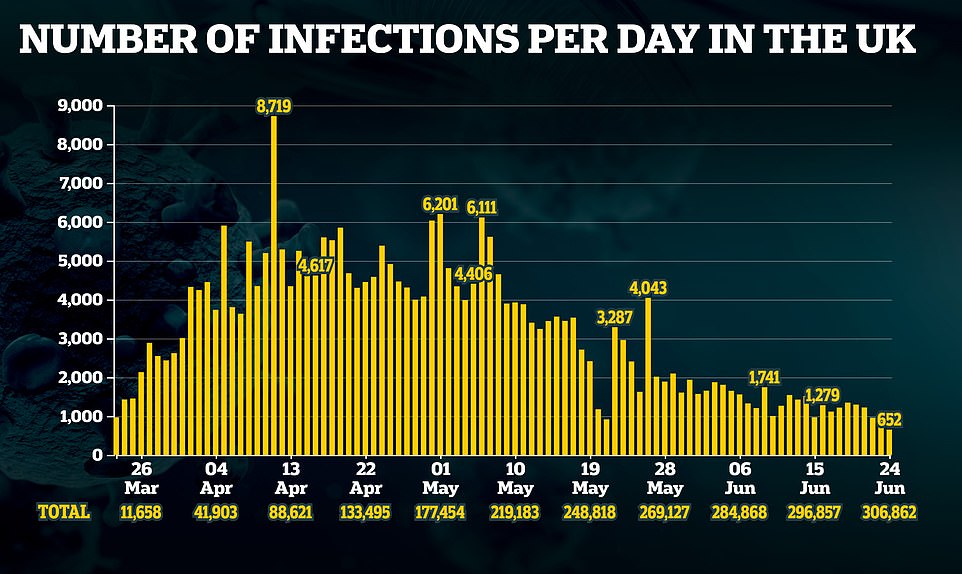 Department of Health data released yesterday showed 232,086 tests were carried out or posted the day before — the second-highest daily figure. The number includes antibody tests for frontline NHS and care workers.

But bosses again refused to say how many people were tested, meaning the exact number of Brits who have been swabbed for the SARS-CoV-2 virus has been a mystery for a month — since May 22.

Health chiefs also reported 653 more cases of Covid-19, the fewest recorded in any day since before lockdown was imposed. Just 643 people tested positive for the life-threatening virus on Thursday, March 19.

The daily death data does not represent how many Covid-19 patients died within the last 24 hours — it is only how many fatalities have been reported and registered with the authorities.

The data does not always match updates provided by the home nations. For example, the Scottish government last Thursday announced two deaths – but the DH recorded nine north of the border.

Department of Health officials work off a different time cut-off, meaning daily updates from Scotland as well as Northern Ireland are always out of sync. Wales is not thought to be affected.

And the count announced by NHS England every afternoon — which only takes into account deaths in hospitals — does not match up with the DH figures because they work off a different recording system.

For instance, some deaths announced by NHS England bosses will have already been counted by the Department of Health, which records fatalities ‘as soon as they are available’. 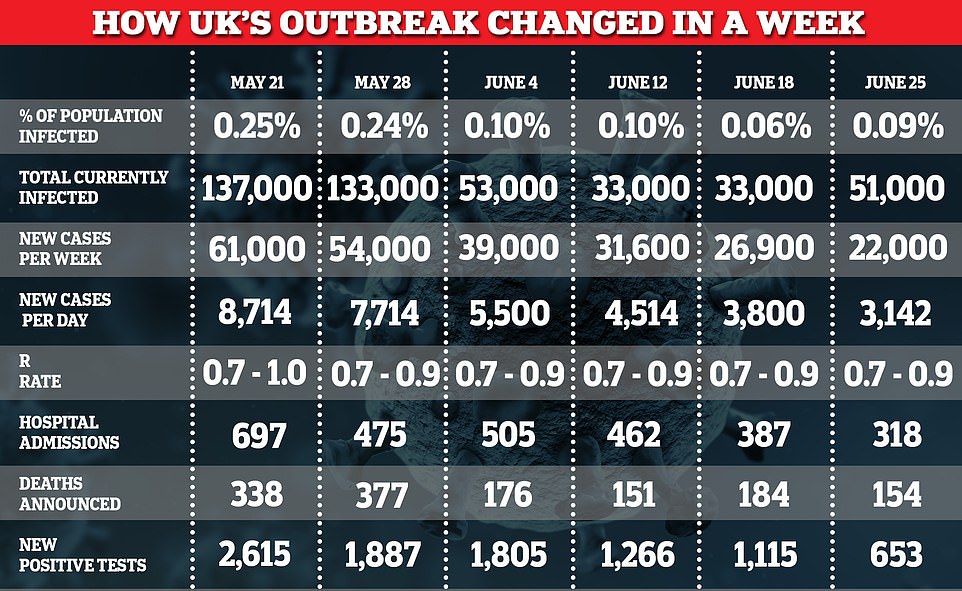 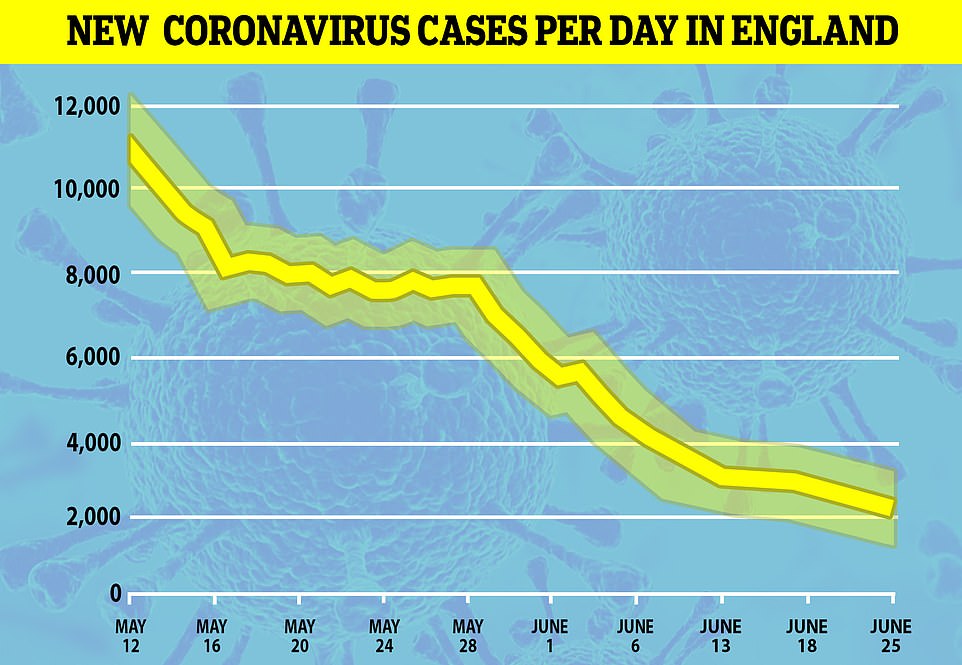 King’s College London ‘s COVID Symptom Tracker app estimates that just 2,341 Britons are being struck down with the coronavirus every day. Last week they used this data to estimate that there were 3,612 people catching the virus every day in Britain and roughly 4,942 people the week before that. The figure was higher than 11,000 per day a month ago 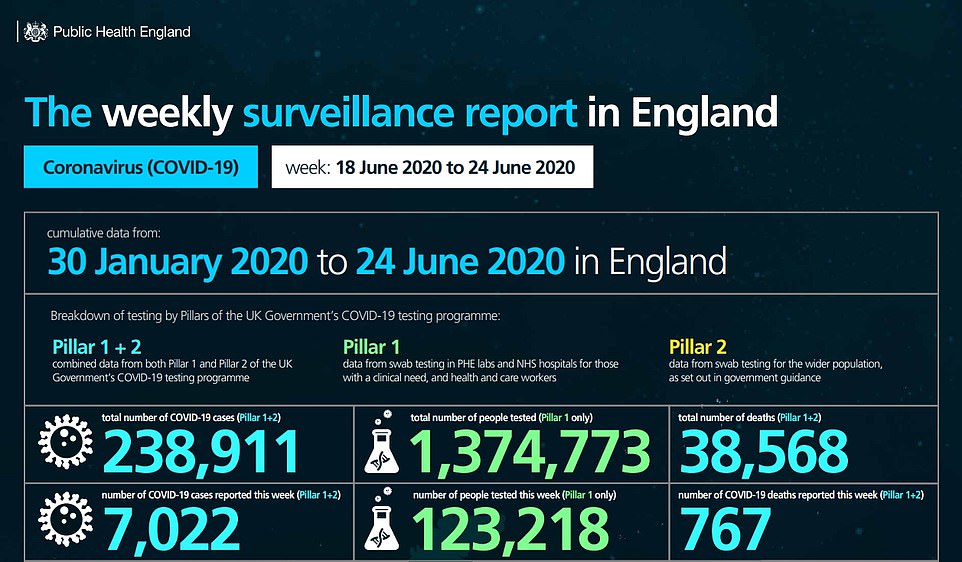 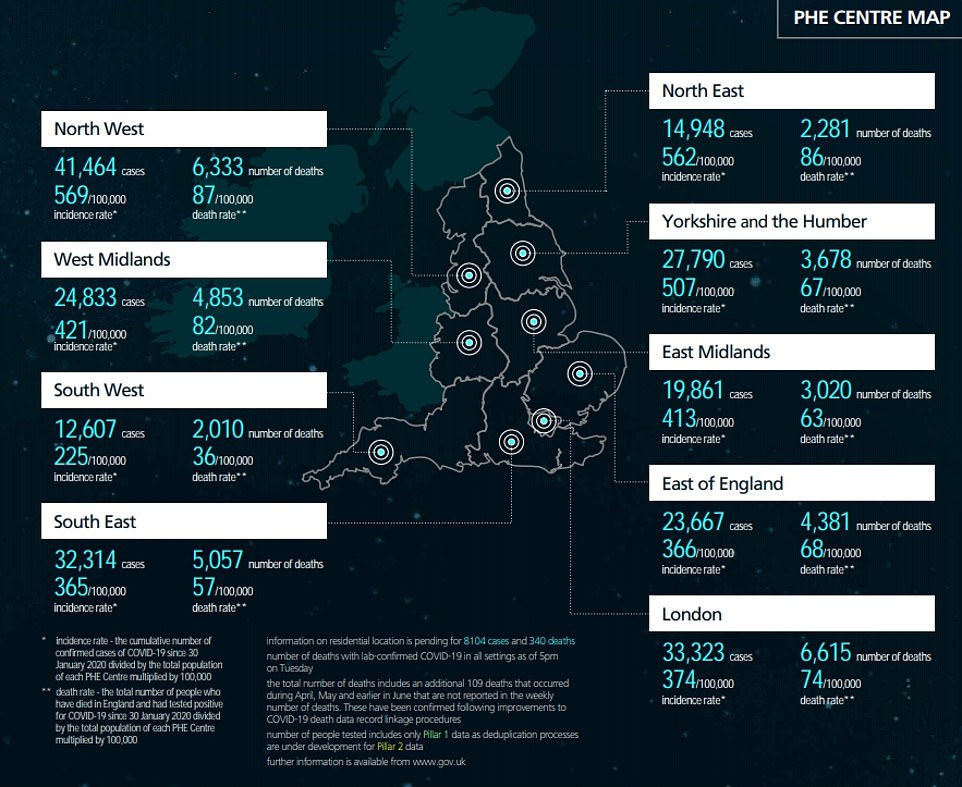 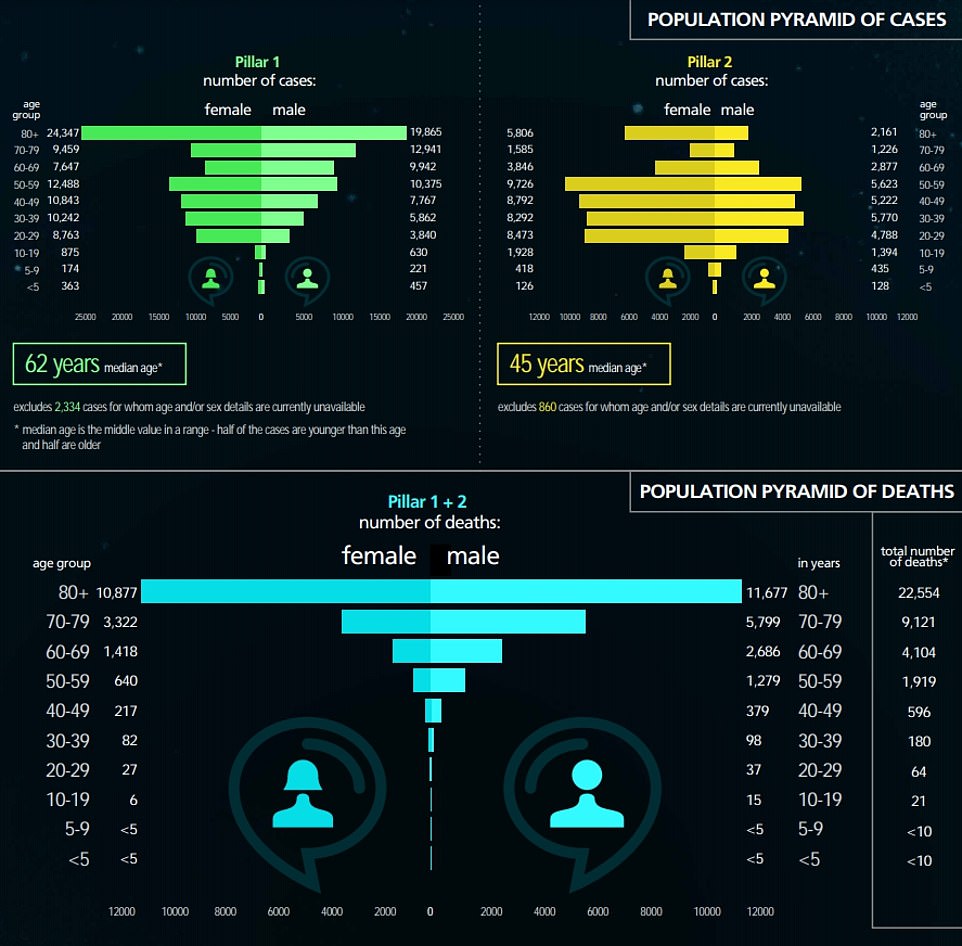 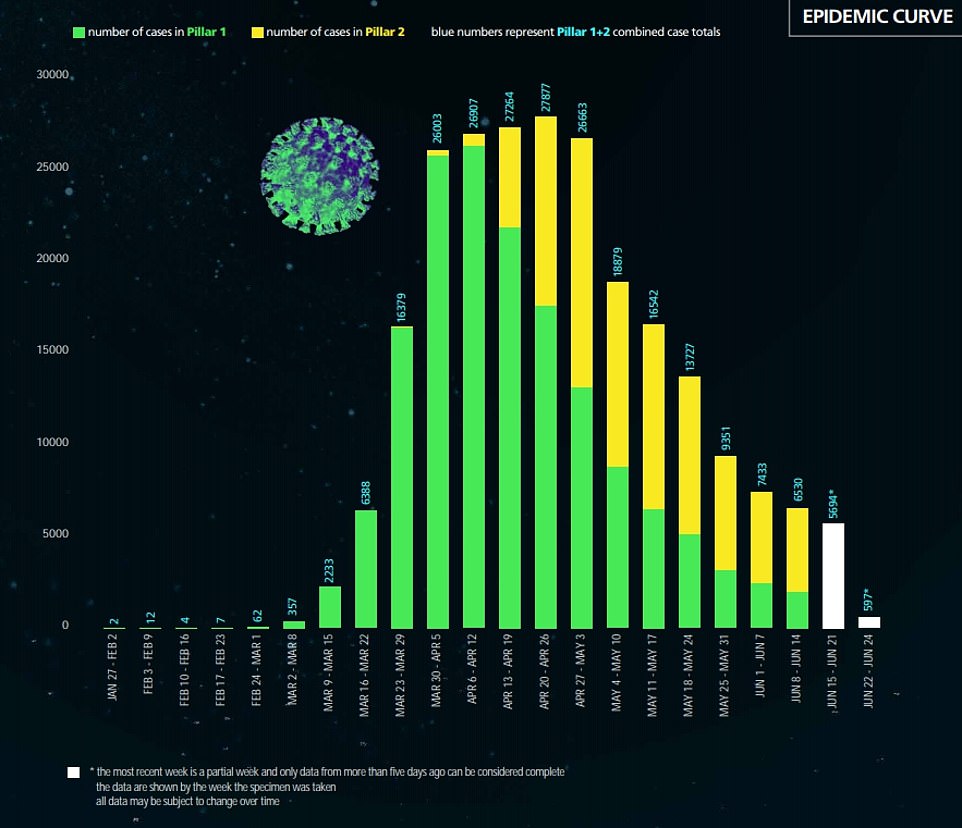 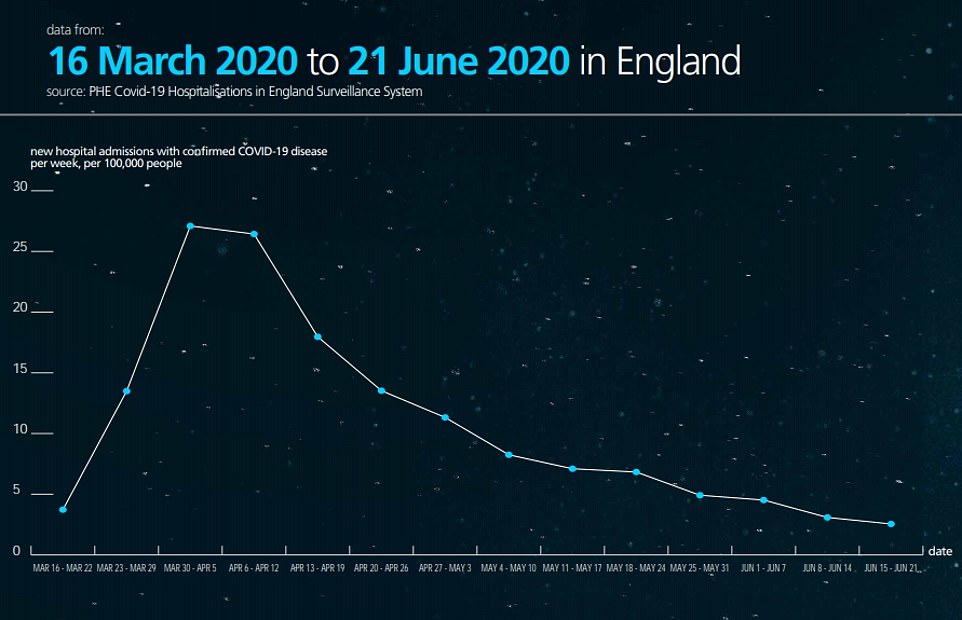 HOW MANY PEOPLE HAVE REALLY DIED OF THE CORONAVIRUS?

Department of Health’s latest death count for all settings stands at 43,081.

The daily data does not represent how many Covid-19 patients died within the last 24 hours — it is only how many fatalities have been reported and registered with the authorities.

It also only takes into account patients who tested positive for the virus, as opposed to deaths suspected to be down to the coronavirus.

Data compiled by the statistical bodies of each of the home nations show 53,785 people died of either confirmed or suspected Covid-19 across the UK by the end of May.

The Office for National Statistics yesterday confirmed that 48,866 people in England and Wales died with confirmed or suspected Covid-19 by June 12.

National Records Scotland — which collects statistics north of the border — said 4,117 people had died across the country by June 14.

Their tallies are always 10 days behind the Department of Health (DH) because they wait until as many fatalities as possible for each date have been counted, to avoid having to revise their statistics.

The total number of excess deaths has now passed 65,000.

Excess deaths are considered to be an accurate measure of the number of people killed by the pandemic because they include a broader spectrum of victims.

As well as including people who may have died with Covid-19 without ever being tested, the data also shows how many more people died because their medical treatment was postponed, for example, or who didn’t or couldn’t get to hospital when they were seriously ill.