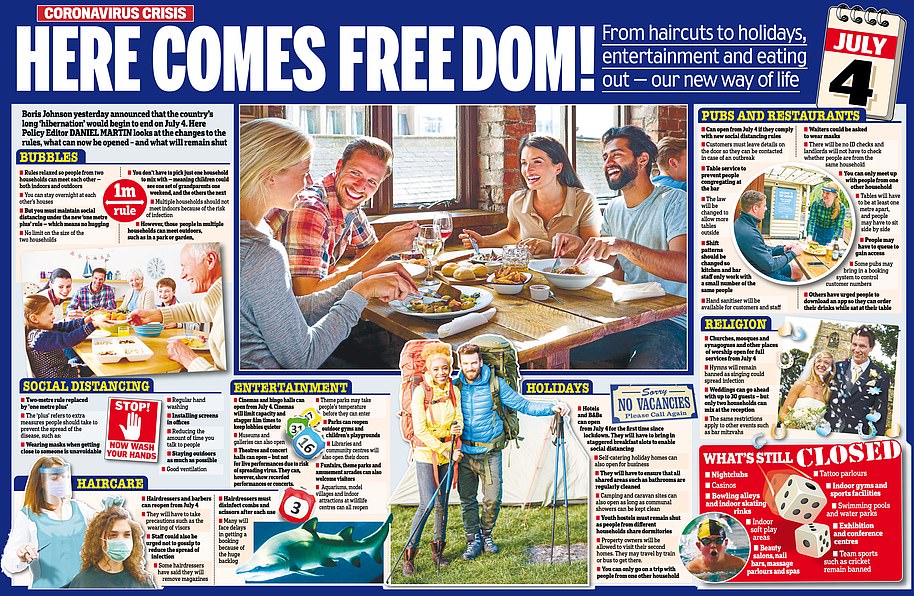 The Prime Minister has announced a series of changes to the lockdown in England from July 4.

Here is how the alterations will affect people’s lives:

Do we have to keep to being two metres apart?

No. For people not from the same household it is now ‘one metre-plus’. The ‘plus’ element is what the PM called mitigation – wearing a mask, regularly washing hands, sitting side-by-side rather than face-to-face – if a two-metre distance cannot be kept to.

What other big changes were announced?

As well as reducing the social distancing requirement, Mr Johnson said two households would be able to start meeting indoors so long as the ‘one metre-plus’ rule is observed.

The household you choose to meet up with does not have to be exclusive, unlike in the ‘social bubbles’ announced recently to help ease loneliness.

It means a family could see one set of grandparents on one weekend and see the other on the following weekend, said the PM.

Can we finally hug our relatives?

If you do not live in the same household, the answer to that is still no.

Two households meeting for dinner can sit at the same table but still must not touch and should attempt to uphold the ‘one metre-plus’ rules.

Can we go anywhere else with another household?

It is a resounding ‘yes’ on this front.

Mr Johnson told MPs that restaurants, pubs and ‘self-contained accommodation’ including hotels, B&Bs and campsites can soon reopen, as long as Government guidelines on how to lower the risk of coronavirus transmission are followed.

So can we go on a trip or to the pub with friends in England?

As long as those friends are from only one other household, then you can take a ‘staycation’ trip together or go for a pint.

There will be no hanging out at the bar, first of all, with table service being encouraged to reduce the amount of interaction on shared surfaces.

Restaurant, pub and bar managers will also be asked to take customers’ contact details so that, in the event of a local Covid-19 outbreak, they can be traced by the NHS and advised to self-isolate.

While a trip to the pub is back on the cards, clinking glasses with a large group of friends inside is not.

While there is no limit on the size of the two households visiting the watering hole together, more people cannot join in the socialising in a bid to limit the chain of virus transmission.

What else can reopen from July 4?

The PM read out a lengthy list in the Commons of venues and attractions that can now benefit from the lockdown easing.

Places of worship will be able to hold services once again, with weddings back on but numbers capped at 30.

Theatres and concert halls will be allowed to open but will be banned from playing live performances.

Hairdressers and barbers can operate while using use face visors.

And what will remain shut?

Venues where there is ‘close proximity’ interaction will not be permitted to open their doors yet, the PM said.

Instead taskforces will work to ensure such businesses can ‘reopen as soon as possible’.

Are there any changes to meeting up outside?

Outside restrictions remain largely the same, except that the two households now permitted to meet inside are welcome to do the same at the park, with no limit on the size of their gathering.

Groups not from the same household meeting up outside continue to be restricted to a maximum of six.

Should we continue to work from home?

While the Government has not talked up ending the working from home routine that thousands of office staff have adopted since March, the list of steps that could be taken to reduce virus transmission risk might encourage employers to start calling workers back in.

Mr Johnson said ‘reducing the number of people in enclosed spaces, improving ventilation, using protective screens and face coverings’ could all be deployed, on top of keeping a metre away from each other. He also suggested shift patterns could be changed so staff work in set teams.

Is this the end of lockdown, then?

Not fully. There are still restrictions in place but it is a significant easing and the new measures will allow people to socialise more than they have in months.

But the PM warned that local lockdowns, and even a clampdown affecting the whole country, could still be required if major Covid outbreaks occur.

Are these changes being brought in for Scotland, Wales and Northern Ireland?

The devolved administrations ‘hold responsibility for their own lockdown restrictions’, Mr Johnson said on Tuesday, and would proceed ‘on their own judgment’.

Following the PM’s announcement, Scotland’s First Minister Nicola Sturgeon told reporters the two-metre rule on social distancing would remain in place but that the Scottish Government had asked its scientific advisory group to review the measure.

In Northern Ireland, up to six people as of Tuesday are able to meet indoors in what the executive called a ‘milestone’ for the region’s recovery.

Wales allowed shops and places of worship to open this week, along with the housing market, but First Minister Mark Drakeford has said his administration will not end its five-mile restriction on travel and allow holidaymakers to return until next month.