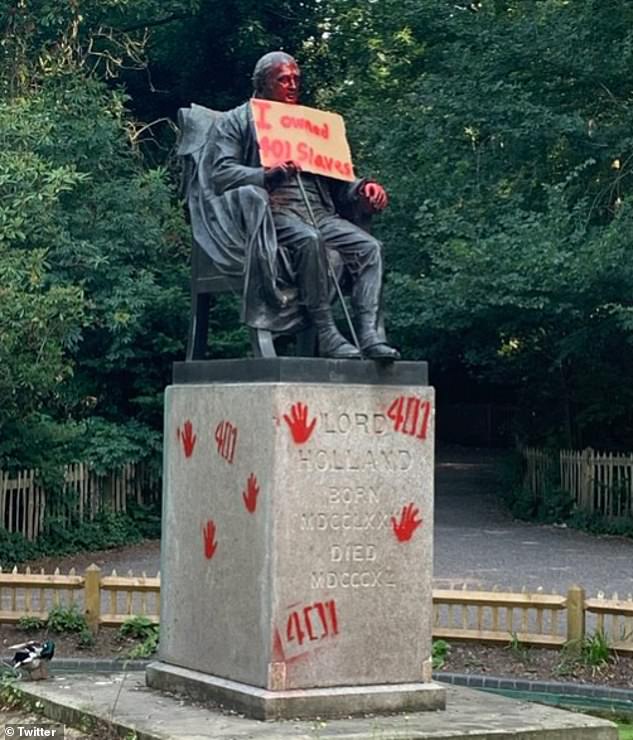 Holland Park could be renamed after the statute of a slave-owning politician who fought to abolish the trade was vandalised with red paint.

The wealthy neighbourhood in west London was named after influential courtier Henry Rich, the first Earl of Holland, whose family gathered income from the slave trade.

But the moniker, which was also given to a Kensington park and an underground station, could be reviewed after a statue of his descendant was vandalised amid the Black Lives Matter protests.

A monument to 19th-century politician Henry Vassall-Fox, the third Baron Holland, was left splattered with red paint within the picturesque park on Wednesday.

A cardboard sign reading ‘I owned 401 slaves’ was perched in the bronze statue’s arms, with the number painted on the plinth alongside red handprints.

A monument to Lord Holland, which sits in Holland Park, west London, has been splattered with red paint, and a cardboard sign in perched on his arms saying ‘I owned 401 slaves’

The number relates to the dozens of plantations Lord Holland owned in Jamaica through his wife Elizabeth Vassall’s family.

But Lord Holland had consistently opposed the trade and was part of the 1807 government which pushed through the first Slave Trade Act.

The Royal Borough of Kensington and Chelsea has suggested the statue could be placed under review as part of a ‘conversation about the figures we see in our public realm’, the Telegraph reported.

The neighbourhood could also be investigated for links to slavery, alongside the park, Tube station and electoral ward as part of Sadiq Khan’s London-wide public realm review.

A spokesman for Kensington and Chelsea Council said: ‘In London we must oppose racism in all its forms and we fully support everyone’s right to protest peacefully.

‘The Mayor of London has launched his London-wide public realm review and we expect this to consider station names, statues and street names. 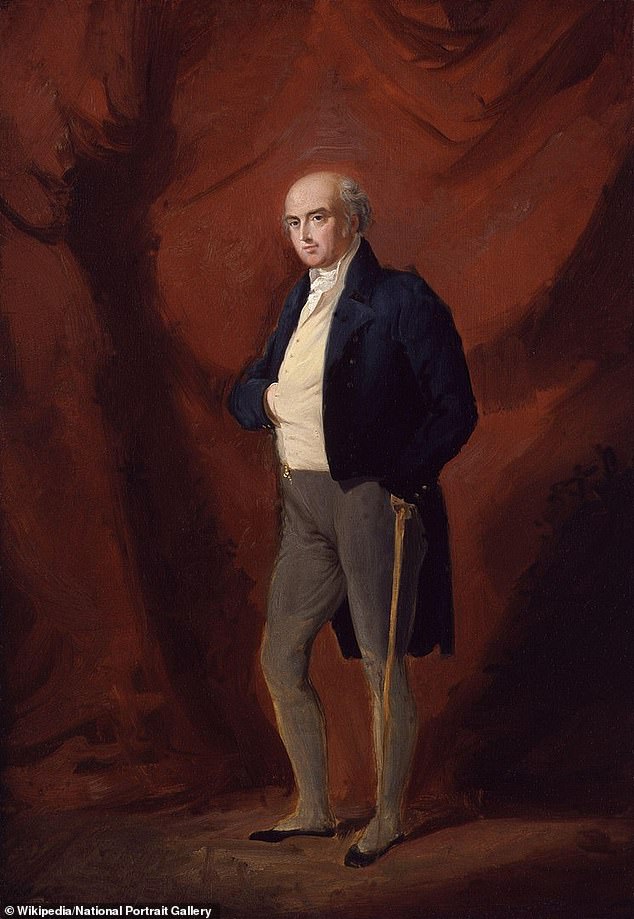 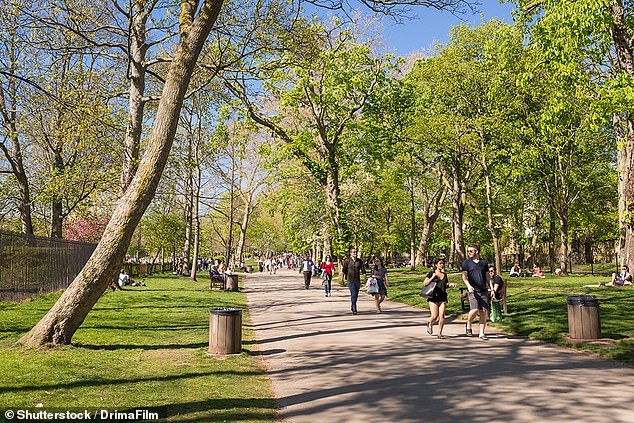 A spokesman for Kensington and Chelsea Council said: ‘In London we must oppose racism in all its forms and we fully support everyone’s right to protest peacefully’ (Pictured: Holland Park)

‘Any decisions will need to take into account the views of local people and we are absolutely committed to representing the views of residents in our diverse communities in Kensington and Chelsea.’

The Legacies of British Slave Ownership, a project by UCL, shows Lord Holland was given payment following the Slave Compensation Act 1837.

The UK emancipated enslaved people in 1833, but then raised the equivalent of £17billion in compensation money, and awarded it to slave owners such as Lord Holland.

Who was Lord Holland?

The slave owner was born on November 21, 1773, in Wilshire and became a major force in politics during the 19th century.

He was the son of Stephen Fox, second Baron of Holland and Lady Fitzpatrick.

Holland inherited the Barony at the tender age of one in 1774 after his father died, and his mother passed away just a few years later on his fifth birthday.

As a teenager he studied at Eton before going to university at Oxford.

Holland married Elizabeth Vassall on July 6 1797 and they had two sons and two daughters.

Despite owning a number of plantations in Jamaica through his wife, Lord Holland was against the slave trade.

Lord Holland died on October 22, 1840, after a short illness at his home, Holland House.

He was buried on 28 October in Millbrook Church, near Ampthill, Bedfordshire.

Prior to the 2008 financial crash It was the largest state-sponsored pay-out in British history. Lord Holland was associated with three claims in total, and received a £7,211 payment.

Vassall-Fox came to own the slaves through his marriage to Elizabeth Vassall after the death of her former husband in 1800.

After his demise Lord Holland was said to have adopted the name Vassall in 1800 ‘to safeguard his children’s rights to his wife’s West Indian fortune’.

It said: ‘By the unexpected death of his wife’s first husband in 1800, Holland found himself the reluctant, but effectual proprietor of the Vassall plantations in Jamaica.

‘This placed him in a moral and political dilemma which confused his thinking.’

The piece – which appears in Volume I, 1980, of the Slavery and Abolition Journal – adds that he ‘abhorred the slave trade’ but when challenged on it he justified the existence of slavery in terms of the right to property.

It is not clear at this stage if any specific group was responsible for vandalising the statue.

It comes amid a nationwide discussion of Britain’s imperial past prompted by the killing of George Floyd by US police officers.

Mr Floyd’s death has sparked worldwide protests with millions of people taking to the streets. It has also prompted debate about the background of people who have monuments that sit in public spaces throughout the UK.

On Tuesday workers in Plymouth found ‘Nazi’ had been scrawled across a statue to Nancy Astor – the first woman MP to take her seat in the Houses of Parliament.

The statue, which was unveiled last November by former Prime Minister Theresa May, has been boarded up today to hide the graffiti.

Critics say she was regarded as having anti-catholic and anti-semitic views, and some claim she may have been a Nazi sympathiser.

The word ‘Nazi’ was written on her plinth and the Antifascist Circle, a political symbol associated with the Social Democratic Party of Germany in the 1930s, was also scrawled on the monument. 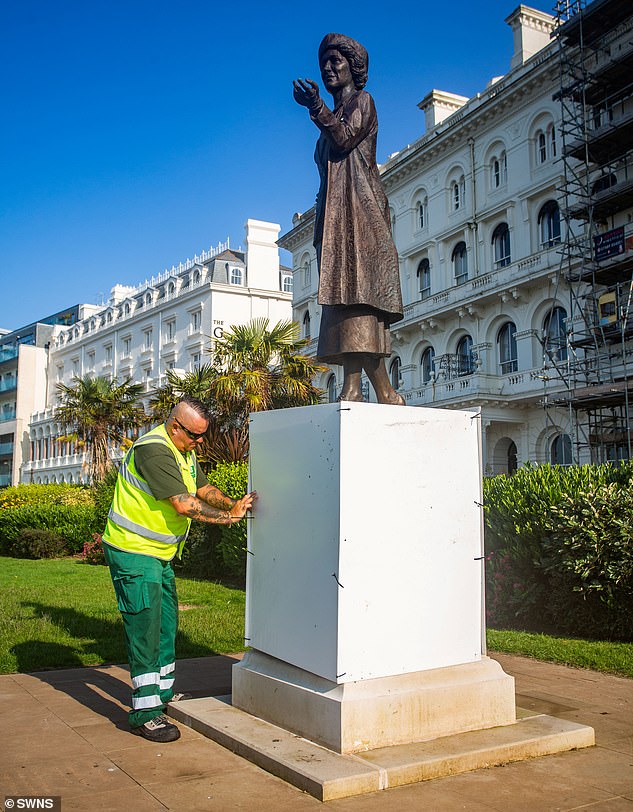 The Nancy Astor statue at the Plymouth Hoe has been boarded up after vandals painted the word ‘Nazi’ on the monument. The graffiti was discovered on Tuesday 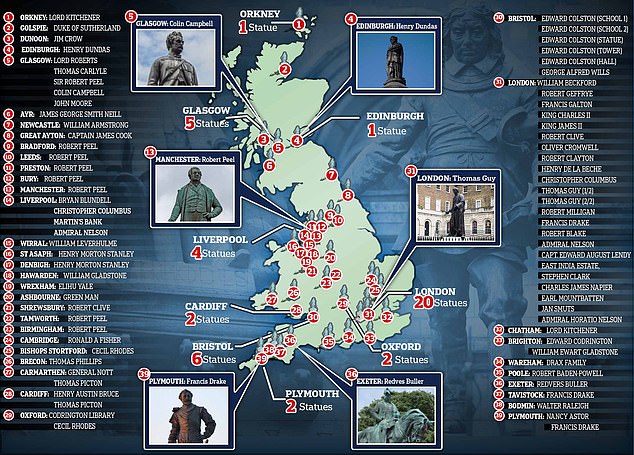 Workers from Plymouth City Council arrived this morning to board up the statue to prevent further damage ahead of its clean-up.

The statue was paid for by a crowd-funding campaign and unveiled in November last year.

The statue of Lord Holland is not on the list compiled by a website called ‘Topple The Racists’ which was created in the wake of the Black Live Matter movement.

It has identified dozens of landmarks from Sir Walter Raleigh Gilbert’s Bodmin Beacon to Lord Kitchener’s memorial in the Orkney Islands that they say need to be removed ‘so that Britain can finally face the truth about its past’.

Organisers have said they were inspired by the ‘direct action taken by Bristolians’, referring to the tearing down of slave trader Edward Colston’s statue on earlier this month, before it was thrown into the harbour.