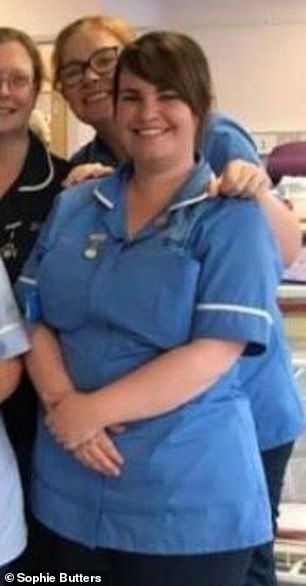 A nurse who lost an impressive three stone during lockdown has revealed how working on the frontline gave her the drive to finally stick to a diet, because she  feared being overweight could put her in grave danger if she caught coronavirus.

As a constant yo-yo dieter, Sophie had pledged a week before quarantine to drop the three stone she’d gained since her 2016 wedding.

But the frontline NHS worker never would’ve guessed that seeing the first-hand effects of coronavirus would be the wake-up call she needed to adopt a healthier lifestyle. 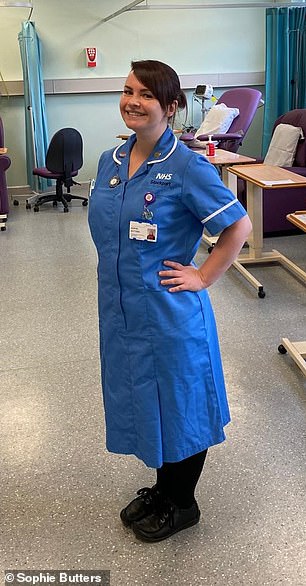 Cancer nurse Sophie Butters, 33, from Stockport, weighed 14 stone 8lbs and was a size 18 just three months ago (left). Sher now cuts a svelte 11 stone 8lbs figure and wears a size 14, after the seriousness of the coronavirus crisis prompted her to finally stick to a diet (right) 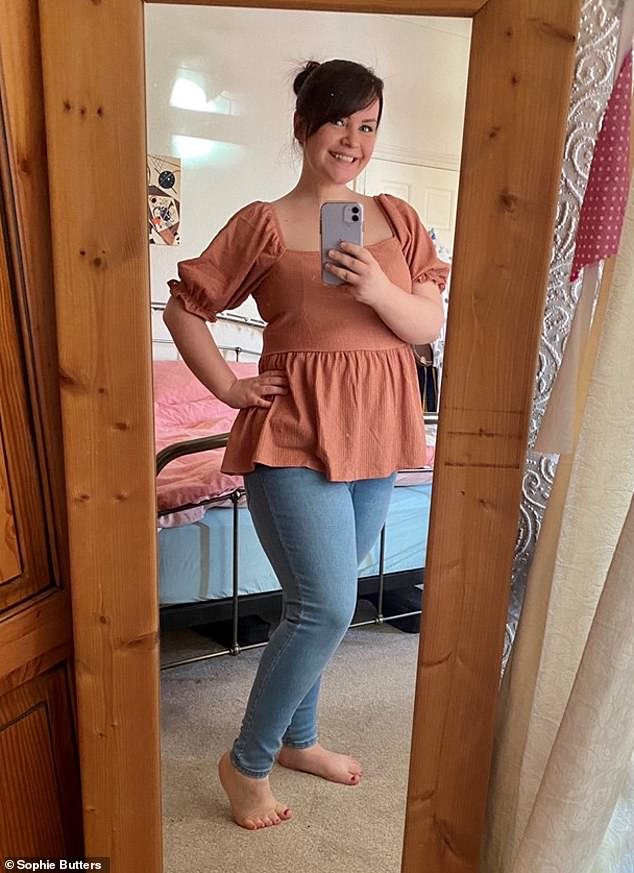 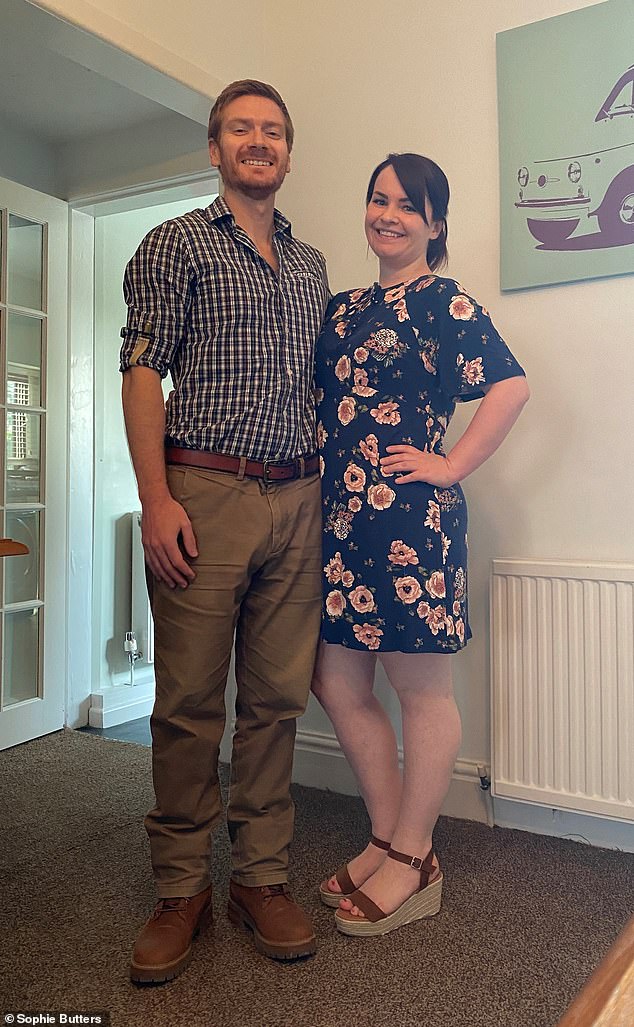 As a constant yo-yo dieter, Sophie (pictured with her husband) had pledged a week before quarantine to drop the three stone she’d gained since her 2016 wedding

Sophie said: ‘I’ve basically always been a yoyo dieter, but never really had the focus or drive to actually stick to a diet and keep the weight off.

‘Working as a nurse in a cancer ward you’d think I’d want to set an example, but with an almost constant supply of cakes given to us by patients and their families, along with working too hard to really think about what I was eating, meant I was always fighting a losing battle.’

But once the pandemic began, Sophie was asked to help on the wards for coronavirus patients and said it made her realise she wanted to make a permanent change.

‘Seeing first-hand what was happening, how serious this was, really helped me focus on cherishing my own health,’ she explained. 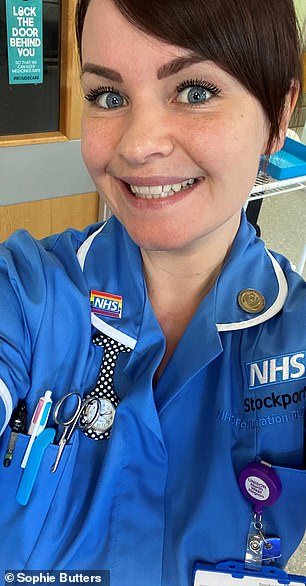 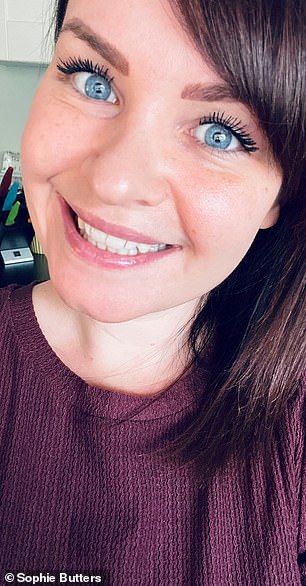 The frontline NHS worker (pictured after her weight loss) never would’ve guessed that seeing the first-hand effects of coronavirus would be the wake-up call she needed to adopt a healthier lifestyle. Sophie said that since starting her diet, she’s found new energy and bounces out of bed every morning 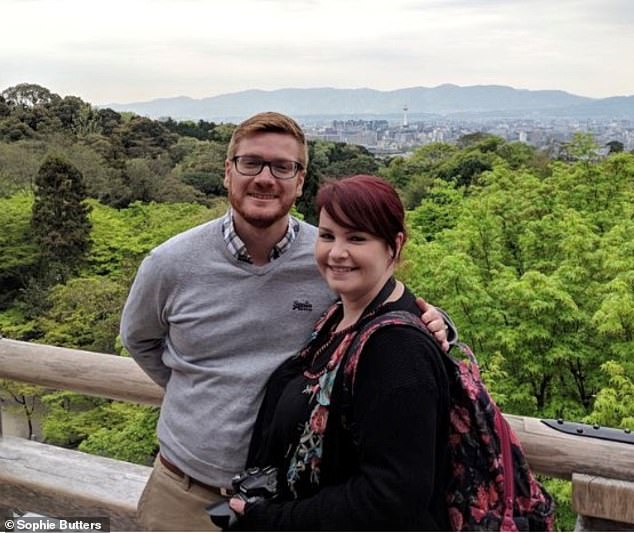 Sophie and her husband Tim had both put on weight since their wedding three years ago, indulging regularly in takeaways on the sofa, followed by ice cream and crisps

‘And as the weeks rolled on and news of Prime Minister Boris Johnson suffering badly with coronavirus because – in his own words – he was overweight really was a wake-up call.

Sophie’s diet before and after her weight loss

Evening – Stir fry or grilled veg. Haven’t had a drink for 3-4 weeks now

‘Once it became clear how serious the whole coronavirus situation was, it actually gave me the focus I needed to stick at my diet, once and for all.’

Sophie started the Cambridge 1-2-1 weight plan with her husband, Tim, since the pair had each put on a couple of stone during their married life – after overindulging on ‘regular takeaways and lots of socialising and drinking’.

‘Before, I’d start each day with buttered crumpets with colleagues,’ Sophie said. ‘Then pizza and chips from the canteen, tucking into a Chinese takeaway with Tim when I got home – always followed by ice cream and crisps on the sofa.

‘And we’d love going out for drinks and meals when we could too, which obviously wasn’t an option anymore.

‘The Cambridge 1-2-1 weight plan replaced some meals with bars or shakes, but also focused on low-carb healthy options.

‘So, I’d have a breakfast bar, a wholemeal sandwich with tuna and spinach for lunch, one of the Cambridge shakes mid-afternoon and then a low-fat stir fry for dinner.’

Sophie added: ‘All my colleagues were so supportive when I told them I was dieting, so I wouldn’t be tucking into the pile of cakes and biscuits left on the nurses’ desk.

‘It was obviously a strange and rather disconcerting time for everyone then, and my diet really helped me stay positive and focused, that I shouldn’t languish in self-pity, but use this time as an opportunity to change.’

WHAT IS THE EVIDENCE THAT OBESITY IS A RISK FACTOR FOR COVID-19?

There have been no studies which clearly mark the largest risk factors for COVID-19 – the disease caused by SARS-CoV-2.

But, using data from hospitals, researchers are able to identify which conditions are common among those who are frequently in hospital with the disease.

One study in New York City, the world’s coronavirus hotspot, found obese people were more likely to be hospitalised with the coronavirus than cancer or lung disease patients who have compromised immune systems.

The ‘surprising’ findings also showed that even smoking wasn’t a predictor of hospitalisation like obesity was, despite the habit being bad for the lungs.

The researchers at the NYU Grossman School of Medicine, who analysed hospital reports of 4,103 COVID-19 positive patients, found is that ‘in the decision tree for admission, the most important features were being over 65 and obesity.’

Researchers at New York University recently highlighted obesity as a main driver of patients under the age of 60 needing hospital care.

They looked at the records of 3,615 patients who tested positive between March 4 and April 4.

This likelihood increased to 3.6 times in those patients with a BMI of 35 or greater, according to the findings published in Clinical Infectious Diseases.

In patients over 60 years, the researchers didn’t find a significant link between obesity and severe illness that needed critical care.

One study by US health officials, which recorded the weights of 178 patients, found obesity was the most common underlying condition for patients aged under 65 who were admitted to hospital for COVID-19.

Of those aged between 18 and 49 who had a health condition, obesity accounted for 60 per cent. The second most common condition was asthma, at 27 per cent.

For those between 50 and 64 years of age with an underlying health problem, obesity accounted for 49 per cent – more than the 47 per cent who had high blood pressure.

Comparatively, according to data from the UK’s National Health and Nutrition Examination Survey, age-adjusted obesity prevalence is 42 per cent.

In the UK, according to data from hospitals, almost 75 per cent of COVID-19 patients in intensive care are overweight, compared with 65 per cent in the general population.

And NHS data last week revealed obesity raises the risk of dying from coronavirus in hospital by nearly 40 per cent.

The analysis of 17,000 COVID-19 admissions found death rates were 37 per cent higher among obese patients, second only to dementia (39 per cent) but more than heart disease (31 per cent).

The research was conducted by a team of Britain’s top infectious diseases scientists who are part of the pandemic-planning global body.

Sophie and Tim – who was working from home during the lockdown and has lost two stone – also started doing virtual PT sessions together, with the weight then quickly dropping off.

Admitting she’s now got a lot more energy, Sophie said: ‘I’m going for long walks in the evenings and at weekends and literally bouncing out of bed in the mornings in a way I can’t remember ever doing before.

‘We haven’t seen any friends of family since lockdown and can’t wait to present the new “us” to the world in person soon.

‘It’s crazy to think how quickly so much has changed in the world outside, but also for us, how we’re fitter, healthier, slimmer than we could’ve ever imagined.’ 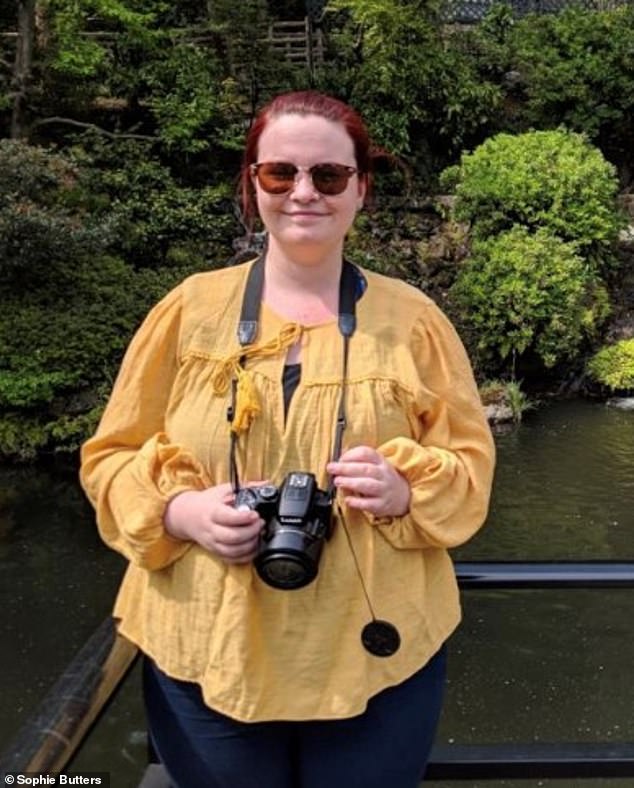 The cancer nurse admitted she was a yo-yo dieter, and never found the motivation to stick to a healthy eating plan 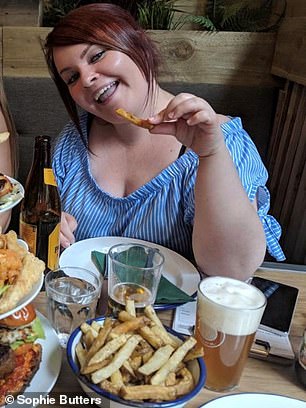 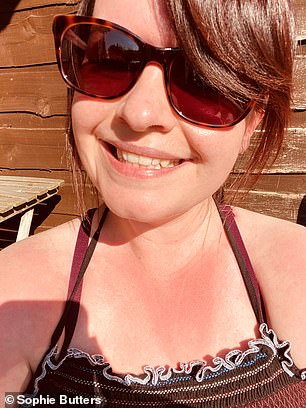 Sophie (pictured right, after her weight loss, and before, left) and Tim – who was working from home during the lockdown and has lost two stone – also started doing virtual PT sessions together, with the weight then quickly dropping off