A leading figure in the education sector is worried that Year 11 pupils in the UK are being neglected when they should be receiving urgent help.

David Hughes, chief executive of the Association of Colleges, said that he is most worried about this age group in terms of catching up from lost time caused by the coronavirus pandemic.

Year 11s, who are set to start college or sixth form in September, were not included in the £1billion package provided for the Government to help pupils catch-up in their education.

Association of Colleges chief executive David Hughes is most worried about Year 11 pupils, who would normally be taking GCSE examinations this summer, when pupils return to school after the coronavirus lockdown

‘And we’re not in the best of times. They will have had six months without any support. So they absolutely need extra support in the autumn otherwise they’re going to be a long way behind.

‘They won’t be able to achieve the qualifications they are [seeking] so it’s indefensible that that that group hasn’t been supported yet.’

Pupils in Year 11 normally stop receiving teaching in April, a few weeks before their GCSE assessments start, but the pandemic has led to the cancellation of all examinations meaning this age group will not have faced mandatory study in nearly six months come September.

Meanwhile, Year 11 pupils’ GCSE grades will be determined by predictions provided by their school and teachers.

And when this age group enters college or sixth form at Year 12 stage, they will be looking ahead to A-Level preparation. 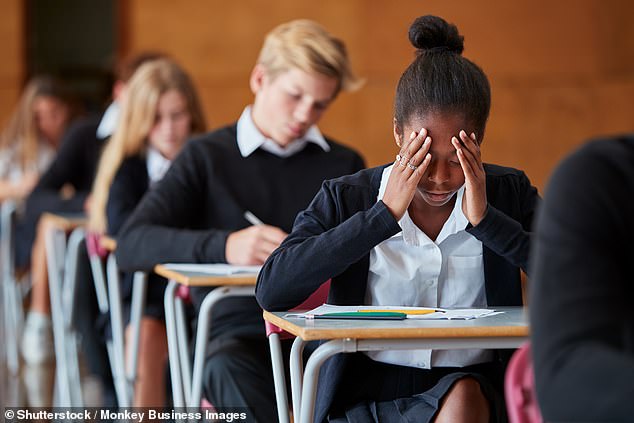 Because GCSE teaching normally finishes in April, the Year 11 pupils, who will become Year 12 pupils looking ahead to A-Level preparation, will not have faced mandatory study in nearly six months

However, all GCSE pupils who fail their English and maths ‘exams’ need to retake them until they pass, with these resits planned for the autumn.

Mr Hughes added that the Association of Colleges has asked for more funding to help children who have felt neglected by their school or need added assistance in continuing their education in these testing times.

He added: ‘We’ve asked for £200 million, which will be a pupil premium-type upgrade for funding for those students who need it most, disadvantaged students, getting the extra support in the autumn to catch up after six months of probably some neglect.’