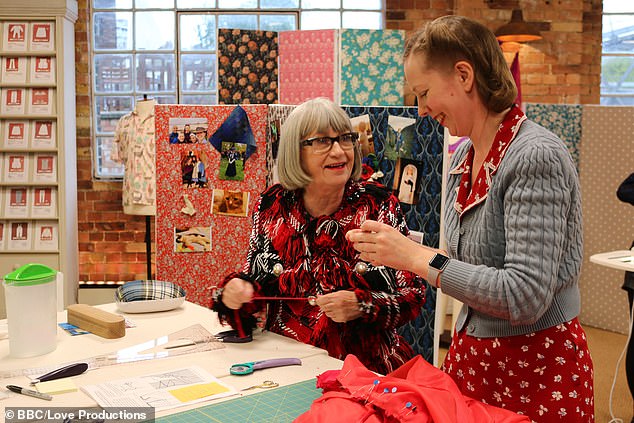 Every Wednesday evening for the past ten weeks, I have religiously phoned my 91-year-old mother to remind her that our favourite programme is on.

She then writes a note telling herself to be in front of the TV screen at 9pm sharp.

Like five million viewers nationwide, we were utterly hooked on The Great British Sewing Bee (GBSB).

While most folk have been binge-watching Netflix or Amazon Prime shows during lockdown, there have been a small number of rather unlikely terrestrial TV programmes that have kept some of us going.

My mother’s other favourites are the ITV crime drama Vera, set in Northumberland, and The Repair Shop on BBC1, in which expert craftsmen and women repair treasured antiques and heirlooms. But we agree that GBSB is by far the best.

Jenny Eclair who has been watching The Great British Sewing Bee throughout lockdown, explained how the series  hooked the nation. Pictured: Sewing Bee champ Clare with judge Esme Young

I’m gutted that it’s over, and will really miss it in the weeks to come.

For the uninitiated, some background. GBSB first aired on the BBC in 2013, with a similar format to The Great British Bake Off. Each episode features three sewing challenges with a specific theme.

In the pattern challenge, every contestant is given the same sewing pattern and must follow the instructions exactly.

Next is the transformation challenge, in which the sewers are given secondhand clothes to up-cycle into a brand new outfit.

In the final challenge, the contestants have to create a made-to-measure outfit for a real-life model.

In this series, they turned their hands to a tea dress, a boned basque, a 1980s cocktail dress, a tennis outfit and a bomber jacket. They transformed kids’ sleeping bags into food-themed fancy dress and grandma-style nighties into party frocks. Of course, no talent show is complete without legendary judges. There’s Patrick Grant, the suave, 48-year-old Scottish designer and director of bespoke tailors Norton & Sons of Savile Row, who has a keen eye for sharp lines.

Not only is the man a complete dish, he also has hero credentials, having switched production at his clothing factory in Blackburn, Lancashire, from fashion garments to NHS scrubs.

Then there’s Esme Young, with her trademark blunt bob. She is a lecturer at the famous Central Saint Martins art and design college, whose impressive CV includes designing costumes for Bridget Jones’s Diary.

Who hasn’t enjoyed watching this 71-year-old grande dame of fashion sock it to contestants and viewers with her vast expertise, excellent necklaces and inexhaustible humour? And let’s not forget comedian Joe Lycett, who replaced Claudia Winkleman as presenter in 2019.

As someone who presented a special celebrity episode for charity, I was gutted when Lycett got the call.

However, I’ve managed to swallow the bitter bile of jealousy, and happily watched him host this sixth series. 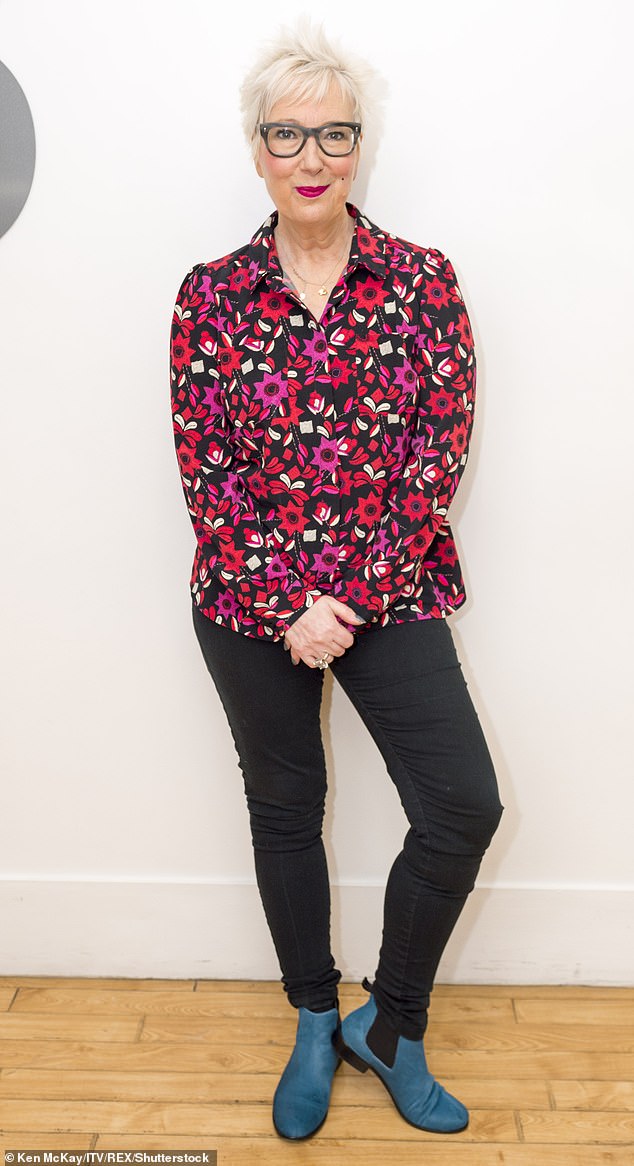 Jenny (pictured) who hasn’t used a sewing machine since she left school in 1978, gushes that the show’s contestants are incredibly skilled

On paper, GBSB should hold very little appeal for yours truly — the title is almost offensively twee, and it’s about sewing! I don’t sew — although I once jazzed up a cardigan by changing all the buttons.

I’ve probably used a sewing machine just once since I left school in 1978, where I spent three terms making a school-regulation kitchen apron — or, more precisely, a blood-stained rag by the time I finished with it. (I’m so ancient we didn’t even have electric sewing machines, just a treadle version.) But all that aside, as with the best of these competitive reality shows, much of the joy derives from the casting.

Somewhere behind the scenes, lots of researchers work hard every year to dig out both the most likely and unlikely wannabes, to make sure the mix is fresh and surprising. Not only are the contestants incredibly skilled, they are all, without exception, extraordinarily pleasant. And that is surely one of the keys to the show’s success. No one on Sewing Bee has ever come across as difficult. There don’t seem to be many divas in the sewing world (as opposed to the fashion world).

No one rips up their garments and stamps on the fabric before flouncing out. I’ve never even heard anyone swear.

It’s the ultimate feel-good television, with nice people from a variety of backgrounds, creating astonishing things in very limited amounts of time. 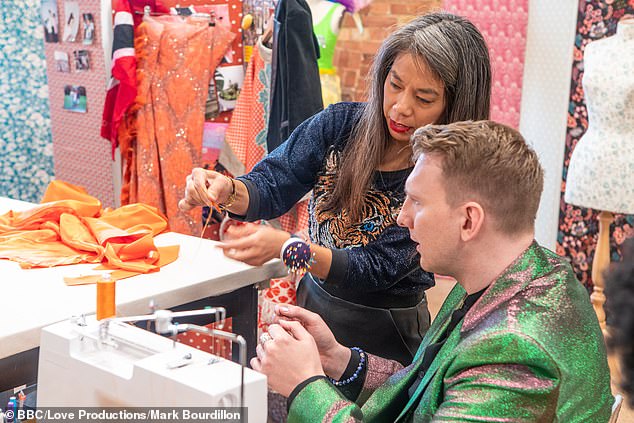 Jenny explained that not having any ambition to make clothes herself, could be a reason why she finds the series so relaxing. Pictured: Nicole and Joe Lycett

Last week’s semi-final saw them recreating that famous white dress Marilyn Monroe wore in 1955 film The Seven Year Itch. You know the one — the pleated number that infamously blew up around her thighs and showed off her marvellous big pants.

They made sci-fi outfits and flapper dresses, too.

Maybe it’s because I don’t have any ambition to make clothes myself that I find this show so absorbing, so relaxing. I know I can’t compete, so I just sit back and revel in watching them in action.

For me, it’s the same with Bake Off. As someone who rarely ventures into the kitchen, I find watching other people make cakes weirdly calming. (That said, I did win Celebrity Bake Off — a fluke result I still doubt daily.)

But I believe that following a recipe is easier than following a pattern, which can end up inside out, upside down or back to front. And during these daunting challenges with the needle, there really is nowhere to hide.

I had no idea how demanding a ‘frill’ could be until I watched GBSB. When I was 14, I forced my mother to make me a long skirt with a frilled hem from a Laura Ashley pattern. After that traumatic experience she put the sewing machine away for ever. Looking back, I really didn’t thank her enough for all her efforts! 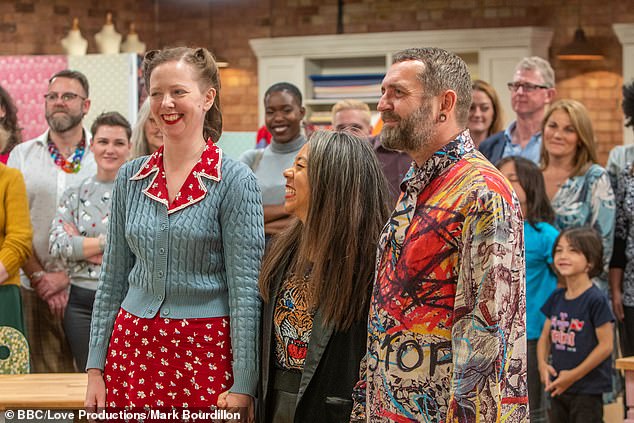 Jenny said lockdown has taught us the value of having hobbies such as sewing. Pictured: GBSB’s Clare, Nicole and Matt

For many years, making your own clothes was considered a bit naff. Why would you bother when the High Street stockpiles cheap high fashion? Homemade items smacked of frumpiness.

Now, though, being able to create and make things — be they clothes, cushions, cakes, candles paintings or pottery — is very much back in fashion. Isn’t it odd how the tables turn?

Lockdown has certainly taught us a few life lessons over the past three months, and one of them is the value of hobbies. (And it’s not just on our screens that people have unleashed their sewing skills. My friend Judith and my next-door neighbour made face masks and ‘scrub bags’ for NHS staff.)

It was, as we now know, medic Clare, with her 1940s librarian vibe (who was taught to sew aged eight by her mother, and who still uses the silver thimble she was given as a Christening present) who triumphed last night. A massive congratulations to her.

But it doesn’t really matter. Her fellow finalists, Matt and Nicole, were wonderful, too, and they all deserve to go on and do exciting things. I wish them the very best of luck.

Meanwhile, roll on series seven. And, in the meantime, why on earth do I keep Googling ‘secondhand sewing machines’…?

Jenny Eclair is a comedian, author and co-host of the Older And Wider podcast.