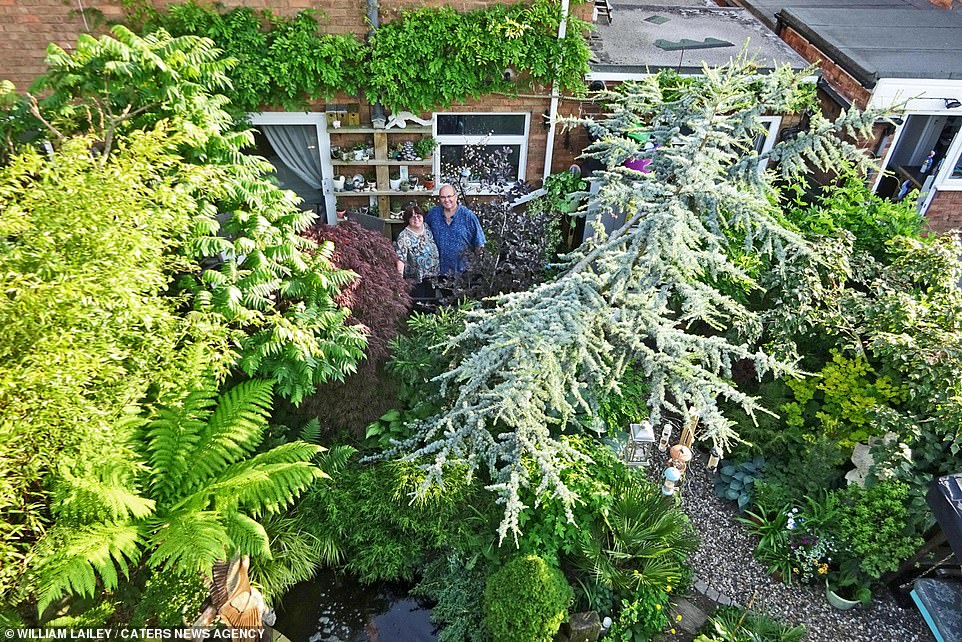 A green-fingered couple have spent the past 12 years transforming the garden of their 1960s semi-detached into a personal Eden.

From the front of Annmarie and Andrew Swift’s home in Walsall, West Midlands, you would not know they had  turned their once boggy lawn into a peaceful corner of nature, complete with plants, a waterfall, ponds and even a mini spa.

Annmarie and Andrew Swift have worked on their garden for more than 12 years to create a small peaceful corner with plants, a waterfall, ponds and a mini spa 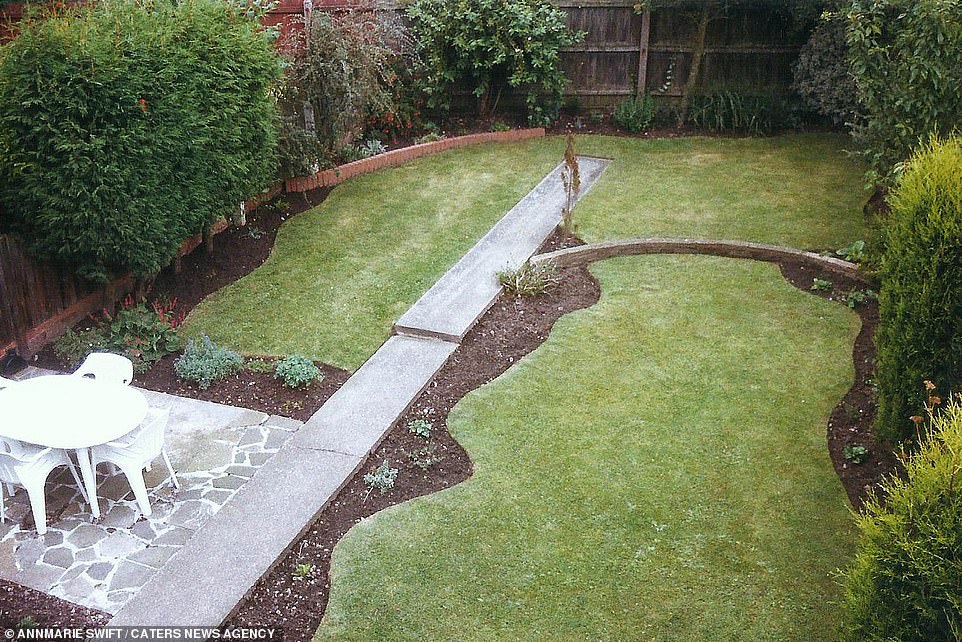 The garden was boggy and plain when Annmarie first moved in 1997, with just a lawn and some plants around the edges 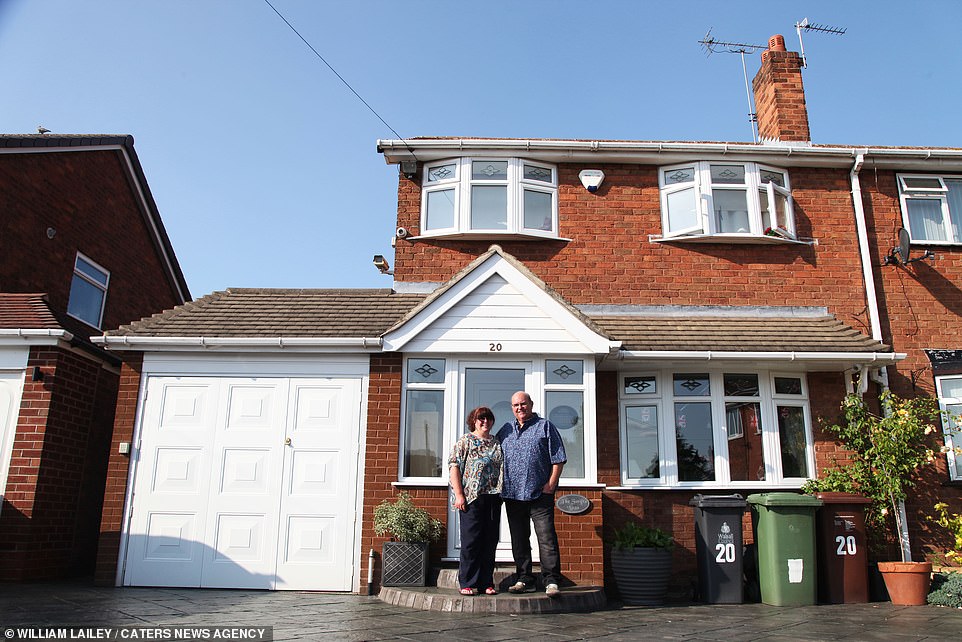 From the front of their house in Walsall, West Midlands, you would not know there is an idyllic garden out the back in which the green-fingered couple spend most of their time

The pair’s initial plan was to create a Japanese style garden but they soon realised they had chosen all sorts of plants, which made their garden more exotic.

The 15m x 11m site consists of a big pond connected by a stream to a smaller pond, with a small waterfall at the end, 50 trees, countless unusual plants such as ferns, bamboos, bananas and yuccas and a hydrotherapy tub.

At the far end of the garden is the Spa House, with its hydrotherapy tub. ‘I’d wanted one for ages, and finally got it a few years ago,’ Annmarie says.

‘It needed a crane to lift it over the house but it was worth it! We can sit in the tub and watch the birds feed and see the waterfall.’ 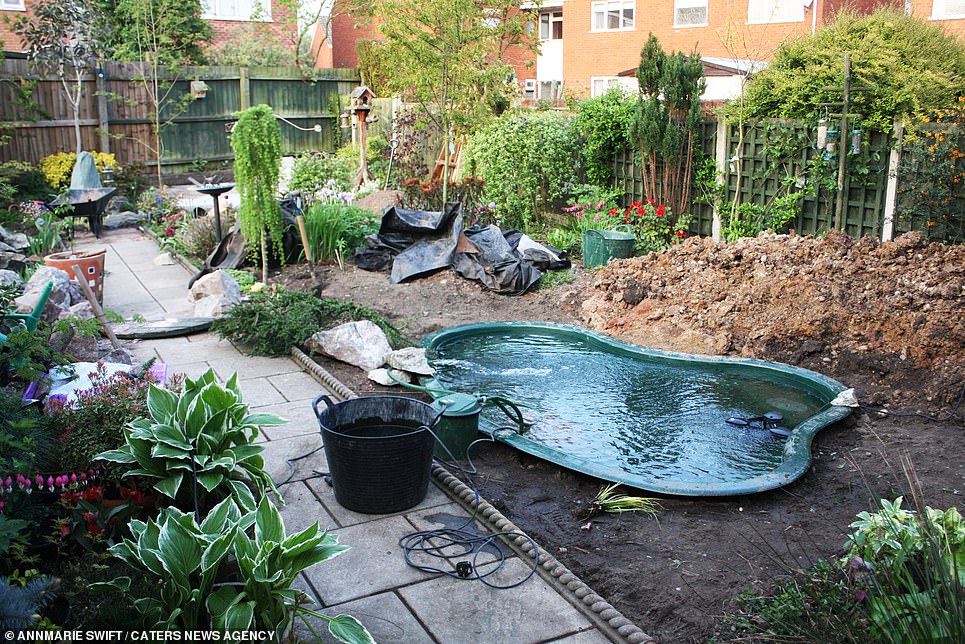 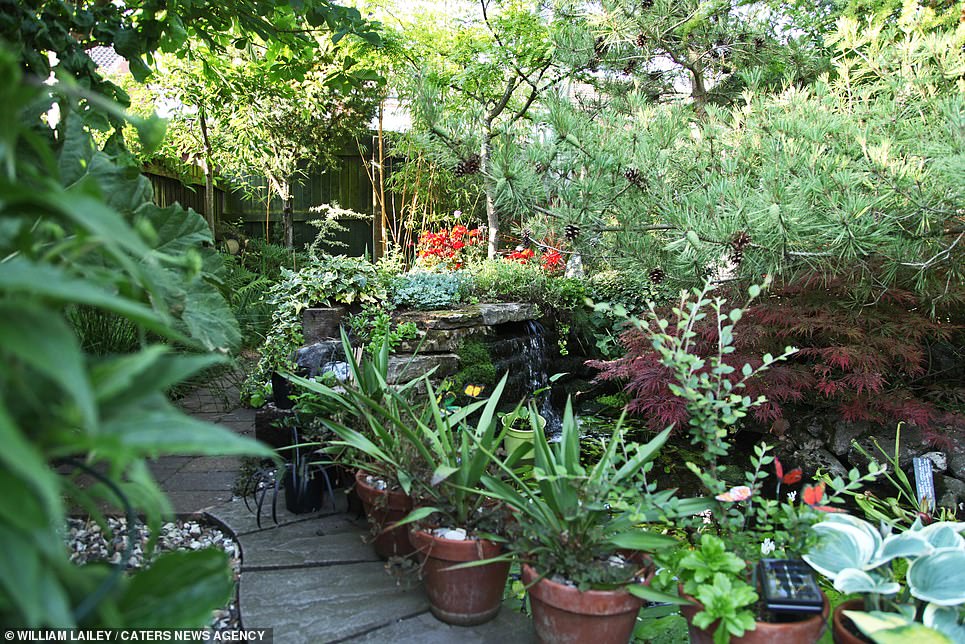 When the couple began transforming the space in 2008 they decided they wanted a pond and it has since expanded into a tropical paradise (left – before, right – after) 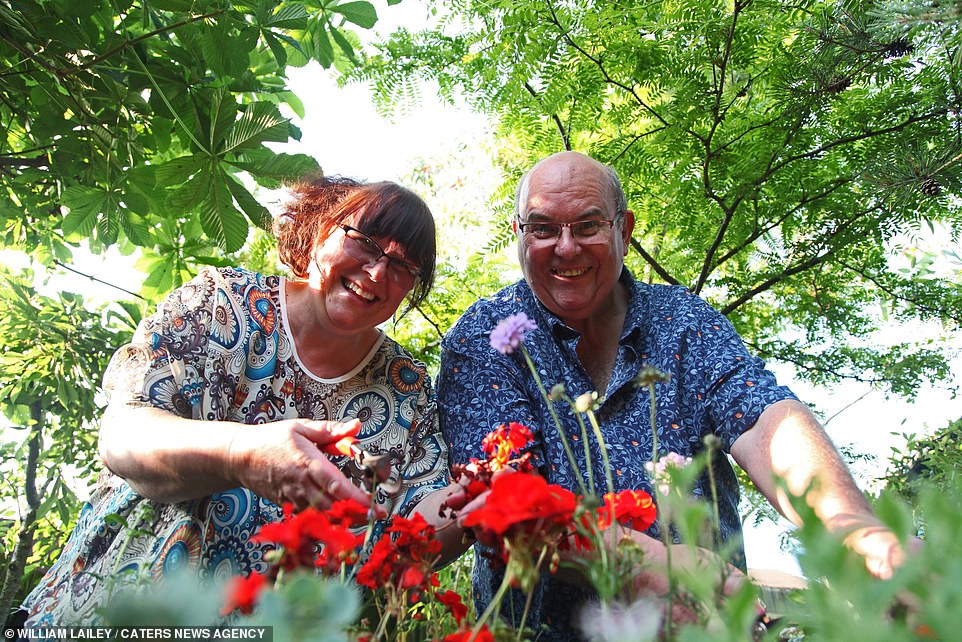 Annmarie, 57, and Andrew, 60, have spent the last 12 years perfecting their garden and estimate they have spent around £10,000 on the transformation 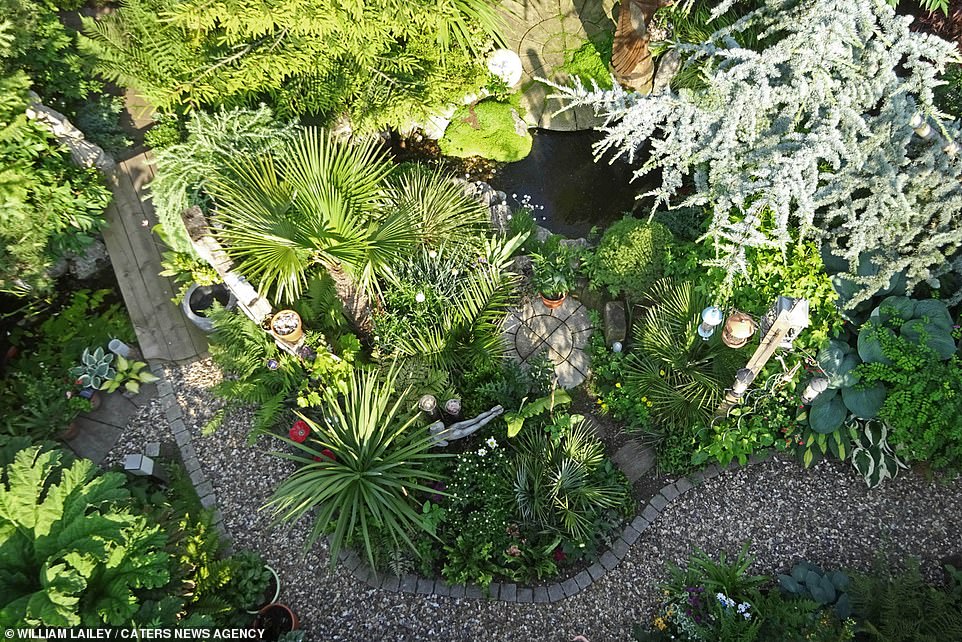 Andrew and Annmarie spend every spare minute in the garden and their hard work has turned the plain garden with a lawn and a few plants into the top secret masterpiece.

When they first started the transformation they began by putting in a pond at the bottom of the garden but their vision soon escalated and they decided they wanted a bigger pond.

Andrew said: ‘Annmarie fancied a bit of slate, and I wanted to keep fish, so we dug out a pond.

‘Then we made a stream, followed by another pond with a waterfall at the end, and eventually joined it all up. The water features have been a huge success.

‘Water brings so much wildlife into the garden. The birds bathe, and we have frogs, newts and loads of types of moths and butterflies.’ 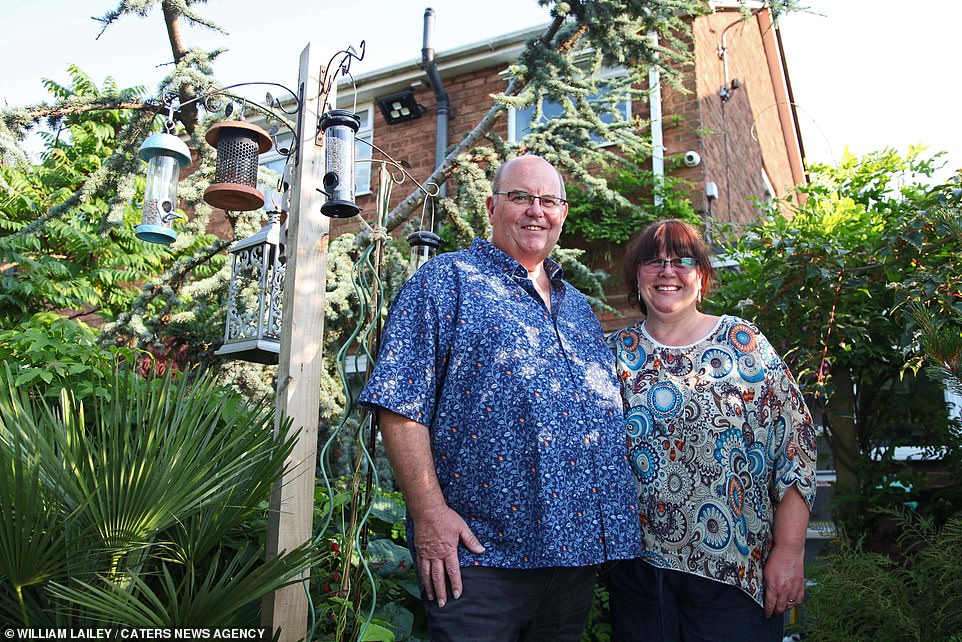 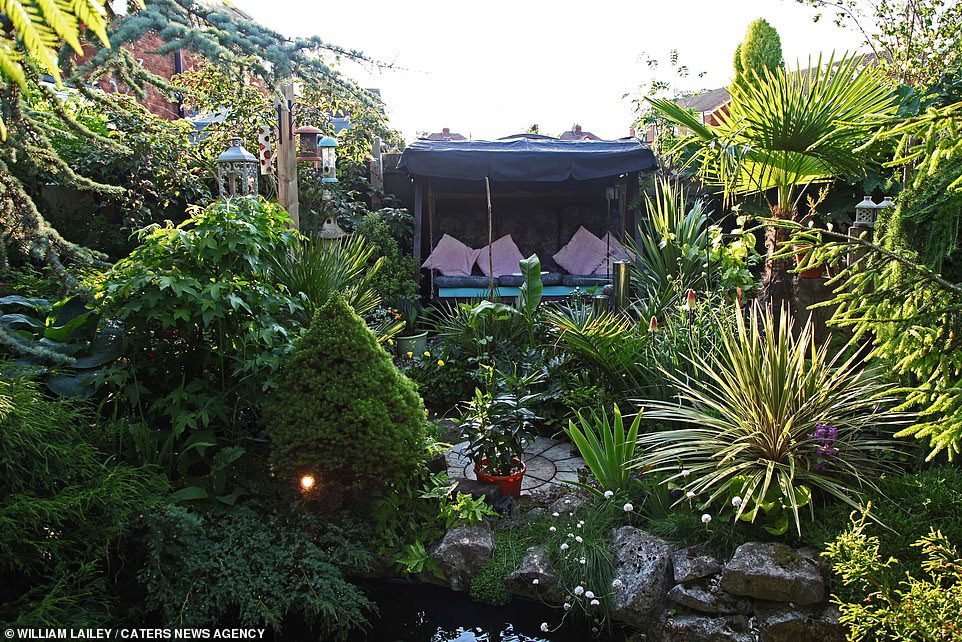 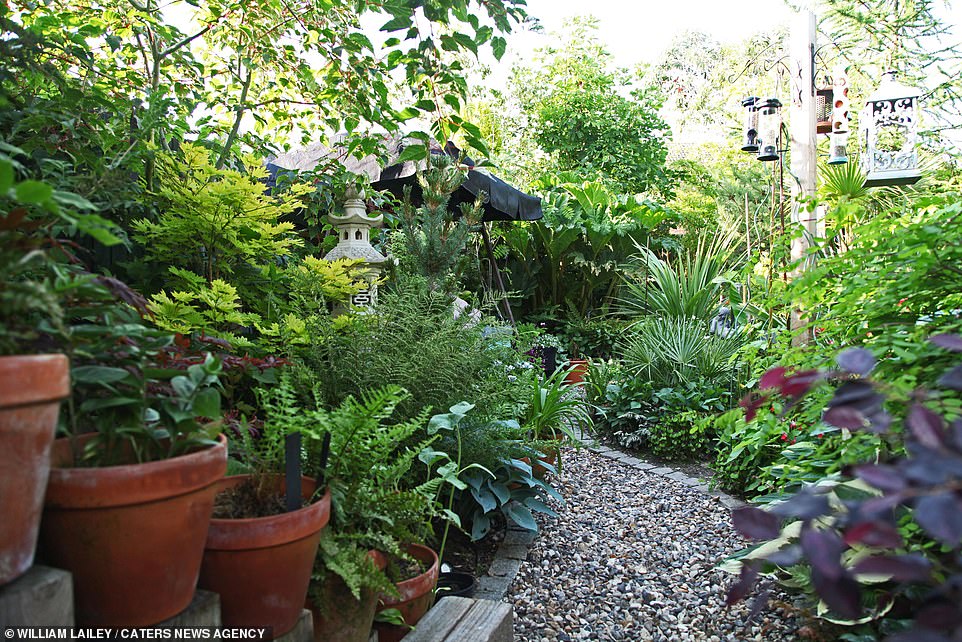 In the garden there are around 50 trees, countless unusual plants such as ferns, bamboos, bananas and yuccas and a hydrotherapy tub

Annmarie added: ‘Bees nest near the water too. We used to have so many slugs and snails but now they’re almost gone – we think the frogs are eating them.’

As they began to add new plants and features to the garden they dropped their Japanese-themed plans, adding in waterfalls and unusual plants. ‘We like anything tropical,’ Andrew said.

Overall, they have around 50 trees, a huge collections of ferns, a large pond connected by a stream to a smaller pond with a waterfall.

The fire safety engineer, said: ‘We finally got it to where we wanted it. It took us years because everything that has to do with gardening is usually expensive. 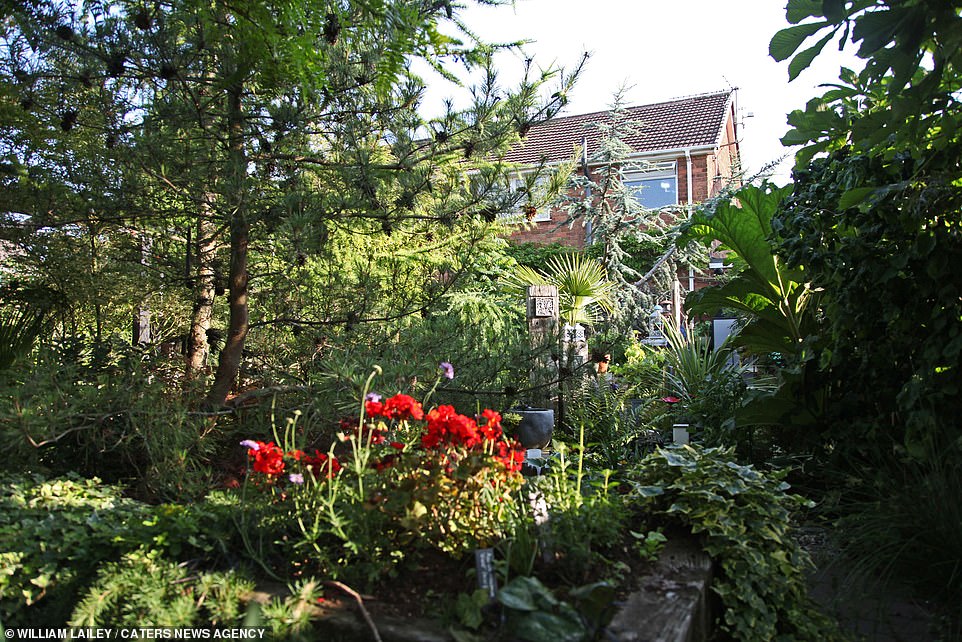 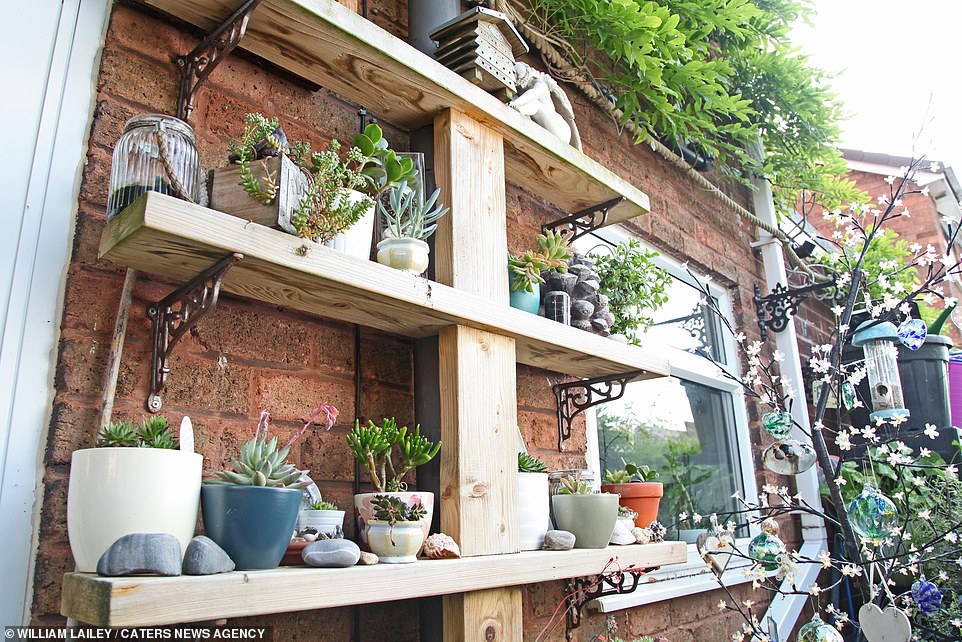 To add to the ever-growing  list of plants and trees in the garden, the couple also created a wall of succulents on the rear of the house

‘It’s our own special corner, we spend a lot of time in the garden, it’s beautiful. There is a lot of wildlife, we get all sorts of birds, moths and frogs – it’s because of the water.

‘Annmarie and myself do everything together, we designed it together, everything we did as a pair but I must admit my wife is the main gardener.

‘We get so many nice comments from friends and neighbours.’

The couple’s impressive garden made it to the top four in the Daily Mail’s National Garden Competition last year after they were persuaded to enter by a neighbour.