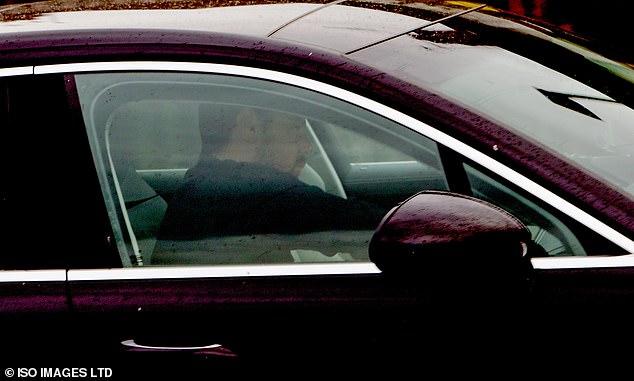 EastEnders stars including Danny Dyer and Luisa Bradshaw-White were spotted getting their temperatures checked in their cars as they continued their return to filming on Tuesday.

Danny, 42, who plays Mick Carter, was the first to arrive at the set of Albert Square in his black car and was closely followed by Luisa Bradshaw-Wright, 45, who plays Tina Carter.

Danny looked focused as he drove into the set and had his temperature checked before the working day began.

Getting back to work: EastEnders cast members including Danny Dyer (above) and Luisa Bradshaw-White were spotted getting their temperatures checked in their cars as they continued their return to filming on Tuesday 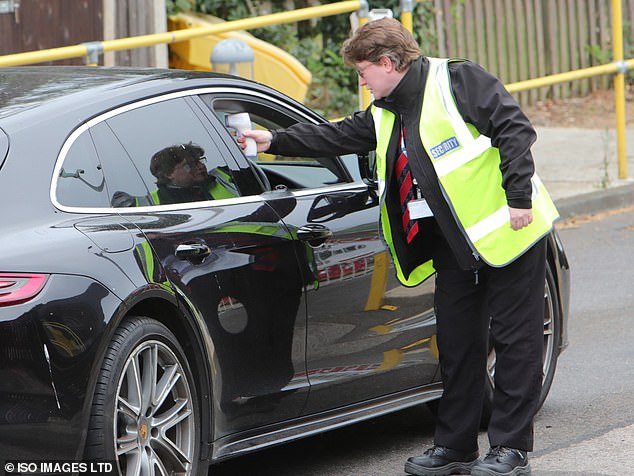 Keeping safe: Actors had to have their temperatures checked before they were allowed to resume filming the soap

The trio of actors had their temperature checked by security guards before they were allowed to enter the site of the recording set.

Filming of the beloved TV soap opera resumed on Monday and it is unclear when new episodes will air.

On Monday, show stalwarts including Danny, Adam Woodyatt and Jake Wood were snapped adhering to social distancing guidelines while filming their scenes. 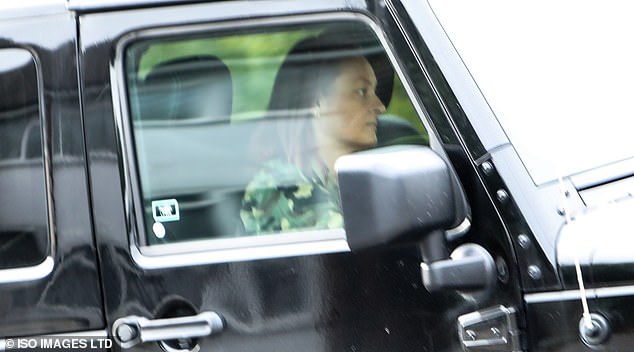 Back to normal:  Tina Carter actress Luisa looked focused as she drove into the soap’s set

Those on set now have to follow new social distancing guidelines in accordance with government regulation so that they are able to return safely amid the crisis.

Fans are anticipating the show returning several weeks down the line, as the programme aired its final episode earlier this month after running out of episodes due to the COVID-19 crisis.

The hit BBC One soap is keeping loyal viewers in suspense as they ended the show with a dramatic Sharon Mitchell cliffhanger.

Production on EastEnders came to a halt in March, when the UK went into lockdown and most people were instructed to stay home, and work from home if possible.

The  programme is set to return to the BBC with 20-minute episodes, four days a week. 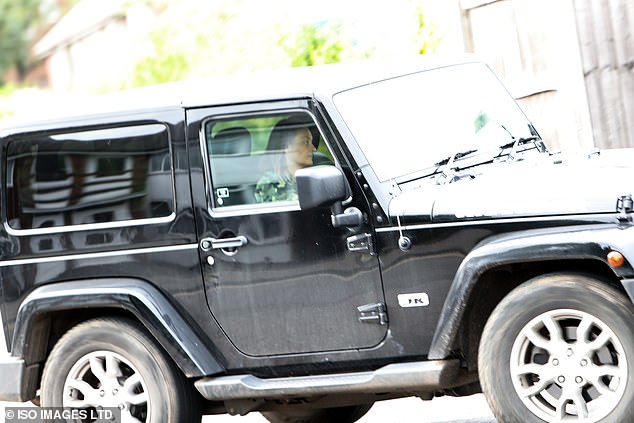 Safety first: The trio of actors had their temperature checked by security guards before they were allowed to enter the site of the recording set

According to Jake Wood, who plays Max Branning, 47, CGI is being used in almost every shot for new episodes.

The star spoke to Piers Morgan and Susanna Reid on Tuesday’s Good Morning Britain after his first day back on set on Monday.

He said: ‘It’s going to take a bit of getting used to. We’re all socially distant so everyone is two metres apart. It’s quite extraordinary the way were shooting it, the way we’re filming it.’

‘They’ve been there for weeks working out the way to do it. We’ve seen some of the stuff they’ve shot, it’s very very clever. You’re not going to notice a difference as a viewer.

‘Almost every shot has got CGI in it.’ 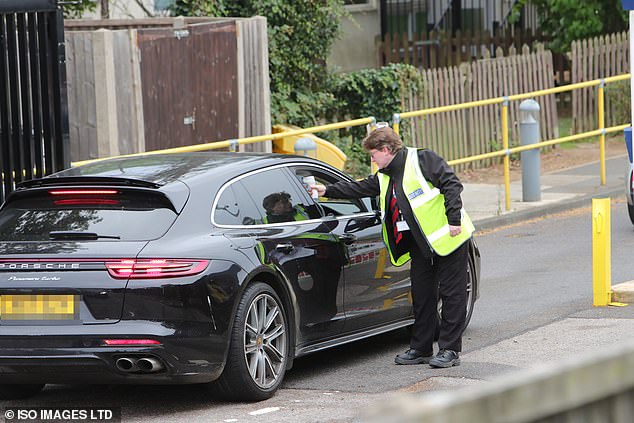 Exciting times: Filming of the beloved TV soap opera resumed on Monday and it is unclear when new episodes will air

Until now, only two pre-filmed EastEnders episodes have aired a week to make them last as long as possible.

‘Since we postponed filming we’ve been working non-stop trialling techniques, filming methods and new ways of working so that we can return to screens four times a week – as EastEnders should be.

‘Filming will inevitably be a more complex process now so creating 20-minute episodes will enable us to ensure that when we return, EastEnders will still be the show the audience know and love.’ 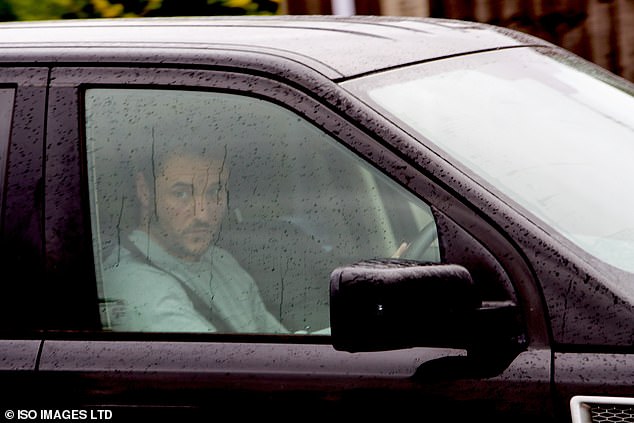 Until the new episodes air, the show is plugging the gap with classic EastEnders episodes and a spin-off show that will feature presenter Stacey Dooley.

Stacey, 33, is now hosting a new show called EastEnders: Secrets From The Square on Monday nights.

She is presenting the show from the soap’s famous restaurant Walford East and will be joined by two members from the cast. 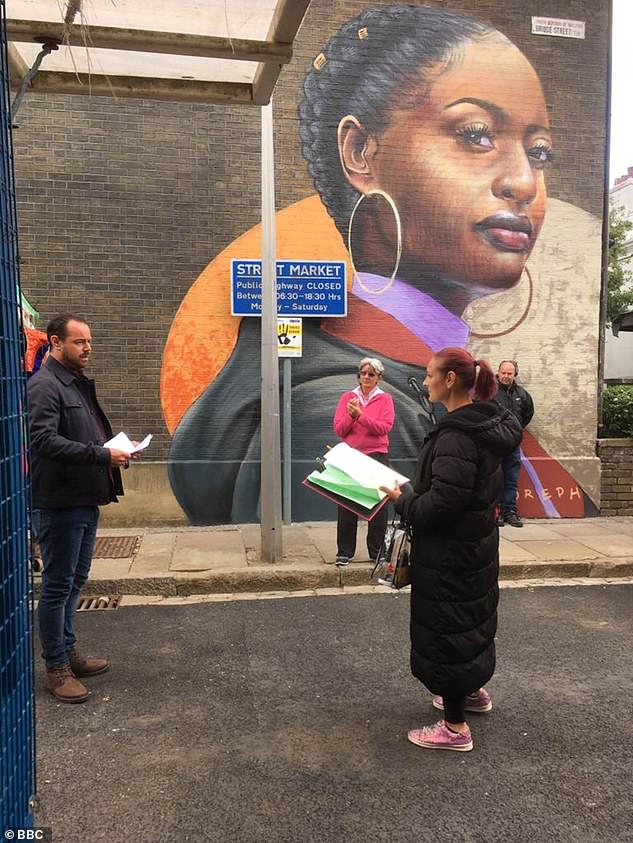 They’re back!  On Monday the EastEnders cast and crew returned for their first day of filming since shooting the soap was put on hold amid the coronavirus pandemic (above with Luisa)

There will also be an occasional sneak peek behind the scenes in the show, which launched on June 22. 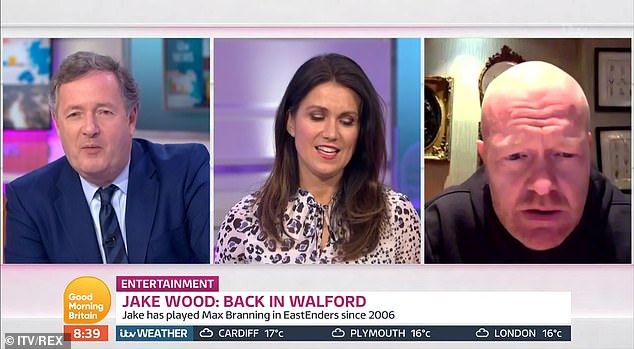 On set secrets: Jake Wood has revealed that CGI is being used in almost every shot for new episodes of EastEnders 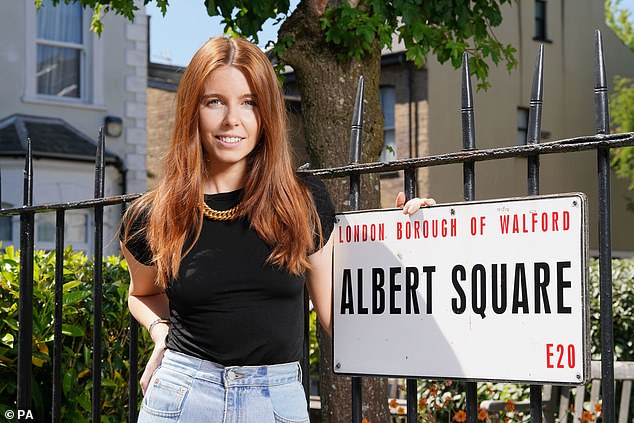 New show: Until the new episodes air, the show is plugging the gap with classic EastEnders episodes and a spin-off show, Secrets From The Square, fronted by Stacey Dooley