Boy, three, dies after car ‘driven by an elderly woman’ mounts pavement and smashes into him and his mother on Edinburgh street

A child, three, and woman were struck by the car after it mounted the pavement The car, which hit a building, is thought to have been driven by an elderly womanThe crash happened in Morningside, Edinburgh, around 2.30pm this afternoon The three-year-old boy died after this afternoon’s tragic collision

A boy of three has died after becoming trapped under a car that mounted the pavement.

The child and a 37-year-old woman thought to be his mother were taken to hospital after being hit by a red Kia in Edinburgh yesterday.

The boy died in hospital after the incident next to St Columba’s Hospice charity shop, on Morningside Road, at around 2.30pm.

The crash happened in Morningside, Edinburgh, around 2.30pm with the child, thought to be around three years old, losing their wellies in the collision 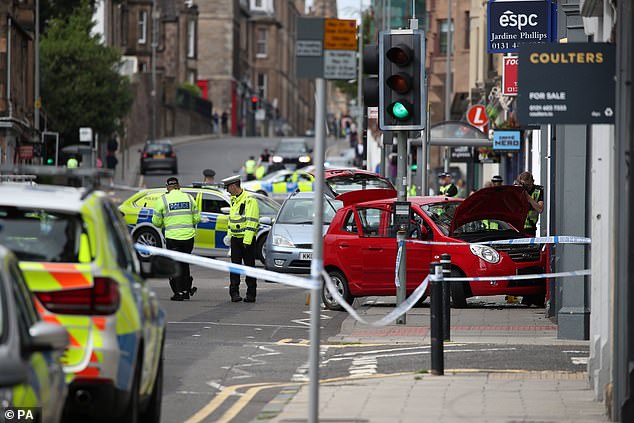 Firefighters and police officers blocked off the road in both directions in the wake of the crash.

Kelly Louise Dickson, 39, from Penicuik, Midlothian, who witnessed the collision, said it had left her shaken. She said: ‘It makes me feel sick. Seeing the car still there, all I can think about is that baby.’

She told how the child was ‘trapped between the car and the corner’. She added: ‘I called out for a man to help and then I just grabbed the mother.

‘The mother was shaking and I held her and she gripped me back. It was horrible to see. They were just walking down the street.’ 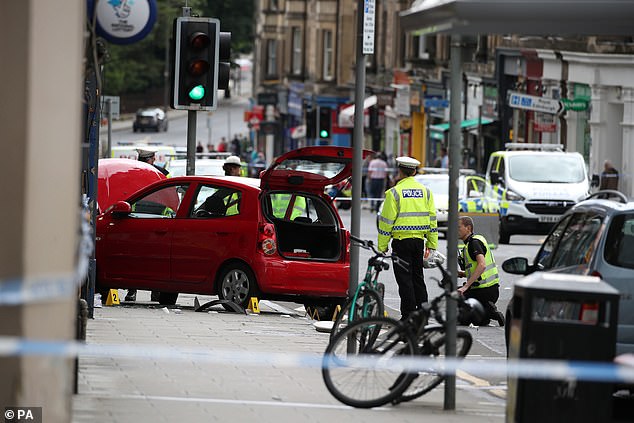 One witness, speaking on condition of anonymity, said: ‘There were two injured parties, one was a child who looked to be around three years old’ 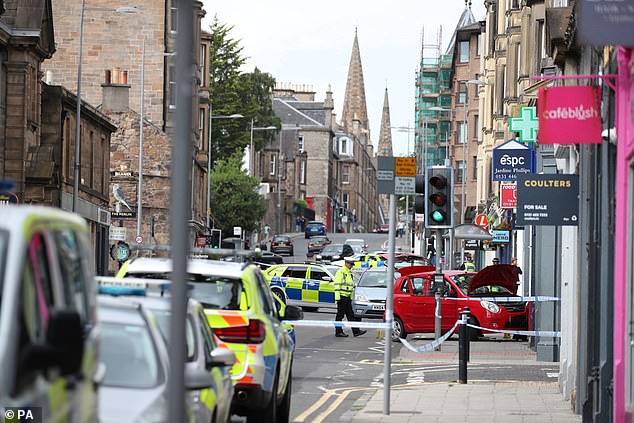 One local said: ‘There were people screaming. It was obvious that the car had mounted the pavement and hit pedestrians. People were comforting others. They were very upset. It was a horrible thing to have witnessed.’

Zulfu Vural told the Edinburgh Evening News: ‘I ran up because it happened right outside my brother’s business. I then saw a child on the ground surrounded by paramedics.’

Another witness said the boy ‘appeared to be partially under the car’, adding: ‘The other party was a female who appeared to be the child’s mother. She had cuts to her arm and face and was bleeding. The driver was an elderly woman.

‘A nurse and a pharmacist from a local pharmacy got to the accident before the ambulance arrived.’

Police were unable to give details on the condition of the driver.

Inspector Roger Park of Edinburgh Road Policing Unit said: ‘The heartfelt thoughts of my colleagues and I remain with the families involved in this absolutely tragic incident.

‘We are providing support to the family. Our enquiries will continue to establish the full circumstances of the collision.’