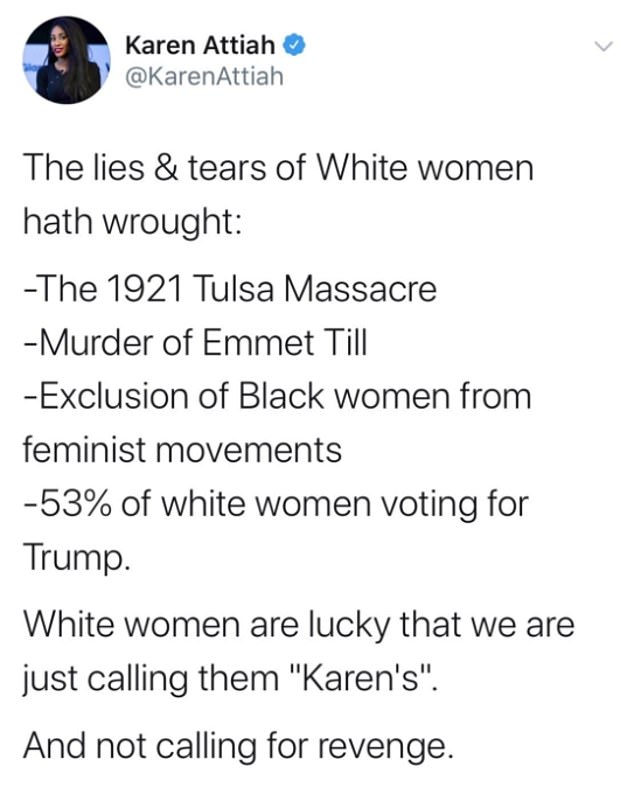 The Washington Post’s opinions editor has been accused of inciting violence for tweeting that white women are ‘lucky’ black people are ‘just calling them Karen’s and not calling for revenge’.

Karen Attiah posted the tweet on Sunday, saying: ‘The lies and tears of white women hath wrought; the 1921 Tulsa massacre, murder of Emmett Till, exclusion of black women from feminist movements, 53% of white women voting for Trump.

‘White women are lucky that we are just calling them Karens. And not calling for revenge.’

Later, in her comments section, she doubled down on the remark, saying: ‘I’m just saying. Be happy we are calling for equality. And not actual revenge.’

The tweets attracted criticism from other users who accused her of inciting violence and called for her to be fired.

Attiah has now deleted them. In others, that are still online, she said: ‘A Karen “meme” is NOWHERE on the same level of generations of segregation, violence, displacement, lynching and white impunity.

‘The dark side to hangwringing about how Karen “hurts white women’s feelings” is that it is a distraction from how everyday white women uphold white supremacy through violence, aggression and the weaponizing of their gender.’

She then said she did not delete the tweet because she regretted it, but rather that because ‘I just want to say some s**t real quick and then leave. It’s very much the energy of squidward running away manifested’.

The Washington Post has not commented on her remarks.

The 1921 Tulsa Massacre she referred to started with the alleged sexual assault of a white elevator operator by a black teenage boy.

It was never proven that any attack actually happened and the girl involved declined to press charges but the incidents incited days of violence that led to dozens of deaths.

Emmett Till was just 14 when he was lynched in 1955 after a white woman complained he’d offended a white woman in a grocery store.

Some Twitter users say Attiah should lose her job. They are posting screenshots of them with the hashtag #fireKarenAttiah.

‘”Human rights and social justice”? Only for people of races you like. You threaten white women with violence. WashPo what is your response? The world is watching and waiting,’ one said.

‘Karen Attiah is an editor for the Washington Post, making the sweeping racial judgement that white people are taught to “fear” & “eliminate” women & minorities.

‘It has no place in America,’ another said.

Karen is the name being given to entitled, white women caught on camera or video trying to assert themselves over people of color in social situations.

The incidents – which go viral on social media – began before the death of George Floyd on May 25th but have now gathered steam and are part of the national conversation about race relations in America.

While many of the exchanges are undoubted examples of bigotry, others are less clear cut.

An unidentified white woman in Seattle was filmed sobbing and insisting she was not a Karen after being accused of flipping the bird at a black man at a light stop. Karlos Dillard, the man, followed her home to film her and post the footage online. In another video, he said she’d called him the N-word. That was not caught on tape

One of the first ‘Karen’ incidents was in Central Park when Amy Cooper (pictured) called the cops on black birdwatcher Christian Cooper, alleging that he was threatening her, when all he’d asked her was to do was put her dog on a leash

Last week, an unidentified woman in Seattle was filmed sobbing in her driveway and pleading not to be filmed, saying she had a ‘black husband’.

Karlos Dillard filmed the video, saying the woman had called him the N-word during a road rage dispute.

He then started selling t-shirts online with the words ‘I have a black husband’ printed on them and defended it by saying that ‘white people ‘profit off of everything black people do in this country’ and calling it his ‘prerogative’ if he wanted to sell the t-shirts.

The woman in the video denied flipping him off and he did not accuse her of using a racial slur against him when they were together. That accusation was in a different piece of footage when she was not there.

Conversely, one of the original ‘Karen’ videos involved white woman Amy Cooper calling the police on Christian Cooper, a black birdwatcher in Central Park, claiming he was threatening her when he had simply asked her to put her dog on a leash.

Christian Cooper was never charged but he has since described the footage as proof of how quickly a white person can be to make a false or overzealous accusation against a black person to law enforcement.

In light of police brutality and systemic racism within law enforcement, such false accusations, he said, can be particularly dangerous.