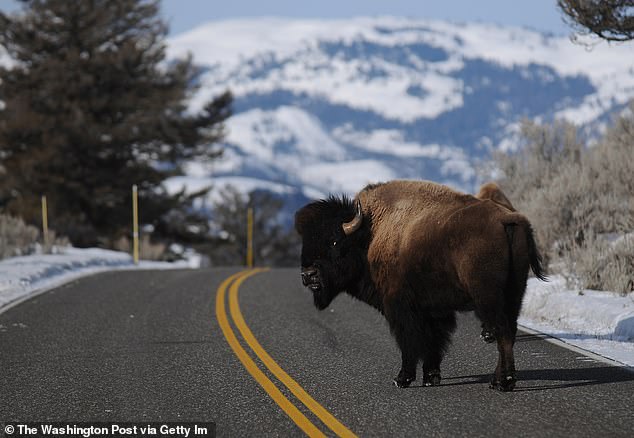 California woman, 72, is gored by a bison at Yellowstone National Park after repeatedly approaching the wild animal to take its photograph

A California woman is in hospital after she was repeatedly gored by a wild bison at Yellowstone National Park.

The 72-year-old – who has not been publicly identified – was attacked at the Bridge Bay Campground campsite last Thursday after she approached the wild animal to try and snap a photograph.

The woman was immediately tended to by park rangers before she was flown  to Eastern Idaho Regional Medical Center via helicopter for further treatment. Her current condition is not known.

A 72-year-old California woman is in hospital after she was repeatedly gored by a wild bison at Yellowstone National Park last Thursday evening. One of the animals is pictured in the park in March

A press release from the National Park Service on Monday stated that the women came within 10 feet of the bison before she was gored.

‘To be safe around bison, stay at least 25 yards away, move away if they approach, and run away or find cover if they charge,’ the park’s Senior Bison Biologist Chris Geremia is quoted as saying in the statement.

‘Bison are wild animals that respond to threats by displaying aggressive behaviors like pawing the ground, snorting, bobbing their head, bellowing, and raising their tail. If that doesn’t make the threat (in this instance it was a person) move away, a threatened bison may charge.’

The National Park Service says the incident is still under investigation. 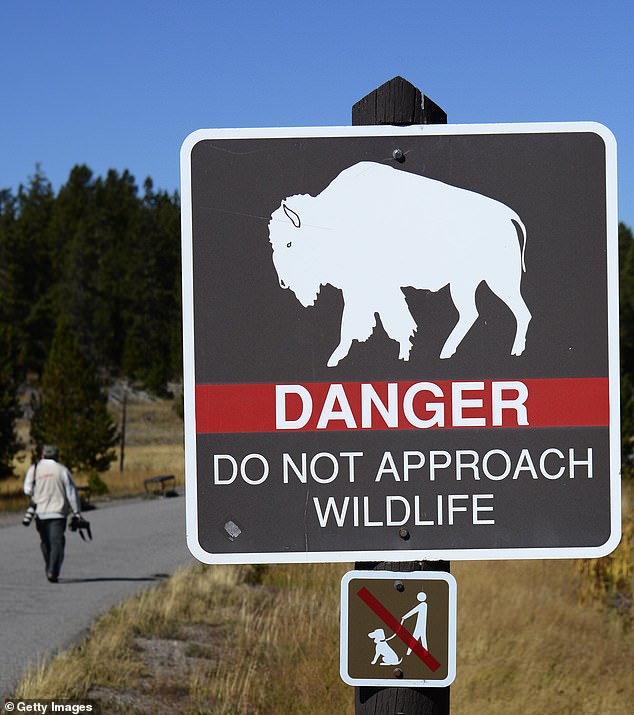 A press release from the National Park Service on Monday stated that the women came within 10 feet of the bison before she was gored. Officials advise keeping at least 25 feet from the animals 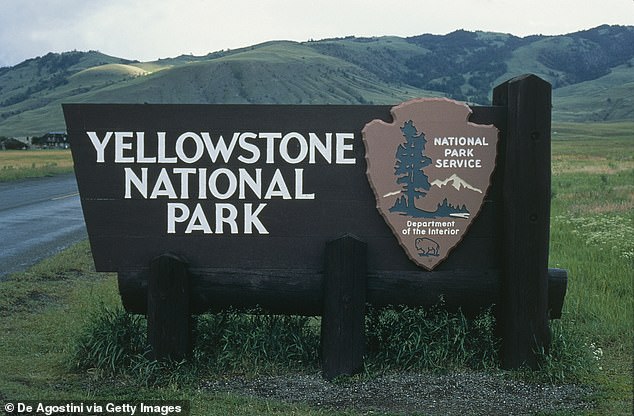 It’s the second bison attack at Yellowstone in a little over a month. Another woman was injured by one of the animals on May 20 ‘after following it too closely’. She was treated in the park, but refused to be airlifted to hospital.

Meanwhile, a 37-year-old woman was scratched by a female bear in Yellowstone last Monday, when she came across the animal accompanied by its cub.

The solo hiker was out on the Fairy Fall Trail near Old Faithful in in Missouri when the mama bear knocked her over and scratched her thigh. She suffered facial injuries, but was able fend off the animal with bear spray.

The three attacks come after Yellowstone reopened two of its five entrances on May 18, following closures due to the coronavirus pandemic.

As visitors pour into the park during the summer season, rangers are urging tourists  to give animals space when near a trail, boardwalk, parking lot, or in a developed area.

They advise at least 100 yards (91 m) for bears and wolves, and 25 yards (23 m) for large animals including bison, elk, bighorn sheep, deer, moose, and coyotes. 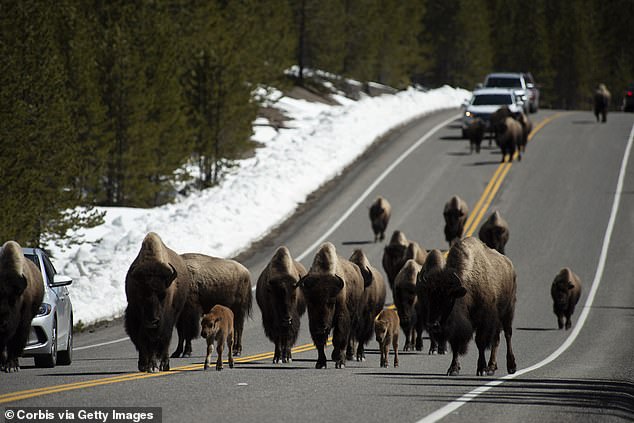 Experts estimate that there are approximately 5,000 bison in Yellowstone National Park