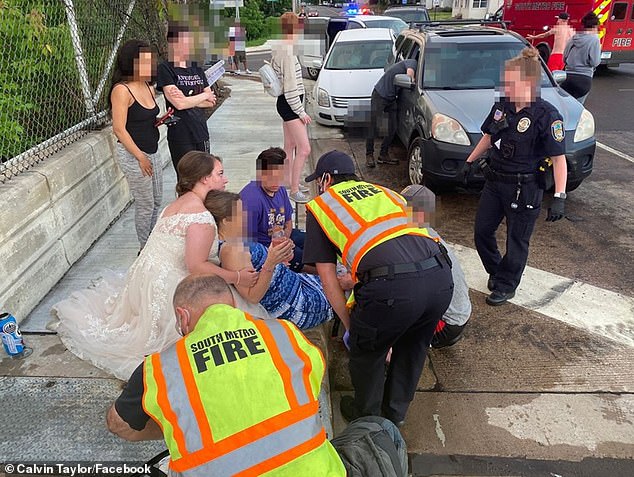 By Marlene Lenthang For Dailymail.com

A nurse celebrating her wedding day jumped into action to help a car accident victim, still wearing her white dress, just moments after leaving her own ceremony.

Rachel Taylor, 22, and her husband Calvin, 23, just tied the knot on June 21 and left their blissful ceremony in Minnesota around 8.30pm.

But as they were on their way to their new town home in Inver Grove Heights, they saw a car accident where a car and van crashed on the Fifth Avenue bridge over Interstate 494 in South St. Paul.

As the occupants of that crash tried to talk things out, a black Chevy Tahoe sped into the scene and crashed into other vehicles, adding to the chaos and injuring a woman named Tamara Peterson.

‘I saw a couple of people dragging a woman over to the side of the road. I could see a gash in her right leg. I think I saw her bone in it,’ Taylor said to the Twin Cities Pioneer Press.

Nurse Rachel Taylor, 22, tended to a car crash victim on a highway while still wearing her wedding dress, just moments after leaving her own ceremony, on June 21 in St. Paul, Minnesota 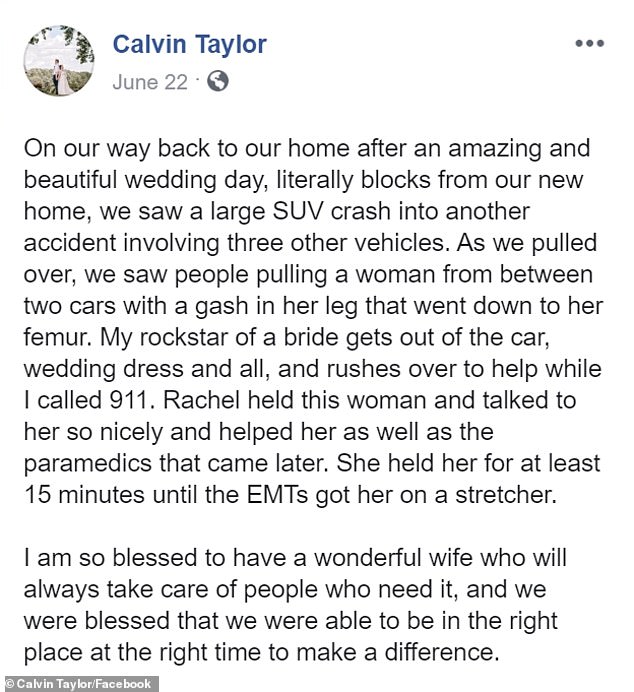 Taylor’s nursing instincts kicked in and still wearing her wedding dress she ran over to help the injured woman. She dragged the woman to the side of the road where she held her and kept her calm until paramedics arrived.

Taylor’s husband took a picture of the rescue scene where a group of people are seen on a sidewalk, surrounding the injured woman.

‘On our way back to our home after an amazing and beautiful wedding day, literally blocks from our new home, we saw a large SUV crash into another accident involving three other vehicles. 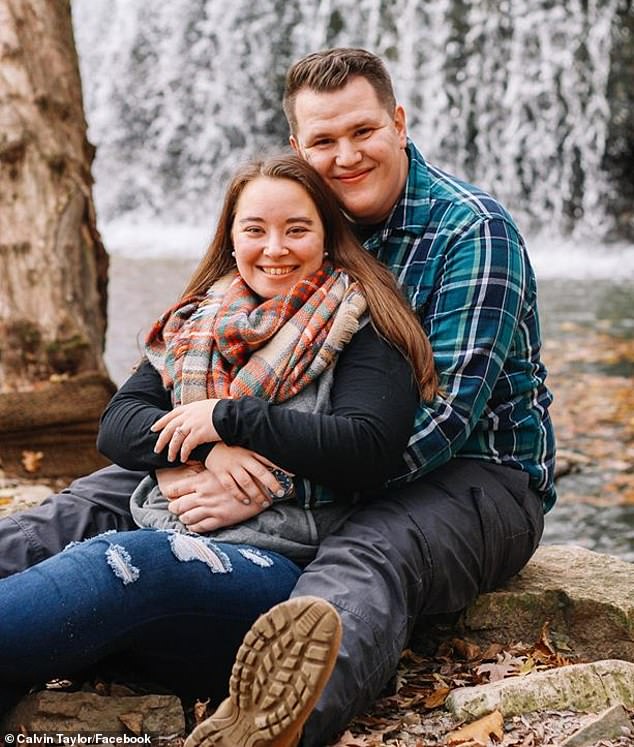 Calvin and Rachel Taylor pictured above

‘As we pulled over, we saw people pulling a woman from between two cars with a gash in her leg that went down to her femur.

‘My rockstar of a bride gets out of the car, wedding dress and all, and rushes over to help while I called 911,’ he explained.

He said that Rachel held the injured woman and talked to her to keep her calm for about 15 minutes until EMTs could get her on a stretcher.

‘Rachel and I are on our way to our honeymoon, and I am still blown away that she got out of the car in a scary situation to do what she does best,’ he added.

Rachel said in the incident she kept showering the injured woman with words of praise. 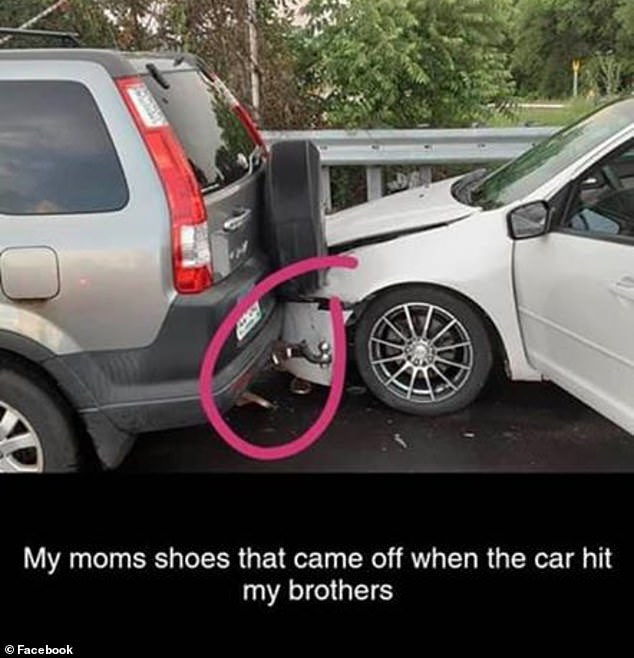 A view of the car crash scene involving multiple vehicles above

‘She was awesome and helped save my life by keeping me focused, and calm. She certainly is a gifted angel and chose the right career path,’ Tamara Peterson said.

Peterson is now recovering at home and hopes to meet the Taylors again to say thank you. A GoFundMe page has been launched for her medical expenses.

‘I just went into nurse mode. It seemed pretty natural. I was pretty surprised. I’ve always been lacking in confidence about my nursing abilities so it was nice to see that in a situation like that, I knew what to do,’ Rachel said, reflecting on her rescue.