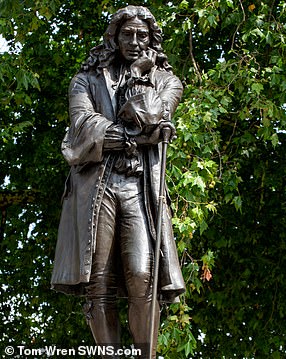 Edward Colston was born to a wealthy merchant family in Bristol, 1636.

After working as an apprentice at a livery company he began to explore the shipping industry and started up his own business.

He later joined the Royal African Company and rose up the ranks to Deputy Governor.

The Company had complete control of Britain’s slave trade, as well as its gold and Ivory business, with Africa and the forts on the coast of west Africa.

During his tenure at the Company his ships transported around 80,000 slaves from Africa to the Caribbean and America.

During Colston’s life, slavery was being actively encouraged by King Charles II, with many European countries taking part in the trade.

Colston’s brother Thomas supplied the glass beads that were used to buy the slaves.

Colston became the Conservative MP for Bristol in 1710 but stood only for one term, due to old age and ill health.

Historian and broadcaster David Olusoga said one of the main problems the statue caused was that people did not understand why it was a source of upset for many in the city.

‘This is a city that is about 14% BAME with a statue of somebody who was not just a slave trader, he was involved in the Royal Africa Company, the company that trafficked more people into slavery than any in British history,’ he told BBC News.

‘The fact that it has not been seen as a problem for such a long time, that so many people are confused as to why the statue offends and upsets so many people, has been the problem.’

Colston donated money to causes in and around Bristol before his death in 1721 – including to the city’s churches, founded almshouses, Queen Elizabeth’s Hospital School, and founding a religious school for boys.

According to Historic England, his involvement in the slave trade was the source of much of the money which he bestowed in the city.

Due to his philanthropy, Colston’s legacy has been honoured by the city he once called home, where streets, memorials and buildings bear his name.

An inscription on the statue, which was built in 1895, read: ‘Erected by citizens of Bristol as a memorial of one of the most virtuous and wise sons of their city.’

Following Colston’s death in the 18th century, he was described as ‘the brightest example of Christian liberality that this age has produced’.

The society says it is ‘seeking to emulate the charitable endeavours of Edward Colston,’ but distances itself from the ‘evils of slavery, both in the days of Colston and in the appalling levels of modern day slavery’.

A statue was erected in his honour as well as other buildings named after him, including Colston Hall.

Campaign group Countering Colston has called for an end to Bristol ‘publicly celebrating’ the controversial figure, and for the city to recognise the ‘true history of transatlantic slavery, colonialism and exploitation’.

An 11,000-strong petition said the statue of Colston had ‘no place’ in Bristol’s ‘beloved’ city centre.

In a victory for campaigners, Colston Hall – Bristol’s largest concert hall – announced in 2017 it would be re-branding, while a school formerly known as Colston’s Primary School was renamed last year.