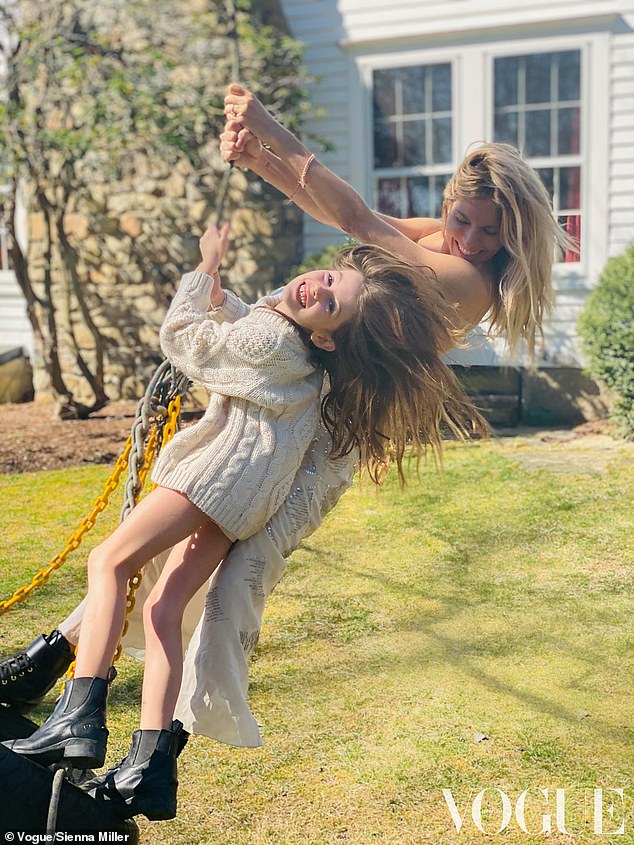 Sienna Miller has revealed her lookalike daughter Marlowe’s face for the first time for Vogue’s Way Back Home shoot.

The feature sees celebrities stars share snapshots of family life under lockdown for the August issue of British Vogue.

Marlowe, seven, is Sienna’s daughter from her relationship with musician Tom Sturridge, who dated from 2011 until 2015.

Lookalike: Sienna Miller has shown daughter Marlowe’s face for the first time for Vogue’s ‘at-home’ shoot – Marlowe is her daughter, 7, from her previous relationship with Tom Sturridge

The pair dress in cream as they pose gigging on a swing in their garden as Sienna discusses what life in lockdown has been like for them in New York.

She said: ‘I’m in a rented place with some of my family [including daughter, Marlowe, pictured] and a few friends.

‘My days are consumed with home-schooling, cleaning, reading books I never got around to, walkin, puzzles, and binging on content to produce, direct or act in. 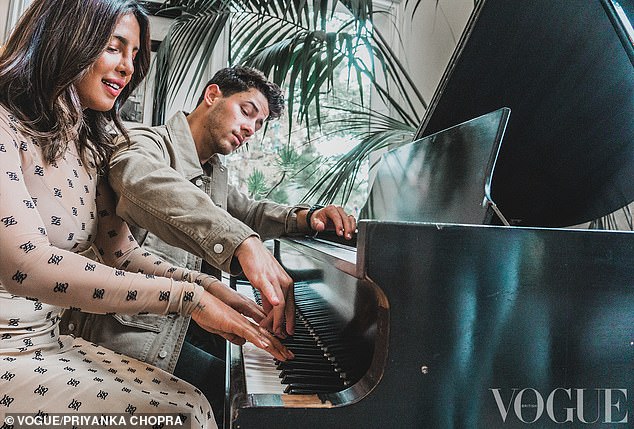 ‘It’s been difficult being apart from my mom and brother’: Priyanka Chopra has asked husband Nick to teach her the piano during lockdown

‘I miss my family in England – my mother’s angles on FaceTime have kept me smiling (I’ve seen extreme close-ups of areas no one should have access to), but I yearn to visit them.’

Priyanka Chopra and Nick Jonas pose at the piano for their snapshot after she actress said she had asked her husband to teach her during lockdown.

She said: ‘Although it has been really, really difficult being apart from my mom and brother, who are both in India, I’m so grateful to have spent time with my husband, family and dogs, but mostly with my four year old niece, Krishna.

‘It’s been incredible watching her discover new things. Creativity has always been an outlet for me to relieve anxiety.

‘I’ve been writing my book, reading scripts and developing content for film and TV – and I’m trying to learn the piano.’

Dua Lipa is currently living in London and posed in a smiley face top and knitted patchwork skirt alongside boyfriend Anwar Hadid.

She said: ‘I’m with my boyfriend Anwar. We’ve been playing Xbox, reading and trying to learn new recipes.

‘Yesterday we made lamb maeloubah – Anwar’s dad sent us the recipe. It was fun to cook together, which is lucky because it was a three-hour activity; it’s the most ambitious thing I have ever set out to make.

‘It’s quite rewarding when it turns out like the picture. Today I’m making a leek stew my mum would cook, which really takes me back to my childhood.

‘Anwar has been dyeing my hair all kinds of colours – pink, orange, red – it has been a different colour every week.’

Actress Gemma Chan is also living in London and she shared a picture of herself with boyfriend Dominic Cooper doing charitable work from his car.

She said: ‘My partner Dominic Cooper and I have been busy on behalf of the Cook-19 initiative, delivering freshly cooked food and supplies to NHS staff who may be struggling due to long shifts or self-isolation.

‘This picture was taken during a delivery. It’s been frustrating to see the lack of protection for staff and the lack of accountability from government.

‘On the positive side, it’s amazing to see people across the world coming together at a local level. In other news,

‘I’ve started trying to grow vegetables; there just might be enough for a salad by September.’

Ricky Martin has been enjoying some family time in Los Angeles.

He said: ‘I’m at home with my husband Jwan Yosef, my mother Nereida, and my four children, Matteo, Valentino, Lucia and Renn.

‘Keeping busy is not a problem, I have my hands full with two babies and pre-teen twin boys. 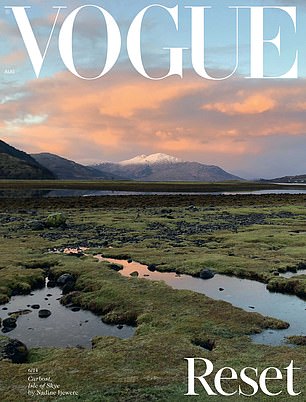 More to come: Read the full feature in the August issue of British Vogue, available via digital download and on newsstands Friday 3rd July

‘I’m also working on my new album – my engineer is in New York and my producer is in Miami, but through technology, it should be out this year as planned.

‘The most challenging part is not knowing when and how we will get back to some form of “normal”. What sums up lockdown?

‘Diapers, music and me personally disinfecting all the deliveries. I also learnt to clean windows and iron sleeves like nobody’s business!’

Singer Sade is living in the West Country and shared a pictured of herself in the countryside with her beloved goddaughter Leah.

She said: ‘I’m on our farm in the West Country with my partner Ian; my mum Granny Annie, who it’s our principal job to keep from harm, our dog Jesse James; Reuben, a miniature dachshund left in our charge while our son Izaak isolates in California with his true love; and my goddaughter Leah.

‘Like everyone, we’re on a ship of unknown destination but that’s life … no mutiny yet. There’s always so much to do: there are songs I so want to write, and I’ve rediscovered the joy cooking brings.’

Read the full feature in the August issue of British Vogue, available via digital download and on newsstands Friday July 3