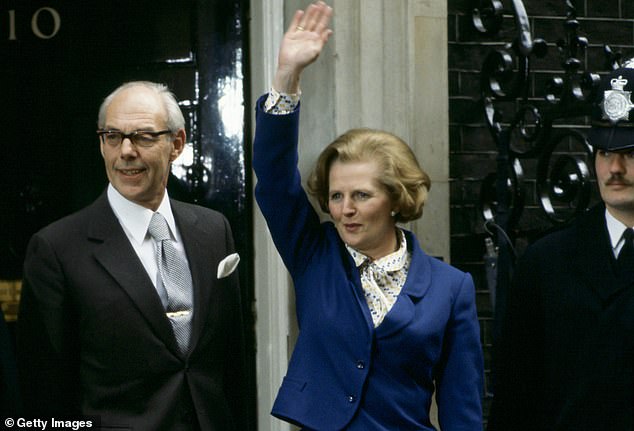 Can you possibly imagine Margaret Thatcher ever having had to reassure her audience that she was ‘not a Communist’?

The Iron Lady, after all, made her name by standing up to Communism wherever she encountered it, whether in the Kremlin or the hard Left British trade unions whose leaders she crushed.

Yet Boris Johnson, in perhaps his most significant speech so far on the future direction of this country, felt obliged to do so yesterday. 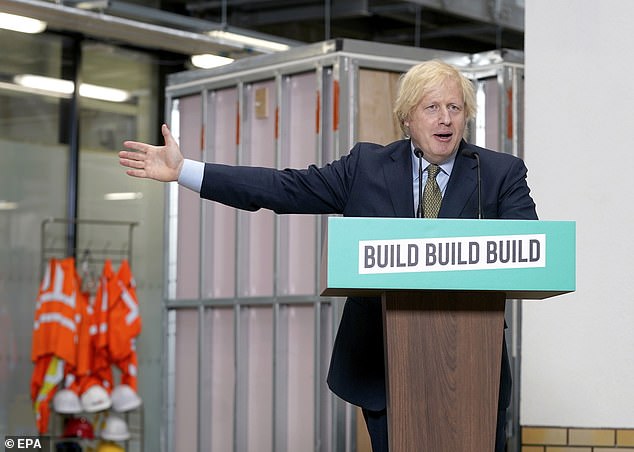 Yet Boris Johnson, in perhaps his most significant speech so far on the future direction of this country, felt obliged to do so yesterday

‘Friends, I am not a Communist,’ he told those listening.

Of course, it was a preposterous throwaway line to get a laugh after he had reeled off an avalanche of public spending pledges.

But it reminded us that, whatever else he had in common with Maggie — including his election-winning magic and charisma — Boris Johnson is no Thatcherite when it comes to economics.

It was also a long overdue acknowledgement by him of the increasing unease felt among many Conservative supporters over his economic response to the Covid crisis.

They have been deeply alarmed by levels of state spending that would make even a Socialist administration blush — but have been signed off by a Conservative Prime Minister.

Johnson won a general election landslide by telling voters Jeremy Corbyn would wreck the UK by spending taxpayers’ money like there was no tomorrow. But in the past four months the PM has done exactly that.

Furloughing and other rescue measures to prop up our beleaguered economy have consumed eye-watering sums — and now he is promising to spend even more billions in this investment programme.

He was given no choice but to lavish money on the rescue measures because of the need to protect livelihoods threatened by the pandemic. 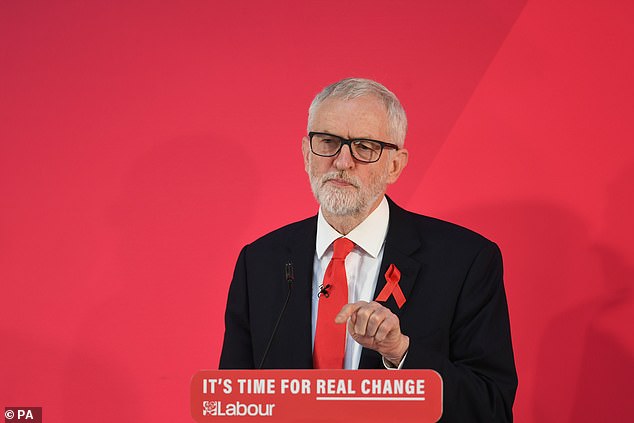 Johnson won a general election landslide by telling voters Jeremy Corbyn would wreck the UK by spending taxpayers’ money like there was no tomorrow. But in the past four months the PM has done exactly that

This was a formidable statement of intent delivered by a Boris who, blinking into the light of what we all hope will be a post-Covid dawn, seems to have recovered some of his Bojo mojo.

He thrives on the prospect of recovery — it is a fight far more suited to Boris the optimist than the dark battle against a raging pandemic.

It is no coincidence Boris delivered his speech in Dudley in the Black Country, the heart of Britain’s industrial revolution in the 19th century.

The town is part of the ‘Red Wall’ of parliamentary seats he won from Labour for the Tories at the election.

Many of those whose have benefited most from furlough and other generous Government initiatives to cushion the impact of the virus are working-class voters from exactly these constituencies. 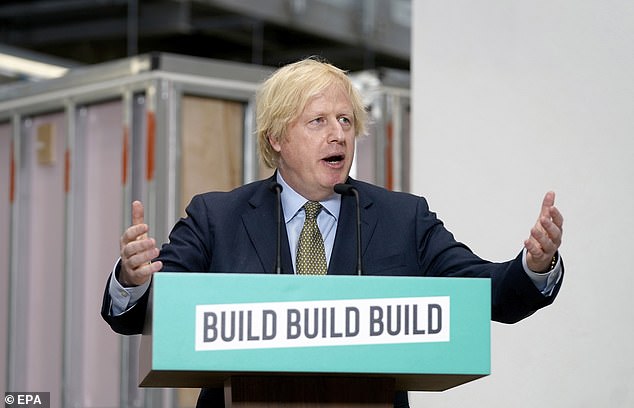 And yesterday he was busy reassuring them, promising they had not been forgotten, repeating his pledge to ‘level up’ again and again.

Indeed, his new ‘build, build, build’ slogan and that promise of £5 billion for infrastructure projects could have been designed for people like those in Dudley where they are used to rolling their sleeves up to earn a living.

Stressing the importance of all workers — not just those with Oxford degrees in Classics like himself, the Prime Minister said: ‘Talent and genius are expressed as much by hand and eye as they are by spreadsheet and essays.’

And, as for austerity, it’s banished. Boris refuses even to utter the term, calling it the ‘A’ word.

‘We’re not going to be cheese-paring our way out of trouble because the world has moved on since 2008,’ he announced in a dig at his predecessor as PM, David Cameron, and ex-Chancellor George Osborne. 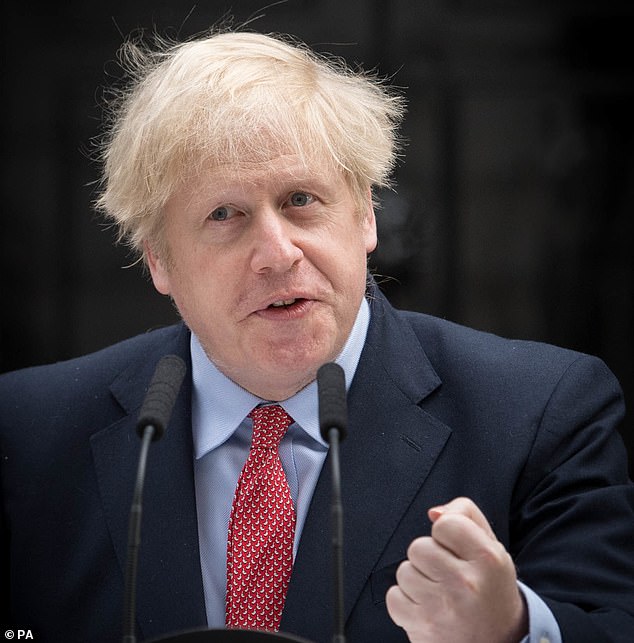 As for austerity, it’s banished. Boris refuses even to utter the term, calling it the ‘A’ word

Only he could get away with saying that with a straight face — the prudence, or austerity, of Conservative administrations since 2010 is what has made it possible for him to finance his multi-billion pound coronavirus bailouts, and his ‘New Deal’.

But though Boris was wooing working-class voters, he was equally set on the affection of those Conservatives who worry he has forgotten them.

It is a political balancing act almost as difficult as the economic one he faces.

But he managed it yesterday with Johnsonian flourish — and I say this as someone who has not always been his greatest supporter.

For he defiantly refused to apologise for his coronavirus spending spree or its political implications: ‘I am conscious it sounds like a prodigious amount of Government intervention — that is how it is meant to sound.’

Yet he also reassured his Tory detractors, and not just by assuring them he was far from a villainous Communist.

‘I believe it is the job of the Government to create the conditions of free enterprise,’ he insisted. No Conservative would quibble with that.

And there was more. ‘When I say levelling up I don’t mean attacking our great companies, I don’t mean impeding the success of London — far from it. Or launching a punitive raid on the wealthy.’

Then came an even bolder affirmation of Tory principles.

Just as it had been right to applaud NHS workers, the people who ‘made the NHS possible’ — in other words those who paid most in taxes — deserved a round of applause too: ‘innovators, wealth creators, capitalists, financiers’.

Many Tories will have gained as much comfort from the style of Johnson’s speech as from its content.

Though a little pale under the lights, he seemed as if he was back to Boris the Booster, the leader who won Brexit and an election landslide against the odds.

We all know Johnson has had a difficult few months.

There is no question he had his eye off the ball at the start of the Covid outbreak; errors were made in protecting the elderly; the disease nearly took his life and his ratings plummeted after the Dominic Cummings lockdown controversy.

Amid all that he became a father again at 55 and has been changing nappies. 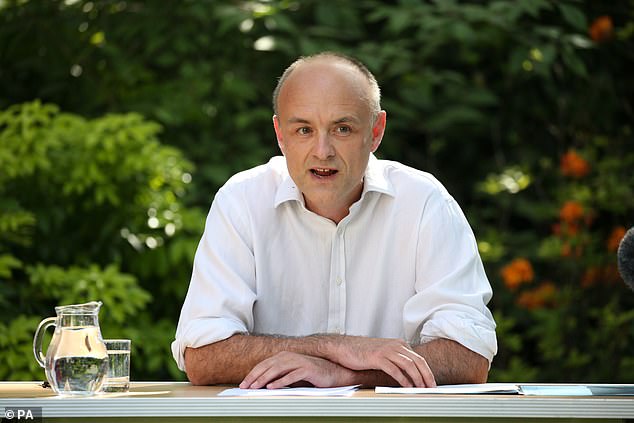 There is no question he had his eye off the ball at the start of the Covid outbreak; errors were made in protecting the elderly; the disease nearly took his life and his ratings plummeted after the Dominic Cummings (pictured) lockdown controversy

But there are unquestionably signs of new vim. He claimed at the weekend he is ‘as fit as a butcher’s dog’ and did press-ups on the floor of his Downing Street study to prove it.

Three days ago he said he was feeling so much better, that his police bodyguards had had to up their pace to stay level with him on his regular morning jogs. He has a new bounce in his step.

In one reflective moment in his speech yesterday, Boris acknowledged that at times the Government’s response to coronavirus was seen as being like a ‘recurring bad dream where you are telling your feet to run but your feet won’t move.’

He will be hoping desperately that, having announced a national recovery package, the bad dream is over and the economy will start running again.

Only then can he be assured of taking both the Red Wall voters and those increasingly alarmed Conservatives with him.