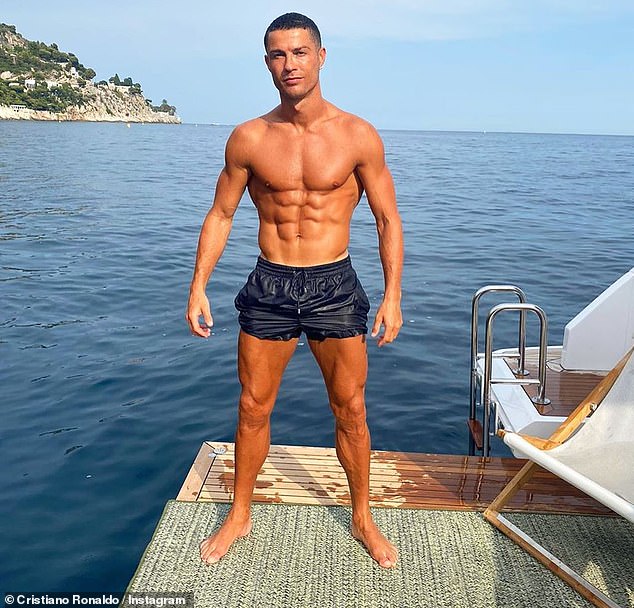 He is enjoying a sunkissed family break with his partner and four children.

And Cristiano Ronaldo displayed his incredibly chiselled physique during his holiday in Italy on Monday.

The football sensation, 35, revealed his abs of steel in a pair of tiny swimming trunks as he confidently posed on a £5.5 million yacht

Defined: Cristiano Ronaldo showed his insane washboard abs in water-soaked trunks as he posed for an Instagram snap from a lavish £5.5 million yacht in Italy on Monday

The handsome Juventus star appeared to be fresh from a swim as his brunette locks were worn slicked off his face.

Cristiano’s girlfriend, Georgina Rodriguez , 26,  also took to Instagram to pose up  a storm, as she lounged around in the summer heat sporting a make-up free look and Dior bucket hat.

The WAG put on a busty display in a crop-top as she posed for the camera. 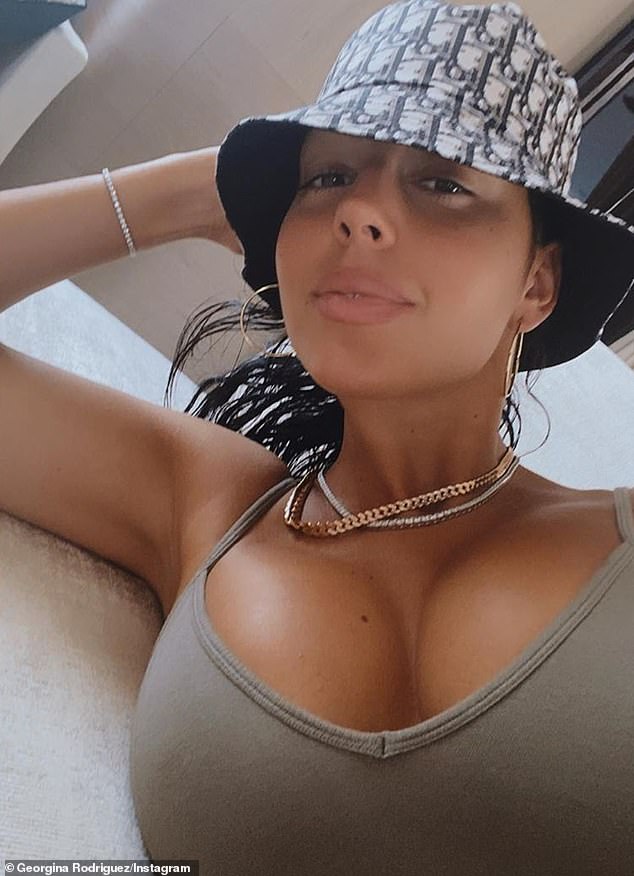 Bronzed perfection: Cristiano’s girlfriend, Georgina Rodriguez , 26, also took to Instagram to pose up a storm, as she lounged around in the summer heat sporting a make-up free look and Dior bucket hat

Later on in the day, she posted an adorable montage of the couple’s daughter Alana Martina, two, and Cristiano’s twins Eva and Mateo, three, as they played around in a rubber pool on board.

Georgina posed with her family for the heart-warming snap and was pictured wearing a jade green sculpted bikini. 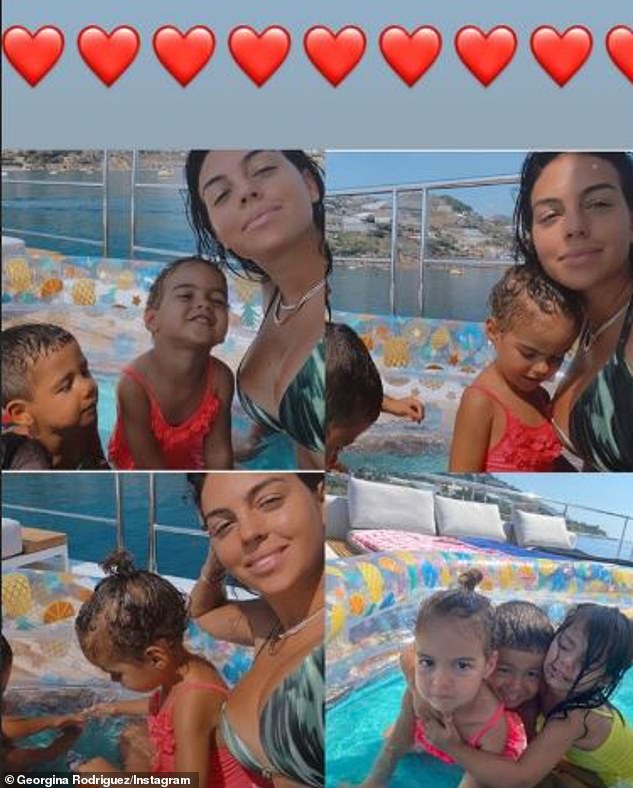 Pool fun: Georgina showcased her natural beauty as she posted an adorable snap of her family who hugged and played with each other in a rubber pool on their yacht decking 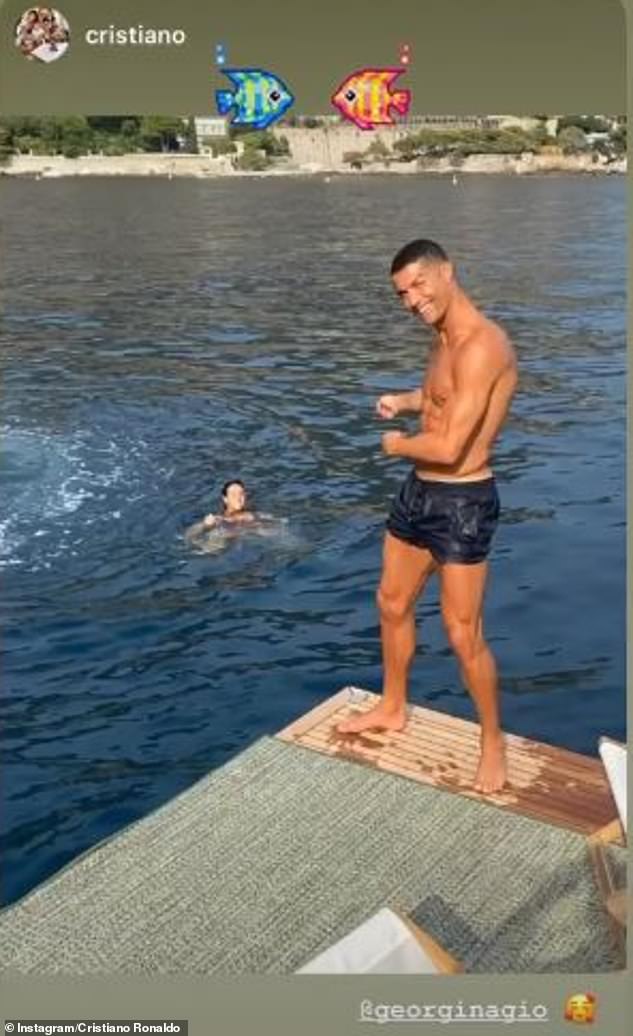 Quick dip: The WAG enjoyed a swim in the glorious sunshine as her athlete boyfriend pointed at her and gave a cheeky grin

In a later clip posted online, the brunette beauty joined her football lover for a dip in the water.

Cristiano Ronaldo Jr, 10, could not be seen in the snaps, but he is the oldest child of the father-of-four.

The athlete has never publicly revealed the identity of Cristiano Jr’s mother and maintains full custody of his eldest son. 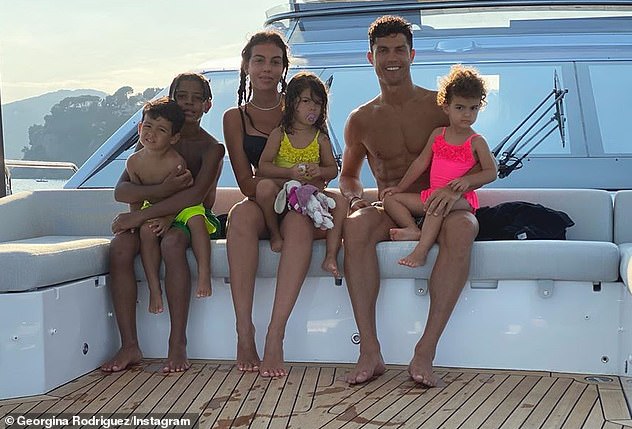 In 2017, he also became the father to his twins, Eva and Mateo via surrogacy in the United States.

His youngest child, Alana, was born on 12 November 2017 and is the biological daughter of Georgina who is a former shop assistant.

The pair met when Georgina was working at a Gucci store in Madrid in late 2019 and they have been inseparable ever since. 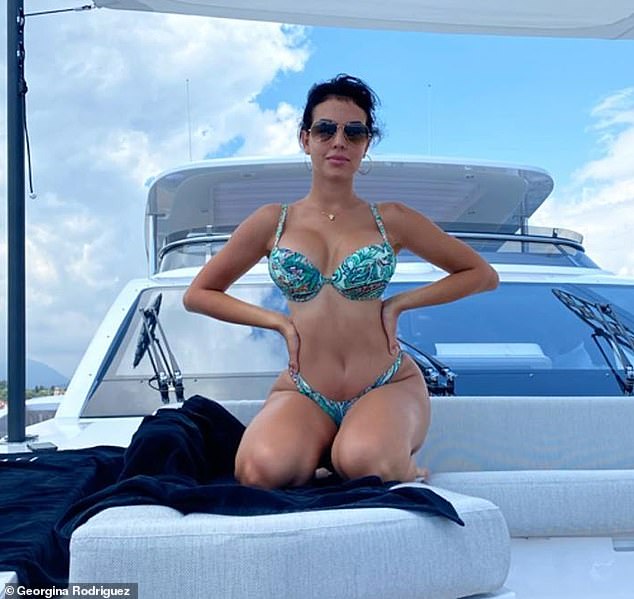 Brunette bombshell: Cristiano first met Georgina in the Gucci store in Madrid in 2016 and the couple have been an item ever since