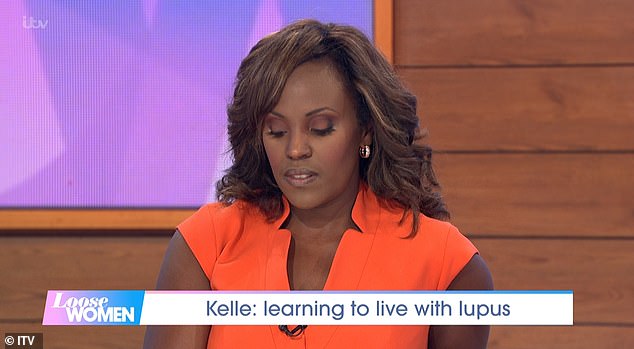 Kelle Bryan left her Loose Women co-stars in tears during Monday’s show as she spoke out on her twenty-year battle with lupus.

The singer and actress, 45, took part in a discussion on the ITV show about being in awe of oneself, explaining she’s proud of the way she has learned not to let lupus control her life.

Kelle explained it’s been a tough road physically and mentally, and left her co-stars emotional as she shared a clip of herself struggling to speak in 2016 after the chronic autoimmune condition led to an infection in her brain.

Tough: Kelle Bryan left her Loose Women co-stars in tears during Monday’s show as she spoke out on her twenty year battle with lupus

The video showed Kelle stammering and slurring her words, with the footage leaving her co-star Denise Welch in tears.

‘I didn’t know you then, I didn’t!’ Denise explained, while Kelle admitted the video was ‘hard to watch.’

‘I never watch it as I find it painful to put myself in that situation,’ she said. ‘But that’s me and that’s the affects of lupus. The reason I do it is because there is no awareness of lupus like cancer or other diseases. I am willing to share my story to help other people understand the effects of this disease.’

Kelle has been having regular truxima infusions which help her to manage her condition, as she explained: ‘I have one infusion every six months to keep the disease under control and it lets me lead an almost normal life.’ 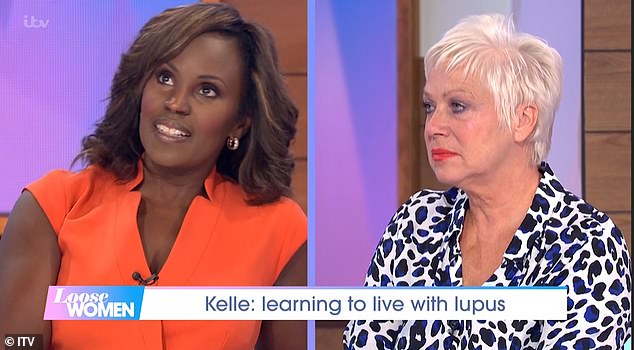 Emotional: Kelle left her co-star Denise Welch in tears s she shared a clip of herself struggling to speak in 2016 after an infection in her brain

It is one of the chronic autoimmune conditions, where the body makes antibodies against itself and starts to attack it. Lupus – Systemic Lupus Erythematotsus (SLE) – has a range of severity. Some sufferers will have only mild problems, others have life-threatening organ damage to the heart and the kidneys.

What are the symptoms?

Tiredness, joint pains and muscle aches. A common first symptom is joint stiffness, particularly in the mornings. Skin and hair problems are a major feature of SLE – a rash in the shape of a butterfly over the cheeks and nose is common, as is hair loss and sensitivity to the sun. Other problems include depression and lung and heart disease, as well as kidney inflammation.

What can it be mistaken for?

It is often mistaken for other joint problems such as rheumatoid arthritis which is also characterised by morning joint stiffness. It can also be misdiagnosed as a skin or blood disease.

How is it diagnosed?

If your GP suspects SLE they will request a blood test. The specific antibodies that attack the body can be measured in the blood. The diagnosis is made when there is the combination of typical symptoms and high antibodies.

Who is at risk?

SLE is ten times more common in women than men and usually develops between the ages 12 and 25.

What is the treatment?

Controlling the symptoms, as there is no cure, using anti-inflammatories and steroid tablets in more severe cases.

‘The day after my infusion last Friday, I went out on a run… I don’t want to allow myself to feel like a victim. I want to encourage other people, this is what works for me.’

‘I live with it and take control of it. Lupus is part of my life not all my life. I am not in awe of myself but incredibly proud of how I handle it.’

Kelle previously explained that she has suffered ‘arthritis symptoms, hair loss and ulcers’ as side effects of lupus. 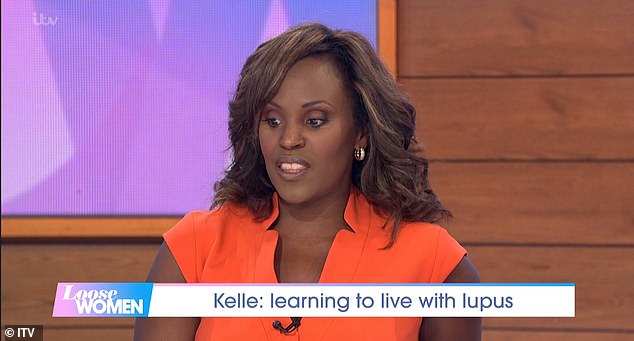 Treatment: Kelle has been having regular truxima infusions which help her to manage her condition, as she explained: ‘it lets me lead an almost normal life’

In 2016 she explained that the condition had progressed to a point where she couldn’t touch or interact with her own kids without protection.

The Eternal singer revealed that she had to wear gloves to touch her son Reegan and daughter Kayori, and that cuddling them could even be fatal.

The singer was first diagnosed with lupus after her girlband Eternal performed at Party in the Park in 1999.

A low point in life for the former Italia Conti student, the diagnosis coincided with her departure from pop group Eternal and her parents’ divorce. Lupus is often bought on by stress. 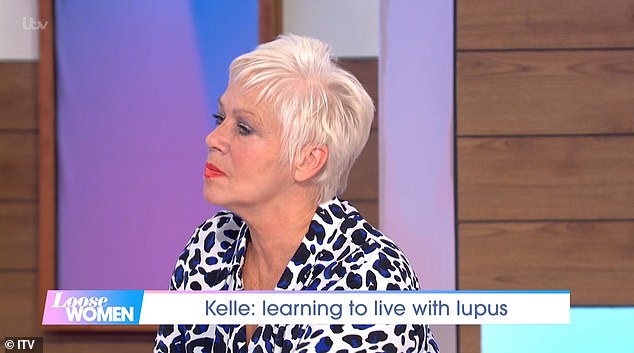 Support: ‘I didn’t know you then, I didn’t!’ Denise explained, while Kelle admitted the video was ‘hard to watch.’

Things took a more frightening turn in 2016 however, when the mother-of-two came close to death after contracting a virus that caused her organs to shut down.

Kelle explained to Loose Womena at the time that the ordeal first began when her daughter picked up a meningococcal virus at school – before the singer was rushed to hospital 48 hours later.

She recalled: ‘I was coughing up blood from a cold to pneumonia, because my child had this infection.’

Worryingly Kelle’s organs and kidneys began to shut down, so doctors were forced to administrate adrenaline to kick-start her body.

The lupus then spread to her brain, causing her to suffer a seizure and harrowingly lose three days of her life.

She continued: ‘I was awake and functioning but have no recollection of this time… then they realised I had lupus on my brain.’

Adding that the ordeal affected her mentally as well as physically, bringing on bouts of paranoia, she said of the disease: ‘It alters the way you think and function so you’re not really in control of your thoughts and the anxiety creeps up and up. 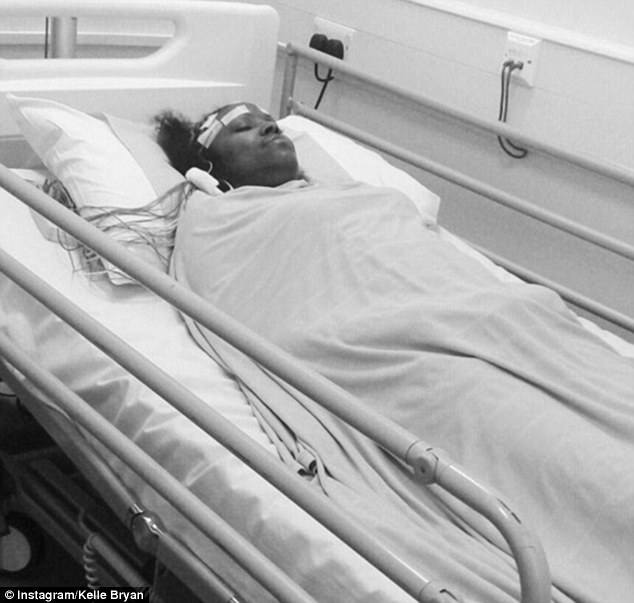 Suffering: Kelle, who rose to fame in pop group Eternal, has been suffering with Lupus since 1999 – and has revealed it now has serious repercussions on her family life