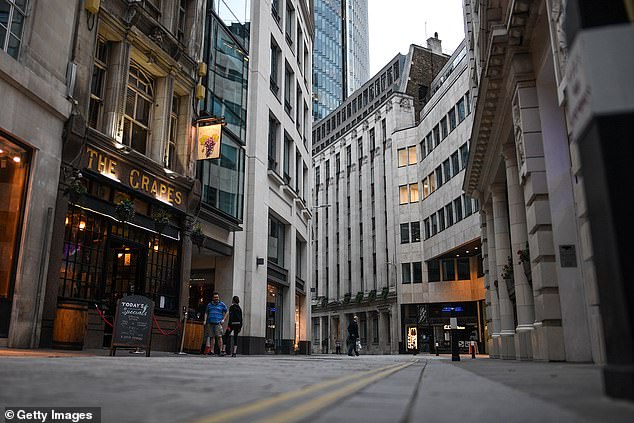 More than half of senior managers who drove to work before the coronavirus lockdown are still working from home, a new survey has revealed amid growing concerns for the UK economy.

A poll conducted by the AA found that some 54 per cent of professionals and senior or middle managers remain working from home for all or some of the time.

Meanwhile, four in 10 people (40 per cent) who normally commuted by car pre-pandemic are still working remotely.

The numbers were published after experts warned continued working from home could cost the UK economy almost £500 billion over the next four years.

The UK Government is increasingly concerned about struggling town and city centres.

Ministers are encouraging more workers to return to their offices in order to deliver a boost to businesses in urban areas which are reliant on commuter footfall.

Some in Whitehall believe civil servants should set an example to the rest of the country but George Eustice said this morning he does not have a target for the number of staff he wants back at their desks in his department next month.

The Environment Secretary said he wanted to ensure ‘as many people as possible are able to return to work’ – but that not everybody would be able to do so safely at the same time.

Ministers are increasingly concerned about empty town and city centres. Pictured is the City of London on August 26 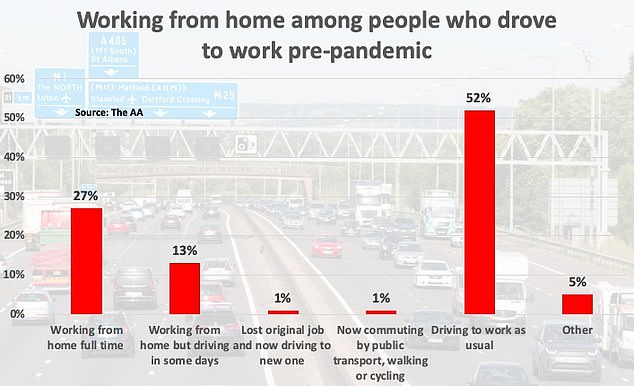 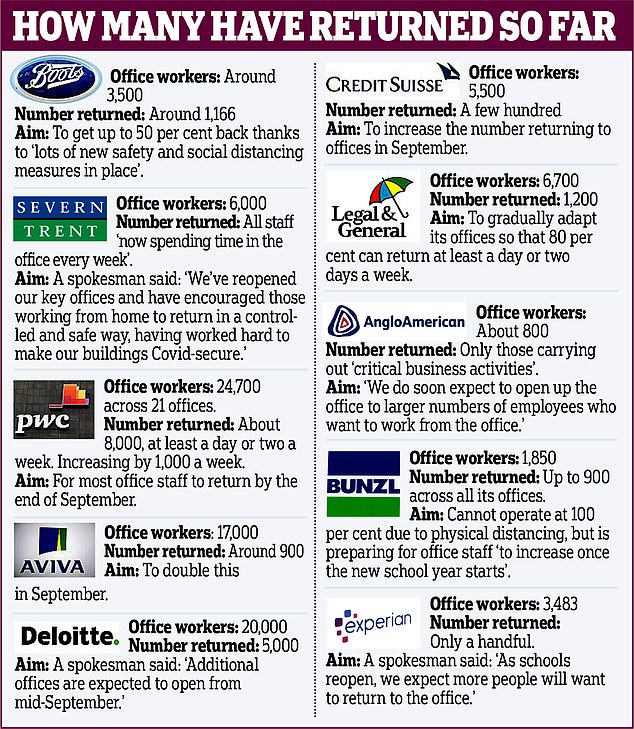 A new Daily Mail audit of 30 FTSE 100 and top firms, representing more than 150,000 employees, found some workers are returning to their desks

Safety chief: ‘No evidence’ returning to work is safe

The head of Britain’s leading health and safety charity today insisted there is ‘no evidence’ returning to the office is safe as he criticised the government for ‘bullying’ people to return.

Lawrence Waterman, chair of the British Safety Council, was asked on the BBC’s Today programme if there was evidence that returning to work was risk free.

He said: ‘I think that’s one of the concerns that many of us have got about how the government are putting out the advice about returning to work being safe. We simply don’t know.

‘We believe from the evidence that large gatherings of people… leads to exactly the kind of indoor environments that seem to be prone to the transmission of coronavirus, and there isn’t evidence that when you return large numbers of people you don’t get outbreaks.

‘I think many of us don’t understand why there’s such firm advice that workplaces are safe when there’s no evidence for that. Indeed, there is an argument that workplaces are so rarely inspected that it’s probably more likely that you’ll win the lottery than be visited by an inspector, so we’re bemused about where the evidence is.’

Mr Waterman pointed out that the government’s own Health and Safety Executive still advises on its website that ‘everyone who can work from home should do so’.

He added: ‘We don’t want ghost towns but it should be a matter for workers and employers to negotiate. Many do want to return to the office and many miss the camaraderie of working with colleagues. But it should be a choice that grown up workers and their employees should make.

‘We’re not in favour of the government bullying people. Schools are reopening this week in England, so many we should see how that settles down before forcing people back into offices.’

The AA survey, published by The Times, suggests ministers face an uphill battle to persuade some staff to go back to their desks.

The AA’s head of roads policy, Jack Cousens, told the paper there was ‘a big irony’ in politicians telling car commuters to get back to work while increasing pedestrian access by closing off roads – as has been seen in London.

The motoring association called for better transport options for commuters, while also criticising the decision to hike the central London congestion charge from £11.50 to £15.

Meanwhile, official figures for train numbers showed that at the start of last week passenger numbers were at 28 per cent of pre-lockdown levels.

It was a similar story on buses where passenger numbers were recorded at just 45 per cent of pre-pandemic levels.

Analysis for the Mail on Sunday suggested that almost half a trillion pounds could be wiped off the UK economy over the next four years if people fail to return to their offices.

Douglas McWilliams, the former chief economic adviser to the Confederation of British Industry, warned that if home working continues in its current form the economy will not return to its pre-pandemic size until 2025.

That would equate to approximately £480billion of lost output, or possibly even more.

Ministers have stepped up calls for employees to return to their workplaces next week.

Chief Secretary to the Treasury Stephen Barclay said yesterday the Government was ‘keen’ for people to stop working from home where possible.

Mr Barclay told Times Radio: ‘We are keen to get people back in the office. We think that’s best for the economy to get back to normal as part of our recovery.

‘The whole purpose of the furlough scheme has been to retain that link between the employee and their business.

‘Obviously, people coming back as the furlough scheme starts to unwind, back into the workplace in a more active way. So, we are keen to see that take place.

‘Clearly, these are conversations that businesses will be having with their staff.’

His Cabinet colleague Mr Eustice was asked during an interview on BBC Radio 4’s Today programme whether the Department for the Environment, Food and Rural Affairs had a target for staff returning after the bank holiday.

‘We don’t have a target other than to make sure that it is safe for people to return to work, and that does require, for instance, fewer work stations,’ he said.

‘So not everybody – we won’t get a 100 per cent return-to-work – but we want to ensure that as many people as possible are able to return to work, even if it’s for some days a week so you don’t have an entire team in everyday.

‘That’s the kind of approach we’ll be taking and it’s the sort of approach that I’m sure many other businesses will be too.’

A string of top firms last night revealed their staff were pouring back into the office, with others saying they are considering plans to lure workers from their homes.

The boss of recruitment giant Hays vowed there would be no ‘turning our back on the office’.

Yesterday it emerged Capita, one of the UK’s biggest employers, will become the first major British firm to pull out of city and town centres by closing nearly 100 offices. The Government contractor – which collects the BBC licence fee and runs the London congestion charge – is set to close more than a third of its 250 offices across Britain; its 45,000 UK staff will continue to work from home.

The news will be a major blow to Boris Johnson’s back to work campaign, which is expected to be launched this week.

Yesterday it also emerged that BP is planning to sell its central London headquarters as part of a permanent shift in working patterns.